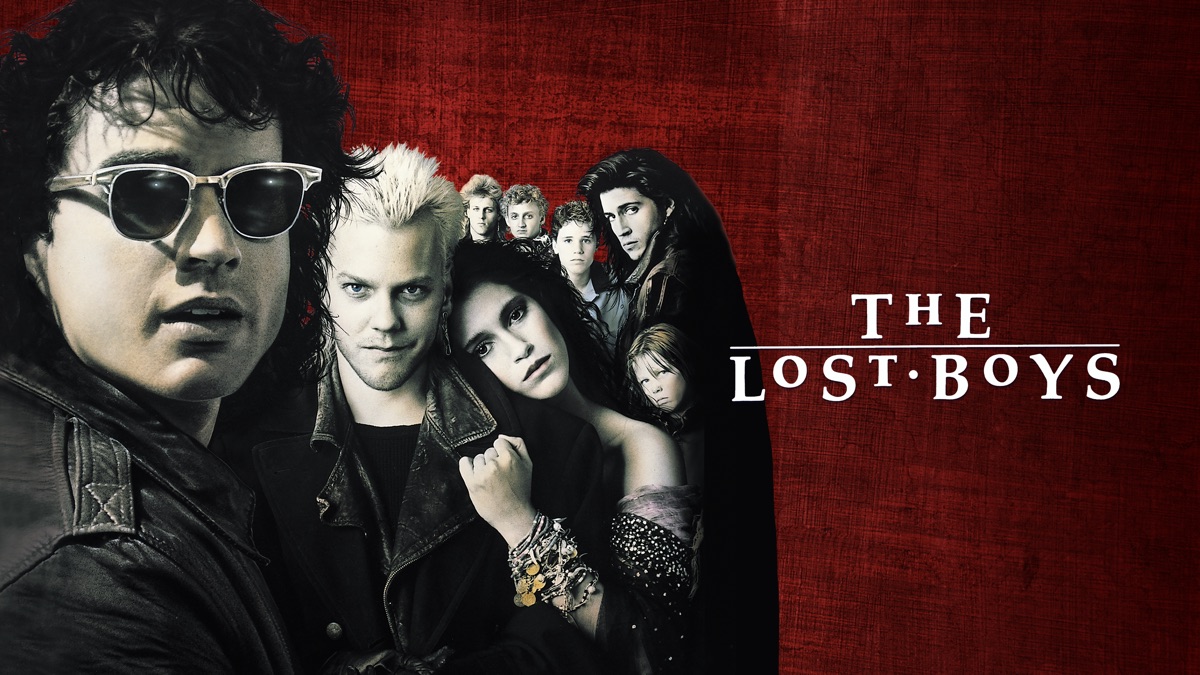 The Lost Boys was released by Warner Brothers on July 31, 1987, becoming a critical and commercial hit in theatres and later on home video, not to mention various Internet memes. It influenced such films as The Craft, which I wrote about previously, and has spawned two direct-to-DVD sequels: Lost Boys: The Tribe and Lost Boys: The Thirst. A reboot, which is in development, has recently been announced.

Opening Image (1): On the seaside boardwalk of Santa Clara, the eponymous Lost Boys, who look like they stepped out of a Mötley Crüe video, hassle a blonde. Her brutish boyfriend intervenes and a scuffle on a carousel breaks out. A security guard breaks it up and kicks the boys off the boardwalk. Later, some insidious flying things swipe up the security guard. Revenge for the carousel incident? It seems so…

Set-Up (1-10): The Emersons—Lucy (Dianne Wiest), Michael (Jason Patric), and Sam (Corey Haim)—arrive in Santa Clara. Sam says that it “smells like death.” Michael notices on the back of a billboard that it’s “The Murder Capital of the World.” Lucy is a recent divorcee in search of a new home and life for her and her sons. When they arrive at Lucy’s father’s house, he’s “playing possum” on the front porch. Many omens of death in the opening minutes.

Theme Stated (5): When Michael asks his grandfather (Barnard Hughes) about the billboard, the elder man says that if all the corpses buried in Santa Carla sprung up at once, they’d have one hell of a population problem. That’s the theme: the Emersons will be challenged by death. Will they survive as a family as a result?

Debate (12-25): The boyfriend and girlfriend who scuffled with the Lost Boys are “swept away” into the night sky. Two more Santa Carla deaths.

B Story (20): Sam encounters the Frog brothers again in the comics shop. They give him a horror comic, Vampires Everywhere, as a “survival manual.” Michael meets up with Star and wants to take her out. The Frog brothers are helpers to Sam, guides warning him of the dangers. Star, the love interest, is also a mythical Cassandra, cautioning Michael about the danger, but her words fall on deaf ears until it’s too late.

Debate (12-25) (con’t): The Lost Boys show up. David (Kiefer Sutherland) is the ring leader to Marko (Alex Winter), Dwayne (Billy Wirth), and Paul (Brooke McCarter). David challenges Michael to keep up with his motocross motorcycle. They head to the bluff—and in a Rebel Without a Cause moment, play chicken with who’s going to yield before going over the bluff into the jagged rocks and crashing into the waves below. Michael dumps his bike and punches David. It was a test, and Michael passed. The newest Santa Carla resident has what David was searching for.

Break into Two (25): Michael ventures into their underground lair, a ritzy hotel that took a header in a fault during an earthquake 80 years previous. Using powers of persuasion, David tricks Michael into drinking a wine bottle full of his blood. Star tries to warn him, but headstrong Michael will not listen—and enters the upside-down world.

Fun and Games (30-55): Lucy goes out on a date with her employer, Max. She asks Michael to babysit Sam. The Lost Boys show up and terrorize Michael and Sam with their roaring motorcycles outside, unsettling them. Transforming into a vampire, Michael fights his blood-lust urges and stalks Sam. Their Alaskan Malamute, Nanook, defends Sam, who then notices his brother’s reflection is vanishing in the mirror. He calls the Frog brothers. They say to kill Michael.

Lucy calls to check on the boys. Sam freaks out on the phone and his mother comes running. Michael tells Sam that he’ll handle it—don’t tell mom anything. Michael sneaks out to get answers in the Lost Boys’ cave. He finds Star there and they have a steamy montage of sex. Lucy takes a bottle of wine to Max’s house during the day. His German Shepherd, Thorne, brutally attacks Lucy, who barely escapes with her life.

Midpoint (55): At the comics shop, Sam figures out that everything happened after his mom met Max, raising the stakes. He must be the head vampire. If they destroy him, Michael, who’s only a half-vampire, can be restored. The Frog brothers agree, tying A and B Stories together and setting up the ticking clock.

Bad Guys Close In (55-75): Max arrives at the Emerson house. He only enters after Michael invites him in. The Frog brothers eat with Sam, Lucy, and Max. They perform a series of humiliating vampire tests using garlic, holy water, and mirrors. They fail, infuriating Sam’s mother and causing Max to leave. Strike out for Sam and his new vampire-hunting friends.

On the other side of town, the Lost Boys show Michael who they are—and he is—by attacking a bonfire group of surf Nazis. The vampires make short work of their victims, stacking their corpses up like cord wood onto the fire, which is now a funeral pyre. In keeping with their namesake of Lost Boys from Peter Pan, they must feed so they can stay young forever. Every vampire must feed to survive. The first time Michael does, he becomes a fully-fledged creature of the night.

All Is Lost (75): Sam, Michael, and the Frog Brothers venture to the Lost Boys’ cavern lair to stake them. Michael takes out Star and Laddie (Chance Michael Corbitt), a young boy who’s another half-vampire. The Frog brothers and Sam find the Lost Boys, hanging upside-down like bats deep in the bowels of the cavern. Alan Frog stakes Marko in the heart, killing him. David comes after Sam and his friends, they barely escape with their tails between their legs. David vows to come after them after sunset. The whiff of death is on the protagonists, and they’re worse off than they were at the beginning of the movie.

Dark Night of the Soul (75-85): Preparing for retaliation, Sam, Michael, and the Frog brothers prepare the house for the eventual bloodsucker home invasion. They pulverize garlic and steal holy water from a church, filling bathtubs and their squirt guns. Since Lucy won’t believe Sam, and grandpa is pretty much in his own taxidermy world most of the time, the boys cannot rely on the adults. Michael lies that gramps has a date with his widow friend. Lucy will be at Max’s. They are ready…

Break into Three (85): Michael and Sam have joined the Frog brothers, with Star and Laddie safe (for now) against the Lost Boys, crossing A and B Stories. It’s here they will live or die making their stand against the hair-metal nosferatus from hell.

Finale (85-110): With the Team Gathered, they Execute their Plan to fight as the vampires attack. The Frog brothers, with an assist from Nanook, dispatch Paul in the aforementioned bathtub, while Sam takes out Dwayne in a “death by stereo” moment with a bow and arrow. Now it’s only David and Michael. They duel, battling odds, but Michael prevails, impaling David on some deer antlers in a Salem’s Lot callback. The High Tower Surprise occurs when the puzzled boys learn that David wasn’t the head vampire. Nothing has changed! But Max rolls up with Lucy, revealing just that—he’s the head vampire and he wanted to bring his boys and Lucy and her boys into the vampiric fold as a kind of “bloodsucking Brady Bunch.” Digging Down Deep, the boys fight Max, but he’s too strong. Then he takes Sam hostage. He’ll kill him if Lucy doesn’t yield. She agrees. However, an unexpected Execution of the New Plan happens as grandpa miraculously shows up. Some sharpened fence posts on his truck fly off after it crashes into his house—one impales Max, destroying him. Star, Laddie, and Michael are all restored to their human selves.

Final Image (110): The family is whole again, stronger. They survived by working together. Lucy’s oddball father wanders to the refrigerator grabbing one of his root beers, admitting: “One thing about living in Santa Carla I never could stomach… all the damn vampires.” Though he seemed like a crazy coot in his own world, he knew about the vampire mess all along. Womp-womp!

See other Monster in the House Beat Sheets>>

Beat Sheets, Novel Writing, Out Of The Bottle