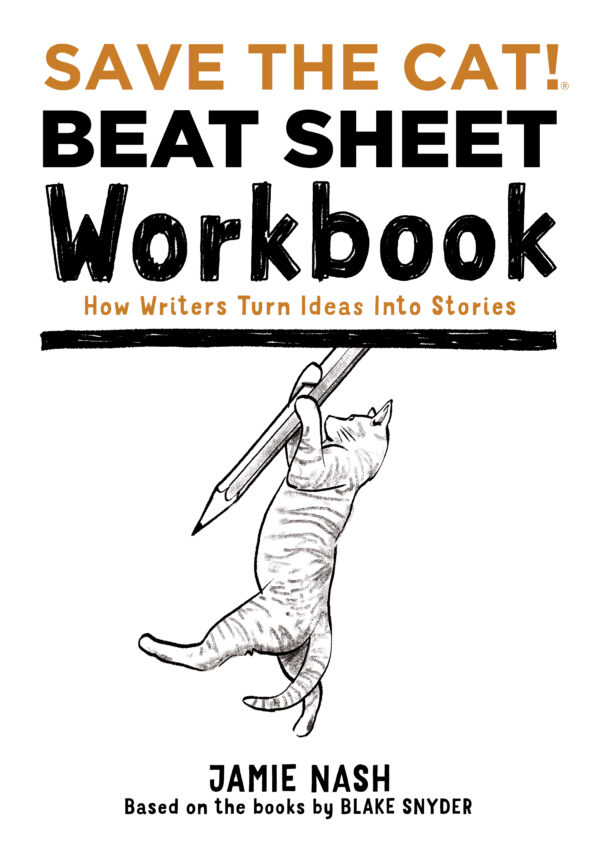 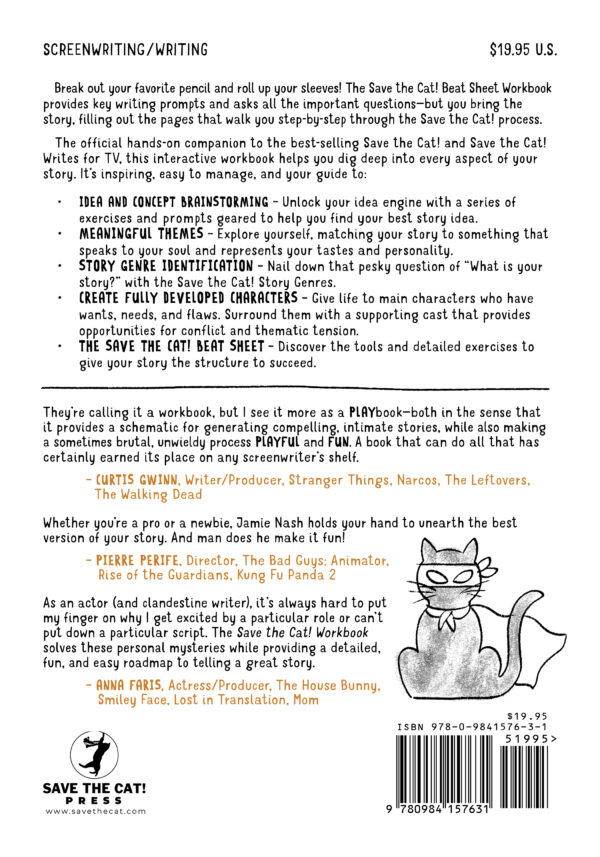 Save the Cat!® Beat Sheet Workbook: How Writers Turn Ideas Into Stories

Break out your favorite pencil and roll up your sleeves! The Save the Cat! Beat Sheet Workbook provides key writing prompts and asks all the important questions—but you bring the story, filling out the pages that walk you step-by-step through the Save the Cat! process.

The official hands-on companion to the best-selling Save the Cat! and Save the Cat! Writes for TV, this interactive workbook helps you dig deep into every aspect of your story. It’s inspiring, easy to manage, and your guide to:

PRAISE FOR SAVE THE CAT!® BEAT SHEET WORKBOOK

They’re calling it a workbook, but I see it more as a PLAYbook—both in the sense that it provides a schematic for generating compelling, intimate stories, while also making a sometimes brutal, unwieldy process PLAYFUL and FUN. A book that can do all that has certainly earned its place on any screenwriter’s shelf.
– Curtis Gwinn, Writer/Producer, Stranger Things, Narcos, The Leftovers, The Walking Dead

Whether you’re a pro or a newbie, Jamie Nash holds your hand to unearth the best version of your story. And man does he make it fun!
– Pierre Perifel, Director, The Bad Guys; Animator, Rise of the Guardians, Kung Fu Panda 2

As an actor (and clandestine writer), it’s always hard to put my finger on why I get excited by a particular role or can’t put down a particular script. The Save the Cat! Beat Sheet Workbook solves these personal mysteries while providing a detailed, fun, and easy roadmap to telling a great story.
– Anna Faris, Actress/Producer, The House Bunny, Smiley Face, Lost in Translation, Mom

I’m a fan of anything that stretches my writing brain and pushes me to approach things in a new way. This workbook does that while making it feel like a fun game.
– Sanjay Shah, Writer/Producer, Fresh Off the Boat, King of the Hill

You’ll be impervious to writer’s block with this workbook, which gives you permission to think about your idea before you write.

The Save the Cat Beat Sheet Workbook should be prescribed to writers as a stress reliever. It will save you time, reduce headaches, and keep you from smashing your computer in frustration when your ideas aren’t building because it provides you with the tools to work out and write your strongest stories.
– Michael Olmo, Associate Story Editor for WGBH KIDS; development deals with Battat Entertainment, Disney Jr., and Time Studios

These low-key, bite-size exercises are essential tools to consistently build a sustainable concept. And whenever you get stuck, need a fresh perspective, or want to best your latest draft (that people like but for some reason don’t yet love), Jamie Nash’s strategies deliver a route not only to improvement but also to a new way of seeing your work.
– Sheila Hanahan Taylor, Co-Founder, Practical Pictures. Past projects include the American Pie and Final Destination franchises, Breaking In, and Repli-Kate. Sheila also mentors at the Film Independent Episodic Lab, ran the Fox TV Writers Lab, and has been an instructor at UCLA Film School for over 20 years.