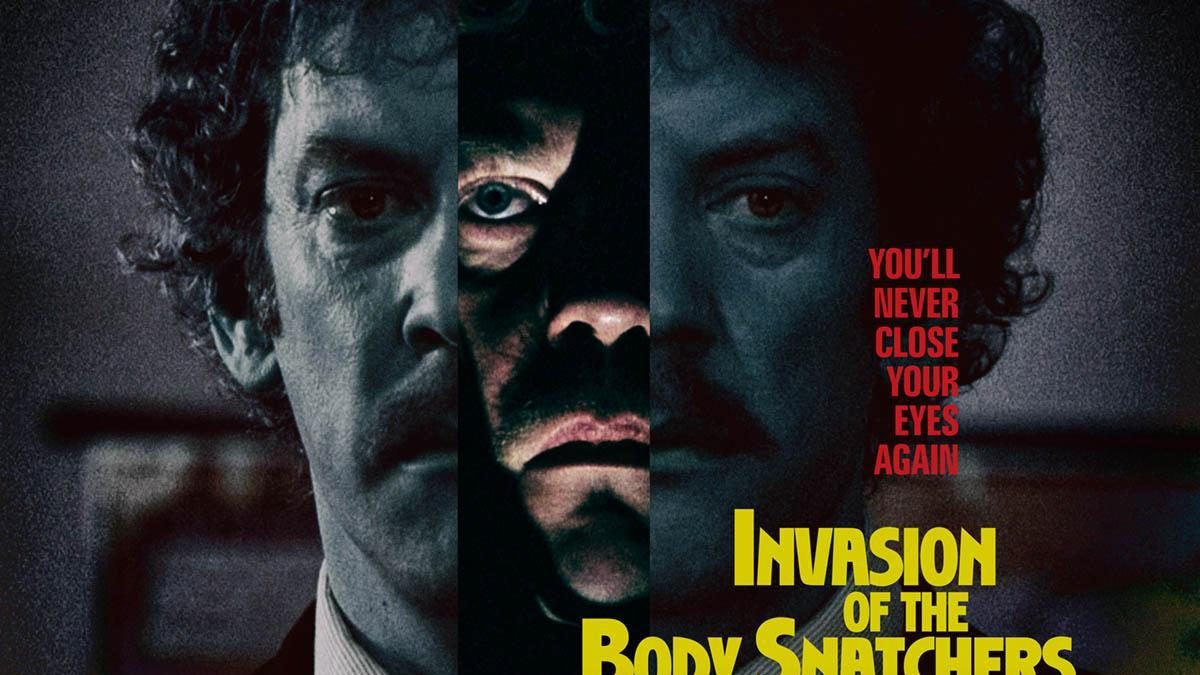 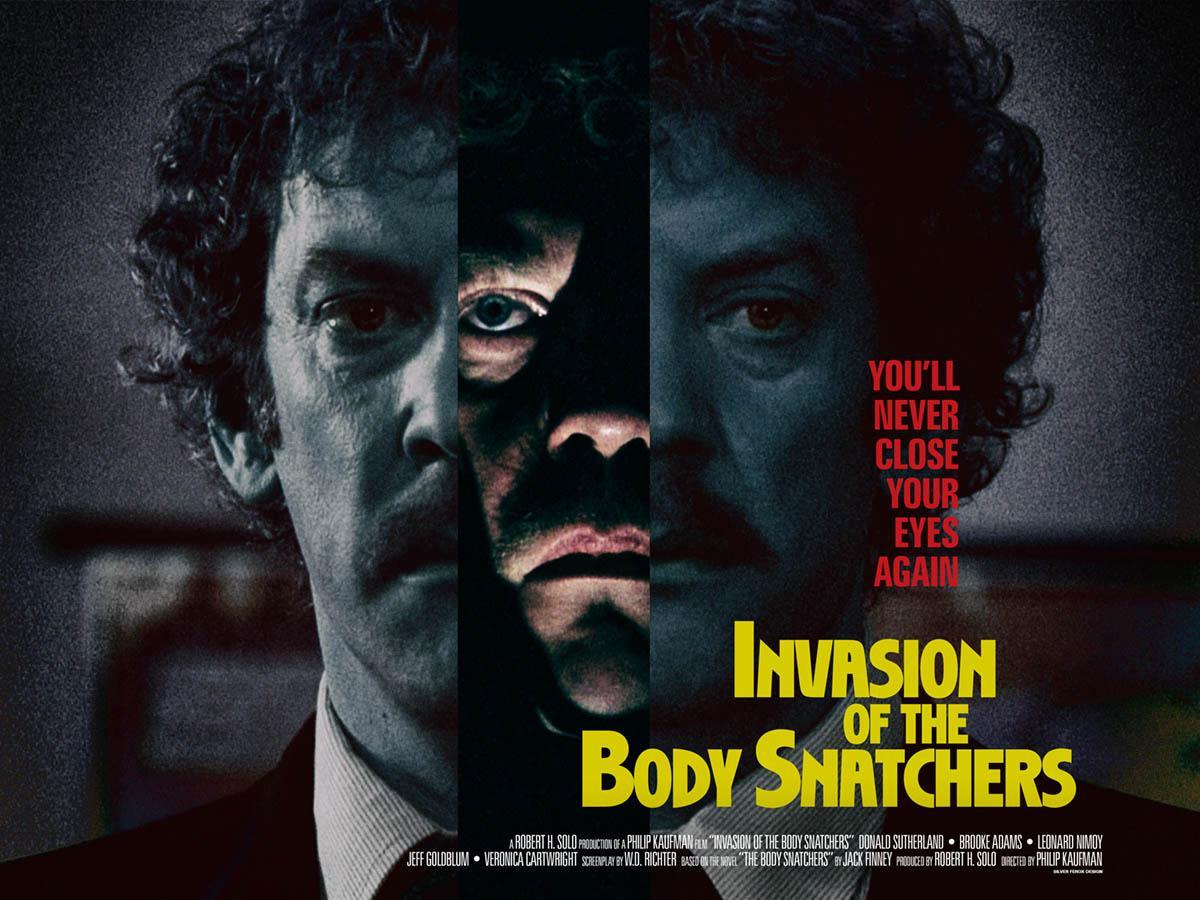 The 1978 version released through United Artists featured an all-star cast with apt direction from Philip Kaufman, cinematography from Michael Chapman, an atmospheric score by jazz musician Denny Zeitlin, precision editing by Douglas Stewart, and of course a well-adapted screenplay by W.D. Richter.

The film tapped into the post-Vietnam and post-Watergate fears of not trusting what those higher ups, city and federal government, are telling us, as well as the fallout from such self-help pop movements as I’m OK, You’re OK, urban dwelling alienation, the 1970s energy crisis, and the ‘70s paranoia thrillers like The Conversation, All the President’s Men, The Parallax View, The Day of the Jackal, Marathon Man, and Three Days of the Condor.

Pauline Kael said of Invasion of the Body Snatchers at the time of its release: “It may be the best kind of its film ever made.” She’s not wrong.

Screenplay by: W.D. Richter
Based on the novel: The Body Snatchers by Jack Finney
Directed by: Philip Kaufman

Opening Image (1): On a remote, dying world, a colony of gelatinous beings depart their planet, soar through the cold reaches of space, enter our solar system, and travel toward our big, blue marble. Coming down through the rain, the viscous creatures form into seed pods on flora with bright pink flowers…

Set-Up (1-12): … and Elizabeth Driscoll (Brooke Adams) plucks one and takes it home, along with several school children, led by a suspicious-looking teacher. (Note the cameo of Robert Duvall as a Catholic priest on a swing set.) Elizabeth takes the attractive pod to her San Francisco townhouse. She tells her boyfriend, Dr. Geoffrey Howell (Art Hindle), that it’s a “grex,” which is a rare hybrid of two separate species, and an aggressive one that immediately takes root in a glass of water. Across town, Matthew Bennell (Donald Sutherland), a city health inspector, makes enemies at a snooty French restaurant when he uncovers rodent droppings.

Catalyst (13): When Elizabeth wakes up in the morning, she discovers the happy and animated Geoffrey to be acting reserved and strange (he slept with the pod on his side of the bed in a glass of water).

Theme Stated: She watches her tight-lipped partner take something in a trashcan to a garbage truck. Inside the truck are the husks of what were once humans. This suggests the deeper theme of the story: Do we really know the people we know? Or, you know, the more paranoid version: they’re out to get you.

Debate (14-28): Elizabeth confides in her San Francisco Health Department co-worker, Matthew, about Geoffrey’s behavior. She’s followed him around all day and he’s been having strange meetings with strange people. It’s worth noting how Philip Kaufman ratchets up the urban tension and paranoia without really showing anything, which is masterful.

And here are the three essential elements that make this a Monster in the House: the Monster is an invasive alien species that invades the House—in this case, Earth—and the Sin is no one is listening. Those who say that something is happening to authority figures are being written off as crazy, hysterical, or overly dramatic.

B Story (20): There’s the hint of an ill-fated love story between Matthew and Elizabeth, who share a mutual respect for one another and an unspoken mutual affection, too. They will have to rely only on each other through the course of the story.

Debate (14-26) cont’d: Matthew suggests they meet his friend, author and psychiatrist Dr. Kibner, to sort things out. When Matthew takes his shirts into a Chinese laundry, he hands the shirts to the woman who works there with her husband. The husband pulls Matt aside as he’s leaving and says, “That’s not my wife.” It’s the first instance, besides what Elizabeth said, where Matthew starts hearing the growing problem and it seems to corroborate Elizabeth’s frustration.

Back outside, Matthew walks past a garbage truck full of “husks,” not seeing them. The situation is too irrational for a rational mind. Elizabeth talks of a big, secret conspiracy. Maybe, in this case, she’s right?

Break into Two (26): Elizabeth doesn’t show up to work, and when she does, she’s terrified. Matthew comforts her and decides to take her to see his friend, Dr. Kibner, to see if he can help. The Break into Two is the beat that says “yes” to the Catalyst.

Fun and Games (27-55): Matthew and Elizabeth arrive at the gathering of Dr. David Kibner (Leonard Nimoy), a pop psychologist who’s entertaining a store party for his latest self-help book. Other people are complaining about Elizabeth’s plight. Also there is Jack Bellicec (Jeff Goldblum) who thinks Kibner is a quack and everything is a conspiracy.

Dr. Kibner takes Elizabeth aside and tries to convince her she’s trying to find an excuse to break off the relationship with Geoffrey, and that he’s had six patients telling him nearly the same thing. He says there is some kind of “hallucinatory flu” going around. He calms Elizabeth down and has Matthew take her home.

Jack Bellicec returns to the Bellicec Mud Baths with his wife, Nancy Bellicec (Veronica Cartwright), who runs the business. She deals with curmudgeonly customers, and one who doesn’t seem like himself. In fact, she thanks him for the plant he gave her. Jack takes a nap, and as he does, the pod in the next room begins to transform, taking on his characteristics.

Fearing Elizabeth is in danger, Matthew returns to her townhouse and rescues her from Geoffrey, who’s overseeing a duplication of her. He takes her back to his place.

Midpoint (55): False Defeat. Matthew calls the police on Geoffrey and the body of Elisabeth is discovered, tying A and B Stories together. This is a going public moment. However, the body is gone. The one at the Bellicec Mud Baths has vanished too. It seems the police are in on it, which raises the stakes and starts the ticking clock. It’s only a matter of time before the pod people close in.

Bad Guys Close In (55-70): The next morning, at Matthew’s apartment, Matthew, Elizabeth, the Bellicecs, and Dr. Kibner all try to make sense of the chaos that’s happening with the vanishing bodies. Elizabeth has figured out that people are being duplicated. Kibner still believes they’re being irrational, and then we learn why—he’s one of the pod people working with Geoffrey. He’s the one responsible for ditching the body at the Bellicec Mud Baths. And in effect, the pop psychiatrist has been gaslighting people to their own detriment.

The frantic group also figure out it’s the pink flower pods, the “space flowers” which are growing like parasites on other plants, that are the cause. Matthew looks into the epidemic, making many calls, and gets nowhere. The ones in charge are covering it up.

All Is Lost (70): That night, the Bellicecs and Elizabeth join Matthew back as his apartment. Dr. Kibner suggests they all get sleep, of course, because that’s when the pods get you. Matthew falls asleep in his garden, and his duplicate begins to grow—finally showing us the entire, disgusting process. Pods of Elizabeth and Jack grow as well, while they’re asleep. They’re at the worst point.

Dark Night of the Soul (71-88): Nancy, the only one not sleeping, awakens Matthew. The others wake up too. Matthew calls the police. They’re onto him. A group of pod people close in on them. They have to run. They manage to evade the pods but not for long. It seems the entire city is after them. Split from the Bellicecs, Matthew and Elizabeth are on their own, running for their souls. They return to the Department of Health to hide. They share a kiss, tying A and B Stories together. They take speed to stay awake.

However, they’re discovered by Dr. Kibner, Jack (who’s now changed), Geoffrey, and some others. Kibner gives them a sedative so they’ll go to sleep. The doctor explains that after they change, there will be no more anxiety, hate, or love—they’ll live in an untroubled world. Matthew kills Jack, stabbing the back of his head with a handful of darts. They lock Kibner in a freezer.

As they’re escaping the surrounded building, they run into Nancy Bellecic. She says the pods can be fooled if you don’t show any emotion. The three walk among the pods undetected until Elizabeth sees a homeless man and his dog who have crossbred due to a damaged pod, and she screams, revealing her humanity. Matthew and Elizabeth are separated from Nancy again.

Break into Three (98): Matthew and Elizabeth manage to escape in a truck. They’re together, even sharing that they love each other.

Finale (99-110): Gathered as a Team, Matthew and Elizabeth arrive at a warehouse where the pods are being harvested—and shipped city and worldwide. They plan to Execute the Plan, to destroy the pods, which seems impossible, or to escape. A ship arrives, and Matthew checks it out, leaving Elizabeth.

A High Tower Surprise occurs when Matthew returns to find Elizabeth’s body disintegrating in his hands, and a new one, her pod form, now alive. Digging Down Deep, Matthew escapes into the warehouse, and Executing the New Plan, he pulls a fire axe, using the blade to chop the suspension cords to the grow lamps. They fall, burning up the pods. The pods come after Matthew, but he manages to escape. One pod mentions that Matthew will have to sleep eventually.

Final Image (110): The next morning, Matthew returns to the Department of Health. Elizabeth is there… all of them are… as pods. Matthew seems to be doing his pod pantomime well. When he’s walking around outside, Nancy Bellicec meets up with him, happy. Her joy is short lived when Matthew reveals himself as a pod—shrieking at her.

Announcing the 2022 Save the Cat! Screenplay Challenge