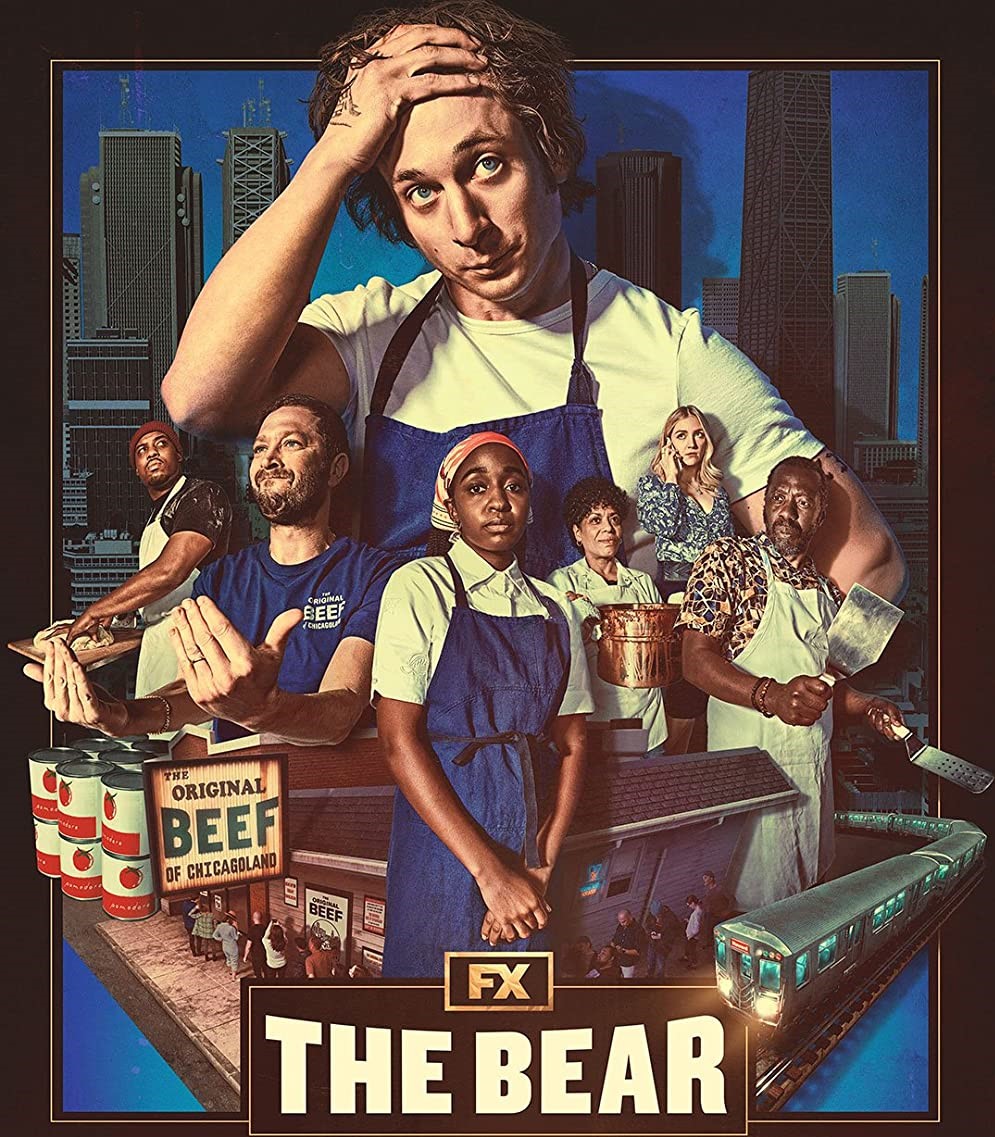 See how the pilot of The Bear hits Blake Snyder’s 15 story beats!

Written and Directed by: Christopher Storer

Set-Up: There are plenty of things that need fixing in Carmy’s life. After his brother Mike died, Carmy has inherited his family’s restaurant, The Original Beef of Chicagoland. It’s a far cry from what he is used to; it’s filthy and unorganized. Having been considered one of the top up-and-coming chefs of fine dining, Carmy has inherited the restaurant as well as all its debts, staff, and other problems.

It’s a clash of cooking cultures as Carmy realizes that for him and the family restaurant, it’s stasis = death unless he does something new soon. He wants to bring about change and elevate The Original Beef, but the staff is used to their own system, and as we get to know each of them in turn, we discover that they are going to be hard eggs to crack. And the icing on the cake: not enough meat was delivered for the week.

Theme Stated: Just as Carmy is about to unplug a noisy arcade machine, cook Tina (Liza Colón-Zayas) stops him. She tells him that if he unplugs it, it will never work again. These words refer to something deeper for Carmy, though: if he gives up on who he is and conforms to the sandwich shop, he’ll lose himself in the process.

Catalyst: Knowing that the restaurant is in need of cash, Carmy opens the arcade machines, finding a lot of money.

Debate: As Carmy races across town to obtain enough meat, he tries to prepare for the day’s service. He posts online that the restaurant will host a tournament for the arcade game Ballbreaker. It’s an attempt to generate business, inviting participants to come, play, and eat.

Break into Two: Soon, Sydney (Ayo Edebiri) arrives, hired to help as the stagiaire. She, too, is overqualified for working at The Original Beef, but her hiring represents Carmy’s way of beginning to change the restaurant’s culture.

B Story: While the first episode doesn’t specify one solitary B Story, it hints at subplots with many of the different characters and their arcs during the course of the season. It can be argued that each of them will have an impact on Carmy’s story, and vice-versa.

Fun and Games: Richie (Ebon Moss-Bachrach), Carmy’s brother Mike’s business partner, arrives. He hasn’t been happy with how Carmy has been running things, and he lets everyone know it, challenging him publicly. The promise of the premise is seen as Carmy tries to make changes but faces opposition the whole time. He insists on calling everyone “Chef” as a sign of respect, but everyone laughs it off.

As Sydney works to cook the “family dinner” for the employees, Richie and Carmy argue in the walk-in freezer. The fighting continues in front of the staff as Carmy refuses to continue serving spaghetti, saying that it doesn’t make sense to have it on the menu.

Midpoint: With three hours left until open, time clocks begin to tick. Richie insists on following the system they have always used, and Carmy points out that the stakes are raised by noting that if the system were so good, why is Richie barely able to pay the staff? He takes a stand, firm in his convictions, but it’s a false victory.

Bad Guys Close In: As the time for the tournament draws closer, both internal and external bad guys threaten to undo all that Carmy is trying to accomplish. He gives the other chefs advice on how to cook more efficiently, but is only met with resistance. Richie won’t back off, and Carmy is continually reminded of his brother’s death. His internal bad guys surface, brought out in a conversation with his sister, Sugar (Abby Elliott). When he finishes cooking his new sandwich for the menu, the rest of the staff tries it, admitting that it is delicious. Outside, an unruly crowd lines up for the arcade tournament as the staff enjoys family dinner together inside.

All Is Lost: When the crowd members begin pounding on the glass, Carmy goes out to quell the masses, though Richie refuses to help him. As Carmy tries to talk to the people in line, they begin to harass him, and a fight breaks out. The whiff of death is felt as Carmy realizes he might be in over his head.

Dark Night of the Soul: Richie comes outside, firing a gun into the air. He takes control of the situation, and Carmy is faced with his Shard of Glass: he might have great ideas, but sharing his talent and experience doesn’t mean that he can’t learn from others. Richie orders Carmy to do things the way they had always done them, and to cook the spaghetti.

Break into Three: Dejected and defeated, Carmy heads back inside the restaurant, unsure of his role in managing The Original Beef.

Finale: As Carmy prepares the meal, Richie finds the new sandwich and takes a bite out of it, realizing how good it is. Meanwhile, pastry chef Marcus (Lionel Boyce) tells Carmy that he had followed Carmy’s advice for cooking better bread, and it worked. It’s a high-tower surprise for Carmy as Marcus reciprocates and finally calls Carmy “Chef.” This forces Carmy to dig, deep down, and realize that he is bringing value to the restaurant, having witnessed the whiff of change. He was in danger of “unplugging” his talents, but he’s now more determined than ever.

Final Image: As Carmy tosses the spaghetti sauce into the trash, he is symbolically “releasing the bear.”

See the Beat Sheet for The Bear Season 1>>

Learn how to beat out YOUR TV pilot and series>>

About the Beats, Genre, Success Stories

Can Your B Story Be a Buddy Love, While Your A Story Is Another Genre?