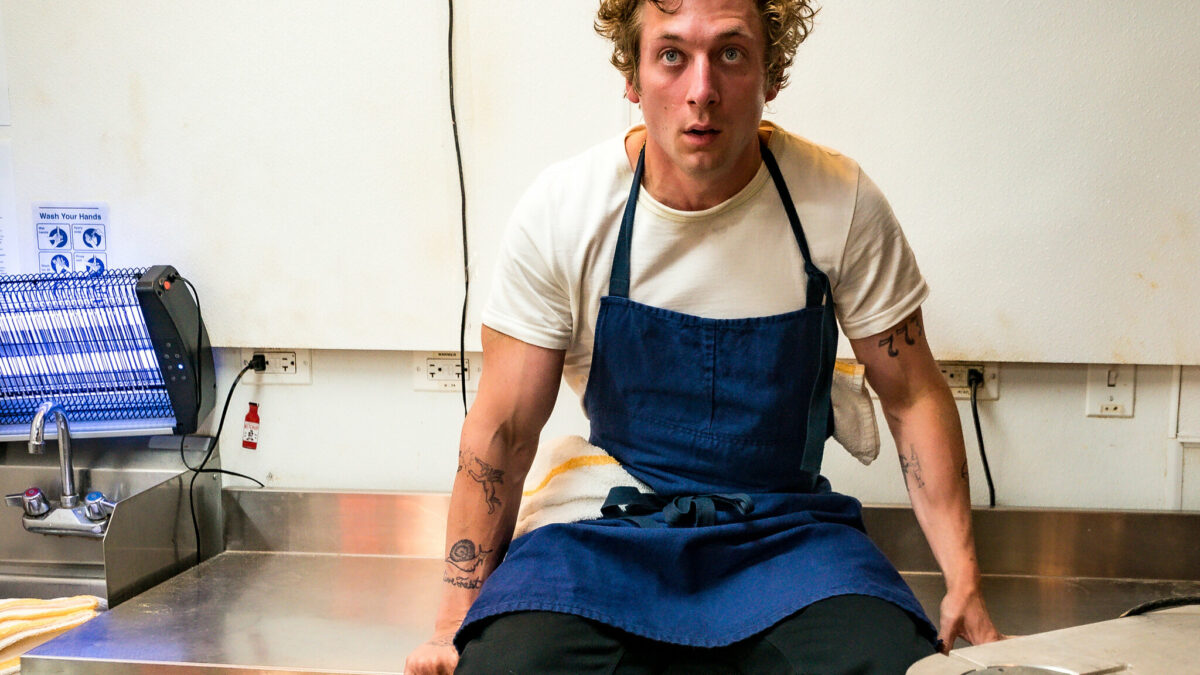 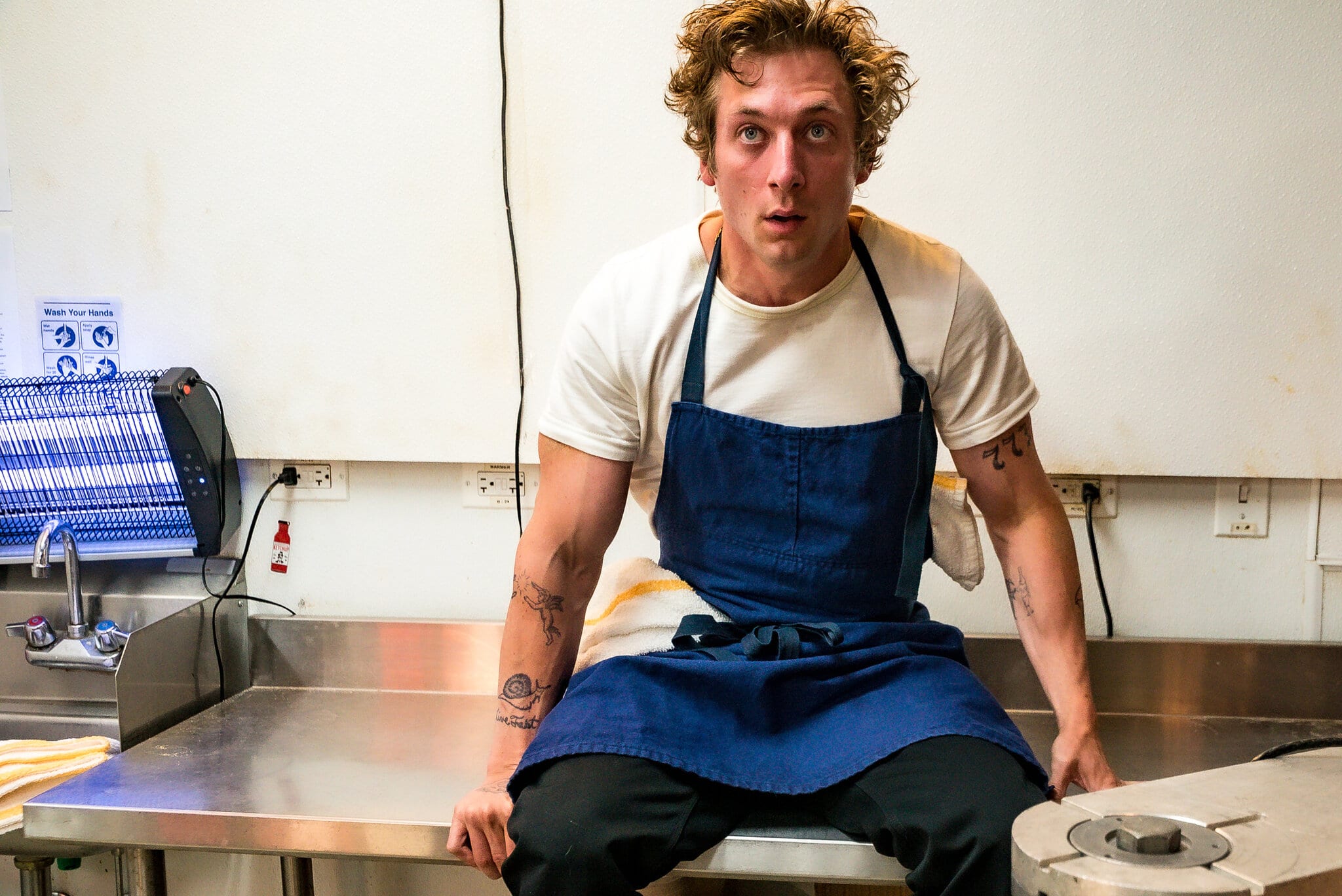 See how the first season of The Bear hits Blake Snyder’s 15 story beats!

Opening Image: Carmy “The Bear” Berzatto (Jeremy Allen White) stands alone on a moonlit bridge in Chicago. Crouching, he approaches a cage and opens it, releasing a bear.

Set-Up: There are plenty of things that need fixing in Carmy’s life. After his brother Michael died, Carmy has inherited his family’s restaurant, The Original Beef of Chicagoland. It’s a far cry from what he is used to; it’s filthy and unorganized. Having been considered one of the top up-and-coming chefs of fine dining, Carmy has inherited the restaurant as well as all its debt, staff, and other problems. It’s a clash of cooking cultures as Carmy realizes that for him and the family restaurant, it’s stasis = death unless he does something new soon.

Theme Stated: Just as Carmy is about to unplug a noisy arcade machine, cook Tina (Liza Colón-Zayas) stops him. She tells him that if he unplugs it, it will never work again. These words refer to something deeper for Carmy, though: if he gives up on who he is and conforms to the sandwich shop’s ways, he’ll lose himself in the process. In this season, Carmy will have to fight to stay true to what he believes. Will he become a part of the group, the institution of the restaurant?

Catalyst: Carmy’s Catalyst for the season is when he makes the choice to change the way things are done at The Original Beef. He wants to elevate the restaurant as he tries to balance the books and make payments on time. His season-long goal will be to bring about this change.

Debate: Throughout the first episode, we witness Carmy struggle to get the other chefs to follow his lead, including calling each other “chef” as a sign of respect. He knows what will be best for the restaurant, but the others are used to their own system, choosing instead to follow the orders of longtime restaurant manager Richie (Ebon Moss-Bachrach). The newly-hired stagiaire, Sydney (Ayo Edebiri), sees Carmy’s vision, but she’s looked down on by the others.

Break into Two: At the end of Episode 1, pastry chef Marcus (Lionel Boyce) admits that he followed Carmy’s advice, and finally calls him “chef.” It’s the whiff of change as it empowers Carmy and makes him realize that he shouldn’t give in to the “usual way” of doing things, that he should fight the old system. As he tosses the spaghetti in the trash, it symbolizes his bold step into the upside-down antithesis world.

B Story: Each character in the season has a rich arc, and all have lessons to teach Carmy, and vice-versa. In particular, Richie’s opposing management methods, and the friendship he shared with Carmy’s brother, will have a strong impact on Carmy when All Is Lost for him.

Fun and Games: In the ensuing episodes, the promise of the premise is revealed when a world-class chef tries to reform a struggling family restaurant. Carmy continues to try and get the other chefs to join his side and work with him rather than against him. When the health inspector gives the restaurant a C rating in Episode 2, it’s another blow. Carmy begins learning more about how the restaurant has been mismanaged, including the fact that his brother had borrowed $300,000 from their uncle, Cicero (Oliver Platt).

While Cicero offers to buy the restaurant, Carmy refuses to sell it, insisting on paying the money back. In an attempt to understand his brother’s addiction problems, Carmy attends an Al-Anon meeting in Episode 3. He implements a new Brigade de cuisine system, giving each chef a specific role to focus on, while also putting Sydney in charge of the veteran employees. Although full of passion, Sydney struggles to connect and gain the respect of the rest of the staff. Eventually, however, the staff members begin to adapt to the new system.

Midpoint: When Carmy and Richie cater a children’s birthday party for Cicero in Episode 4, the punch accidentally becomes spiked with Richie’s antidepressant, causing the children to fall asleep in the middle of the yard. Rather than become angry, Cicero finds humor in the situation. He and Carmy have a heartfelt conversation about Carmy’s dad, and in a false victory, Cicero deducts $2,000 from the amount the restaurant owes, chipping away at the debt. At the restaurant, Sydney begins to earn the respect of the rest of the staff. The stakes are raised, though, as Carmy knows that the new system needs to succeed if he is to keep the chefs aligned with his vision.

Bad Guys Close In: Just as things begin to get better, problems arise in Episode 5. The toilet backs up, overflowing into the restaurant. When Richie’s friend Neil (Matty Matheson) comes to repair it, he tells Carmy that Richie had been selling cocaine in the restaurant’s alley. As external bad guys surface, Richie admits that it was the only way the restaurant could stay afloat during the COVID-19 pandemic, but he agrees to stop. Soon after, Marcus blows a fuse as his mixer malfunctions. Neil reveals that it will cost thousands of dollars to get a new condenser, and Carmy faces his internal bad guys as he asks Richie to sell drugs once more to get the needed funds.

Conflict begins to brew between Sydney and Carmy in Episode 6. Sydney tries to create a new risotto dish, but Carmy insists that it’s not ready to add to the menu. Defeated, Sydney gives the risotto to a customer. When the restaurant’s windows are shot out, Sydney is able to calm the feuding gang members down by reasoning with them (and offering them free food); Richie sees this and his own internal bad guys creep in, causing him to feel useless amid the restaurant’s changes.

Meanwhile, Carmy and his sister Sugar (Abby Elliott) search through their brother’s things in an attempt to find missing paperwork to file taxes. Together, they both deal with the loss of Michael. When a new review of the restaurant mentions the risotto, Sydney must admit to Carmy that she had served it despite his instructions.

All Is Lost: In Episode 7, minutes before the lunch rush, the crew learns that Sydney had forgotten to shut off the preorder option for their online to-go service. Tickets begin pouring in, chaos engulfing the team. Sydney quits when Carmy explodes at her, leaving him to deal with the fallout as he becomes overwhelmed by the stress of it all.

Dark Night of the Soul: At an Al-Anon meeting, Carmy shares his story, detailing why he chose to become a chef. Later, the restaurant hosts a bachelor party, and when guests become disorderly, Richie intervenes, nearly killing a man. Having reached his own personal low, Richie faces how he has treated Carmy. As A and B Stories cross, Richie gives Carmy a letter from Michael that he found earlier in the season, one that includes Michael’s last words to his brother. The two sentences on the envelope bring Carmy to tears: “I love you, dude. Let it rip.” Here, the thematic premise is brought forward, encouraging Carmy to embrace his talents and passion.

Break into Three: Inside the letter, Carmy finds the recipe for the family’s spaghetti, a recipe he has never been able to replicate. In the note, Michael tells him to use the smaller cans of tomato paste because they “taste better.”

Finale: Now, embracing the restaurant’s past and his own new direction, Carmy makes his sacrifice, preparing to cook the spaghetti. He enters his synthesis world and gathers the team of himself alone. He finds the cans and executes the plan, opening one, but in a high tower surprise, he discovers hundreds of dollars hidden inside the can. He calls the rest of the crew in to open the other cans, discovering that they are also filled with cash. Digging deep down, he texts Sydney to apologize to her and suggest improvements to her risotto, and as the team executes the new plan, they work together, a cohesive whole, and discover the money Michael had borrowed from Cicero, stashed away and hidden in the cans. As Sydney returns to the restaurant, she’s greeted as family.

Final Image: Carmy hangs a sign on the restaurant’s window thanking customers for their years of patronage to The Beef, which is closing its doors. In its place will be a new restaurant, The Bear. It’s an echo of the Opening Image: Carmy has let loose with his passion, letting the Bear out of its cage.

See the Beat Sheet for The Bear Pilot Episode>>

Learn how to beat out YOUR TV pilot and series>>

Best of Blake's Blogs: Inspiration for the New Year

Save the Cat!® TV Pilot Webinar -
Now on Sale