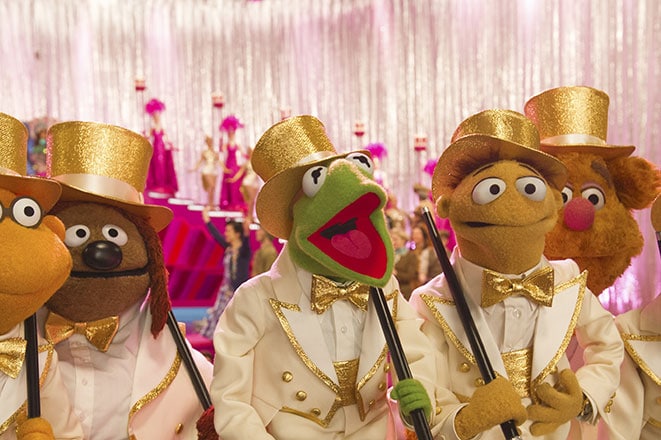 Thanks to Master Cat! Cory Milles for this most-wanted breakdown.

Genre: Frog with a Problem combined with Buddy Love

Opening Image: The film opens up at the end of the last film… literally. As the image pans down from the words “The End,” it is obvious that the characters are on the set of the previous movie. Revealing itself as a film-within-a-film, the self-referential humor that is always so prevalent in Muppet films is alive and well.

Set-Up: Immediately, the cast of Muppets begins to sing about how the studios have ordered a sequel. The song pokes fun at Hollywood and sequels in general, noting how sequels aren’t usually as good as the first, but assured in the fact that they can’t do any worse than The Godfather: Part Three. The gang is together, fresh off the success of their big comeback from the last film, ready to see what happens next. They have a meeting with Dominic Badguy (Ricky Gervais).

Meanwhile, Constantine, the world’s most evil frog, breaks out of a Siberian gulag. Aside from a mole on his face, he looks identical to Kermit.

Theme Stated: During the meeting with the Muppets, Dominic tells them that they are at a high point in their lives and careers right now, but they are destined to fall from it eventually. This is the theme that will be ultimately be debated: the Muppets are a family, but what does it mean to function as a family and to care about each other? Does it mean doing whatever you want, or does it mean working together and doing what is best for the whole?

Set-Up (Continued): Kermit wants to start slow and build their show back up, but Dominic puts pressure on the group to go on a worldwide tour. Eventually, Kermit gives in to the pressure of the others even though he doesn’t think it is best for them. Meanwhile, Dominic receives a call from Constantine, his partner in crime, setting up plans to meet in Berlin.

After arriving in Berlin, Kermit’s authority is further questioned when Dominic takes over planning the venues they will perform at. The first one will be in the Berlin theater adjacent to the National Treasure Archives. Full of excitement, all of the Muppets want to try new acts, but Kermit says no, they can’t just do what they want to. Frustration sets in until Dominic states that the venue has already sold out. Kermit begins feeling pushed out of his leadership role, and his stress is only compounded when Miss Piggy pressures him to get married.

Confusion setting in, Kermit seeks solace, and Dominic suggests a calming walk through the fog in an uncharted canal. Kermit takes the bait, and his journey begins.

Catalyst: While walking through the fog in “Plotpointsburg,” Kermit meets a veiled Constantine, who slaps a fake mole onto Kermit’s face. Bystanders now recognize him as Constantine from the plethora of “Wanted” posters in the alley, and Kermit is arrested and taken to the Siberian gulag.

Debate:  When Constantine arrives at the Berlin theater before the performance, it becomes evident that it will be a challenge to fill Kermit’s webbed feet. Will the rest of the Muppets notice? What will happen to Kermit in the gulag? Will Constantine and Dominic (Number One and Number Two, respectively) be able to fool them long enough to carry out their plans for a heist? Animal seems to be the only one to notice that Kermit is not the one who returned, while Walter has some reservations.

Break into Two: The show in Berlin begins, and it is obvious that Constantine has some trouble passing for Kermit, but the performance is ultimately a success. Meanwhile, Kermit is introduced to his new “family” in the gulag, and they immediately deduce that he is not their former prison-mate. He has entered the upside-down world of life as he knew it.

Fun & Games: Dominic and Constantine use the show as a distraction to rob the Berlin museum, stealing artwork depicting Colonel Blood. Discovering a set of clues on the back of the painting, they realize the next piece of the puzzle, a key, is in Madrid.

B Story: The B Story is seen on several levels. First, Constantine must convince the others, particularly Miss Piggy, that he is “their” Kermit. He sings a love song to her, promising to give her everything she wants, extending this promise to the rest of the gang. He tells them they can do whatever they want from now on, the opposite of what the real Kermit would do. By doing this, he hopes to cement their false relationship as a family. It is the balance between the true and false relationship that will decide their fate.

Fun & Games (Continued): CIA Agent Sam the Eagle works with Jean Pierre Napoleon (Ty Burrell) to figure out who committed the crime, finding only a coin linking international criminal The Lemur to the scene. The Muppets depart for the next step on their worldwide tour, Madrid. During this performance, all of the cast members do whatever show numbers they want, including an indoor running-of-the-bulls. Constantine struggles to make everyone believe he is Kermit, but the assurance of freedom has won the rest of the gang over. Even though the show is a disaster by Kermit’s standards, it allows Constantine and Dominic to locate the key, furthering their plan. That leads to their next clue: a locket which can be found in Dublin.

Sam and Jean piece together that the Muppets were performing next to the scenes of the crimes and they are brought in for questioning. Ultimately,the conclusion is reached: no one in the Muppets is smart enough to pull off such a heist.

In the gulag, Kermit is coping with being alone, wondering why his friends haven’t come for him. He makes several attempts to escape, all of which are foiled by Nadya (Tina Fey), one of the prison guards.

Midpoint:  While trying to escape, Kermit is confronted by Nadya. He tells her that he needs to get back to his family, but Nadya says that they have obviously forgotten about him. She tells him that in the gulag, there is no concept of family. It is everyone for himself, and Kermit must get used to that. Nadya tells him that there is a need for him: the annual prison revue. He does not actually have a choice, yet when he begins directing the inmates, he finds that he can control them better than he could with his real family.

Bad Guys Close In: While Kermit is in the gulag, Walter becomes increasingly suspicious of Constantine and Dominic. When they arrive in Dublin, he follows Dominic into town, discovering that Dominic has been paying off the press to give good reviews of the shows and has been handing out tickets to pack the venues. Fozzie discovers that Constantine has been impersonating Kermit, and together with Walter, they sneak into Constantine’s room. Trapped and confronted by Constantine, they are saved by Animal, who was the only one to voice any suspicions from the start. The three of them escape onto another train, realizing that they need to find the only one who can set things right: the real Kermit.

Constantine and Dominic understand that they must achieve their goal as quickly as possible, and after obtaining the locket during the Dublin show, Constantine proposes to Miss Piggy on stage. He announces that they will get married in the “most romantic place” on Earth: in the Tower of London.

All Is Lost: When the other Muppets ask what will happen to the group after the wedding, Constantine tells them that they can go and do whatever they want without him; he is done with the Muppets. The whiff of death is in the air as the group, which has just found their unity, now threatens to break apart.

Dark Night of the Soul: The Muppets cope with the fact that they will soon part. Miss Piggy sings about it, wondering how something so right can feel so wrong, and the others join in, questioning. Kermit still longs for his old friends even though he has seemed to find a family of sorts in the gulag, the performance coming along nicely.

When Walter, Fozzie, and Animal interrupt the prison revue to rescue him, Kermit is happy, but also saddened to realize that no one really noticed he was replaced. He wants to give up, questioning whether or not his family actually needed him, but they reassure Kermit that they have always needed him. When Kermit learns that Miss Piggy will marry Constantine, he knows he must come to her aid.

Break into Three:  With the help of the inmates and his friends, Kermit stages a prison break-out.

Finale:  At the Tower of London, Kermit and his friends try to sneak in and stop the wedding. While in Constantine’s room, Kermit overhears the plan to “get rid” of Miss Piggy when the heist is over.

He and Fozzie are arrested by Sam the Eagle, but quickly find a way to escape. During the wedding, Dominic, A.K.A. “The Lemur,” steals the crown jewels while the wedding is underway. Kermit confronts Constantine and

gains Miss Piggy’s trust. However, in the high-tower surprise in the Tower of London, Constantine activates a bomb embedded in Miss Piggy’s ring. When that fails, he kidnaps her and attempts to get away on a helicopter. The Muppets, banding together as a family, save the day and rescue her.

When Constantine and Dominic are taken away, Nadya returns to apprehend Kermit. Realizing that he belongs with his family, she allows him to go free. But Kermit declares that one more stop remains on their worldwide tour: Siberia!

Final Image: The Muppets sing “Together Again (Again)” in a call back to their 1984 film The Muppets Take Manhattan. In a big musical performance staged in the prison, the final image leaves the audience with one message: the Muppets are a family, one that will stick together even as they perform in a frozen Siberian gulag. Until the next sequel, that is…

Be Good in the Room: Because a Good Script Is Only Half Your Job