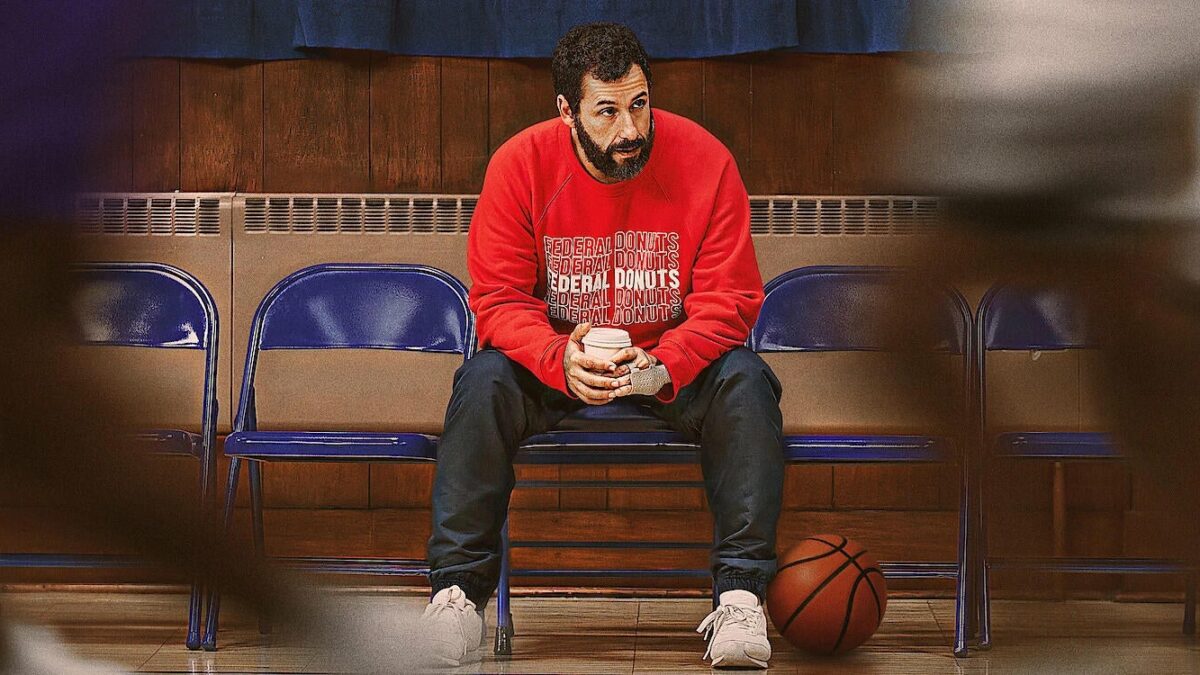 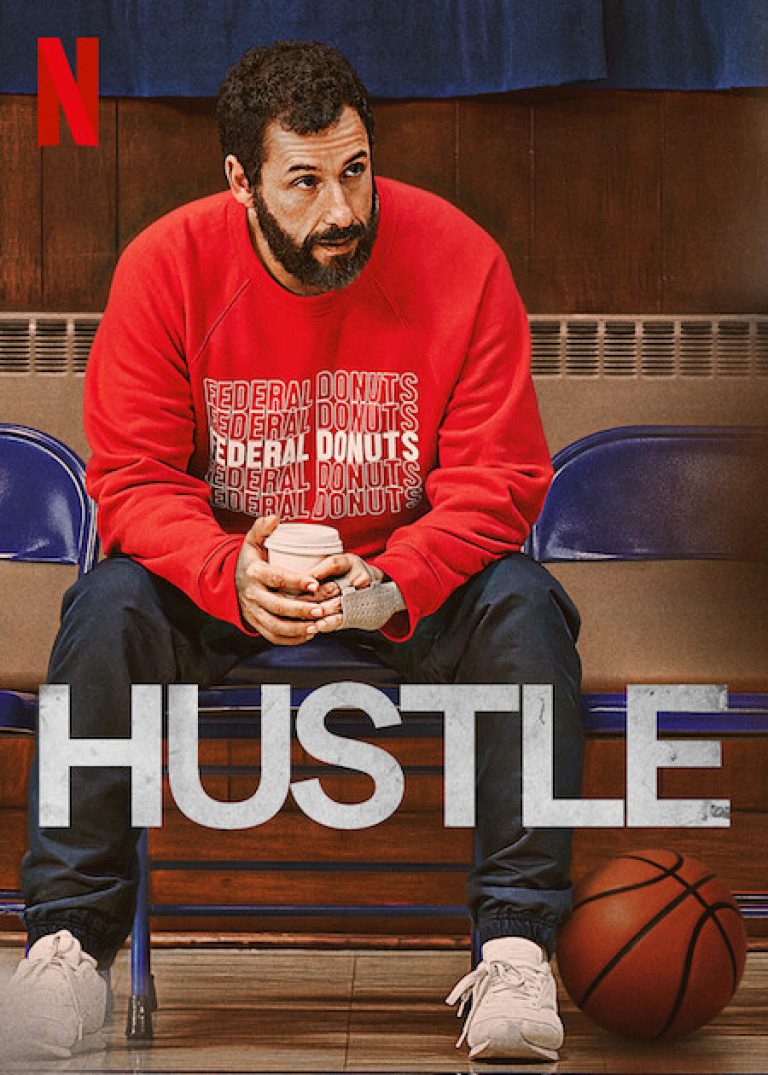 Written by: Taylor Materne and Will Fetters
Directed by: Jeremiah Zagar

Opening Image: In a foreign country, basketball scout Stanley Sugerman (Adam Sandler) walks through a darkened hallway leading to a gym, searching for possible recruits for the Philadelphia 76ers.

Set-Up: In his thesis world, Stanley travels the globe looking for talent. He’s alone, away from his wife and daughter, and constantly disappointed by players who don’t seem to fit what he’s looking for. The owner of the team, Rex Merrick (Robert Duvall), values Stanley’s input, but Rex’s son Vince (Ben Foster) is always unimpressed. Stanley finds a prospect in a German player, but facing Vince’s disdain in a meeting, he’s reluctant to recommend him to the 76ers’ management.

Theme Stated: Later that day, Rex pulls up in his vehicle and beckons Stanley. Rex tells him that he shouldn’t have backed down to Vince. Stanley realizes that he should have pushed back, promising it won’t happen again. Rex surprises Stanley with his new office; he’s making him an assistant coach, and repeats the thematic premise: “Never back down.” On his journey, Stanley will need to persevere despite the odds that assail him.

Set-Up (continued): At home, Stanley shares the news with his wife, Teresa (Queen Latifah), and daughter (Jordan Hull) Alex. While taking his daughter to a movie, they discuss her going to film school, and it’s clear that there are still things that need fixing in their lives. She’s upset that he’s been away for so long, but he sees hope of escaping his stasis = death situation now that he’s coaching. Just as things start looking up, he hears news on the radio that Rex has died.

Debate: At home, Stanley discusses the news with his wife. He’s not sure what to do, and she doesn’t want him to give up on his dream. “There was only one guy who knew what I was capable of, and he died,” Stanley tells her. Arriving in Spain, he meets with his friend Leon (Kenny Smith), who tries to persuade Stanley to join him as a players’ agent.

Break into Two: At night, as Stanley searches for a place to shoot some hoops, he comes across a huge crowd watching a game of street basketball. One player, Bo Cruz (Juancho Hernangomez), stands out, and Stanley chases the bus to follow him home.

B Story: At the player’s home, Stanley introduces himself and proves that he works for the 76ers. He meets Bo’s mom and daughter. It is through helping Bo that Stanley will achieve his own dreams of being in the NBA.

Fun and Games: In his upside-down antithesis world, Stanley tries to persuade Vince to bring Bo to the United States, but since Bo hasn’t played organized basketball in eight years, Vince isn’t interested. Ignoring Vince, Stanley lies to Bo about the team wanting to see him and brings him to America. When Bo is detained at the airport for an assault on his record, Stanley asks the team’s legal counsel to keep it quiet. Stanley puts Bo up in a hotel, and the promise of the premise is seen as Stanley works on his own to train and mentor Bo, wanting to give him the chance that he himself didn’t have.

At a showcase scrimmage, Bo plays against other high-profile players, including Kermit Wilts (Anthony Edwards), projected to be #2 in the draft. During the game, Kermit gets into Bo’s head, and it affects Bo’s performance. Afterward, Vince says the 76ers aren’t interested, and Stanley will have to pick up Bo’s tab and continue searching for talent. Frustrated, Stanley quits, asking Leon if he can find a spot for Bo in the Draft Combine.

Midpoint: Although it’s a false defeat, Bo asks if he is going back home since he didn’t play well. Stanley, however, counsels him, asking Bo if he loves the game and is ready to press on, doing what it takes to be in the NBA. Stanley reiterates the theme, telling him, “Let’s make that happen. Never back down.” Time clocks tick as the Draft Combine is six weeks away, and the stakes raise; Bo’s future depends on how well Stanley prepares him.

Bad Guys Close In: Stanley’s daughter films the highlights of Bo’s training sessions. As Bo struggles to improve, conflict increases when Stanley’s wife learns that he quit his job, and that he is paying for Bo’s hotel, even sending money to Bo’s mother back in Spain. More bad guys close in as Leon calls, saying that he can’t get Bo into the Combine; the list is locked. On a television sports show, Vince discusses Bo and how the 76ers did not want him to be brought to America, and that Stanley no longer works for the team.

Angry, Bo leaves, feeling betrayed and without hope. When Stanley tracks him down and the two drive home, both men share their inner bad guys. Bo opens up about his assault charge and how it has haunted him and labeled him, while Stanley tells how his hand was injured, ruining his own basketball career. When Stanley can’t get Bo into the Combine, his daughter comes up with an idea to use viral videos to help Bo’s popularity, letting people see him play. It works, and soon Bo is invited to be in the Combine.

All Is Lost: It’s a false victory for Stanley. Bo doesn’t seem excited to play, and Stanley struggles to find out why. He has a shot at the NBA now, everything they’ve worked for. Teresa notes that Bo’s never been away from his daughter, something Stanley can identify with all too well.

Dark Night of the Soul: The night before the Combine, Stanley surprises Bo with his mom and daughter at the hotel. Now that Bo is energized, Stanley gives him some advice about facing adversity, both physical and mental. Bo is ready to follow through, knowing he won’t back down.

Break into Three: Stanley and Bo arrive at the Combine, ready to play.

Finale: Now in his synthesis world, Stanley pushes Bo achieve his dream. Bo plays well, but in a high tower surprise, he lets Kermit Wilts get into his head when Kermit trash talks about his daughter. Bo reacts, pushing Kermit to the ground and slamming his hand onto the floor next to Kermit’s head. Later at a bar, Stanley confides in Leon, stating that Bo’s been labeled as a violent street kid now, and some people don’t get a redemption story but keep falling. Meanwhile, Bo’s mom consoles him, showing Bo that he’s finally been doing something for himself.

Just after Stanley says goodbye to Bo at the airport, Leon calls him, inviting them to a last-minute secret game with team owners and coaches in attendance. Though he’s already said farewell to Bo, Stanley digs, deep down and refuses to quit. Executing the new plan, he runs through the airport to catch Bo before he boards, and the two race to the game. Bo plays, outshining Kermit this time, and drawing notice from NBA observers at the game. Rex’s daughter Kat (Heidi Gardner) tells Stanley she’s stepping in to clean up the mess her brother Vince made, and offers him a job.

Final Image: Five months later, Stanley is an assistant coach of the 76ers. As the team hits the court for the opening game of the season against the Boston Celtics, he nods to Bo, playing for the Celts. No longer scouting for talent as in the Opening Image, Stanley has helped a street kid from Spain achieve his dream… and in doing so, Stanley has achieved his own.

Save the Cat! 5.0 Is Here: Introducing Our Focused Layout