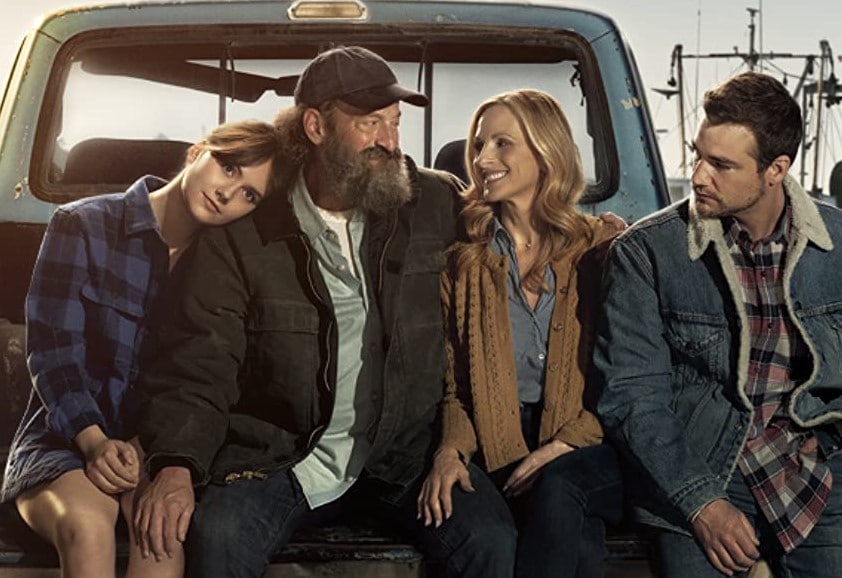 Written and Directed by: Sian Heder
Based on the motion picture La Famille Belier

Opening Image: On a boat in Gloucester, Massachusetts, teenager Ruby (Emilia Jones) sings as she helps her father and brother empty fishing nets.

Set-Up: In the fishing town, Ruby’s family struggles to make a living. There’s plenty of things that need fixing in her life. As a child of deaf adults, she is the only one in her family that can hear, and this creates a toll on her. In her thesis world, she is used to being the family’s interpreter.

At the doctor’s office, she has a humorous Save the Cat! moment when she translates for her parents. Still, she’s in a state of stasis = death, torn between two worlds, and knows she’s looked at differently by others. When she must choose an elective, she decides to join choir when a boy she likes, Miles (Ferdia Walsh-Peelo), signs up for the same class.

Theme Stated: When a girl at school teases Ruby, her friend Gertie (Amy Forsyth) says, “At least she’s not doing deaf voice anymore. That’s progress.” This statement hints at the thematic premise of the story. Ruby wants to find where she belongs, discovering herself despite how others see her as she lives in both worlds.

Catalyst: Ruby goes to choir class for the first time.

Debate: When she sees others audition, she begins to doubt herself and runs out. She’s intimidated, but finally talks to Mr. Villalobos (Eugenio Derbez), who encourages her and notes that she has something to say. Struggling to see herself in the worlds of the hearing and the deaf, Ruby must choose to take the next steps.

Break into Two: Ruby enters her upside-down world and sings in class, finally breaking through her nervousness when Mr. Villalobos forces her to do some breathing exercises.

B Story: Ruby’s connection to her family serves as the B Story. It’s here that she will discover how she fits in. The B Story also focuses on the family breaking through their own comfort zones as they become a bigger part of their community.

Fun and Games: In her antithesis world, Ruby begins to find her own voice in choir class. The promise of the premise is seen as we discover how she navigates life as a CODA while embracing her individuality and passion for singing. She learns how others see her and her family and helps her brother and parents navigate the world around them, but she wants her father (Troy Kotsur) to stand up for himself to the local fishing board. She begins to open up to Miles as the two practice a duet at her home. Their moment is interrupted when her parents are loudly engaging in relations in the next room, though, causing Ruby to be reminded of how different her life is. At school the next day, other students begin to make fun of the incident, and Ruby feels betrayed by Miles.

Midpoint: As the A and B Stories cross, Ruby has a slight false victory. At a meeting, her father stands up to the board and declares that he will start his own business, inviting other fishermen to do the same. Ruby also experiences success in singing when she begins private lessons with Mr. Villalobos, hoping to audition at Berklee College of Music. He teaches her how to use what she believes is the ugliest sound, a “deaf voice,” to control her stomach and sing. Now, the stakes are raised and time clocks are ticking: her parents’ business adds pressure for Ruby, yet she must prepare for the audition, her one hope for a different life.

Bad Guys Close In: Ruby faces conflict from all sides, both internal and external. She is late to Mr. Villalobos’s house for lessons. She promises it won’t happen again, but the next time, her parents need her to translate for a local news story, forcing her to choose between what she wants and her responsibilities. Angry, she doesn’t help them on the boat, and when an observer accompanies her father and brother, the business is at stake as the Coast Guard arrives. Meanwhile, Ruby confronts Miles, who insists he was not making fun of her family, but actually envies the love the family shares, and the two begin to bond.

When the family loses their license to fish, Ruby feels responsible; they need her, and she knows she will need to give up her dreams of music and college to help. Tension mounts with her brother (Daniel Durant), who feels that the world needs to adapt to them, too. In a heartfelt conversation with her mom (Marlee Matlin), Ruby learns that her mother was worried that they would never bond due to their differences.

All Is Lost: The night of the concert arrives, and Ruby performs her duet. However, her family can’t hear it or enjoy her passion. All they can hear is silence. It’s the whiff of death for her dreams, as she can never truly share her love of music with them on the same level.

Dark Night of the Soul: After the performance, Ruby sits outside with her dad, who asks her to sing for him as he feels her neck muscles. A and B Stories meet as he tries to understand her love of music and connect with her.

Break into Three: When Ruby wakes up the next morning, she’s surprised that her family isn’t taking her fishing. They have something else in mind. In Ruby’s synthesis world, she will be able to be a part of both worlds.

Finale: The family decides that Ruby must pursue her passion, so they prepare to storm the castle and get her to the audition at Berklee. The team gathers, and they execute the plan, driving to the college. When they arrive, they are faced with a high tower surprise: the family cannot go in with her. When Ruby auditions, she feels intimidated and begins to mess up her song. But soon, her family sneaks into the balcony to watch her, and she digs, deep down to embrace her family’s deafness and her love of singing.

Executing the new plan, she begins singing again, this time signing the words so her family can share in her love of music as well. Later, she’s accepted into the college, and her family begins to find their place in the larger world, too.

Final Image: After a long hug with her family, Ruby leaves for college, but not before turning back to sign, “I really love you.”

See other beat sheets and blogs by Cory Milles>>

Writing Comics Short and Long - As Long as They Are Weird!