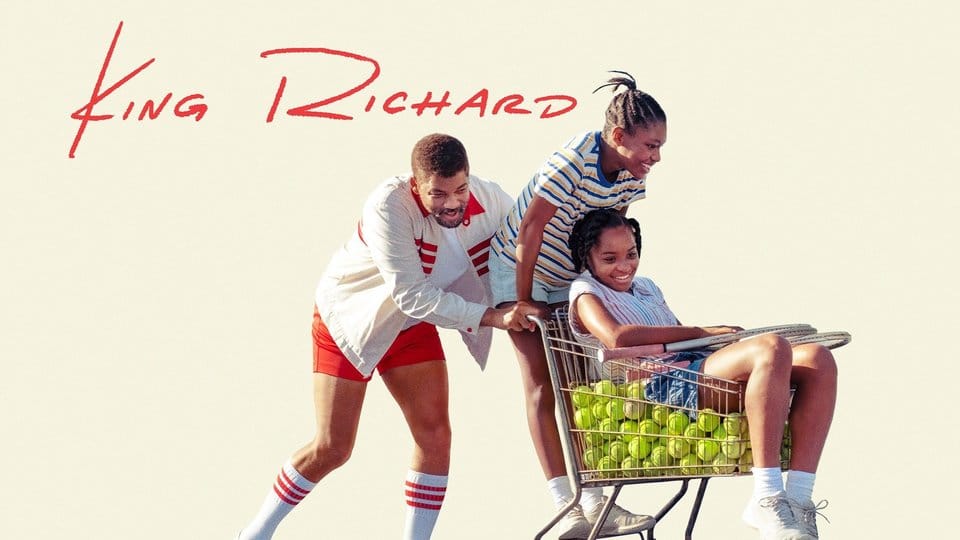 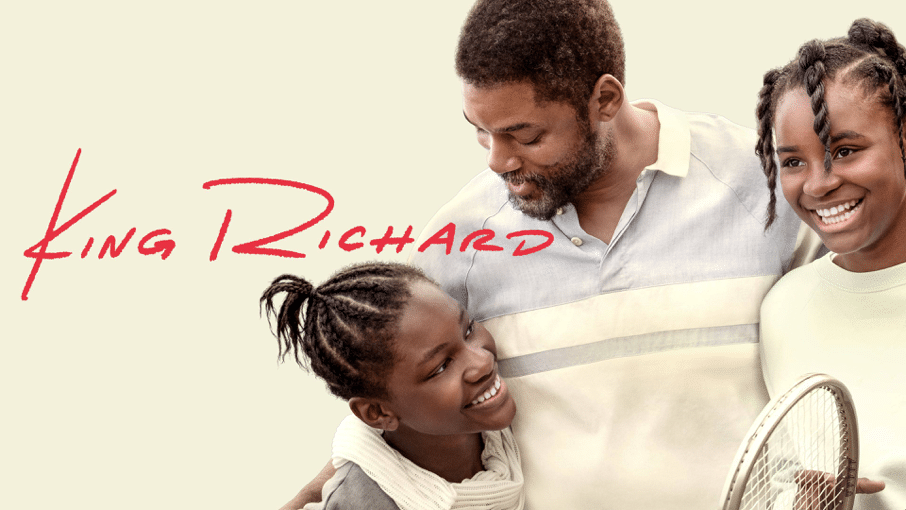 Opening Image: Richard Williams (Will Smith) gets used tennis balls at a country club pro shop; he’s the fool in this story, and he’s about to change the establishment forever.

Set-Up: Raising his family in Compton, California, Richard wants to guide his daughters to achieve greatness. Before they were born, he wrote a 78-page plan detailing how he would help them succeed. Loading his five daughters into the family van, he takes them to a neighborhood tennis court, training them with a shopping cart of used tennis balls. Among his things that need fixing in his thesis world: he wants to get them trained professionally, he’s overworked, and he strives to keep them off the violent streets.

Theme Stated: At the tennis court, a neighbor says, “King Richard, don’t get much rest ever, do you?” He replies, “Don’t nothing come to a sleeper but a dream.” This is the thematic premise: things might seem impossible, but for Richard, a dream can come true with a positive mindset, hard work, and determination. He will stop at nothing to make it happen for his girls.

Set-Up (Continued): While practicing, Richard and his daughters are heckled by teenagers who then beat him up. At home, he’s greeted by his supportive wife (Aunjanue Ellis), who also believes in their dream. They live in a small house, and Richard works nights to make ends meet. Even so, he uses every spare moment to read tennis magazines to prepare his girls.

When a tennis pro refuses to train his daughters Venus (Saniyya Sidney) and Serena (Demi Singleton), saying it’s unlikely that both of them will become as successful as Richard believes, he is in a state of stasis=death. Despondent, he goes back to the practice courts alone to think, and is almost shot by the same teens that beat him up earlier. Later, he follows them, planning to do whatever it takes to protect his girls.

Catalyst: Outside the convenience store where he’s followed the teens, Richard takes out his gun. Just then, a drive-by happens, killing one of them.

Debate: The shock is all too real. Richard doesn’t want his girls to grow up here where they, too, can die on the streets. After talking to his wife, he takes Venus and Serena to see Paul Cohen (Tony Goldwyn) to ask if the tennis pro will train the girls. Richard convinces Cohen to let the girls demonstrate their skills, and when they arrive home that night, they reveal that they have a coach. However, as Richard tells his wife, Cohen has agreed to train Venus for free, but not Serena.

Break into Two: Richard takes Venus to begin training with Cohen, while Serena trains with her mom.

B Story: The B Story focuses on Richard’s relationship with his daughters. It’s the difference between his role as a coach vs. his role as a father, the dream vs. the emotional well-being of his children. Throughout the journey, he will cement what he needs to be in their life to truly support them.

Fun and Games: The promise of the premise is seen in the upside-down antithesis world as Venus trains. Richard wants to throw in his advice, but he’s not the coach anymore. Venus begins competing in Juniors matches, drawing attention and admiration with her victories. Richard’s parenting is seen in contrast with that of other parents at the matches; he fuels his girls with confidence, driving them to succeed. Despite Venus’s victories, Richard is concerned with his girls showing humility. After training at night in the rain at their local court, he and his daughters arrive home to find the police investigating due to a complaint from a neighbor. Richard defends his parenting, admitting to the police that they’re hard on the girls to keep them off the streets.

Midpoint: In a false victory, Richard and Cohen meet with an agent, who offers to represent Venus. Richard is offended, though, when the agent seems to imply that Richard’s success is impressive despite the family’s race. The agent wants to use Venus to help the industry open up to a new demographic. Although this would help Venus get the attention she needs, A and B Stories cross as Richard refuses to let his daughter be used, instead rejecting the offer. The stakes have raised and time clocks begin ticking; Richard tells Cohen that the girls don’t need the pressure of competition at this age, and will only play matches when they turn pro.

Bad Guys Close In: Richard now faces the consequences of his decision. His wife is upset that he decided without her. Richard moves on to contact Rick Macci (Jon Bernthal) to train them, and after seeing Venus play in Compton, he agrees, and the family moves to his school in Florida. Once there, Richard tells Macci that Venus won’t play in Juniors, and conflict foments between the men. As Richard deals with the pressures of interviews and the media, he is quick to protect Venus from reporters’ insistent questions.

During training, Venus tells Macci that she wants to compete, and he tries to convince Richard to let her. Richard considers Macci’s request, but when he sees a news report about another young tennis star burning out and facing trouble with the law, he cancels practice and takes the family to Disney World instead. Macci confronts him, saying that Richard’s plan is in error and that Richard doesn’t know what he is doing.

All Is Lost: Shortly after, Richard gets into an argument with his wife. He defends his methods, but she tells him, “You’re just scared. Scared you will fail.” He’s scared that the world will look at him and see something he’s not. The whiff of death is present as he sees the potential for failure of his plan, his life, and his dreams for his girls.

Dark Night of the Soul: Richard finds Venus outside on court, angrily hitting tennis balls. Bringing her close, he tells her that when he was being beat up by white men as a young man, his father ran away rather than protect him, and that he has only tried to protect his daughters. A and B Stories meet as he tells her that this next step would be hard, but for Venus it’s even harder, because she’s representing every black girl on Earth. He wants to make sure when she looks up, she never sees her dad running away.

Break into Three: Venus commits to playing, believing she can do it. When a Nike representative meets the family with an offer, Richard and Venus reject it; Richard believes that the offer is too low and is willing to hold out for more.

Finale: In their synthesis world, Richard and Venus storm the castle of the tennis world as he gathers the team of his family. Venus executes the plan as she plays in the tournament and faces Vicario, the current champion. When the final match comes, Venus takes the lead from the champion while Richard paces and listens to the match from the bowels of the stadium. In a high tower surprise, Vicario takes a strategic bathroom break, stalling to throw Venus off her game. It works as Venus gets nervous during the unexpected break and begins to lose after Vicario comes back to resume play. Richard digs, deep down, and executes the new plan by going to sit in the stands with his family. If Venus looks up, he wants her to see him there as her father, not as her coach. Venus loses, but Richard is proud anyway.

Final Image: Richard, Venus, and the rest of the family are greeted by cheering crowds as they leave the stadium. Richard Williams has truly undergone a transmutation into King Richard; he’s helped his daughter’s dreams come true and opened up a world of possibilities for others who will be inspired by their story, a true Fool Triumphant.

See the beat sheet for CODA>>

The Importance of Putting Yourself into Your Scripts