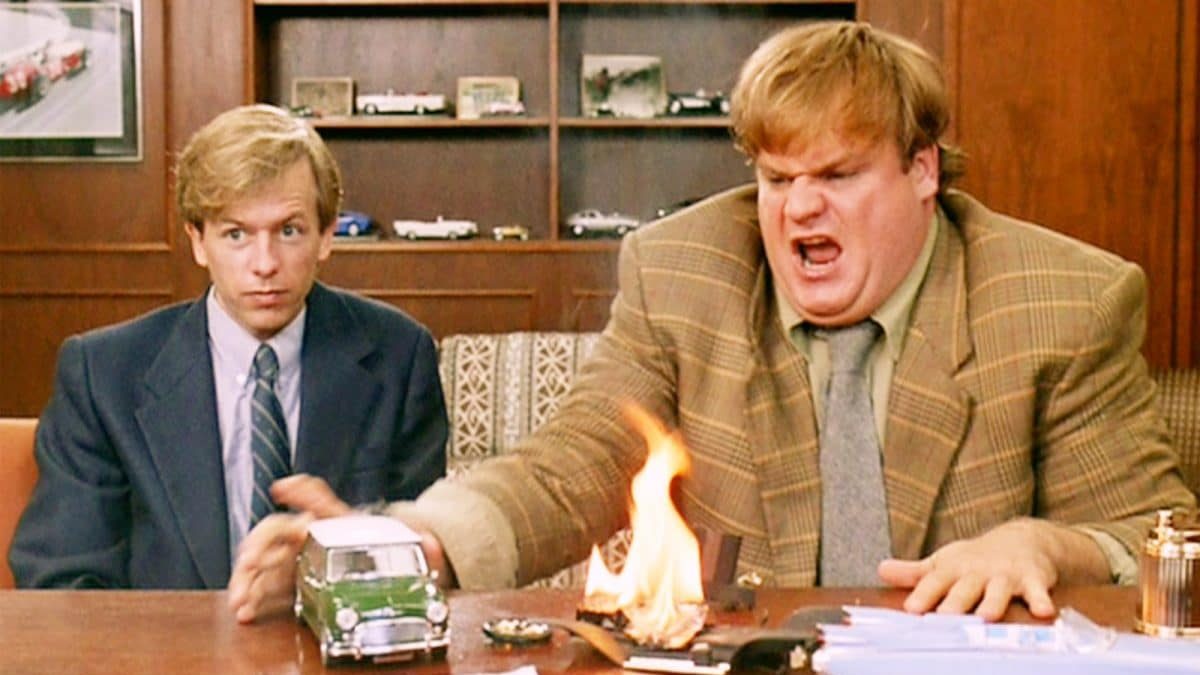 This Chris Farley hit premiered 20 years ago this week. As a salute, we show you why it has a story that resonates.

Opening Image: Young Tommy Callahan climbs down from his treehouse at the call of his mother and immediately runs into a glass door, demonstrating his clumsiness.

Set-Up: Flashing forward to the present, Tommy (Chris Farley) is in his last days of college, rushing to make it to his history final in time. He passes, earning a D+, which fills him with pride. Partying with his rugby teammates, he tells them he has no idea what he will do with his future. He travels home, being picked up by his dad’s right-hand man, Richard (David Spade). He demonstrates his lack of responsibility by making excuses for being late. As Richard drives him to Callahan Auto Parts, Tommy sees that many factories have gone under. Tommy and Richard arrive at Callahan Auto while Big Tom Callahan (Brian Dennehy) attempts to secure a loan from the bank to keep the factory afloat while he launches the new brake pad division.

Theme Stated: Big Tom refuses to seek outside investors, stating that Callahan Auto always has and always will be a family-owned business, and that one day Tommy will run it. This reveals the theme of the story: duty and responsibility to family. It is what Tommy will need to learn in his journey through the Transformation Machine.

Set-Up (continued): Tommy is well-known at his father’s factory, and in his thesis world, he lives a life of ease, being rewarded with a desk job without having to earn it. Big Tom introduces Tommy to his fiancé Beverly (Bo Derek), and Tommy is excited that he will be getting a new step-brother in her son Paul (Rob Lowe). At work, Tommy is ridiculed by some who see him for what he is. Luckily for him, he meets a high school friend, Michelle (Julie Warner), who is in charge of all the shipping orders. Tommy’s father gets married, and the wedding video shows that even during that time, Big Tom can do business and sweet talk others into sales.

Catalyst: At the wedding, Big Tom has a heart attack and collapses, dying.

Debate: Tommy is unsure what to do; he talks to Michelle on a boat and sorts out his options. At the board meeting, it is revealed that the bank does not want to risk giving the company a loan and that Zalinsky Auto has made an offer to buy the company. It is a stasis=death moment; if Tommy does not step out of his comfort zone, the town will go under and hundreds will lose their jobs. Taking his first steps toward transformation, Tommy offers his house and stock as collateral, handing over his inheritance. He also volunteers to sell the brake pads to make enough money even though he has no sales experience.

Break into Two: Tommy volunteers Richard to go on the road with him, helping him make the sales. This is his antithesis world, one in which he must take on a huge amount of responsibility.

B Story: Although off to a rocky start, opposites Richard and Tommy will become friends over this journey, learning from each other.

Fun And Games: Richard tries to teach Tommy how to sell, but in each instance, Tommy ultimately fails. His incompetence is shown in everyday events, from dressing professionally to putting gas in Richard’s car. Meanwhile, Beverly and Paul reveal that they are not mother-son, but husband-wife, and their plan is to get rich off of Callahan Auto; Big Tom’s death simply made it easier.

The Fun and Games show the ineptness of Tommy and Richard as they hit a deer and load it into the car. It wakes up later, destroying the car from the inside. Tommy tries but fails to sell like his dad and has trouble taking things seriously. Seeing a Zalinsky Auto commercial at a motel, he merely remarks that Zalinsky (Dan Aykroyd) seems nice, and Richard is angry at him for not caring about the stakes at hand. After Richard’s prize car is further destroyed due to Tommy’s ignorance, the two come to heads and fight with each other on the side of the road.

Midpoint: After the fight, the two attempt to make amends at a roadside diner. When the waitress tells Tommy that he cannot order the chicken wings he wants, he tries to talk her into making them anyway, ultimately succeeding. Richard tells Tommy that he has demonstrated the street smarts his father possessed, having the ability to read people. This is a victory, and in a sense is Tommy’s first “sale.” Of course, like all good Midpoints, it is a false victory.

Bad Guys Close In: The next day, Tommy makes his first sale of brake pads. He celebrates at a hotel, but reveals that he is worried about keeping the sales momentum going. Tommy and Richard see continued success, and as their new friendship is tested, they make more sales, ultimately putting them over the top of their quota. Back in Ohio, Paul tries to stop their progress by disabling the delivery trucks and tampering with the orders on the computer.

All Is Lost: When Tommy and Richard arrive back home in victory, they are greeted with bad news. All of the sales have errors, and many customers have cancelled their orders. The company will not be able to make the payment to the bank. The executives are going to have to sell to Zalinsky, who only wants the Callahan name, not the factory. By the next day, everyone will be out of a job. Tommy tries to console Michelle, who feels she is to blame, but he ultimately snaps at her, and she runs off in tears. Everything Tommy has worked for is lost.

Dark Night of the Soul: At the airport, Michelle sees Paul and Beverly kissing and calls her police officer brother to get background information on the two. Meanwhile, Tommy and Richard are driving through town, drowning their sorrows. When a police car chases them, Tommy uses a tactic his dad taught him, pretending there are bees in the car. As the two realize the plan has worked, Tommy stands under a Zalinsky billboard and understands that he must confront Zalinsky, doing what his father would do. He is finally seeing the full weight of his responsibility, and his journey through the Transformation Machine is nearly complete.

Break into Three: A and B Stories meet as Tommy and Richard go to the airport to book a flight to Chicago. While Richard tries to get tickets, Tommy calls Michelle to apologize. Unable to find a flight, the two sneak onto an airplane as flight attendants. This is Tommy’s synthesis world, one in which he has learned to take responsibility and step up for the family business.

Finale: In Chicago, Tommy and Richard storm the castle and find Zalinsky as he enters the office tower. The two confront him, and Tommy introduces himself, asking Zalinsky to reconsider buying Callahan Auto. As they head toward the meeting where the sale will take place, Zalinsky reveals his true colors. In a high tower surprise, he leaves Tommy and Richard at the door, giving them just a long enough look to see everyone present as Callahan Auto is about to be sold.

Tommy sulks outside the building, feeling like a failure because he let his dad down. Richard consoles him, telling him that he did a good job and made a friend in the process. When Michelle shows up and reveals information about how Paul and Beverly swindled Big Tom, Tommy is infuriated. Digging deep down, he knows that he needs to discover his own way of getting things done; this includes combining his father’s sales tactics with his own idiocy. Even though Tommy is not allowed in the meeting, he pretends to have a bomb strapped to his chest and uses live television to convince Zalinsky to buy half a million brake pads. After signing the contract, Michelle reveals that Beverly was not legally married to Big Tom, and all of her shares revert to Tommy, who will not sell to Zalinsky. Callahan Auto and the town have been saved.

Final Image: Finding a moment alone, Tommy talks to his dad while sitting on the sailboat on the windless lake. He asks his dad for a miracle, the wind starts up, and the mast slams into Tommy’s head as he sails away.

Save the Cat!® Podcast: Birdman and Its Genre