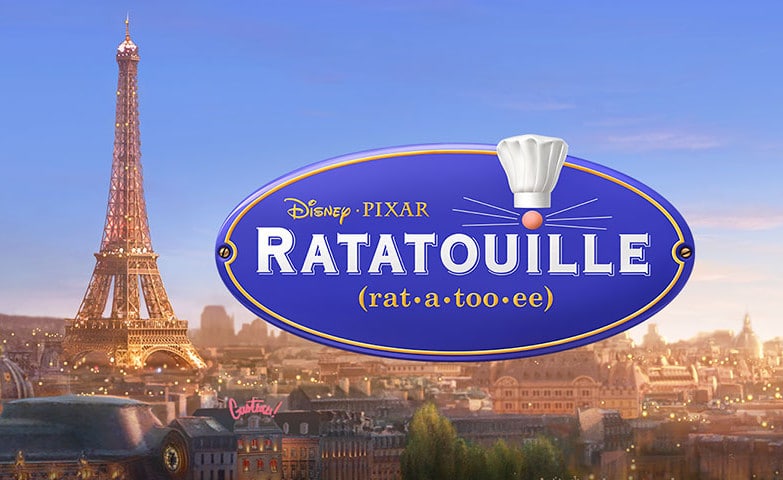 Opening Image: A black-and-white documentary clip sets up Chef Gusteau (voiced by Brad Garrett), and plants the seed of a message with Gusteau’s philosophy that “Anyone can cook.” Later, that sentiment and phrase will be turned slightly to reveal the lesson at the heart of the tale: greatness can come from anywhere if you dare to follow your gut. The scene ends with a challenge to that notion by Paris’s top food critic, Anton Ego (voiced by Peter O’Toole).

Set-Up: Remy (voiced by Patton Oswalt) is a rat. He is part of a colony living in the rafters of a farmhouse in the French countryside. Like all superheroes, though, Remy has a special skill that sets him apart from the others: he has a highly developed sense of smell. This ability brings with it an appreciation for the taste of good food, rather than the garbage that the rats commonly eat. However, in the rat community that kind of snobbery isn’t a good thing. Remy’s dad, Django (voiced by Brian Dennehy) puts Remy’s nose to work sniffing out garbage that’s too spoiled for his rat brethren to consume.

Theme Stated: Though his father forbids it, Remy secretly sneaks into the farmhouse to eat the better quality food, and catches sight of his culinary idol, Chef Gusteau, on the TV. Gusteau imparts the wisdom, “There is excellence all around you. You need only be aware to stop and savor it.” And though this speaks to Remy’s love of food, it also reiterates the theme that is explored throughout the movie.

Catalyst: In the farmhouse kitchen once again, Remy learns that Chef Gusteau—following a negative review from critic Anton Ego—has died. Still reeling from that blow, Remy and his brother Emile (voiced by Peter Sohn) are discovered by the homeowner. She goes after them with a shotgun and in the chaos, the entire rat colony is exposed. The rats flee together, but Remy becomes separated from the group.

Debate: Alone in the sewer, Remy sees the image of Chef Gusteau come to life from a cookbook Remy stole from the farmhouse during the escape. Gusteau encourages Remy to reinvent himself from rat to chef. Remy makes his way to Gusteau’s restaurant, where he witnesses the newest hire, garbage boy Linguini (voiced by Lou Romano) ruining the soup. When Remy sees an opportunity to fix the soup, his chef’s soul won’t allow him to resist doing so. Linguini spots Remy doctoring the soup but the food is whisked out to the patrons before Linguini can stop it, and all are surprised when it’s met with raves. Head Chef Skinner (voiced by Ian Holm), the Nemesis to our Superhero, and the other kitchen staff are convinced that Linguini is the embodiment of Gusteau’s belief that anyone can cook.

Break into Two: Remy tries to make his escape from the kitchen but is spotted by the kitchen staff. Linguini captures Remy in a jar and Skinner tells him to kill the rat outside. But Linguini realizes that the soup was great because of what this rat did to it, and also discovers that Remy understands him when he speaks. Linguini makes the decision to pair up with Remy so that he won’t lose yet another job.

B Story: At first Remy wants only to get away from Linguini alive. He’s been warned his entire life that humans are dangerous, after all. But seeing how desperately Linguini needs his help, Remy turns back. And that’s the real love story here—the friendship that grows between this rat and this human.

Fun & Games: Remy and Linguini work out a system whereby Remy can control Linguini’s movements while hidden under Linguini’s chef’s hat. They manage to pass their first hurdle when they convincingly re-create the previous night’s soup, earning Linguini the opportunity to be a cook in Chef Skinner’s kitchen. Fellow cook Colette (voiced by Jeneane Garofalo) is tasked with showing Linguini the ropes, and in the process their friendship grows and she welcomes him into the family of cooks.

Meanwhile, Skinner learns that Linguini may actually be Gusteau’s son and heir, threatening Skinner’s ownership stake in the business. He plots to sabotage Linguini’s efforts until a time limit set forth by Gusteau’s will has expired, giving Skinner sole control of the business.

Midpoint: Remy’s talent shines through, and Skinner’s attempts at sabotage are foiled. The restaurant is on the upswing again, thanks to Remy’s culinary genius. Just then, Emile shows up—Remy’s old life is calling him back.

Bad Guys Close In: Remy visits the colony but must break the news to his father that he’s not returning for good. Django shows him a gruesome sight—a store window full of rat traps; this is what humans think of rats—but Remy refuses to believe that the way things are is the way things always have to be, and he returns to the restaurant. Meanwhile, Remy’s directives cause a rift between Linguini and Colette and, in an effort to save the situation, Linguini professes his love to her. Their bond grows stronger, and Linguini begins to favor Colette over Remy.

The truth that Linguini is Gusteau’s son comes to light. Suddenly Skinner is out and Linguini takes over the business, becoming the new darling of the Paris food scene. He’s in the public eye in a big way, and Remy’s not getting any of the credit. Critic Anton Ego offers a challenge: he’ll return to the restaurant for another meal, giving them the opportunity to make a comeback from his previous review.

All Is Lost: Feeling betrayed by Linguini, Remy invites all of the rats to the restaurant to feast.

Dark Night of the Soul: In the midst of their pillaging, Linguini shows up. The rats hide from sight except for Remy. Linguini apologizes and tries to make amends for his behavior but before he and Remy make up, the rats are exposed and now it’s Linguini’s turn to feel betrayed—Remy is stealing from him. He kicks the rats out. Remy laments, “Who am I kidding? We are what we are.”

Break into Three: Skinner has still been lurking around, and now discovers that Remy is the real cook. Skinner kidnaps Remy, intending to use him for his own gain and leaving Linguini without his Cyrano de Bergerac of food.

Finale: A and B Stories cross as, with the help of his rat family, Remy escapes Skinner’s trap and goes back to the restaurant for the meal that will make or break them. But when Linguini reveals to the kitchen staff that Remy is the true chef, they all quit—even Colette. Django brings the other rats in to help, and Remy commands them like a real head chef. Colette returns, having realized that she had turned away from Gusteau’s motto, “Anybody can cook!” And all together, they create a meal that Ego can’t deny—including a ratatouille that evokes fond memories of his own childhood.

Final Image: Still, when Ego writes his review—though it is glowing—the world isn’t quite ready to accept rats in the kitchen. Gusteau’s is shut down, but Remy, Linguini, Colette, and Ego open a new restaurant together, La Ratatouille.