Rise of the Planet of the Apes Beat Sheet

Thanks to Master Cat! Ben Frahm for breaking down the hit film:

1. Opening Image (1):
— Eyes. Not sure if they’re human or ape.
— Pulling back we’re in a serene forest. Watching apes as they play. Peacefully.
— And then danger. Fear. They’re being chased. We assume by poachers. Traps are set. And some of the apes are captured.

2. Theme Stated (5):
When Caroline learns that Caesar has been living with Will, she tells him that some things belong in nature and shouldn’t be manipulated.

3. Set-Up (1-10):
— In a genetic lab.
— We meet BRIGHT EYES, an ape that has been undergoing testing. She’s been receiving ALZ 112, a drug that is supposed to increase brain activity. And it works. Her testing shows improvement.
— Meet the scientist behind it all. WILL RODMAN (James Franco). He’s excited by these test results. He can’t wait to tell the Board of Directors.

CUT TO:
— Board meeting: Will is telling investors that the drug ALZ 112 is working. The apes are showing increased intellectual capacity. This could be huge. This could lead to medical breakthroughs, like a cure for Alzheimer’s. The board director, JACOBS, a power-driven, money-hungry guy, is delighted.
— Meanwhile: there’s trouble in the lab. Bright Eyes is becoming aggressive with the scientists. She breaks free. Destroys some of the lab. And is ultimately shot by a Guard, as she’s considered dangerous.
— As a result, the ALZ 112 experiment is cancelled. It is thought that the drug caused this aggressive behavior. All of the apes are put to sleep. Except for a baby chimp. His name is CAESAR. We learn that Bright Eyes was pregnant and this is why she acted erratically. Before she died, the scientists were able to rescue her baby, Caesar. Caesar is the only ape that survives. And he doesn’t have a home. Who will take Caesar so he isn’t killed? The scientist looks to Will.

4. Catalyst (12):
— Caesar goes to live with Will.
— We meet Will’s father, Charles Rodman (John Lithgow). Charles is not well, he has Alzheimer’s, and we now know why Will is so driven to cure this debilitating illness.
— We learn that Caesar has some of the ALZ 112 inside of him, passed on from his mother. (This is dramatized by his “Bright” green eyes…)

5. Debate (12-25):
— Time passes. We see how advanced and bright Caesar is because of the ALZ 112.
— Will knows the drug works.
— So Will gives the drug to his father in hopes that it will cure his Alzheimer’s.
— The drug works. Will’s father’s health improves. It appears the Alzheimer’s has been reversed.
— Will takes Caesar to see a Veterinarian by the name of Caroline Aranha (Freida Pinto), who is astounded by his intellectual capabilities.
— Caroline and Will and Caesar spend time together.
— Will begins a romantic relationship with Caroline.
— And this brings us to the debate: will this drug continue to work? Is this drug healthy for Caesar? Can this drug really save Will’s father? At this point, everything looks encouraging.
— However, one day at the dinner table, Will’s father holds a fork incorrectly. Caesar corrects him. And we start to see that Will’s father’s Alzheimer’s is returning. The drug is flawed. 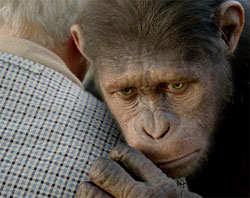 6. Break into Two (25):
— Will’s father tries to drive a car. He slams into the neighbor’s car. The neighbor becomes angry. Caesar sees this and misinterprets the behavior as dangerous. Caesar overreacts and bites the neighbor’s finger off. We’ve never seen this kind of behavior from Caesar before and start to wonder if it’s a side effect of the ALZ 112.
— It’s no longer safe to have Caesar living at home.
— Mandated by court, Caesar has to go live in a contained sanctuary with other apes.
— At first glance, this place doesn’t seem that great.

7. B Story (30):
— Will knows he doesn’t have long to save his father.
— So Will returns to the lab and convinces the director, Jacobs, that the drug worked on his father; however, it still has problems and needs some work. Jacobs agrees to reopen testing on the drug ALZ 112.

8. Fun and Games (30-55):
— Caesar in his new home, the “ape sanctuary.”
— Caesar misses Will and Caroline.
— Will and Caroline come to visit Caesar.
— All the while, new apes are being tested at the lab. It appears the ALZ 112 is working. The IQ scores from the apes are astounding.
— Will is convinced he can save his father.
— However, things are getting worse at Caesar’s home. The other apes are aggressive towards him.
— The guards in the facility are mean towards Caesar because he’s not like the other apes.
— And meanwhile, back at the lab, even though the drug is testing positively… Will’s father’s health continues to deteriorate. It appears the Alzheimer’s has become resistant towards the ALZ 112.
— Things start turning for the worse…
— Will’s father’s health is rapidly deteriorating.

— So is the treatment of Caesar in his new home. Something has to change…

— Will’s father passes away.
— The drug was not successful and Will blames himself.
— At the ape “sanctuary,” Caesar steals a knife from one of the guards. That night, Caesar escapes out of his cell.
— Caesar establishes his dominance over the other apes when he beats up the “Ape Bully.”
— Now Caesar is in charge and all of the other apes know it.
— Later, Caesar breaks out of the sanctuary and secretly steals some of the ALZ 112 from Will’s house.
— Caesar gives the ALZ 112 to the other apes.
— Caesar starts to plan a revolt.

10. Bad Guys Close In (55-75):
— Will goes to the lab to find that Jacobs has authorized more testing of the drug, even without waiting for the results from the apes. This could be dangerous. And Will knows it.
— However, when Will asks Jacobs to stop he says he will not.
— As a result, Will quits the lab. Things are getting out of hand and he no longer wants any part of it.
— Will also learns that a fellow scientist has died, because he was exposed to the ALZ 112. Will knows this needs to stop.
— Will goes to the ape sanctuary and tries to bribe the guard into letting him take back Caesar.
— However, when Will goes to Caesar’s cell and tries to convince him to come “home”… Caesar has an unexpected response…

11. All Is Lost (75):
— …Caesar doesn’t want to go with Will, “his father.” Caesar feels abandoned. And knows that Will is no longer his “home.” Caesar refuses to leave.
— The emotional core between Caesar and Will is lost. Will has raised Caesar. He is like a father to him. And this has become the strongest relationship in the movie… and, at this point… is the all is “lost” moment: the separation between our two characters that is devastating for the audience to see. 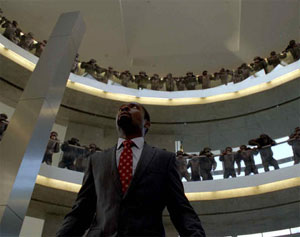 12. Dark Night of the Soul (75-85):
— That night, Caesar coordinates the “revolt” with the other apes.
— The apes break out of the sanctuary.
— They wreak havoc on the town.
— They destroy the genetic lab and steal all of the ALZ 112.
— Trying to find their way back to the forest… the apes cross the…

13. Break into Three (85):
— …Golden Gate Bridge.  Literally, this is the physical and metaphorical barrier into the third act.

14. Finale (85-110):
— And now “Storming The Castle,” these apes start fighting their way to freedom… back to the forest…
— However, there’s a “High Tower Surprise”… the police stack cars, helicopters, and tanks to stop the apes.
— That is, until, Will shows up and helps Caesar and his fellow apes escape to freedom…
— This is Will’s final “test” to see if he’s learned anything from his journey. And he has. Will helps Caesar and the apes return to their natural habitat. He is no longer trying to manipulate and change “nature.” And we know if he had this decision earlier in the movie, he would have reacted differently. But now he’s changed… and his decision to let Caesar return to his natural habitat is proof of Will’s change…

15. Final Image (110):
— In the forest, Caesar and Will find closure in their relationship. Caesar tells Will that, “this is home… the forest!”
— And as the apes are finally liberated… and swing from the trees… we see that this is the exact opposite image of our opening credits… where the apes were being poached and captured.
— Will watches as Caesar disappears into the forest… finally free.

Adapting to the Beat