The Kids Are All Right Beat Sheet

Our guest blogger, Erik Bork, is best known for his work as a writer-producer on the HBO miniseries Band of Brothers and From the Earth to the Moon, for which he won two Emmy and two Golden Globe Awards. He has also written original pilots and screenplays on assignment for many of the major networks and studios, and producers like Imagine Entertainment, Original Film, Playtone (Tom Hanks), and Steven Spielberg. You can find out more (and contact him) through his website, www.FlyingWrestler.com.

Genre: “Institutionalized”/”Issue Institution”: An ensemble movie in which several different characters each have their own mini-stories, interweaving around a central situation or “issue.” In this case, the “issue” is the effect on a family of two lesbian moms and two teenagers when the kids’ biological father comes into their lives (a sperm donor none of them had ever met). His entry into this family unit has a unique effect on each of the five people involved, and we spend time in each of their emotional perspectives as the story builds to a climax and resolves. The central question is this: How will each of them relate to and be part of this new “institution,” and what will this family unit look like when all is said and done?

(Amazingly, for a seemingly “small, unconventional, non-Hollywood” type of film, all the Save the Cat! beats line up almost exactly to the minute!)

1. Opening Image (minute 1): A teenage boy rides a bike through his town (with his troublemaker male friend next to him on a skateboard). Then, a shy teenage girl plays Scrabble with a nice boy who obviously has a crush on her — and a troublemaker female friend who urges them to “do it, already.” Then it’s back to the two boys, who do some drugs, leading to a violent encounter with the friend’s dad.

2. Theme Stated (5): The boy is asked by his mom about his friend: “Do you think he’s the kind of person who’s going to help you grow?” This will be the key question when the sperm donor enters their world: will the people in this family grow as a result of his presence? 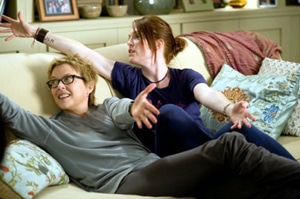 3. Set-Up (1-10): We learn these two kids belong to a lesbian couple: the more laid-back mom (Julianne Moore) has bought a truck to start a landscape company, which her doctor wife (Annette Bening) is skeptical about. The son later asks his sister about making a call to find their biological father. We then see the two moms have sex, with a gay male porn movie on the TV. Finally, we meet the sperm donor (Mark Ruffalo) at his farm/restaurant. He gets a call from a cryobank, and agrees to meet the children who were created using his sperm. He then has sex with one of his employees, and talks to her about the prospect of meeting his “kids.” By the end of the Set-up (as in most good Set-ups), it’s clear that our multiple main characters are all living compromised lives in some way, with unfulfilled desires and conflicts — but are also likable and sympathetic enough for us to want to follow them.

4. Catalyst (12): Mark calls the kids and they set up a first meeting — which is a secret from their moms. This meeting will end up rocking all five of their worlds, while containing the seeds of potential growth into better lives for all involved (as Catalysts should).

5. Debate (12-25): At an awkward first meeting, the kids and Mark try to assess who each other is. Afterward, the brother and sister discuss it, and disagree about what they thought of him, and whether they’d want to see him again. Mark talks to his lover about it — reeling from this first meeting, and wondering where it could lead. Meanwhile, the moms discuss confronting their son about possibly being gay. After Julianne catches him watching their gay porn movie with his friend, the moms sit him down to talk. He’s not gay, but reveals that they met the sperm donor. (Like most Debate sections, it focuses on questioning and experimentation as people react to the Catalyst.)

6. Break into Two (25): Now that the moms know the kids met Mark, and their daughter wants to see him again, the new reality sets in: he’s someone this family is going to be dealing with, but who knows in what capacity? The “Institution” of this family will never be the same again — their lives are about to be turned upside down.

7. B Story: Rather than a traditional B Story to augment a single main-character A Story, this movie essentially has five different “main characters” (whose emotional points-of-view we take on at various points), each experiencing their own perspective on the A Story.

8. Fun and Games (30-55): A hilarious first meeting of the moms with Mark (and the kids) explores the “promise of the premise” and contains some good “trailer moments.” Afterwards, Annette wants to limit his involvement in their lives, but Julianne wants to take him up on his offer of working on his landscaping as a first client. They begin to work together, and there’s a borderline flirtatious vibe. Meanwhile, their daughter’s female friend thinks Mark is hot. Mark hangs out with the son and his friend, who fails at a ridiculous skateboard stunt. Mark gives his negative opinion of the friend. Then, while working on plans in his kitchen, Mark and Julianne have an illicit kiss. She apologizes, and nervously tries to make light of it. Later, Mark gives his “daughter” some good fatherly advice, then takes her on a motorcycle ride — which freaks Annette out. His new “son” then clashes with his jerk friend and they fight. Mark’s influence is being felt on them all. 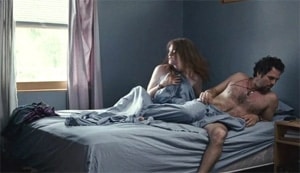 9. Midpoint (55): Mark and Julianne have sex — a major upping of the stakes! The initial, lighter ramifications of his presence have all been explored. Now things are getting serious.

10. Bad Guys Close In (55-76): Not knowing about the sex, Annette expresses her concerns about Mark, and Julianne tries to get her to drink less. They argue. Julianne’s employee seems to have an attitude about her and Mark, so she fires him. Annette suggests the family have dinner at Mark’s house, which makes Julianne nervous. Julianne tells Mark it’s over, but then they have sex again, and he tells her he thinks he’s falling for her. Mark breaks it off with his employee lover, upsetting her. Relationships are fraying everywhere. The “team” is fracturing. The big “problem” of Mark’s impact on their lives is closing in

11. All Is Lost (76): During dinner at Mark’s house, Annette finds evidence in his bathroom that he and Julianne are sleeping together. Now, things are definitely worse for our heroes than before the story began. The central question of the movie seems to have been answered in the negative: this family meeting Mark has become a disaster.

12. Dark Night of the Soul (76-85): Annette rejoins dinner, completely stunned by what she found. At home, she confronts Julianne about the affair. They argue, and the kids overhear. Julianne sleeps on the couch. The kids don’t want to talk to her. Annette won’t speak to her. Their daughter confronts Mark on the phone. She tells him not to call again. Hope seems lost, for all five of them.

13. Break into Three (85): Mark calls Julianne, and says he wants to “go for it” with her. Shocked and disgusted, she reminds him that she’s gay, and hangs up on him. Julianne has made a clear decision, and thus the first steps toward mending the family have begun.

14. Finale (85-102): Annette and Julianne have a brief moment of civil conversation. When their daughter comes home drunk from a party, they confront her about it. She goes off on both of them. Later, the four have their last dinner as a family before she is going off to college. Mark shows up at the door, wanting to talk to her and apologize. She tells him she wishes he could have been “better.” Annette then has it out with Mark, calling him an interloper who needs to make his own family. It has the feel of a final battle, where a conclusive verdict is arrived at: Mark will not be part of this family. Julianne then makes a speech to the family about how marriage is hard, and she messed up, but they love each other. It has a healing affect on Annette. The restored family takes their daughter to college. They share a tearful and heartfelt goodbye.

15. Final Image (102): Their son smiles at seeing his two moms holding hands as they drive home from college. It’s a mirror to the opening image of him riding bikes with his “bad” friend. Perhaps he has been “helped to grow” in some way, after all.

Next week’s blog: from the Best of Blake

From the Best of Blake's Blogs: For the Love of Writing -- And Writing of Love