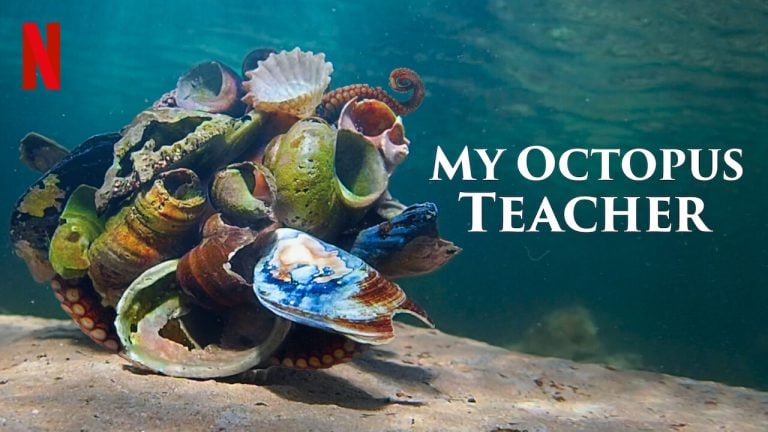 The Netflix documentary My Octopus Teacher seems to have been released at just the right time. In a year where our world discovered how closely we are all connected, one man discovered an equally important connection in the Great African Sea Forest. Winning multiple awards, including the 2021 Oscar® for Best Documentary Feature, My Octopus Teacher hits the beats while touching our hearts. Because it’s a documentary, the film doesn’t really have a B Story, as it focuses on the relationship with the octopus. Still, My Octopus Teacher is a powerful experience, and results in a story that resonates for all the right reasons.

Set-Up: Filmmaker Craig Foster grew up on an oceanside home in Western Cape, South Africa, entranced by the nearby ocean life. As an adult, he had been separated from it, and during one of his filmmaking documentaries in the Kalahari, he desires to become closer to nature. By that time, life had become rough, and he finds himself in a state of stasis = death. In his thesis world, he begins remembering his childhood, and he travels back to Western Cape. Soon, he starts to visit the underwater kelp forest again.

Theme Stated: At the beginning, Foster reflects, “You’re stepping into this completely different world. It’s such an incredible feeling, and you feel you’re on the brink of something extraordinary… but you realize there’s a line that can’t be crossed.”

Catalyst: One day while exploring, Foster comes across a strange mass of shells and items that are bunched up together, and an octopus soon darts out from it.

Debate: Intrigued, Foster follows the octopus and discovers its den. Wanting to learn more, he begins to visit each day, leaving a camera to capture its activities. The octopus slowly becomes more comfortable around him.

Break into Two: One day, the octopus reaches a tentative arm outside its den and touches Foster. In his upside-down, antithesis world, Foster will know what it is like to have a relationship with this incredible creature.

Fun and Games: Each of Foster’s visits results in a stronger bond between himself and his “octopus teacher.” He learns how she moves, hunts, and swims. The promise of the premise is seen in this exploration, and Foster witnesses her survival instincts in action, including her ability to camouflage. In one incredible incident, he witnesses the octopus “walking” on two arms at the bottom of the forest floor. One day, he accidentally startles it, and she swims away. He spends the next few days tracking her, learning as much as he can about her aquatic habitat.

Midpoint: After finally locating her, Foster realizes that an octopus is a nocturnal creature, and decides to watch her during the night. He sees her and witnesses her hunt fish, swim through shallow water, and become truly active.

Bad Guys Close In: After 125 days, Foster witnesses a group of pajama sharks pursue and attack the octopus. While she is able to hide from them in a crevice, one shark bites off an arm of hers and swims away. Helpless, Foster watches her swim away weakly, unable to camouflage herself. His internal Bad Guys plague him, wondering if his presence has caused the octopus to become hurt in some way. He questions whether she will survive or die, and when he returns one day, he discovers her arm has begun to grow back. The sharks try to attack again, pursuing her, but the octopus successfully evades them, even collecting shells around itself just as Foster had seen at the Catalyst. One day, he witnesses her “playing” with the fish around her, inspiring awe in him.

All Is Lost: On one of his next visits, Foster discovers a male octopus with her, and he knows her end is inevitable: the whiff of death is present. An octopus mates before the end of its life.

Dark Night of the Soul: Realizing the end is near, Foster is filled with dread. He knows her life is coming to an end, and he has grown attached to the octopus and has learned so much from her.

Break into Three: The octopus finally gives birth, releasing hundreds of thousands of young, of which only a few will survive.

Finale: Sadly, he watches her body wash out of the den, barely alive, to be fed on by fish and other scavengers. Heartbroken, he wants to hold her one last time, but understands he can’t interfere. As a shark carries away her body, he knows this amazing experience is over. Now in his synthesis world, Foster must take what he’s learned from the octopus and apply it to his own life. He begins to take his son out into the ocean with him, and the two discover a tiny octopus, possibly one of the babies.

Final Image: Foster reflects on all he’s learned. He states that being with the octopus has made him feel like he’s a part of this place, and not just a visitor. As his words come to an end, the scene lingers on the eye of his octopus friend as it closes.

Things You Save in a Fire Beat Sheet