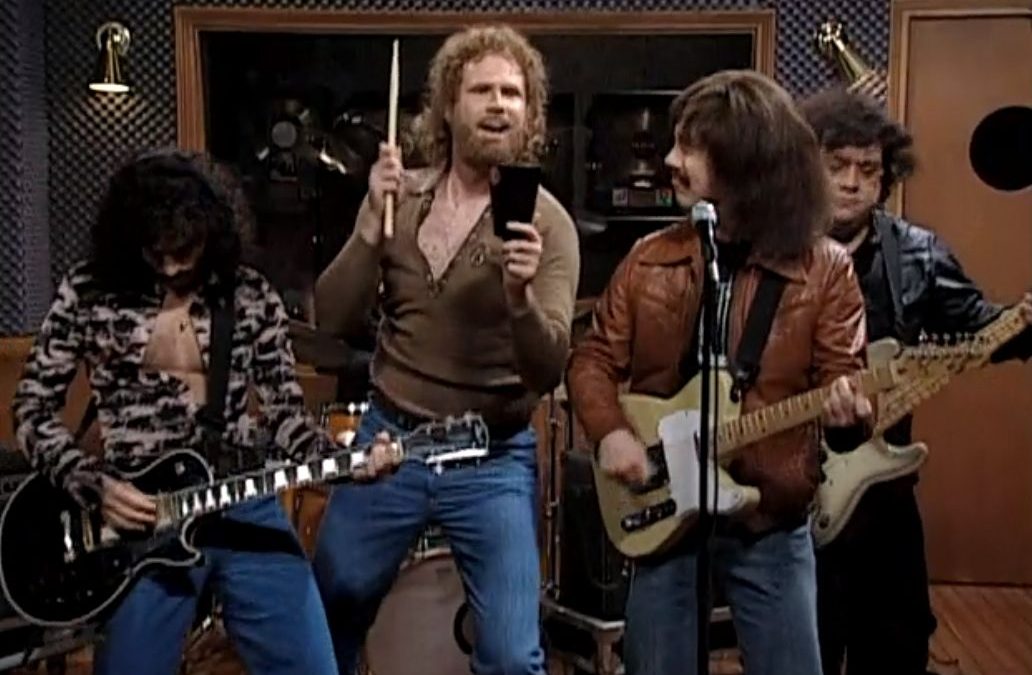 One of the most popular Saturday Night Live sketches turns 20 years old this week. Sites like Screen Rant rate “More Cowbell,” which originally aired on April 8, 2000, as the most popular SNL sketch of all time. In fact, one is prone to see a “More Cowbell” t-shirt while standing in line at the grocery store, or, if you’re lucky enough to own a Tesla, there’s a “Cowbell” Easter egg feature. Fictional Blue Oyster Cult “Cowbeller” Gene Frenkle even has his own Funko Pop figure, and he’s a hit on Halloween with cosplay.

Did you know that “More Cowbell” hits all the Save the Cat! beats, too? A piece doesn’t have to be a feature-length film or novel to tell an entire story. A well-rounded comedy sketch can hit all the beats in five minutes. Let’s rock this VH1 Behind the Music spoof with “More Cowbell.”

Written by: Will Ferrell & Donnell Campbell
Directed by: Beth McCarthy-Miller

How does the “More Cowbell” SNL sketch hit Blake Snyder’s story beats? Here is the Save the Cat!® beat sheet for the sketch:

Opening Image: Exterior shot of Sunshine Studios. Narrator: “After a series of staggering defeats, Blue Oyster Cult assembled in the recording studio in late 1976 for a session with famed producer Bruce Dickinson—and lucky for us, the cameras were rolling…”

Set-Up: The band, Blue Oyster Cult, consists of Eric Bloom (Chris Parnell) on lead vocals and guitar, Buck Dharma (Chris Kattan) on lead guitar, Bobby Rondinelli (Jimmy Fallon) on drums, Joe Bouchard (Horatio Sanz) on bass, and Gene Frenkle (Will Ferrell) on, uh, cowbell. Bruce Dickinson (Christopher Walken) glides into the recording room from the booth. They’re about to cut the track “Don’t Fear The Reaper.” Since the band has had a series of “staggering defeats,” the stakes are high that they create a hit—or it could be the end of them.

Theme Stated: The theme is tied into what will be the transmutation of Gene Frenkle. Can he deliver what he’s asked to without his bandmates wanting to kill him? For that to succeed, Gene’s innocence and determination, in a Pollyanna-like way, will win his bandmates over.

Catalyst: Bruce asks them to play the track, then he glides back into the recording booth.

Debate: Blue Oyster Cult begins with the memorable opening riffs of “Don’t Fear the Reaper”… except Gene Frenkle’s pounding on the cowbell with a drum stick irritates Eric, the lead singer. Eric will be the jealous insider who is integral to the Fool Triumphant genre. Bruce comes out to tell them that it’s good, but he wants to hear “a little more cowbell.”

Break into Two: The band attempts to lay down the “Don’t Fear the Reaper” track once more—and Gene is to “explore the space” with his cowbell.

B Story: Producer Bruce Dickinson is the helper who will guide the band, and Gene, to achieve musical immortality.

Fun and Games: The band attempts to lay down the track a second time. Here’s where we get the promise of the premise moment where Gene goes berserk on the cowbell, flailing around the studio… and irritating jealous insider Eric even more. (This physical comedy moment creates arguably the biggest laugh of the skit.)

Midpoint: False Defeat. The band is failing. Dickinson says that he wants more cowbell. “Fellas, you’re gonna want that cowbell on the track,” crossing and A and B Stories.

Bad Guys Close In: Like in all BGCI beats, here’s where things fall apart internally and externally for the group. Gene Frenkle plays the cowbell pointedly and close to Eric’s ear to antagonize him, and then out of musical time with the rest of the band. Then, Gene kicks over Eric’s microphone. The band turns on Gene. “Don’t blow this for us, Gene.”

All Is Lost: The band is worse off than they were at the beginning of the story. It’s the whiff of death. They can’t work together—and they’ll likely not get the track recorded.

Dark Night of the Soul: It’s not working for Bruce. “I got a fever—and the only prescription is more cowbell!”

Gene’s only contribution is the cowbell. He’s going to “play the hell out of it,” but if his bandmates don’t want him around, he’s going to leave and maybe lay down the cowbell later without them.

Break into Three: Eric has a change of heart. Gene’s passion and determination moves him. He Invites the “cowbeller” to “lay down the track right now.” The band decides to work as a team, stronger than ever, thanks to Bruce’s guidance, as A and B stories cross.

Finale: In perfect synthesis, the band storms the castle and lays down “Don’t Fear the Reaper,” which launches it into the annals of rock and roll history. They will be wearing “gold-plated diapers” thanks to Bruce Dickinson’s faith in Gene and them.

Award-winning author Don Roff has written nearly 20 books, primarily of a scary nature, for children and adults. His bestselling books include Werewolf Tales, Terrifying Tales, Ghost Hauntings: America’s Most Haunted Places published by Scholastic, as well as Zombies: A Record of the Year of Infection published by Chronicle Books/Simon & Schuster UK, and Snowblind from Brambleberry Books (currently in pre-production for an adapted film). His book, Clare at 16, is available on Amazon; the adapted film will star Madelaine Petsch (Riverdale) as the eponymous Clare. His book, Usher House Rising, a modern series retelling of Edgar Allan Poe’s short tale, The Fall of the House of Usher, will be available September 21, 2021. He has won several awards for his screenwriting, including the 2006 PNWA Zola Award for Screenwriting. Roff served in the 3rd Ranger Battalion in Fort Benning, Georgia. His darkly humorous and suspenseful radio anthology, Darkside Drive, is available as a podcast on iTunes. Visit him on his website, on Twitter, Instagram, and Facebook -- and buy Snowblind on Amazon.
View Calendar