The Importance of Putting Yourself into Your Scripts 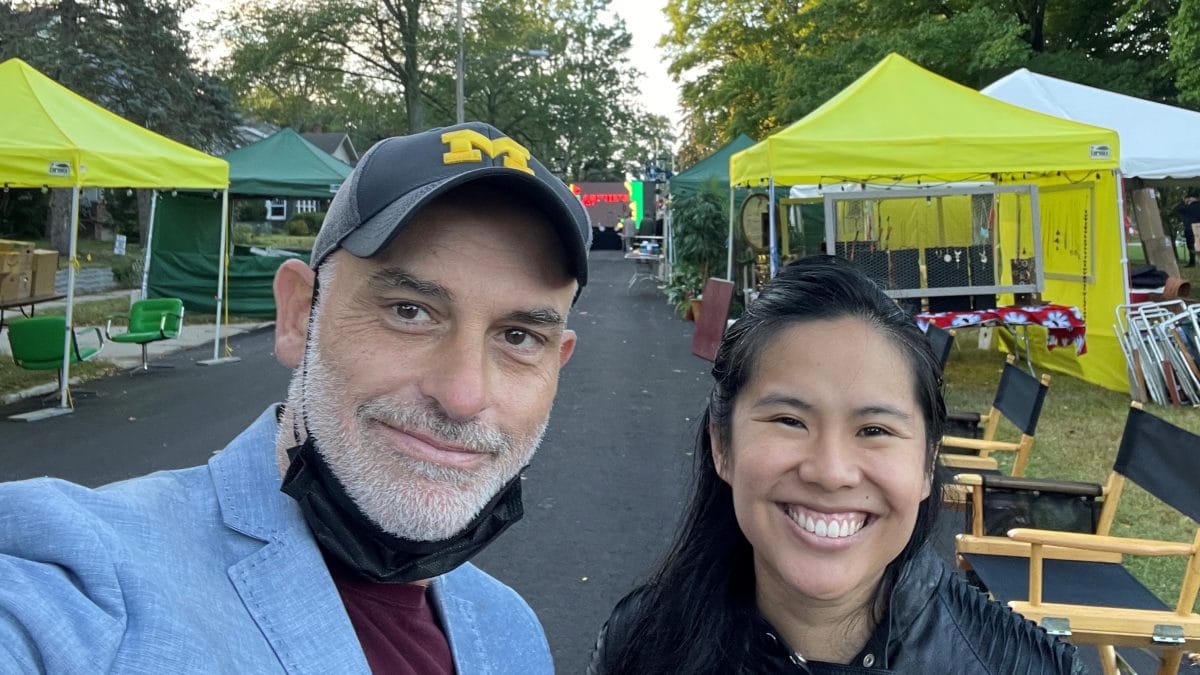 Writers Matt Allen and Krista Suh on the set of Block Party.

In today’s blog (despite Matt Allen’s solo bio at the end of this piece), writing team Matt Allen and Krista Suh explain what it was like to work on the first Juneteenth family comedy, Block Party, starring Antoinette Robertson, Academy-Award® nominee Margaret Avery, Golden Brooks, Luenell, Faizon Love, John Amos, Charlyne Yi, and more—coming out this summer from Branch Out Productions.

First of all, how did the first Juneteenth comedy, Block Party, even come to be? And how the hell did we… Matt and Krista… get to be writers on it?

Well… we were working together on a holiday movie called Black Friday with Kristin Chenoweth. At the same time, Matt’s wife and fellow producer, Lisa Mathis, started kicking around the idea of a summer comedy about a big neighborhood block party.

Mathis knew she wanted the movie to be set in a predominantly Black community of her hometown of Grand Rapids, Michigan, and inspired by the real-life characters she grew up with in that area. She was passionate about having a feel-good “Rites of Passage” story that didn’t fall into Black stereotypes, or Black trauma. Lisa also knew that the story should revolve around a recent Harvard grad named Keke, who is forced to come home and run the block party this year.

Of course, with a movie called Block Party, storytelling law dictates that something must go wrong with the block party—and our protagonist must fix it. Lisa had outlines for most of the characters, the settings, the look, the feel, the music, almost everything… but we still needed that one major conflict. What would force Keke to have to run this block party? Lisa and Matt were stuck.

Enter a casual conversation with Krista—and because she was having real-life challenges with her grandmother’s dementia—the answer came immediately.

This was her pitch: The block party has been run for 40 years by a super competent, charismatic, and organized grandmother. Call her Grandma Janice. Janice is a pillar of society, someone who seemingly single handedly throws amazing get-togethers, the glue that keeps a community together, the person in the room who always helps, but never seems to need help. But this year, something is off: the block-party planning is showing cracks and it turns out, Grandma Janice has dementia. Through no fault of her own, she has not been able to plan the block party this year, and if the party is to go on, there’s only one person that can help: the reluctant hero and recent Harvard graduate, Keke.

All of us knew instantly: This was the way to go.

A few weeks later we got formally hired by Branch Out Productions to write Block Party, alongside Lisa. Of course, in many ways, this is Lisa’s story, not ours. The barbershop in the movie where the community comes to gather is based on her cousin’s real life barbershop, House of Styles. The owners Debra and Daryl are played by Luenell and Richard “The Rev” Hartley. The main character Keke, played by Antoinette Robertson of Dear White People, is based on Lisa’s niece. In fact, almost all of the characters in Block Party are based on real people in Grand Rapids.

As screenwriters, it was our job to help bring Lisa’s story and characters to life. At the same time, to do our job well, we had to put ourselves into it, our experiences and our quirks—regardless of our color or our gender—to breathe life into the story. There’s no other way.

And so we worked with Lisa, our actors, and of course our director, Dawn Wilkinson, to bring our experiences into the mix. If it worked for the character and felt authentic to Lisa, Dawn, and the actors, we kept it. If it didn’t pass muster with the team… it was gone.

There are four examples that came from “us,” but became more universal after the process with Lisa and the team:

With any of your projects, even when the story is not your own, know this: While it is your job to stick to the assignment, the unspoken rule is that you must always dig deep and bring your own experience to it and see if it fits. If we made the story overly about us, there’d be a lot more karate (Matt) and pussyhats (Krista) onscreen, but we killed our “darlings”! Yet the darlings that made the cut have become essential to Block Party.

At the end of the day, Block Party is a whole that is greater than the sum of its parts, with creative contributions from the writers, director, actors, and more. We hope you enjoy watching it this summer (and every Juneteenth thereafter!) as much as we enjoyed creating it!

The Last Thing He Told Me Novel Beat Sheet Analysis