Beat Sheet for “The Office” Episode You Haven’t Seen 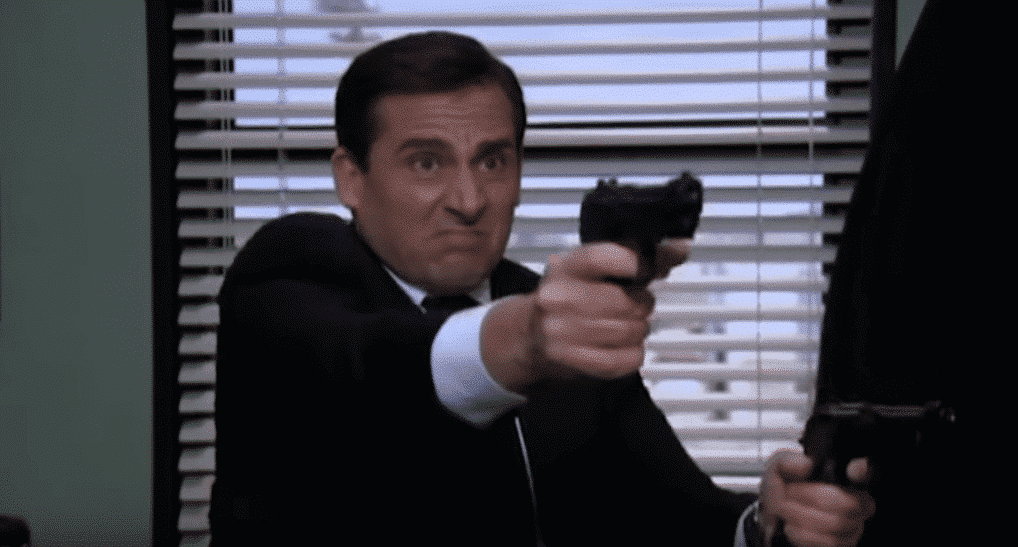 Last month, NBC quietly released an unaired episode of “The Office” to Youtube.

…Well, sorta! The full-length “movie” that was Michael Scott’s DIY cinematic masterpiece, Threat Level Midnight, first appeared as a special feature on the Season 7 DVD set, but in December, it was officially uploaded to the web in its full, 25-minute glory. Featuring just about every member of “The Office” cast over seven seasons—hilariously recast in a spy thriller that at times feels too sincere to be a parody—Threat Level Midnight is a PERFECT parody that hits every spy genre cliche, as well as all the beats!

Check it out below and then—like Michael Scott does with “The Scarn”—allow us to break it down!

How does Threat Level Midnight hit Blake Snyder’s story beats? Here is the Save the Cat!® beat sheet for the episode:

Opening Image: Michael Scott is hard at work in his office… when suddenly a delivery man attempts to snuff him! Wait, this isn’t Michael Scott! It’s super spy “Michael Scarn” (and it turns out Scott isn’t working. He’s filming an action movie on company time). Scarn handily dodges the assassin’s bullets, then shoots him with the loaded guns he has stashed under his desk. “Clean Up on Aisle 5.” 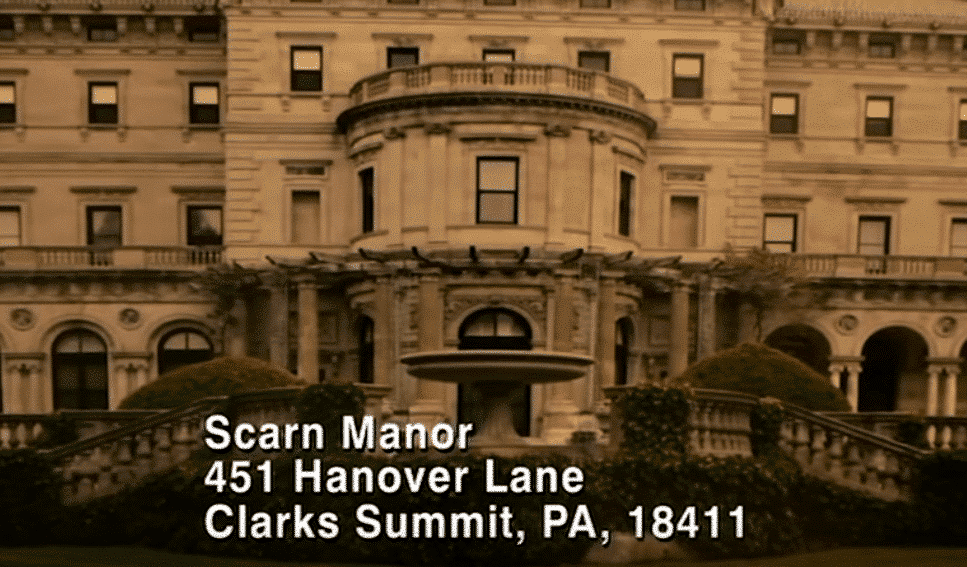 Theme Stated: When a robot butler—played by Dwight—comes in to rouse Scarn from slumber, Scarn mutters, “Let me dream.” This is, after all… the purest Michael Scott fantasy. Through the course of this movie, we’re going to see Michael “Scarn” do everything a regional manager at a paper company could only hope to do: be a spy, meet the president, get the girl, kill Toby, save the day.

Set-Up: And while we first met Scarn with his guns blazing, we now encounter him as a shadow of the superspy he once was. He’s retired, drunk, and unable to recover from his wife’s murder. “Don’t say her name…” But this morning, he learns from his butler that the President has called because Goldenface is up to no good. “This makes it personal.”

Catalyst: The President (played by Darryl) informs Scarn that Goldenface is back to his old tricks. Having once successfully blown up a WBNA all-star game where Scarn’s wife met her end, he’s now threatening to blow up the NHL all-star game. Scarn is asked to intervene. “I can’t sugar coat this,” the Commander-in-Chief says. “We’re at threat level: Midnight”

Debate: The debate moment boils down to a coin flip. “Heads I do it, tails I don’t. Best out of 7.” As every flip of the coin and its outcome is depicted, this scene is a real nail-biter.

Break into Two: Heads. Which means Michael Scarn will take the case. “Looks like there’s going to be a clean up on Aisle 5.”

B Story: We’re reminded of Scarn’s unresolved angst over his dead wife as Goldenface (Jim Halpert) torments the hostages he’s taken in the stadium. “I have unfinished business with Scarn, and you’re my trap. See I am gonna lure him here, then I’m going to kill everybody. Then I’m gonna dig up his wife’s dead body…”

Fun and Games: Scarn learns how to ice skate from trainer Cherokee Jack (Creed). He “mops the ice” in a training montage, and then skates in a race against a speed skater (Oscar) and Goldenface in disguise. But the ensuing gun fight catastrophically causes Scarn to lose the race, making it absolutely necessary for him to kill the winner in order to secure his spot in the all-star game. Scarn then goes undercover at a jazz club to find out where the hostages are being kept, which he accomplishes by getting the club singer (Jan) to fall in love with him.

Midpoint: Goldenface kills one of the hostages! But it’s alright because it was Toby, and Scarn reveals that he was a wanted animal rapist, anyway. But Goldenface has more surprises in store for Scan. He reveals that the bomb will be in the hockey puck at the all-star game. “I will diffuse the bomb and release the hostages,” he proposes. “All you have to do is forgive me for murdering your wife.” And when Scarn refuses, Goldenface shoots him, and the bullet goes through every major organ in his body: his brain, his lungs, his heart, his back, and his balls. But it will take more than that to kill Michael Scarn!

Bad Guys Close In: Fully recovered in practically no time at all, Scarn goes to brief the president on everything he’s discovered and learns that the President and Goldenface have been working together all along! The supervillain was hired to blow up the stadium so that the President could collect the insurance money!

All Is Lost: And while Scarn would normally be able to respond to this escalation of threat level: midnight, Goldenface reveals that he had captured Scarn’s murder of the speed skater on tape. “No, it wasn’t like that at all!” he protests as he and his robot butler make their escape from the President’s office.

Dark Night of the Soul: Michael Scarn walks in the rain, lamenting the unfortunate turn of events. “Where had it all gone wrong?” He wanders into a bar to wallow and to confide in the bartender (Andy Bernard). “I’m too depressed to save the big game, Billy,” he mopes. And in case you don’t catch on to where the character is in his journey, Scarn spells it out: “I’m at my lowpoint.”

Break into Three: Things start looking up when a table of bachelorettes (played by a Meredith, Phyllis, Angela, Karen) invite Scarn to “ride the sex choo choo” and Scarn chooses instead to teach them—step by step—”The Scarn.” The unforgettable dance sequence gives Michael Scarn his confidence back. He sets out to stop Goldenface once and for all. 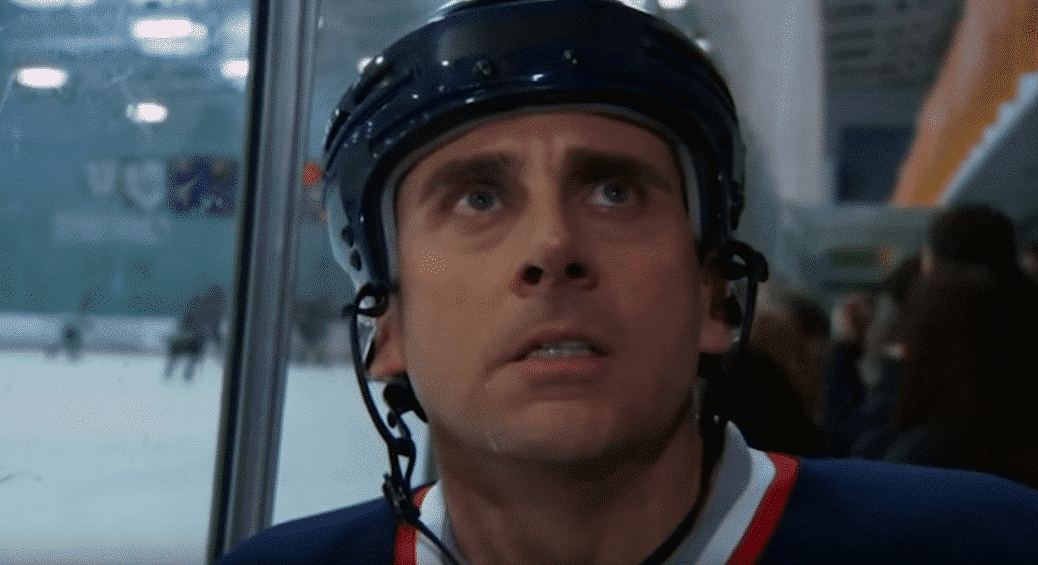 Finale: Scarn knows he has to get to the puck between periods or the stadium will explode, but he encounters his first setback right away: he learns that his mentor Cherokee Jack has died! Heartbroken, he steps out onto the ice, and despite all his training, can’t seem to get to the puck. With only one minute left in the period, Scarn digs deep down and gets a final message from Cherokee Jack: “I want you to take all your frustrations. With women, the system, with everything. Take it out on the puck. All on the puck.” And with that, Michael Scarn executes the new plan: he smacks the puck harder than humanly possible and it ricochets around the world… releasing the hostages, shooting into space, bouncing off a satellite, and landing in Goldenface’s lap before exploding. Superspy Michael Scarn saves the day! Was there ever any doubt? 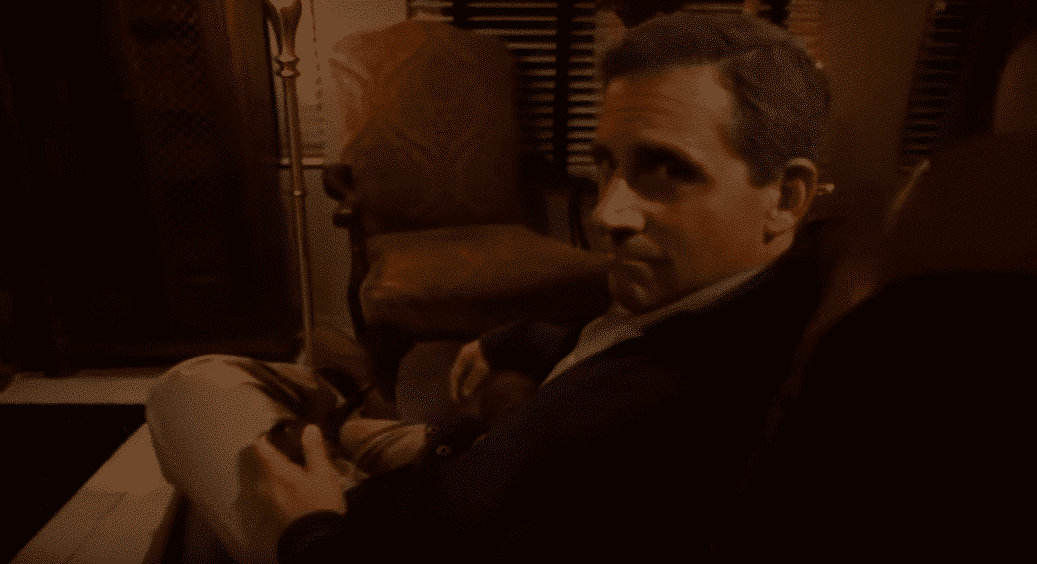 Final Image: And finally, we see Scarn at home relaxing by the fire and we learn that the narrator—whom we could have sworn was Morgan Freeman!—was Michael Scarn all along.

Cue credits… with an original song written by Michael Scott!