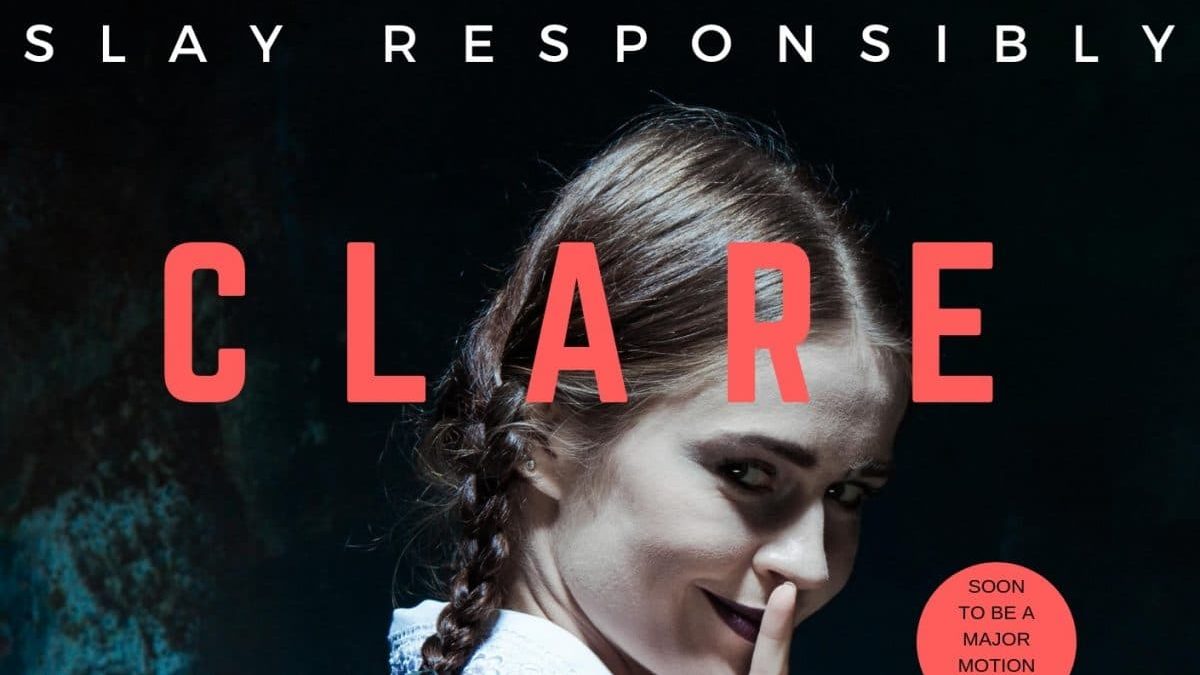 Save the Cat! “Monster in the House” monthly contributor, Don Roff, has some killer news. His darkly humorous, young adult thriller, Clare at 16, has recently been announced as a film. The first book, which is a proposed series of six books, will be out in 2019. Don’s previously known for his bestselling book, Zombies: A Record of the Year of Infection, published by Chronicle Books/Simon Schuster UK. His chilling horror novel, Snowblind, has also been announced as a film.

Clare at 16 tells the story of Clare Bleecker, a 16-year-old girl who attends DeFeo Catholic School in the bucolic, tourist town Pickman Flats, Washington. To the world, she appears to be a normal teenager, an animal lover, and devout vegan living with her grandparents… but like the town she lives in, Clare is more than she appears to be. Underneath her reserved appearance lives a sociopath with dissociative identity disorder—a serial killer.

Mark Pavia, who wrote and directed Stephen King’s cult classic, The Night Flier, and the more recent horror film, Fender Bender, for Shout Factory (currently available on Shudder), will adapt the novel into a script and direct. David Chackler at Dead Rabbit Films serves as executive producer. Chackler’s credits include co-producer of John Carpenter’s Village of the Damned, as well as music supervisor on such horror classics as Fright Night and Child’s Play. Dennis DeFrehn is attached to produce, and additional executive producers include Dave Sereny and Nadia Redler (Fender Bender and Fear X).

Marilyn Vance, who created the iconic looks for all the best John Hughes films (The Breakfast Club, Weird Science, Ferris Bueller’s Day Off, and Pretty in Pink, as well as Die Hard, Predator, Pretty Woman, and who was nominated for an Oscar® on her work for Brian DePalma’s The Untouchables) will handle the costume design. Academy Award®-winning film composer Joe Renzetti (Child’s Play, Poltergeist III, and The Buddy Holly Story) will compose the film’s score.

We sat down with Don for a few hopefully revealing questions:

What was your inspiration for Clare at 16?

It’s hard to nail down one thing that inspired me, it was several, but it initially started off with a darkly humorous internet meme.

After I read that, I started hearing this voice in my head, a voice of a girl that wanted to get out. The name Clare Bleecker sort of popped into my head after that. This is one character who kind of came fully formed, like Zeus giving birth to Athena from his skull. The writing process began shortly after that. Another thing that inspired me was books like Charles Portis’ True Grit, Mark Twain’s Huckleberry Finn, and J.D. Salinger’s The Catcher in the Rye.

I love books that start out with these strong, bombastic, opinionated characters that you just can’t ignore. You just want to keep turning pages and see the world through their eyes. I also wanted to write something kind of short and stripped-down like those great Richard Stark Parker novels. You know the ones, where the action begins at the first sentence, so I wanted to create a first-person account of a unique character but also have it be a crime novel. I also wanted to keep the tone darkly humorous, like that meme.

Tell us a little about your writing process.

I averaged about 10,000 words per week and put the first draft down in six weeks. I had the most fun I’ve ever had writing anything. Mostly I felt like a typist while Clare Marie Bleecker dictated. It sounds crazy, but that’s the best way I can describe it. I’ve never had a character who spoke to me so clearly and demanded to be put on the page. In fact, after writing two Clare Bleecker books (I wrote Clare at 17 already), it’s hard to not hear her voice. She kind of drowns out all of my other characters who are trying to swim up that salmon ladder to spawn their stories.

My main rule for writing it was always asking myself the question: What Interesting Thing Could Happen Next? That was about it for the outline. The number one cardinal sin of any story, be it novel or movie, is to be boring. It’s a pretty good sign that if you’re not bored with what you’re writing, it won’t be boring to the reader either.

When I revised the novel, I wrote up a Blake Snyder Beat Sheet, which is the first time I’ve ever done this post-writing and it really helped. The genre, I determined, was Comic Book Superhero (even though Clare is more of an anti-hero). The Beat Sheet really helped me see where the story needed strengthening and emphasis, particular in the Theme Stated and B Story beats.

The book has some screenplay passages. Can you talk a little about those?

Well, Clare fancies herself as a storyteller. However, she’s committed these murderous crimes against men who attacked her. The book is actually her confession. In David Morell’s great book on writing, The Successful Novelist, he uses James Dickey’s novel Deliverance as an example. It’s a first-person narrative and the character of Ed Gentry agrees with his friends never to talk about the events on the Cahulawassee River. However, Ed’s writing a damn book about it!

So, why would Clare admit to all this stuff? Well, I figured the book is really in the form of a confession. And who confesses? Catholics, so the setting was in place at a Catholic school. It all jelled. With the screenplay passages, they kind of happen in Clare’s mind, like cinematic memories. Mostly flashbacks and her demented fantasies happen in screenplay form. They’re her little mind movies. Plus, Clare dabbles in fiction and thinks of herself as a frustrated screenwriter (aren’t we all?).

How was the adapting process for your book?

Clare at 16 is the second book of mine to be adapted into a movie. My first was Snowblind, about a group of Army Rangers who find themselves snowbound in a haunted lodge, which is gearing up for filming hopefully this year. In each case, I talked to the screenwriters daily, usually on Facebook Messenger, as they wrote. (Occasionally we would go to the phones for longer meetings.) It was really a fun time. I feel spoiled that my input was so valued by the screenwriters and the producers.

Another great thing is that it was a huuuuuge learning experience. The screenwriters, Hank and Mark, asked all the tough questions about my books. And sometimes I didn’t have the answers. It made me really look at my work in a new light—about why I did things and mining narrative potentials in future books. I’ve had author friends who were left by the road as the film producers grabbed their book and ran with it, not even inviting them to the movie premiere. But I’ve been lucky. So lucky, in fact, that any future adaptations will be held to that same standard. Haha.

Anything that you want to say to budding writers?

If you have something you’ve written, and feel strongly about, get it to people. If you don’t know many people, get it to someone who can get it to someone. If what you wrote is as strong as you believe it is, people will be excited. I wrote Clare at 16 and sat on it for four years. Though I knew in my heart of hearts that I had written something special, and fun, it still wasn’t enough to have 100% faith in myself.

I always find excuses not to send things out, and that’s mostly due to poor self-esteem and lack of faith in myself. I’m working to cure myself of that, and believing in yourself and your ability is the best way to start. It might save you years of waiting around for something to happen, too.