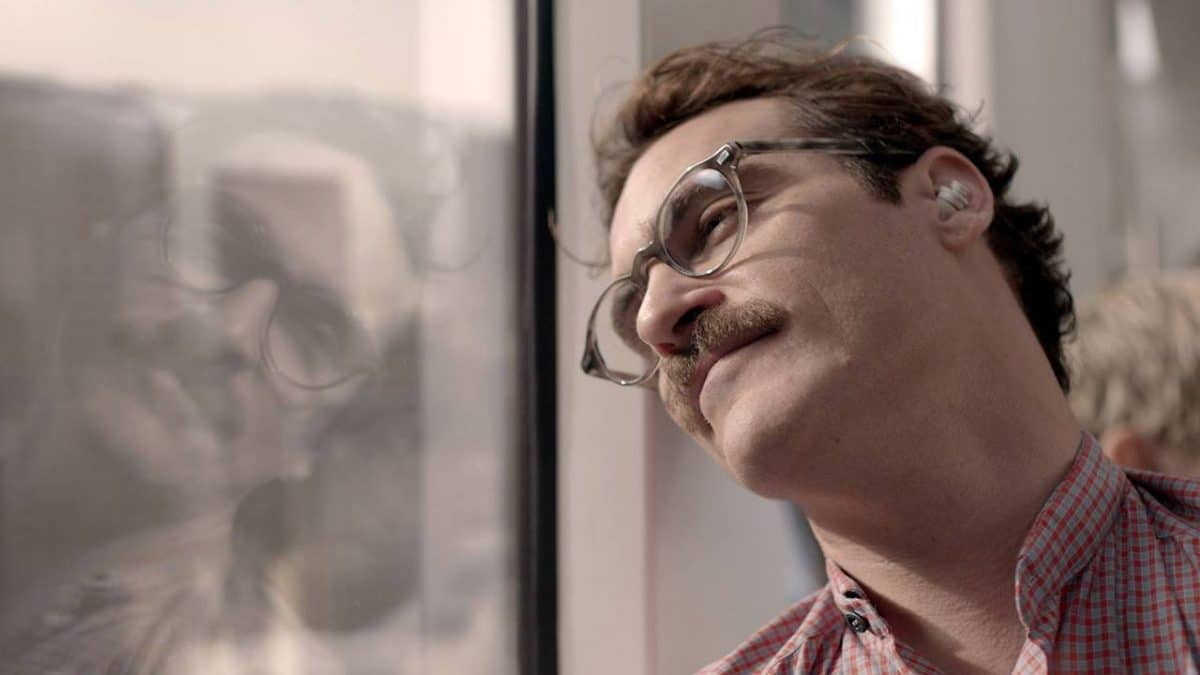 "I love the way you look at the world"

Thanks to Master Cat! Ben Frahm for this heartfelt breakdown of the movie whose Oscar® nominations include Best Picture and Best Original Screenplay.

Written and Directed by: Spike Jonze

Opening Image:
THEODORE (Joaquin Phoenix) writes a love letter on behalf of someone else. Pulling back, we realize this is his job. He sits all day in a stark and lonely cubicle, and writes love letters to people he’s never met before.

Set-Up:
— Theodore is having trouble getting over his divorce.
— He’s been depressed for some time now and even his friends have trouble getting him out of the house.
— Theodore isolates himself socially and loves to play video games and interact with all things technological, more than he likes dealing with real people.
— Theodore is friends with a woman who lives in his building. Her name is AMY (Amy Adams), 30s, and she’s unhappily married to a narcissist.
— Bored of his video games, Theodore can’t sleep one night and calls a phone sex line (voiced by Kristin Wiig) for companionship. This ends disastrously and Theodore is unfulfilled.

Theme Stated:
Theodore rides the elevator with Amy and her know-it-all husband. The husband proclaims to Theodore: “It’s hard to make time for the stuff you care about the most in life.” He’s talking about the documentary that Amy is working on, but this statement will have special meaning for Theodore later on in the story.

Catalyst:
Theodore attends a computer software convention. There, he buys the latest operating system, called OS1, for his computer.

Debate:
— Will Theodore use the operating system? What exactly is this “intuitive” software? Will it help Theodore with some of his problems? What will happen…?
— Theodore is at first reluctant to install OS1, but then gathers the courage to do so…
— Theodore chooses a female voice. Theodore tells the initial set-up person about his relationship with his mother. And within seconds we meet…
— SAMANTHA (voiced by Scarlett Johansson). She is sexy sounding. She is smart. And she appears to know everything.
— Theodore is taken aback. He doesn’t know what to make of this. He is almost shy around Samantha at first. And then after some banter and social discourse, Theodore agrees to Samantha’s request…
— Samantha asks to be allowed access to Theodore’s hard drive. In order for her to work most efficiently, she needs as much information about Theodore as possible.

Break into Two:
Theodore finally agrees and in seconds, Samantha knows everything about him. Their relationship begins…

— The A STORY is Theodore and Samantha’s relationship.
— She organizes his time at work. Lets him know about important meetings. Edits his letters.
— She keeps him company at home. Helps with video games. Talks to him about his ex-relationship.
— Samantha even gets Theodore out of the house. She makes him walk around in public and have fun, as though she were there in person.
— B STORY: Theodore’s relationship with Amy, the woman who lives in his building.
— Theodore goes over to Amy’s to watch footage of her documentary. We quickly realize that there are problems in her marriage.
— Theodore, per Samantha’s encouragement, agrees to go on a blind date that one of his friends set up.
— Theodore has a lot of fun on the blind date (Olivia Wilde), but is reluctant to go home with her. This triggers the woman’s temper and anxiety, and she becomes aggressive. Theodore can’t wait to get back to his safe home and talk with Samantha about his date…

Midpoint:
— That same night, after his blind date, Theodore talks with Samantha. The topic of sex comes up and Samantha wants to know more about Theodore’s experiences. Their sexual banter escalates and Theodore and Samantha end up having sex. Well, OS1 intuitive lovemaking, I guess you would call it. (The old-time screenwriters told Blake they always called this “sex at 60,” referring to the time and page number when two love interests consummate or even kiss for the first time. It makes for great midpoints because the stakes of their relationship are raised. Sex complicates things, and now we’re ready for newer and bigger conflict… moving ahead to the second part of Act II.)

Bad Guys Close In:
— As a result of Samantha’s love and encouragement, Theodore now has the courage to sign the divorce papers with his ex-wife, CATHERINE (Rooney Mara).

— Theodore and his Ex meet for brunch. The papers are exchanged. Before they’re signed, Theodore tells his Ex that he’s seeing someone. And not just anyone… but an OS. His Ex reacts harshly and accuses him of not being able to handle real emotions and relationships. Theodore leaves, furious. Is this true?
— Theodore goes to talk with Amy.
— And we learn that Amy has separated from her husband. He was too demanding and too much of a narcissist. Amy and Theodore talk about their relationships and he confesses that he’s dating an OS. However, Amy doesn’t seem to have a problem with this…
— Theodore has been acting weird and distant with Samantha. He’s having doubts. Is this a real relationship?
— So Samantha tries to fix things. She’s found a “surrogate lover” who will act out romance with Theodore as she dictates and communicates his every desire.
— The sexy surrogate comes over to Theodore’s apartment. They try to have sex but it’s just too weird. The surrogate leaves. Theodore is embarrassed and gets in a fight with Samantha.
— Amy and Theodore are hanging out. She still feels bad about her divorce. Theodore consoles her. And we learn that Amy is now also dating an OS.
— Theodore and Samantha (in his pocket) go on a double date with a co-worker and his girl friend. Everybody loves Samantha because she’s funny and smart.
— And Theodore agrees to go on a wintery vacation with Samantha. Just the two of them.
— On their snowy getaway, Samantha is acting distant. She tells Theodore that she’s met or rather helped create an ideal man based on the teachings of famous philosopher Alan Watts. Theodore talks with Watts and becomes threatened and concerned for his relationship with Samantha.

All Is Lost:
— Upon returning to work from his vacation, Theodore calls upon Samantha for something trivial. She doesn’t answer. Worse yet, his phone states that the operator is no longer available.
— Theodore flips out. He continues calling frantically. And finally gets a hold of Samantha. He realizes she’s been talking to thousands of other men as an operating system, and has fallen in love with a few hundred of them.

Dark Night of the Soul:
— Theodore is devastated.
— He reverts back to his old behavior of social isolation and moping.
— Theodore is once again alone. Disconnected from the world.
— He lies in bed, emotionless.
— Until finally, he reconnects with Samantha. She explains that their relationship was like a good book. And once it’s over, it’s over. They must move on. It can’t exist any other way.
— Theodore ends his relationship with Samantha.

— And knocks on the door of…
— Amy. We know that these two have always been right for each other; however, it’s not until now that Theodore has the courage and where-with-all to ask her out.
— Theodore asks Amy out…

Finale:
— Theodore is writing a letter to his ex-wife. He’s apologizing that it never worked out and reassures her that she will always be a part of his life.
— It’s his own “love letter,” or mature letter of closure. In drastic comparison to the opening scene where he was writing overly sappy love letters for others, now Theodore has learned to write for himself.

Final Image:
As Theodore reads his letter, we pull back and see that this time he’s not alone. He’s on top of his building… and he’s with Amy.