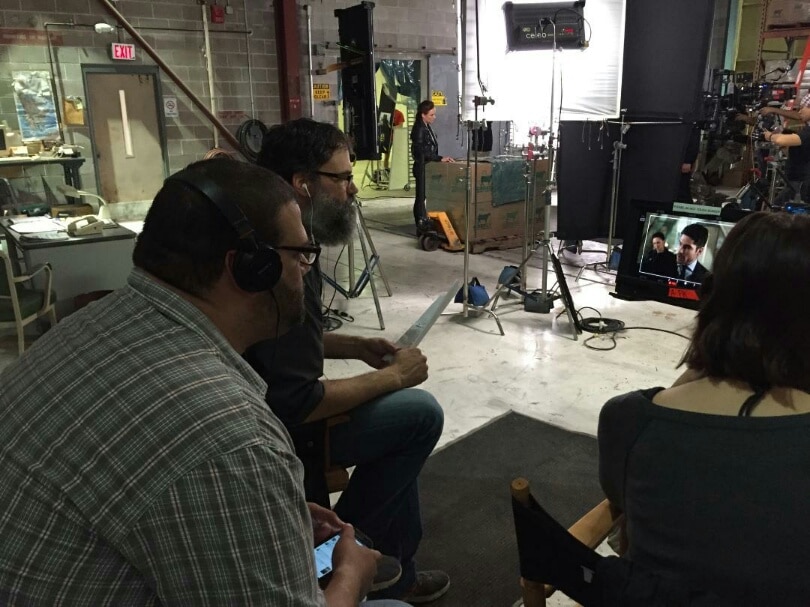 Al Rodriguez on the set of "From Dusk to Dawn"

You’ve got a story to tell. You know the world of your story to the very last detail. You have a Big Idea, so big you can hardly believe it’s yours. Everything about it is compelling. But who is your hero and why?

Story ideas for scripts come from different sources — sometimes you start with a concept, a title, a scene, a character.

If you start from concept, your Big Idea might be expressed in any number of ways. “Bingo!” you think. “Franchise!” But even franchises start somewhere, and you have to find the right window into the house of your Big Idea. It all comes back to the question: Whose story am I telling? In other words, who is your hero?

Sometimes story begins from a character. A Dude With a Problem, perhaps. You have a strong sense of who this Dude is. He or she has certain characteristics, both physical and emotional. These make their way into your logline as you set up what your story is going to be about.

Whether your hero is a burned-out cop on the edge of divorce or an eager-to-advance rookie FBI agent, an out-of-work actress or a once-successful novelist, his or her identity presents you with an opportunity to exploit and maximize the effectiveness of your story.

It’s really as simple as Set-ups and Payoffs. One of the easiest things to overlook sometimes is, by the time you’re getting into the script stage of the process, you think you know your hero pretty well and begin to take some things for granted.

That’s why it’s important to remind yourself why your hero is your hero. You chose your hero as the vehicle through which your story is told. You’ve endowed your hero with a flaw, many strengths, a goal, obstacles to overcome, and an amazing journey of transformation.

Remind yourself that these characteristics are Set-ups that must have Payoffs. I think this is certainly the case with strengths, but weaknesses, too. The Set-up is the attribute or characteristic, but the Payoff is using that strength (or weakness) in a new context and in unexpected ways.

Failure to do this is an example of the adage that Third Act Problems are really First Act Problems. Defuse this bomb before it goes off and wrecks your ending.

Here’s how you show why your hero is your hero: During the Finale, in the Dig Deep Down moment, your hero uses some Ordinary World skill — one of those things that define him — in a New World way. It’s the moment that illustrates the hero’s rebirth through application of the lessons learned in All Is Lost and the Break into Three while at the same time illustrating that the seeds of transformation were there from the beginning.

Let’s take our examples above – the burned-out cop on the edge of divorce and the rookie FBI agent eager to advance. In the former, you’re starting with a character on the verge of giving up both professionally and personally. In the finale, you have the opportunity to “cross the streams” and show this cop/husband use something that was a weakness or flaw to his advantage and find the strength to act, to not give up.

In the second example, the rookie FBI agent eager to advance, you have the opposite character, someone starting from a point of ambition, perhaps suffering from too much of a good thing that she overlooks the obvious or disregards what should have been a warning sign that she was being set up for a fall. In the finale, she sees the thing that was there all along because the wisdom gained through his All Is Lost and Dark Night of the Soul knocked the blinders off and gave her the insight. It wasn’t about rising to a certain level of prestige and power after all because, as novelist/screenwriter John Irving noted, “An underdog is in a position to take a healthy bite.”

Save the Cat!® Podcast: Blake Snyder on Tootsie