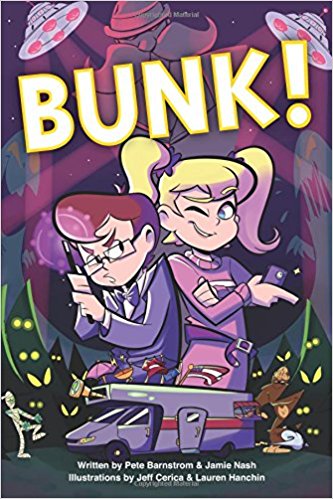 In a funk? Get BUNK! Great news from Blake Snyder’s good friends, Jamie Nash and Pete Barnstrom: their new children’s book was published this week.

And it’s really something different. The heroes: a cheese-ball magician named Baxter and his debunking partner, Berni. Baxter solves Mysteries of the Unexplained. Using his knowledge of magic and illusion, along with Berni’s smarts and common sense, they’re called into cases to expose the cheaters and tricksters who want to fake us out with monsters, spooks, and space aliens!

In this adventure, Baxter’s parents are framed for an impossible robbery using real magic powers, so it’s up to Baxter and Berni to travel to the famous magic palace and save Baxter’s mom and dad from being sent to jail!

In the tradition of classic kid-detective stories, BUNK allows young readers (and the young-at-heart) to crack the spooky cases alongside Berni and Baxter. Every page and picture provides the clues you’ll need. So look sharp, pay attention, and get ready to BUNK!

Save the Kitten: STC! and Micro-Shorts

Get Out Beat Sheet