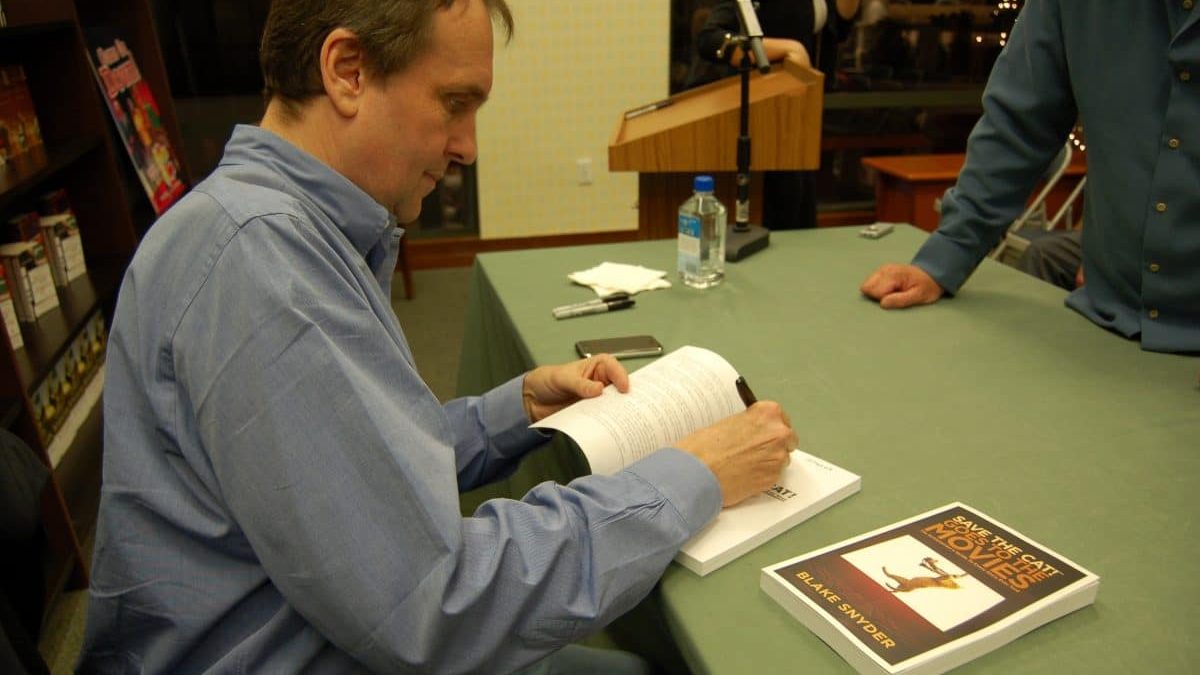 Blake signs "Save the Cat! Goes to the Movies" at the Barnes & Noble store at the Grove in Los Angelles

In last week’s podcast, Blake described his 10 genres or story types. Those descriptions included some key terms, which we define for you today — each listed under the appropriate genre name.

Institutionalized
Brando – The rebel. Named for Marlon Brando, who portrayed motorcycle tough Johnny in 1953’s The Wild One, this is the radical who defies the system and doubts everything about the family, business, or group that has stood the test of time.

company man – The one who has so bought into the establishment that he has sacrificed his humanity for it, resulting in robotic side effects that often include sexual dysfunction and a general crankiness, e.g., Frank Burns and Margaret “Hot Lips” O’Houlihan in M*A*S*H.

naif – The character that is “us,” such as Jane Fonda in 9 to 5 and Tom Hulce in Animal House, who, by being brought into the system, helps explain its rules.

Whydunit
case within a case – Usually the initial or long-buried caper that for some reason is unresolved. By pursuing another case, the detective revisits the original — and cracks both.

turning over cards – Describes any progression that reveals the plot points of a story. In a Whydunit, it’s the series of clues leading the detective to a final secret.

Buddy Love
chase to the airport scene – In any movie with a love story at its heart, invariably one lover will leave near the end, prompting a frantic “chase to the airport” to stop him or her, e.g., Woody Allen in Manhattan. This big finish is re-freekin’-quired according to every studio exec you will ever hear on the subject… so be prepared with yours!

complication – Typically in a romantic comedy or love story, the sabot in the machinery: the person, place, or event that stops the lovers from being together, e.g., the iceberg in Titanic, the bet in How to Lose a Guy in 10 Days, and the fact that Matthew McConaughey lives at home in Failure to Launch. Ironically, it is also the thing that keeps the lovers together — and is usually what your rom-com is “about.”

Out of the Bottle
confidant – A person the hero can trust with the secret of his magic power — and sometimes the one who uses that information to harm the hero (so much for trust).

double mumbo jumbo – In movies using “magic,” the tendency of the writers to pile it on, or use several forms of it, and unwittingly make the story feel fuzzy or confusing. The rule is: We, the audience, are allowed to suspend disbelief once in a movie. You cannot be led to believe aliens and vampires exist in one world.

learns to do it without the magic – Usually a beat found in any movie using “magic” that indicates a change in the hero in Act Three. Up till then the hero has been empowered — or cursed — with some form of magic spell, and now must choose not to use the magic in order to learn a lesson, e.g., in Bruce Almighty when Jim Carrey does good deeds without using any of his godly powers. But this is a general term, too, used for movies without magic. It can indicate any Act Three change where the hero “learns he had it in him all along” or “learns he already possesses the bravery or skill he needs to win.”

rules — The magic needs these parameters, guidelines, or boundaries to keep what happens credible. State The Rules up front and stick to them!

Dude with a Problem
eye of the storm – The break from the fast-paced, confusing, and dangerous situation our innocent hero suddenly finds his bad self in. It can be a friend or a love interest who also offer the hero a needed lesson.

Fool Triumphant
fool assumes a new name – When the hero enters Act Two and takes on a new moniker, e.g., when “Michael Dorsey” becomes “Dorothy Michaels” in Tootsie. The name change usually occurs as a disguise or by accident.

insider – The jealous one who realizes the “idiot” is wiser than everyone and seeks to stop him before others see this too, e.g., Salieri in Amadeus.

Monster in the House
half man – The partial survivor who has had an interaction with the monster in his past and comes away damaged in some way because of it. This is the “false mentor” who can tell the hero — and us — the horror of what dealing with the monster will entail — and who is sure to die (usually at page 75)!

Superhero
mascot – The loyal and very human underling who looks up to the title character but can never be him, e.g., Jimmy Olsen in Superman and Timon in The Lion King. Often used by the Nemesis to threaten the Superhero.

Golden Fleece
road apple – The thing that stops the team from gaining the prize. It’s the setback, surprise backstab, or bit of new information that makes the participants think they will never win the day, e.g., when Tom Hanks and company find Private Ryan — and he refuses to go home.

all stories are about transformation – This is not a Hollywood term… it is our motto! It should be printed out and put on top of our computers as a reminder of why we do this job. No story is worth telling unless change occurs in the hero — or in us, the audience. And the bigger the growth, the more epic the tale.