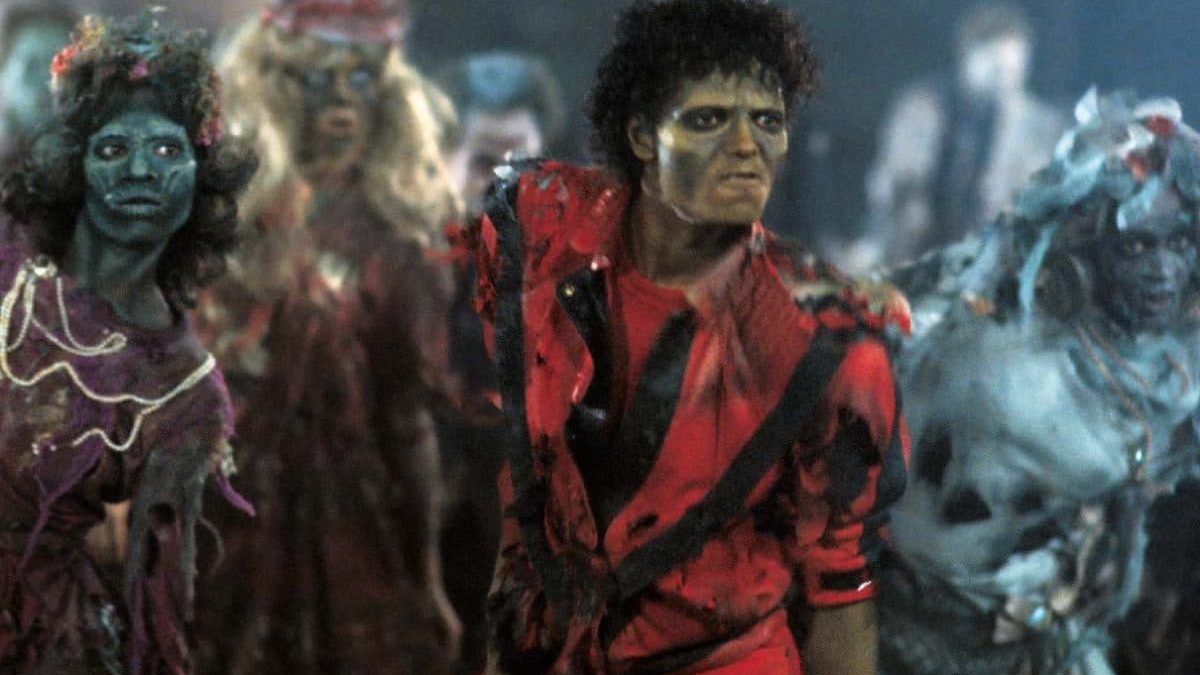 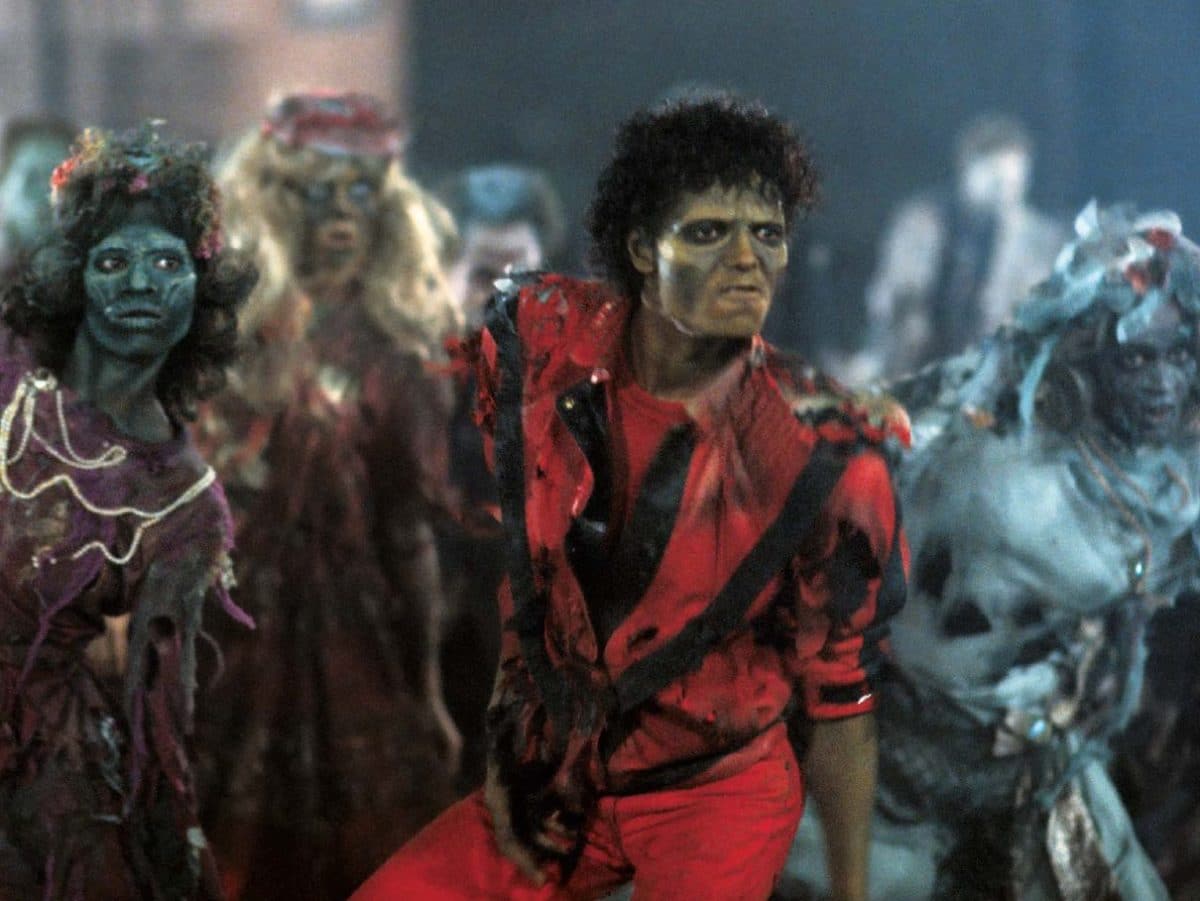 Just beat it! Nope, not that song, but we are going to “beat” the most famous music video ever made!

After Michael Jackson saw John Landis’ horror film, An American Werewolf In London (here’s the beat sheet for that film), the king of pop contacted the writer/director, and they conceived of a short film idea that would be a homage to horror films. To secure the half-million-dollar budget, a behind-the-scenes movie was shot so it could be shown on television (and the VHS tape sold over a million copies—more than any other VHS). Once it aired, Thriller played regularly on MTV and doubled the sales of the Thriller album, helping it become the best-selling album of all time.

Culturally, the Thriller video is credited for transforming music videos into an art form, smashing racial barriers in pop entertainment, and trending the making-of documentary format. Many elements have had a lasting impact on popular culture, such as the zombie dance and Jackson’s red jacket (designed by Landis’s wife, Deborah Nadoolman).

The Library of Congress described Thriller as “the most famous music video of all time.” It has also been named the greatest video of all time by various publications and readers’ polls. In 2009, it became the first music video inducted into the National Film Registry as “culturally, historically or aesthetically” significant. In 2006, Thrill the World began as an annual dance-off every October that people synchronize their watches to and dance simultaneously to Thriller.

This 13:42-minute video best falls under the genre Dude With a Problem where you have an Innocent Hero who must incur a Sudden Event, and their new reality becomes a matter of Life and Death. It’s worth noting that one would think that Thriller would be a Monster in the House since there are, well, monsters in it. But that’s not the case.

A Monster in the House scenario is slightly different than a Dude With a Problem as there’s no Sin, no transgression on the part of the hero or anyone else (hence Innocent Hero). If you can’t place blame on someone, it’s not a Monster in the House. The theme of most Dude With a Problem stories lies in the final element, Life or Death, and that’s what this video is about—don’t get eaten (by the living dead).

Can this hit music video, which is really like a short film, hit all the beats during its running time. Let me thrill you!

How does Thriller hit Blake Snyder’s story beats? Here is the Save the Cat!® beat sheet for the classic music video:

Opening Image: After Michael Jackson’s proclamation of not believing in the occult and the quick title card, we open on a misty country night where a Thunderbird pulls up. It sputters and dies—out of gas. Michael (Michael Jackson) and The Girl (Ola Ray) are stranded. What do they do now?

Set-Up: They stroll under the cloudy night. Michael and The Girl make up. She didn’t believe him that they’d run out of gas (she thought it was a come-on). Now that they understand each other, Michael gives her a ring, and she accepts it. He then tells his date that he’s not like other guys (no kidding). “Of course not,” she says. “That’s why I love you.” We get the feeling from the ominous strains of Elmer Bernstein’s score that something is amiss as…

Catalyst: … In An American Werewolf In London moment, the clouds slide away, revealing a full moon. Michael begins to change into a werewolf (though he looks more like a werecat with the long whiskers and cat eyes, at least to me).

Debate: The girl screams and does the only sensible thing—runs for her life. Wearing his letterman’s jacket, the teen-turned-monster looks a lot like Michael Landon’s 1957 film, I Was A Teenage Werewolf, to which this sequence is an obvious homage.

Theme Stated: The innocent Girl has a serious problem: trying to stay alive, and that’s the theme.

Debate (cont.): The Girl runs but is cornered. And just before the letterman-jacketed beast rips her flesh to shreds we…

Cut to an audience. It’s only a movie! But this, we’ll learn, is a movie-within-a-movie. Michael Jackson (wearing his trademark, red leather Thriller jacket) is happily munching away at his popcorn, but his date, also Ola Ray, is not into the thrills and chills of the horror movie. She wants to leave. Michael wants to stay, but…

Break into Two: They decide to leave the Palace movie theater and go home. That’s when the break happens—and the pulsing beat of the Thriller begins (at 4:13 seconds in).

B Story: Michael teases her, saying she was scared. She says she wasn’t that scared. Can Michael win his date over with his charms?

Fun and Games: As they’re walking down a foggy and shadowy back street, Michael sings and dances (the promise of the premise).

“It’s close to midnight and something evil’s lurkin’ in the dark.
Under the moonlight, you see a sight that almost stops your heart. You try to scream, but terror takes the sound before you make it. You start to freeze, as horror looks you right between the eyes,
You’re paralyzed.”

“You hear the door slam and realize there’s nowhere left to run. You feel the cold hand and wonder if you’ll ever see the sun. You close your eyes and hope that this is just imagination, girl.
But all the while, you hear a creature creepin’ up behind; you’re outta time.”

“They’re out to get you; there’s demons closing in on every side. They will possess you unless you change that number on your dial. Now is the time for you and I to cuddle close together. All through the night, I’ll save you from the terror on the screen; I’ll make you see.”

Midpoint: With his charms, Michael has won his date over, crossing A and B Stories. They’re almost safely home! They stroll, arm in arm, past a creepy cemetery, and Vincent Price’s narration starts…

“Darkness falls across the land,
The midnight hour is close at hand.
Creatures crawl in search of blood,
To terrorize y’all’s neighborhood.
And whomsoever shall be found,
Without the soul for getting down.
Must stand and face the hounds of hell,
And rot inside a corpses shell.”

The living dead clamber out of their graves, moldering and rotten, and looking for human flesh. This raises the stakes and starts the ticking clock as it’s only a matter of time before the dead find Michael and The Girl.

“The foulest stench is in the air,
The funk of forty thousand years.
And grisly ghouls from every tomb,
Are closing in to seal your doom,
And though you fight to stay alive,
Your body starts to shiver.
For no mere mortal can resist,
The evil of the thriller.”

Bad Guys Close In: The living dead descend onto the hapless couple. They’re surrounded. What do they do now? Then Michael suddenly turns into a ghoul. Was he bitten? Was he one the whole time? It doesn’t matter. He does the “thriller dance” with the other living dead. This is where the “Thriller Dance” begins, which, of course, everyone knows without even having seen the video.

All Is Lost: The Girl is all alone. No help. Even her date has turned on her. The whiff of death!

Dark Night of the Soul: Why hast thou forsaken me? This is the part of the story where our hero typically loses all hope. This is where the hero “drops their mask,” and has clarity of who he/she is, and the reality of the situation. And the situation is… her date Michael has turned on her, just like in the movie they saw back at the Palace theater, life imitating art. The Girl’s only hope now is to run for it—she’ll have to save herself; that’s her moment of clarity.

Break into Three: The Girl runs home and locks the door. She hopes to save her skin. Now she must depend only on herself and not Michael to survive, A and B stories crossing. Safe at last?

Finale: As The Girl is Defending the Castle, the living dead break in. She’s trapped. Then, High Tower Surprise, it was all just a dream. Michael comforts her, which reprises the theme of safety one last time in a Dig, Deep Down moment. He says he’ll take her home. Safe in his loving arms. Happiness at last?

Final Image: As the two are heading out the door, Michael turns around and displays his fiendish yellow feline eyes (a call-back from the first images of the video). Was it a dream within a dream? A movie within a movie? Apparently not—Thriller is real, and there’s no escape. And the audio ends with Vincent Price’s diabolical cackle to “seal her doom”: “Aahahahahahaaha.”

The Save the Cat!® NaNo Prep Webcast with Jessica Brody