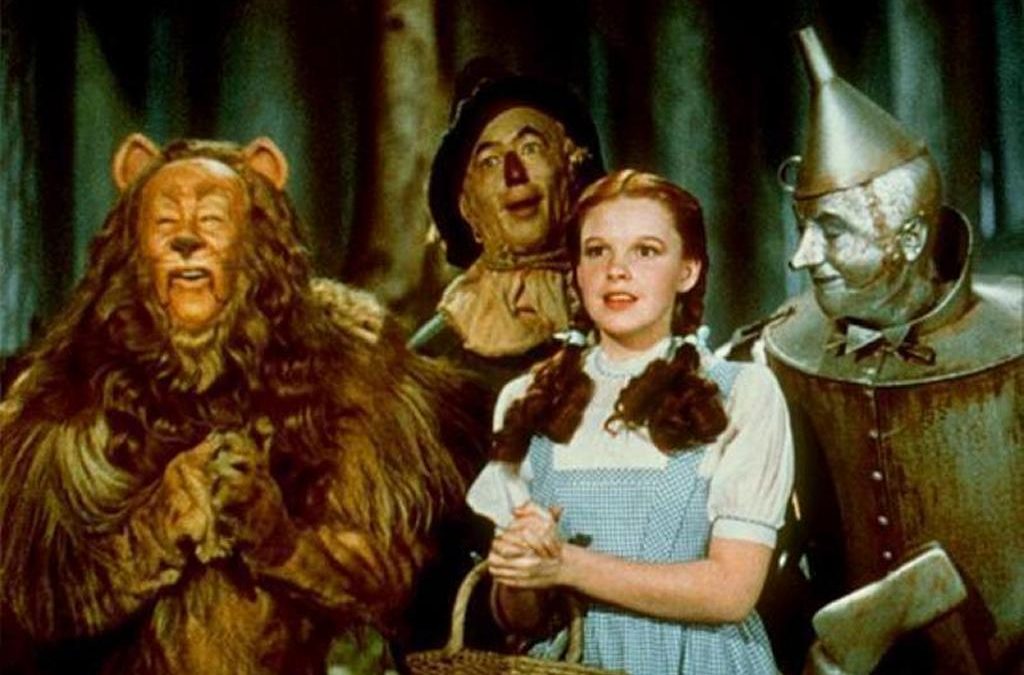 It’s Fun and Games as the team comes together. 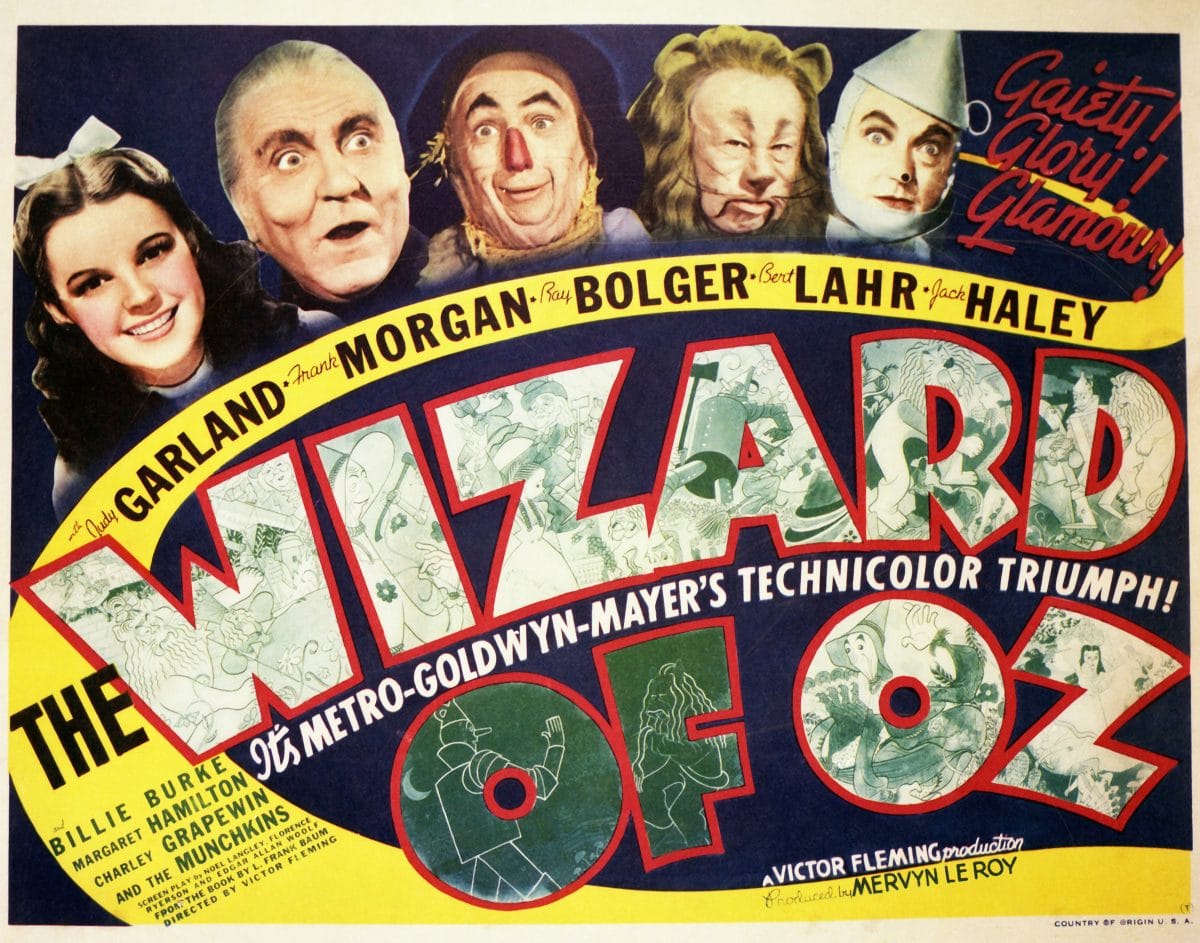 Opening Image: Dorothy Gale (Judy Garland) and her dog Toto hurry down a rural Kansas road, running away from a problem.

Set-Up: Dorothy tells her aunt and uncle that the neighbor, Miss Gulch (Margaret Hamilton), hit Toto with a rake for trespassing in her garden. Dorothy’s adoptive guardians have no time for her, however, as they prepare their farm for an oncoming storm. The three farmhands, foreshadowing their roles in the later part of the story, also fail to offer any real help. Dorothy’s A Story problem of protecting Toto, combined with the lack of support from those around her, show the six things that need fixing in her life. Auntie Em tells Dorothy that they only want her to find a place where there is no trouble.

Theme Stated: Speculating on such a place, one that must be far away, she sings:

The song reveals the thematic premise: is there another place, one in which Dorothy will feel at home? Is it possible that there is somewhere she will feel safe? Technicolor aside, is the grass really “greener on the other side?” This is what Dorothy will need to learn on her journey.

Set-Up (Continued): Miss Gulch arrives with an order to take Toto and have him destroyed for biting her. When Toto escapes her clutches and returns home, Dorothy decides the two should run away. In her thesis world, staying at the farm means Stasis = Death, both literally for Toto and symbolically for Dorothy. On her way, she meets Professor Marvel (Frank Morgan), who portends to tell fortunes. Consulting his crystal, he convinces Dorothy to return home to her aunt and uncle; she can’t always run from her problems, and must eventually confront them.

Catalyst: Arriving back at the farm, Dorothy is caught in the middle of a storm while searching for her family and the farmhands. As a tornado rages, she is struck in the head and knocked unconscious.

Debate: The house crashes to the ground, and Dorothy opens the door to reveal a world totally unlike hers, an upside-down version of all she knows, vibrant and exciting. She tells Toto, “I have a feeling we’re not in Kansas anymore.” But where are they? Dorothy believes they’ve made it “over the rainbow,” where she will find happiness. She is greeted by Glinda (Billie Burke), a good witch who declares Dorothy a heroine to the citizens of Munchkinland; her house has killed the Wicked Witch of the East.

The Wicked Witch of the West arrives, accusing Dorothy of murder, and Glinda gives Dorothy the Witch’s magical ruby slippers. She is told to get out of Oz; it is not the safe place she had assumed. The only person who might be able to help her return to Kansas is the Wizard in Emerald City.

Break into Two: Dorothy, guided by the Munchkins, begins her journey down the yellow brick road (a literal road in this Golden Fleece) and enters her antithesis world, one that is not as safe as her home was.

B Story: The B Story characters will be those Dorothy meets along the way, reflections of family and friends that help her understand the theme and learn that she has a home where she is loved.

Fun and Games: As Dorothy travels down the road, she begins to assemble her team. First, she meets the Scarecrow (Ray Bolger) who is unable to scare anything, believing this is because he has no brains. Dorothy invites him to meet the Wizard with her. Farther along, they meet the Tin Man (Jack Haley), who desires a heart to display emotion and feel like a person.

After the Wicked Witch arrives to challenge them, they encounter the Cowardly Lion (Burt Lahr). The four continue toward the Emerald City, confident that they will find what they want… but will it be what they need? Meanwhile, the Wicked Witch casts a spell on a field of poppies to lull them to sleep.

Midpoint: With the Emerald City in sight, the team runs through the poppy field, but Dorothy begins to succumb to the spell. When Glinda causes snow to fall on the field, the spell begins to break, and Dorothy rises to complete the journey. It’s a false victory as they arrive at the gates, accompanied by a hope-infused song:

After the guard sees Dorothy’s slippers, he grants them admittance, and they are primped and cleaned up to meet the Wizard, a public coming out and a party at the Midpoint.

Bad Guys Close In: The celebration doesn’t last long, as the Wicked Witch flies over the city and writes an ominous warning to Dorothy in the sky. Panic sweeps through the city, and Dorothy and the team approach the Wizard to speak with him, their internal Bad Guys of self-doubt hindering them. The Wizard is terrifying to behold, his visage accompanied by a booming voice and bursting flames. After berating each member of the team, he throws a road apple at them: complete the impossible task of bringing back the Witch’s broomstick — only then will he help them.

The stakes are raised and timeclocks begin ticking as Dorothy’s ability to return to Kansas becomes more unlikely. Passing through the haunted forest, the team is attacked by the Witch’s flying monkeys, and Dorothy and Toto are brought before the Wicked Witch. Reflecting the predicament Dorothy was in at the start of the story, she must save Toto from destruction, this time by giving the Witch the ruby slippers. She agrees, but a spell makes it impossible to remove them as long as Dorothy is alive. Toto escapes, but the Wicked Witch plans to kill Dorothy as soon as the sand in the hourglass has fallen.

All Is Lost: Dorothy despairs; the whiff of death is imminent for her and her friends. Relying on her primal instincts, she calls out to her aunt, “I’m frightened, Auntie Em!” She is worse off than if she had never run away from home in search of something better.

Dark Night of the Soul: During her lament, Dorothy sees a vision of her Auntie Em in the Witch’s crystal ball and says that she’s trying to get home. She now knows that home is Kansas, and that is where she belongs, not in a faraway land “over the rainbow.” Meanwhile, the Scarecrow, Tin Man, and Cowardly Lion hatch a plan to save Dorothy.

Break into Three: While Dorothy awaits rescue, the three friends plan to Storm the Castle.

Finale: In their synthesis world, the team demonstrates their transformation. Dorothy wants to go home, while the rest of the team gathers and reveal that they already possess what they desire: the Scarecrow strategizes, the Tim Man shows emotion, and the Cowardly Lion is willing to lead and execute the plan of dressing like guards to sneak in. When the Witch stops them and tries to kill the Scarecrow with fire, Dorothy douses him, splashing and killing her in the process.

They now have the broomstick and return to the Wizard. In a high tower surprise, the Wizard is exposed to be a charlatan. He gives each individual a prize to symbolize that they already had what they wanted — what they needed was to recognize it. However, his plan to help Dorothy return to Kansas fails and leaves her stranded in Oz. Glinda appears, telling Dorothy she always had the power to return; she only needed to learn it for herself. Dorothy digs, deep down and executes the new plan, clicking her heels together.

Final Image: Dorothy wakes, surrounded by her loved ones, promising she will never leave those who love her. Her journey has ended where it has started, and her prize is the realization that “there’s no place like home.”

Save the Cat!® Goes to the Conferences