Save the Cat!® Goes to the Conferences 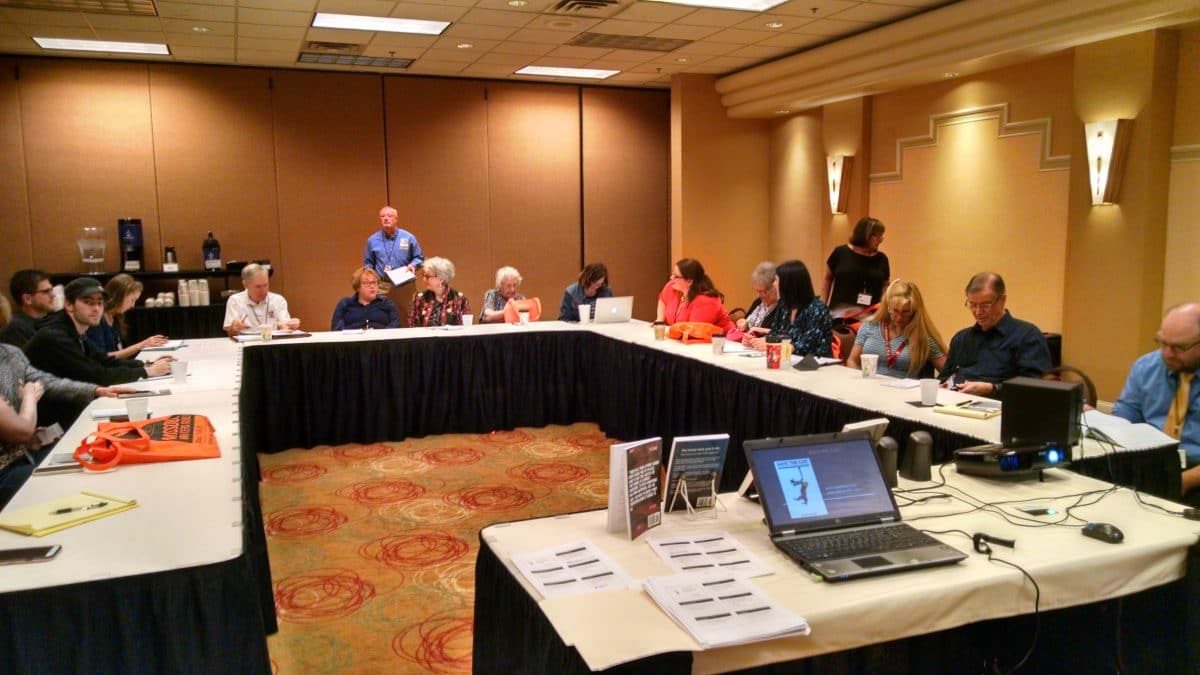 “Your talk on Save the Cat! is why I’m attending this year!”

I was preparing to present at the Missouri Writer’s Guild annual conference when a writer friend came up to me and told me this. It surprised me, because she was a member of the same local writing group I was a part of. I assumed she had heard me give a similar presentation a few years ago, but she told me that she had joined the group at a later date.

“I always hear so much about how great Save the Cat! is,” she continued. “At the critique groups or whenever people get together to talk about writing, they mention the book as a great guide for their writing. So I knew that if you were presenting on it again, I had to attend the conference!”

I was honored; after all, I didn’t invent the tools and techniques in the books. I, like many others, found them to be beneficial as a writer, and I wanted to spread the word. I began by teaching small groups of writers, imparting the basics of the Blake Snyder Beat Sheet or the 10 Genres. Of course, it was nothing like the in-depth weekend workshops offered in Los Angeles or New York, but it was enough to grab their interest and watch the fire spread. Soon, I was being contacted by others, asking if I would present to larger venues and groups.

A Common Language for All Writers
Writers at these conferences revealed that they were amazed at how helpful a book on screenwriting could be for them, whether they were writing a short story or a novel. That’s because Blake’s work gives writers a common language for discussing story structure.

While the books were written with screenplays in mind, it’s Blake’s down-to-earth, simple approach that makes the content accessible to writers of all walks of life. Yet within that simplicity exist deep elements as well, making it useful for writers of various experience levels.

That’s one of the biggest realizations I’ve taken away from the conferences I’ve presented at: writers walk away feeling empowered. Some are only in the idea stages and have never written a full novel or screenplay, while others are seasoned and looking for tools to hone their craft with. Either way, they leave excited about the possibilities that lie ahead.

At the most recent conference, I was approached by several attendees throughout the weekend who wanted to tell me how the content was helping them. Those who were stuck with “writer’s block” declared that they now knew what they needed to do, that they knew what their story was missing. Others told me that understanding the link between the Opening Image and the Final Image helped them solve the problem of finding the right ending to their story.

Shortly after my presentation ended, the conference chair approached me to tell me that there was already “a lot of buzz happening” about the Save the Cat!® presentation. In fact, it led to an invitation to present at the University of Missouri for Mizzou’s annual ShowMe Writers Masterclass in October.

Of course, I always mention to the audiences that what I am giving them is merely a sampling of what is available for them to learn from Blake Snyder’s teachings. It’s enough to whet their interests, but for those who want to learn more, there are books to read and workshops to attend. Now, there’s another fantastic option with STC!U‘s online beat sheet workshops.

Taking the Cat! to School
The tools and techniques Blake Snyder created aren’t just beneficial to those who want to write for a living, which is why I also branched out and began presenting at educational conferences. As any educator can tell you, getting a reluctant reader to engage with a story can be like herding cats (no pun intended) — asking them to write can be just as daunting.

But when students are taught a common language, one that they can relate to by studying their favorite films, suddenly they aren’t so resistant anymore. Stories become exciting; writing becomes something they can do. Students begin to realize that they are able to understand what’s happening in a narrative, even at a deeper level than they thought possible. As their comprehension rises, so does their confidence in their abilities.

Before Blake passed away, he desired to take his approach and empower educators and students alike with Save the Cat!® My presentations at conferences have only confirmed the need to bring the Cat! to the classroom, which is why we have begun developing a book to adapt the content to a classroom setting.

The Power to Transform
I love receiving the positive feedback at conferences. But one such encounter will always stick with me. After a presentation to a group of educators, one that introduced the basics of Blake’s story beats and how they can impact student learning, a woman quietly approached me.

“I just want to thank you,” she said. “I am here because I work at a juvenile justice facility. The boys there don’t care about reading and writing. They don’t see the need for it, and we can’t figure out how to get them to learn.” She smiled. “This is what they need. They can relate to what you talked about, and I know they will get excited about it. I think it can make a real difference for them.”

That was the best feedback I could have ever received. It proves that not only did Blake Snyder leave us with some amazing teachings, but that they will make a difference in the lives of others. And who knows what stories those individuals will give us? I’m sure that if Blake could have been there with me, talking to her, he would share in her excitement.