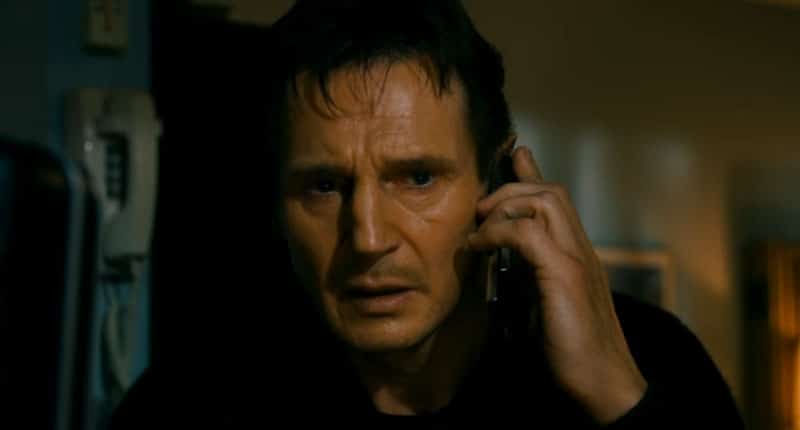 Whether a Superhero or a Dude with a Problem, this dad has a way with phones.

Genre: Bearing qualities of each, Taken splits the difference between two genres: Dude with a Problem and Superhero. As you read through the beats below, see if you find the same genre identifiers I did, and let me know in the comments!

How does Taken hit Blake Snyder’s story beats? Here is the Save the Cat!® beat sheet for the classic film:

The protagonist is “dragged into a mess without asking for it” (DWAP) – although how “innocent” he is may be up for debate. He is also a hero with a “special power” (SH) – his “particular set of skills.” It’s a sudden event that thrusts him into a world of hurt, and what’s at stake is the life of an important individual (his daughter) and a group (innocent young women) – making a case for DWAP.

But the movie’s protagonist is “opposed by a nemesis of equal or greater force” and in this case, that nemesis is a dark mirror image of the hero, which is common in Superhero genre movies. The “curse” that the protagonist “succumbs to as the price for who he is” is the element that matches up least, although there’s perhaps an argument that the protagonist of Taken accepts the curse of being the kind of guy who uses a “particular set of skills” and he’ll never be able to shake that part of himself.

So you tell me… Dude with a Problem or Superhero?

Opening Image (1): The movie opens on old home movie type footage – a little girl’s fifth birthday. A man wakes, he’d been dreaming of her. This is our hero, Bryan Mills (Liam Neeson). The girl is his daughter and, we will come to see, the most important focus of his life right now.

Theme Stated (5): An old friend of Bryan’s says to him, “She appreciate the fact you’ve given up your life to be closer to her?”

Bryan had a career as some kind of spy. He was gone too much, doing this job. His family felt abandoned and left him. Now he’s retired and his greatest desire is to have a relationship with his daughter – but is it too late?

For years he had tried to protect his daughter from that other side of his life – the danger of his work – by keeping them completely separate. But this story will require him to let the two worlds merge.

Set-Up (1-10): Bryan agonizes over the choice of a birthday gift for daughter Kim (Maggie Grace). It’s clear he wants to please her, to be in her favor.

At her birthday party, we fill in some details: Bryan’s divorced from Kim’s mom, Lenore (Famke Janssen). Lenore is remarried to a rich guy who gives Kim a horse for her birthday, and obviously provides a life for them that Bryan can’t compete with. Bryan doesn’t seem to have a place in his daughter’s life.

At home, Bryan’s old spy buddies arrive for a BBQ. They do private security work on the side, and offer him a quick gig to make some money. They’re surprised when he agrees – he’d really been trying to distance himself from that life altogether.

The job is protecting a pop star, and Kim has dreams of becoming a singer, so getting an “in” with this woman might be a way for Bryan to bond with his daughter.

In a post-show melee, Bryan ends up protecting the singer from an attacker and we see some of his skills in action. It’s enough to let us know he’s very good at what he does.

Catalyst (12): Bryan meets Kim for lunch, excited to spend time with her, only to be ambushed by Kim and Lenore. They want him to sign papers allowing Kim (a minor) to leave the country and travel to Paris with a girlfriend.

Debate (12-25): Bryan’s not comfortable with it and at first he refuses. It pains him to make his daughter unhappy, but his instincts are screaming. He suggests he go with them to chaperone – that’s a “no.”

Bryan finally signs the permission slip, but with certain conditions which allow him to maintain some sense of oversight, of control. Kim’s thrilled.

While dropping her at the airport Bryan learns Kim’s real plan is to travel around Europe, following a band. Bryan confronts Lenore, who admits she knew. Lenore tells Bryan he can’t smother Kim or he’ll lose her for sure. So he goes along because he wants to keep his footing in Kim’s life.

Kim and friend Amanda (Katie Cassidy) arrive in Paris and share a cab with a cute boy. We learn Kim is a virgin, which helps to cement the stakes.

Meanwhile, Bryan sits at home, waiting for Kim’s call. There’s nothing he can do but wait. Kim finally calls and while they’re on the phone —

Break into Two (25): Kim’s kidnapped! Bryan goes into action immediately – he’s coming to save her.

B Story (30): Bryan’s old spy life forms the basis of the B Story. He’d always managed to keep it separate from his family life, but now the two will intersect. It’s among the spy-action violence that we’ll also discuss thematic ideas: the choices parents make for their families, and the question Bryan lives with as he wonders (as maybe we all do) whether the choices he made were the right ones.

Fun and Games (30-55): Bryan leaps into action, showing us his very particular set of skills. He talks Kim through her own kidnapping, already gathering information he’ll need later. One of the kidnappers gets on the line and tells Bryan, “Good luck.”

Bryan calls in help from an old spy buddy – and learns the kidnappers are Albanians who traffic women, and he has 96 hours to save Kim. A ticking clock.

Bryan goes to Paris, where he investigates the crime scene. He gathers clues and tracks down the cute boy airport spotter who targeted the girls. The boy meets an early demise.

Bryan gets a lead on the Albanians through Jean-Claude (Olivier Rabourdin), an old contact who now works at the French Consulate. Bryan plants a bug on an Albanian pimp, and is led to a construction site where girls are being held in a makeshift brothel.

Midpoint (55): Bryan finds Kim’s jacket! But she’s not wearing it – it’s some other poor girl, whose condition reminds us what’s at stake, what Kim’s probably going through right now.

There’s a big action set piece as Bryan fights his way out of the brothel, then the construction site, taking the girl with him. This is the first time we see guns used in the movie. That’s a small thing, but it creates an escalation in the violence and danger.

Bad Guys Close In (55-75): Bryan notices he’s being followed, but shakes the tail. He takes the rescued girl to a stash-house he knows from his spy days. Bryan gives the girl an I.V. While he waits, Bryan gets a call from Jean-Claude, who wants to meet.

We see Bryan watching Jean-Claude from a distance – he doesn’t trust anyone. Jean-Claude tells Bryan to leave Paris or he’ll have to arrest him. From his vantage point, Bryan can see more men already arriving to apprehend him. Whether Jean-Claude is just doing his job or there’s something more sinister we don’t yet know.

Back at the stash house, the girl wakes and gives Bryan a lead on the traffickers’ location.

There, Bryan finds Marko (Arben Bajraktaraj) – the voice on the phone – Kim’s kidnapper. Bryan fights his way through the squad of Marko’s men. He finds more girls being held here. No Kim, but he finds Amanda – only, she’s already dead. This gives us a whiff of death to remind us what’s at stake, and to reinforce the urgency of the ticking clock.

All Is Lost (75): Giving us a new glimpse of what Bryan’s past life must have entailed, we see Bryan torture Marko with no mercy to get info on Kim’s whereabouts. He learns she has been sold to yet another bad guy; just when he thought he was closing in, Bryan realizes he’s still very far from saving Kim.

Break into Three (85): Bryan infiltrates Patrice’s party and finds Kim being auctioned off. Bryan forces a buyer to bid on her but before Bryan can get her to safety, he’s knocked unconscious.

Finale (85-110): When Bryan comes to, he fights his way through a gang of Patrice’s men. Patrice tells him, “Please understand, it was all business. It wasn’t personal.” And Bryan’s response? “It was all personal to me.” – echoing again the question of work and family, and the choices we make in service to them.

Bryan races to the boat where Kim is being delivered to her buyer. He fights his way onto the boat and finds Kim being held at knifepoint. With his sharpshooter skills, Bryan kills the guy who’s holding her. As Kim collapses into Bryan’s arms, saying “You came for me,” we know there’s no one in the world she’d rather see right now.

Final Image (110): Back in L.A., Kim reunites with Lenore and stepdad. They’re thankful, and ready to make room for him.

Some time later, Bryan takes Kim to meet the pop star he protected in the beginning. We can see Bryan is now a real part of Kim’s life.