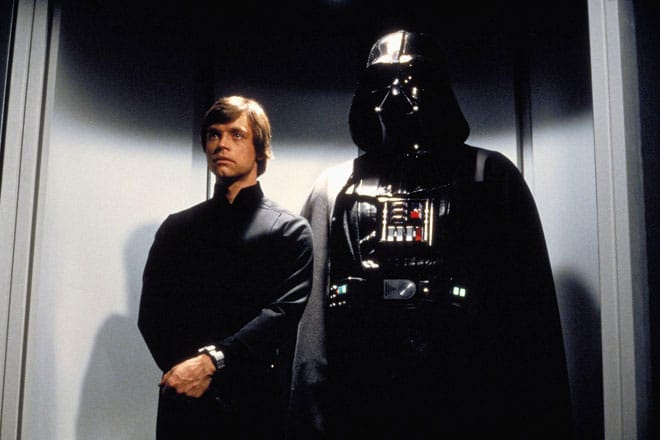 Luke accompanies Vader, but will he give in to his inner bad guys and join the Dark Side? 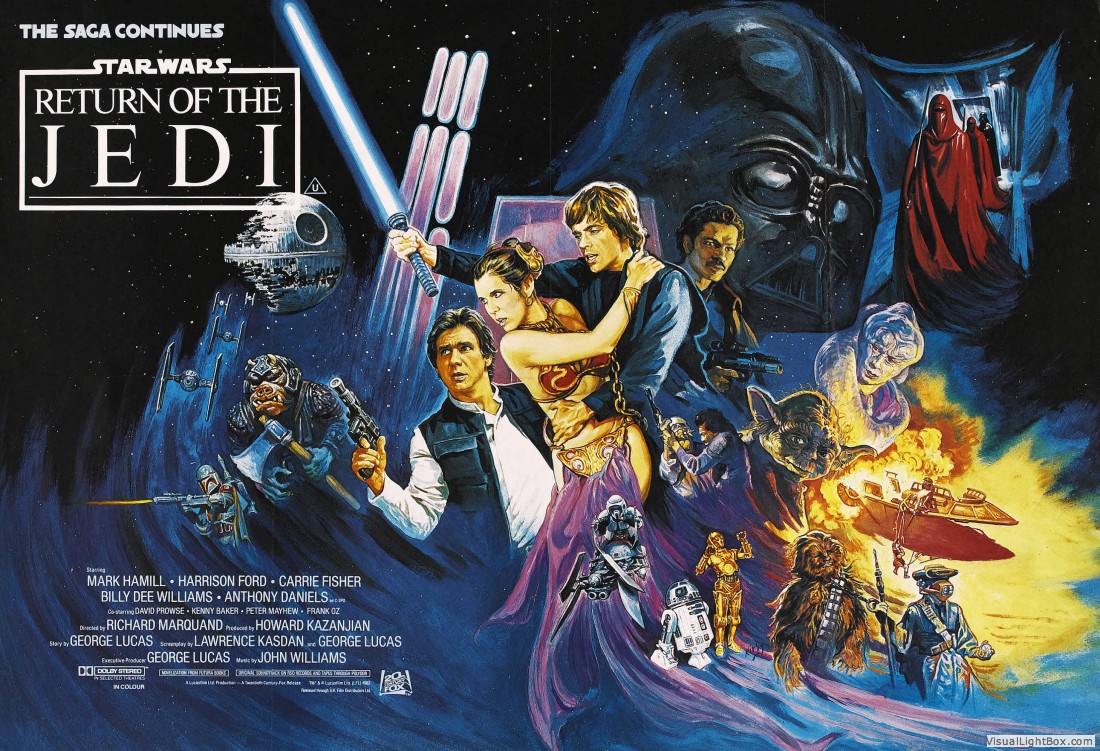 Opening Image: After the iconic “A long time ago…” screen and crawling opening, the camera pans down to an Imperial Destroyer as it heads toward the second Death Star, which is being constructed.

Set-Up: Darth Vader’s shuttle arrives at the space station, and he wants it to be built faster because the Emperor is coming.

Back on Tatooine, R2-D2 and C-3PO bring a message to Jabba the Hutt in the form of a hologram of Luke Skywalker, who seeks to bargain for Han Solo, who is still trapped in carbonite. Jabba takes the two droids and feeds a slave woman to the rancor below. A bounty hunter arrives with Chewbacca, selling him to Jabba while Lando Calrissian enters the lair in disguise. As night falls, the bounty hunter visits Solo and frees him. As she reveals her identity to be that of Princess Leia, Jabba catches the two of them and imprisons them. Han is reunited with Chewbacca, who tells him that this is all part of Luke’s plan.

Theme Stated: Chewbacca tells Han that Luke is a Jedi, to which Han laughingly replies that it is a delusion of grandeur. But it is the theme of identity and choice that will guide Luke’s journey and the fate of the galaxy. Will he choose to be a Jedi, or will he fall prey to the Dark Side and become like his father?

Catalyst: A robed figure enters Jabba’s lair, revealing himself to be Luke Skywalker.

Debate: Luke gives Jabba an ultimatum: he can either profit from the exchange or be destroyed. Jabba is not swayed by Luke’s Jedi “mind tricks” and drops him into the rancor pit below. While Luke survives and kills the rancor, Jabba captures him and orders that Luke and his friends be terminated immediately. They are taken to the Dune Sea to be sacrificed to the Sarlacc. Luke says he has taken care of everything, but has he? Just as Luke walks the plank, he enacts his plan. In an action-packed sequence, Boba Fett is eaten, Jabba is killed, and the team escapes. In Luke’s thesis world, he is powerful and confident, but that will soon be tested.

Break into Two: After the battle, the team splits up. Luke and R2-D2 return to the Dagobah System while Han and the others depart to team up with the Rebels in the Alliance. Meanwhile, Vader welcomes the Emperor aboard the new Death Star.

B Story: Vader wants to seek out Luke, but the Emperor says that Luke will come to him, and then Luke can be turned to the Dark Side. The relationship between father and son will guide Luke on his journey as he chooses who he will become. Will he become a Jedi, or is he destined to make the mistakes of his father? It is through this relationship that he will learn the theme as he passes through the Transformation Machine.

Fun & Games: Luke arrives on Dagobah, only to find that Yoda is dying. Yoda tells Luke that before becoming a Jedi, he must confront Vader and confirms that the two are father and son. Yoda believes that Luke rushed into his earlier confrontation, cautioning Luke against starting down the path of the Dark Side through anger, fear, and aggression. He reveals that once he dies, Luke will be the last Jedi. Yoda also tells him that there is another Skywalker. Although Luke doesn’t believe he can accomplish the task ahead of him, Obi-Wan appears to him and counsels him, teaching Luke about his twin sister, Leia. In the antithesis world of this Superhero story, being the last Jedi in the galaxy gives Luke his special power, but it is also a curse, as it makes him a target of his nemesis Vader to attempt to sway him to the Dark Side.

Han and the Rebels make plans to take down the energy shield of the Death Star, the controls of which are located on the forest moon of Endor. They will use a stolen Imperial shuttle disguised as a cargo ship to gain them safe passage. As the team, now joined by Luke, approaches for clearance, Luke senses Vader and realizes that his presence has put the mission in jeopardy. Upon landing, the team encounters Storm Troopers and a chase ensues on speeder bikes, with Leia being shot down and thrown off hers. An Ewok finds Leia while Luke and the others search for her.

Meanwhile, Vader tells the Emperor of Luke’s presence on Endor, and the Emperor orders Vader to go to the sanctuary moon and wait for him. He has seen Luke’s compassion for Vader, which will be his undoing.

Ewoks capture Luke and the team, taking them back to their home in the trees. Upon finding Leia there, Luke uses the Force and the Ewoks’ belief that C-3PO is a god to trick them into freeing him and his friends.

Midpoint: The Ewoks offer to take them to the shield generator, a false victory. A and B Stories cross as Luke tells Leia of their father, revealing that there is good in Vader, and that he has felt it. He can sense Vader’s presence on the moon, and a time clock appears as Luke declares that he must face Vader.

Bad Guys Close In: Vader lands as Luke surrenders to the Empire. Luke tells Vader that he has accepted the truth of their relationship, but only in that his father is good, and that is why Vader couldn’t destroy Luke in their previous encounter. Vader disagrees, declaring that he must obey his master. Luke confronts his inner bad guys and states that he will not turn to the Dark Side. He can even feel Vader’s inner struggle, urging him to let go of his hate. When Vader declares it too late and admonishes Luke to listen to the Emperor, Luke believes his father might truly be dead. Vader’s own inner bad guys cause him to ponder this as he leaves with Luke.

The Emperor attempts to lure Luke to the Dark Side, telling Luke that he had set a trap for the Rebels. He urges Luke to let his hate fill him and use it to strike the Emperor down and fulfil his destiny.

All Is Lost: As Luke watches from space, the Emperor declares that the Rebel fleet is lost and that Luke’s friends will not survive. The whiff of death looms near as Luke learns that the Alliance will all die, as will his friends.

Dark Night of the Soul: As Luke struggles with what to do, the Emperor can feel Luke’s anger. Luke begins to feed into his inner bad guys and the darkness.

Break into Three: Luke brandishes his light saber and confronts Vader, while on Endor, the tide of battle turns in favor of the Rebels.

Finale: Luke tells Vader that he feels the good in him, refusing to believe that Vader will kill his own son. The Emperor watches as Luke declares his refusal to fight Vader. During the confrontation, Luke’s thoughts turn to Leia, leading Vader to know the truth: that he has not one, but two children. Vader suggests that if Luke does not give in to the Dark Side, perhaps he can corrupt Leia into turning. Enraged, Luke fights and overpowers Vader, cutting off his hand. In a moment of digging deep down, Luke looks at his own hand that Vader had previously cut off and sees a reflection of himself in his father, realizing what he could become in his moment of hatred. Luke reaffirms his refusal to turn to the Dark Side, stating, “I am a Jedi, like my father before me.” This is his synthesis world, in which he makes his ultimate choice and establishes his identity.

As the Rebels destroy the shield generator on Endor below, the Emperor uses his powers to electrocute Luke. Vader watches in conflict as Luke calls out to him, son to father, and in his own moment of digging deep down, Vader grabs the Emperor and tosses him into the shaft below. In his final moments, Vader asks his son to take off his helmet, wishing to look on Luke with his own eyes. Luke refuses to leave, wishing to save his father. “You already have,” Vader tells him in his final moments.

Luke escapes with his father’s body moments before the Rebels destroy the Death Star, and he returns to Endor. A celebration ensues at night as Vader’s body is burned on a funeral pyre while Yoda, Obi-Wan, and Anakin Skywalker look on.

Final Image: The heroes stand together, good having triumphed over evil. Luke has resisted the Dark Side, avoiding the path of his father, and balance has been brought to the Force.