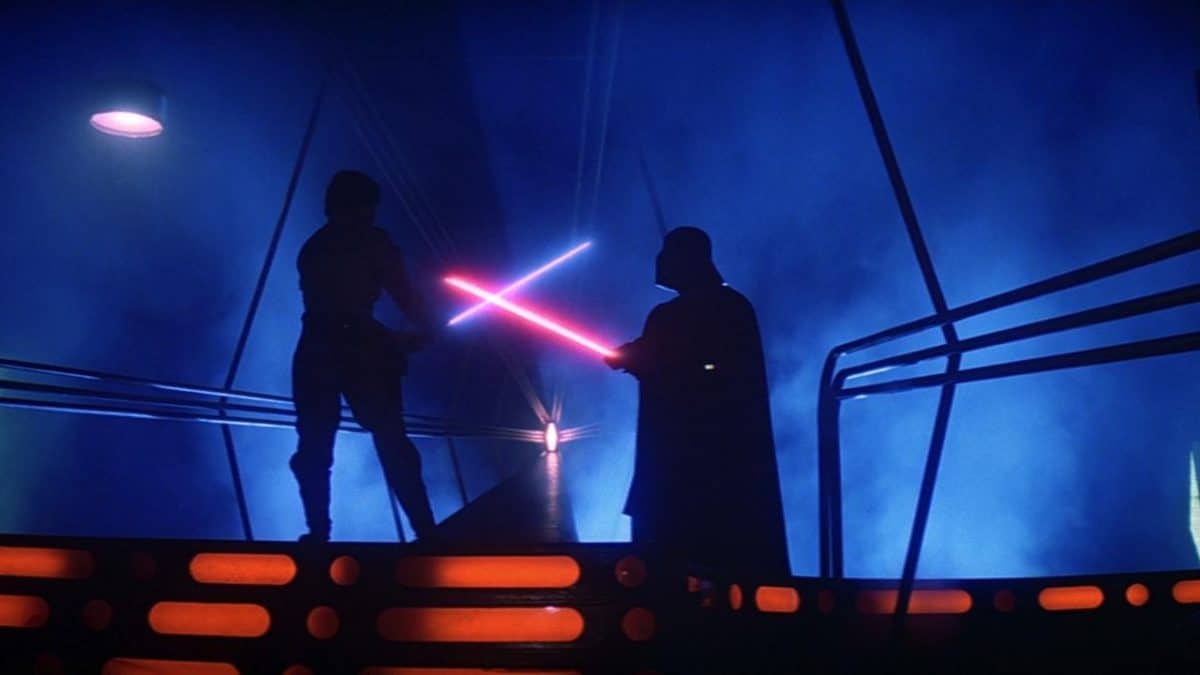 A final showdown in which Luke must trust the Force over his fears. 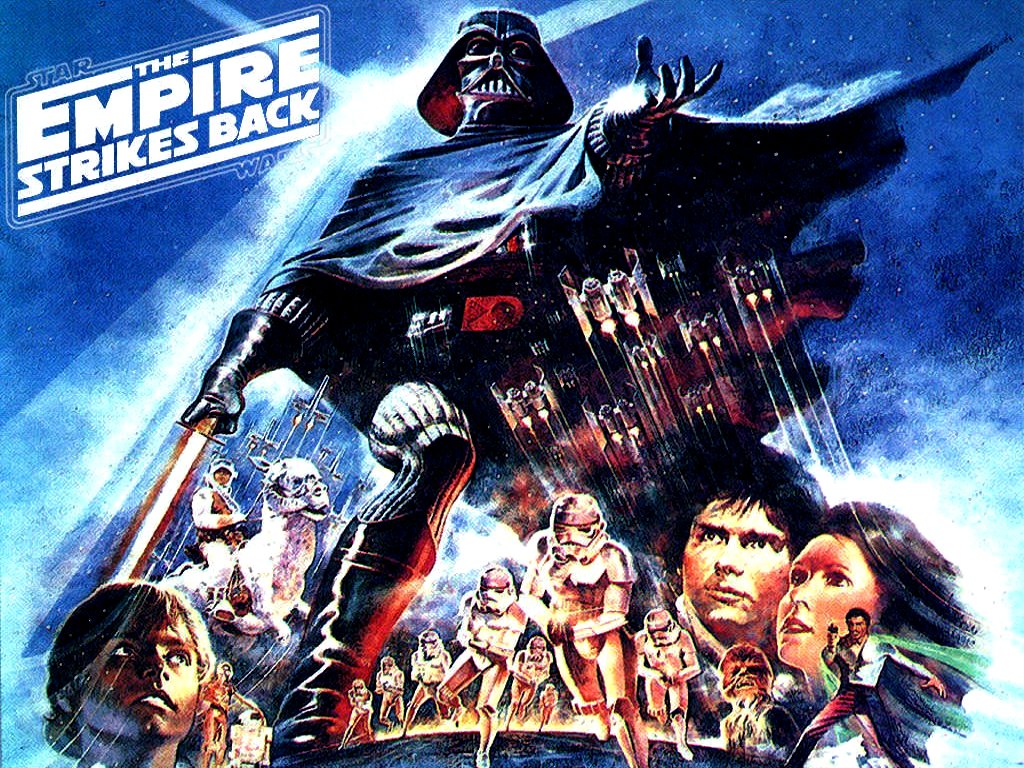 Opening Image: After the iconic “A long time ago…” screen and crawling opening, the camera pans down to an Imperial ship that is sending out probes, one of them landing on the ice planet Hoth.

Set-Up: Luke Skywalker (Mark Hamill), riding on a Tauntaun, sees the probe land. Wanting to investigate, he calls the Rebel base and reaches Han Solo (Harrison Ford) right before being attacked by a Wampa. Back at the base, Han tries to leave because there is a bounty on his head, but not before trying to get Princess Leia (Carrie Fisher) to admit her feelings for him. After learning that Luke hasn’t returned, Han takes a Tauntaun out into the encroaching darkness to find him. Meanwhile, Luke frees himself in the Wampa cave, using the Force to grab his lightsaber. In Luke’s thesis world, he is only beginning to learn the true power of the Force.

Theme Stated: Just as in the Wampa cave, Luke will need to face his fears by allying himself with the Force if he is to confront Darth Vader and avoid turning to the Dark Side himself. The Force comes from within, and so Luke must learn that the strength to do what is right and to overcome evil will come from himself.

Set-Up (Continued): Luke wanders in a blizzard, succumbing to the cold. The commanders at the base realize that Luke and Han are the only two patrols not accounted for, but must close the shield doors for protection.

Catalyst: Before passing out, Luke sees a vision of Obi-Wan Kenobi (Alec Guinness), who tells Luke to visit the Dagobah system to learn the ways of the Jedi from Yoda. It is through this journey that Luke will learn to truly ally himself with the Force. But on this road, he will need aid from his team if he is to achieve the prize, the defeat of the Galactic Empire.

Debate: Han finds Luke, keeping him warm with the deceased Tauntaun. The next morning, a search party finds them and takes them back to base. While Luke prepares to meet Yoda, Han and Leia banter back and forth, with Leia kissing Luke to make Han jealous. A probe lands outside, giving off a signal that is not used by the Alliance. Chewbacca and Han investigate, taking it out, but alert the Empire in the process.

In space, Darth Vader (David Prowse, voice: James Earl Jones) learns that the probe has found life readings in the Hoth system. Even though others doubt it, Vader is certain and orders an attack. A fleet of star destroyers comes out of hyperspace as the Rebels try to escape.

Break into Two: Imperial Walkers, known as AT-ATs, approach the base. The battle has begun.

Fun & Games: The Imperial troops approach and try to shut down the shield generators while Leia evacuates the remaining ground staff. Luke and the others fight the AT-ATs as the ground troops fight. Han tries to evacuate Leia, but an explosion blocks them from her transport. Han takes her and C-3PO (Anthony Daniels) to the Millennium Falcon as Darth Vader enters the base. Luke and R2-D2 set a new course for the Dagobah system.

B Story: Han and Leia’s budding romance forms one subplot, but the main B Story is Luke’s growing relationship with the Force. His connection to it will guide his actions and will determine his destiny.

Luke lands on Dagobah, crashing his X-Wing into a swamp. Yoda (voice: Frank Oz) appears, leading Luke to his home and revealing his true identity. It is in this upside-down antithesis world that Luke will learn that he must free himself of darkness if he is to harness the Force.

Meanwhile, Han and Leia begin to bond, eventually kissing. They are interrupted by C-3PO, who has been plugged in to the ship to learn why it is malfunctioning.

Vader speaks with the Emperor, who feels a great disturbance in the Force. The Emperor does not want Luke to become a Jedi, but would rather see Vader corrupt Luke, turning him to the Dark Side and making him their ally.

Midpoint: Yoda communicates with Obi-Wan, concerned with the anger he senses in Luke, just as he had sensed in Anakin. He refuses to train Luke at first, revealing that he has watched Luke all his life, noting that Luke has always looked to the future instead of where he was. However, there is a false victory as Yoda agrees to train Luke. The A Story, confronting Vader, and the B Story, learning to use the Force as an ally, cross paths.

Bad Guys Close In: Han realizes that the Millennium Falcon is not concealed in a cave on the asteroid, and the group flees out of a creature’s mouth, preparing to make the jump to light speed. Meanwhile, Luke trains with Yoda to confront his inner bad guys: fear, anger, and aggression, all paths that lead to the Dark Side. While stopping near a cave, Luke is told that the only thing inside it is what he himself takes in. As Luke enters, he confronts a visage of Vader in a lightsaber duel, cutting off his head. Vader’s mask falls off to reveal Luke’s face. Luke begins to learn that evil comes from within, not from without.

Vader gathers bounty hunters to find the Millennium Falcon, Boba Fett (Jeremy Bulloch) among them. When Han can’t make the jump to light speed, he evades and hides his ship on the side of the Destroyer. When the Destroyer dumps its trash, Han follows it to blend in on his way to find sanctuary with Lando Calrissian (Billy Dee Williams). Boba Fett follows.

Luke continues to face his inner bad guys, giving in to negativity and doubt. Yoda tells Luke to raise his ship from the swamp, but Luke believes that Yoda wants the impossible. “My ally is the Force, and a powerful ally it is,” Yoda tells him as he raises the X-Wing himself. He tells Luke that doubt is why he fails.

All Is Lost: While practicing, Luke senses Han and Leia in great pain in a city in the clouds. Yoda tells him that he has seen the future. The whiff of death is in the air as Luke asks if they will die.

In Cloud City, Han and the group meet Lando, who will help them fix the Millennium Falcon’s hyperdrive. When C-3PO is distracted by something, he is attacked and shot.

Dark Night of the Soul: Luke continues to be haunted by his vision and wants to aid Han and Leia, but Obi-Wan tells him he cannot control the Force yet, telling him that the Emperor wants him and his abilities. Luke promises to return to finish his training and will not turn to the Dark Side. Yoda reminds him that only a Jedi with the Force as an ally will defeat Vader and the Emperor; if he takes the easy way out, he will end up like Vader.

Break into Three: Luke departs to rescue his friends. He prepares to enter his synthesis world, one in which he trusts in the Force and refuses to give in to his fears.

Finale: Chewbacca finds the pieces of C-3PO and takes them back to Han and Leia. Lando arrives and takes them on a tour of the city, explaining that he has made a deal with the Empire to keep them out of the city’s business forever. In a high tower surprise, Darth Vader and Boba Fett await them in a room, capturing and imprisoning them.

While Chewbacca reassembles C-3PO, Vader tortures Han, offering him to Boba Fett. Lando arrives and tells the team that Luke is the one Vader wants, and their imprisonment is a trap.

Luke lands as Vader tests out the freezing carbonite process on Han, ensuring that it is safe for when he uses it on Luke. As the team is taken away, Luke confronts Vader, who encourages him to release his anger. Lando double-crosses the Stormtroopers and escapes with Leia, Chewbacca, and the droids.

Vader corners Luke, cutting off his hand as he bids Luke to join the Dark Side and bring order to the galaxy. When Vader tells Luke that he is Luke’s father, Luke digs deep down and drops to the shaft below, choosing the Force as an ally rather than Vader as he calls out to Leia, who hears him. Just as Luke weakens, the Millennium Falcon rescues him. Vader attempts to communicate with Luke telepathically, and R2-D2 repairs the hyper drive just in time as the Millennium Falcon jumps into hyper space.

Final Image: Luke has been transformed, facing his fears while turning from the Dark Side. As he and Leia stand with the droids, looking out into space, they come up with a plan to find Han and get him back. The camera pans back from the ship in a moment of brief respite before the next leg of Luke’s journey… when he returns as a Jedi.