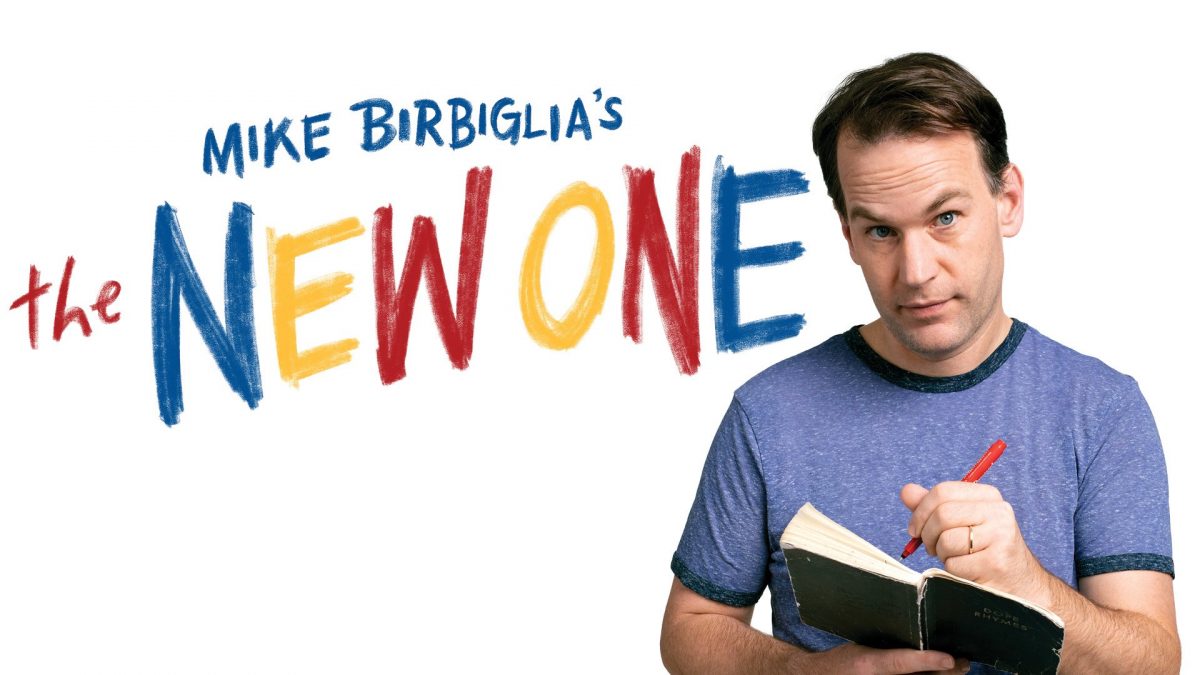 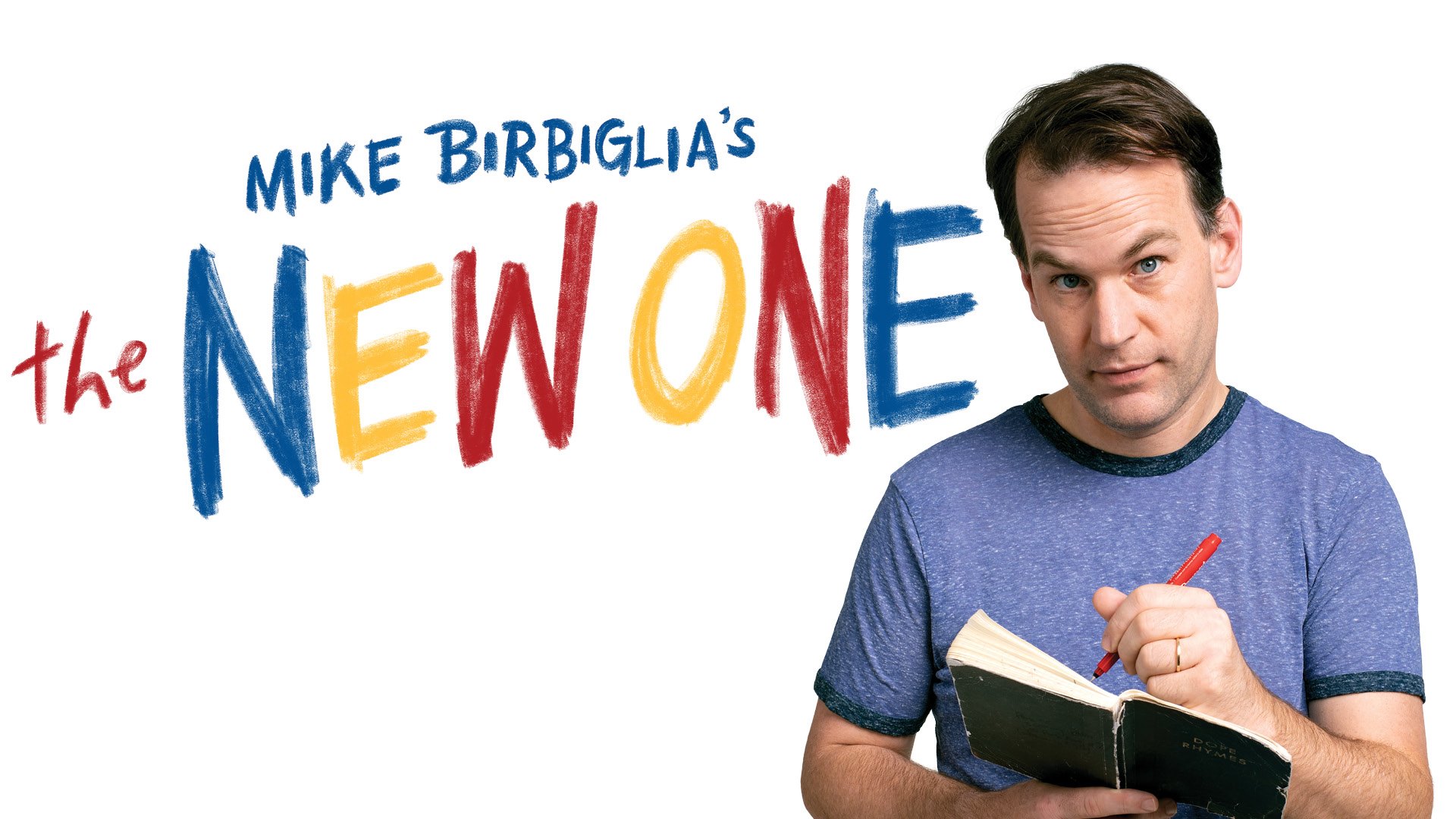 How does Mike Birbiglia’s The New One hit Blake Snyder’s story beats? Here is the Save the Cat!® beat sheet for the stand-up special:

Mike Birbiglia’s latest one-man show, recently released on Netflix, is all about a new stage of life: becoming a father. It’s a stage he enters reluctantly and—spoilers!—warms to slowly. Birbiglia delivers the story with his particular brand of humor, a mix of observational and confessional that can be slyly provocative. But does it hit the beats? Let’s see!

Opening Image: Mike Birbiglia is our protagonist and he opens with a bit that bookends this story: “First I want to tell you about my couch…”

In Save the Cat! Blake Snyder writes about how the contrast between the Opening and Final Images offers a snapshot of the transformation in the story. The New One delivers on that expectation, as you’ll see. But it’s worth noting how the couch is smartly used as a barometer of progress throughout the story as well. We can gauge how things are going in Birbiglia’s story (and life) each time we check in with his couch.

Theme Stated: At about minute 4, in response to learning one of his audience members is 11 years old, Birbiglia says: “Before we proceed, I want you to know that I am not doing anything wrong. You just have bad parents.”

Set-Up: Birbiglia tells us about his marriage to wife Jen ten years earlier, and about the couch as an integral part of that relationship. “We’ve spent thousands of hours together on this couch.” He travels constantly for work (the life of a stand-up comedian), and each time he returns he collapses on the couch and his wife revives him with comfort, food, and attention.

In the Set-up we also learn just how much Mike dislikes kids. “Kids are like a disease but worse because [people with kids] want you to have it too.”

Catalyst: The Catalyst moment happens a bit late in relation to the length of the show, and it’s worth asking: if that’s the case, does the story still work? I believe it does, and there are a few contributing factors. First, even though we’re waiting for the Catalyst moment longer than usual, we’re never not entertained. There’s a constant stream of jokes to keep us engaged. Also, the scenario Birbiglia describes leading up to the Catalyst contains plenty of conflict, so it doesn’t feel like we’re treading water. 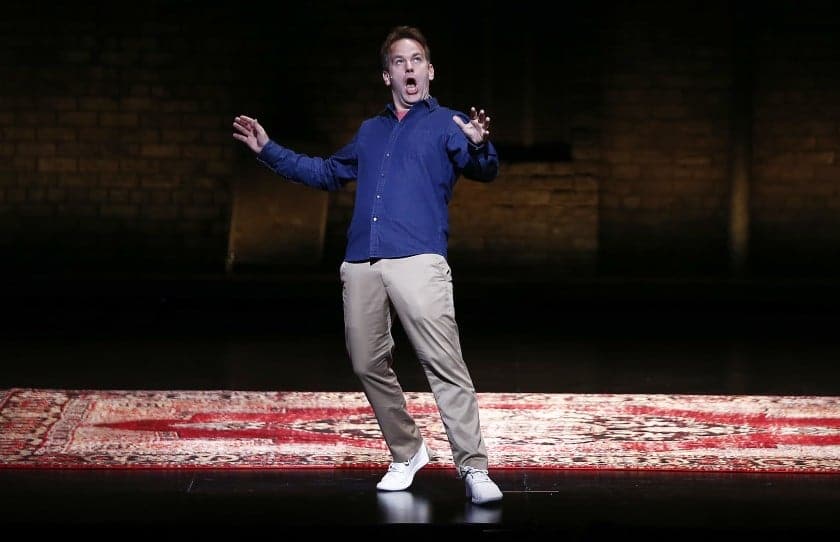 So we hear of a visit to his older brother’s house. Birbiglia describes him this way: “My brother Joe used to be so cool. And then he had two kids. And now he’s a loser. Okay, he’s not a loser. But it’s less fun to visit his house now.” Birbiglia spends a breakfast being shown videos of his nephew while simultaneously being whacked in the eye with a foam bat by said nephew.

At about minute 13, Birbiglia returns home to his wife and tells her, “People with kids are miserable.” He expects her to readily agree, but instead Jen says: “If we have a baby, I think it would be different.”

She wants to have a baby! This is a problem and he MUST deal with it – which is exactly the effect a good Catalyst should have.

Debate: Birbiglia tells us that when he and Jen got married, they were both clear: no kids. But now she’s changed her mind. And so a process of negotiation unfolds. Jen insists that having a baby doesn’t have to change the way they live their lives. Birbiglia disagrees, and has “seven specific reasons” he doesn’t want to have kids. As he explains them to Jen, we hear his logic too.

The first reason is his long list of health issues, including the sleep disorder he’s famous for. He “believes in survival of the fittest,” and he’s “not exactly handing off A+ genes here.”

Break into Two: Birbiglia’s second reason is the most important one and it creates the structure for the story: He loves his relationship and things as they are right now. He doesn’t want their lives to change. This is essentially the story goal against which we’ll be marking Birbiglia’s progress. Will he succeed or fail at keeping his life exactly as he wants it—unchanged?

B Story (30): If Birbiglia’s journey of becoming a father provides the A Story, it’s easy to see how his relationship with wife Jen provides the place where he learns the lesson of the theme which helps him along that journey. Even though these two storylines are very closely entwined, each has its own arc that can be tracked separately too.

Fun and Games: In the Fun and Games section, Birbiglia outlines the rest of his reasons for not wanting kids, all illustrated via hilarious bits and anecdotes. His points revolve around his essential unpreparedness for the task of raising a child, the fate of the planet, gender inequality, and how people “aren’t great” in general—men, in particular.

But his wife, who he loves, thinks he’d be a good dad. That seals it.

However, because Birbiglia’s body is “a lemon,” they have trouble conceiving. And so he embarks on the awkward and embarrassing journey of medical intervention for his fertility issues.

Midpoint: Birbiglia learns from his doctor he’ll have to undergo a surgical procedure if he wants to be able to get his wife pregnant. He laments that he doesn’t even want to have a kid!

His doctor tells him, “No men want to have kids. Our wives want us to and we go along with it. But it’s the best thing that will ever happen to you. You’ll call and thank me. It’s the most joy you’ll ever experience.”

So Birbiglia will have to go to greater lengths and risk much more in order to have a chance of succeeding. This is definitely changing the way he’s living his life! But he’s been promised that it will be “the most joy” he’s ever experienced—that’s what he stands to gain. Stakes are raised!

Bad Guys Close In: The bad guys closing in shows us—they get pregnant! That’s a good thing, right? But remember: the story goal we’re tracking is Birbiglia’s life staying the same. This is a big step toward things changing!

And we learn all about the changes his wife experiences, and which Birbiglia must go along for the ride: off-the-charts hormones, cravings, morning sickness, bleeding placenta, hyper-mobile hips, annoying birthing class…

For the first two trimesters, it’s a rollercoaster. But thankfully, in the third trimester everything gets better. During one quiet, peaceful moment, Jen tells Birbiglia she knows he was reluctant to become a father and she wants to make sure having a baby doesn’t change the way they live their lives.

The next morning, their daughter Oona is born. Birbiglia explains the experience of watching his wife accomplish the amazing feat of giving birth. In an instant, she had become a mother, he says, “and I pretty much stayed the same.” If she’s changing and he’s staying the same, what does that mean for their relationship? We’re heading toward internal and external low points…

All Is Lost: Birbiglia tells us Oona wouldn’t sleep for a year, “and that’s when I remembered I didn’t want to have a kid.”

In a surprise physical gag that delights the live audience, a tidal wave of baby paraphernalia falls from the ceiling onto the stage. Exactly the kind of stuff Birbiglia described seeing (and despising) on his visit to his brother Joe’s. A change in his home environment, for sure. 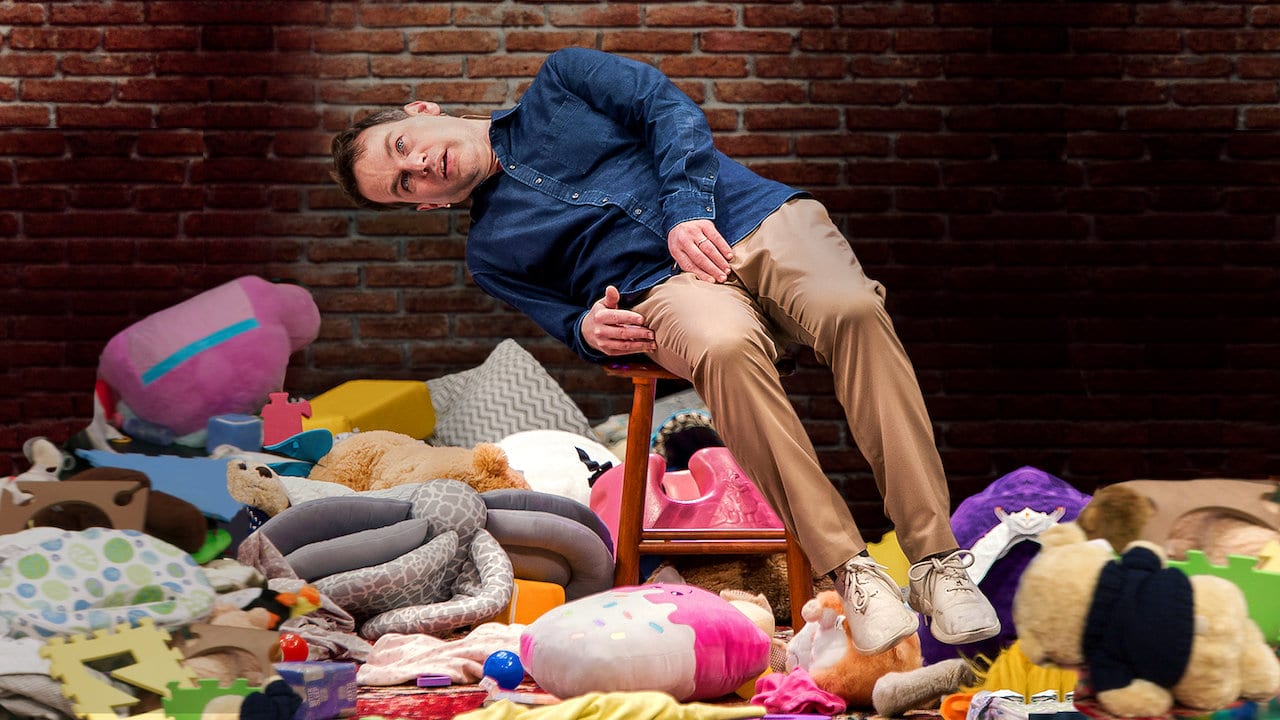 And worse: “None of it works.” His wife hasn’t slept in weeks. “But I’ve been sleeping pretty well.” It’s a mixed blessing, though. Because of his sleep disorder, Birbiglia must sleep in a separate room from his wife and daughter. His only company is their cat, Mazzy, who wakes him each morning by scratching his face.

Dark Night of the Soul: One morning, he finds his wife crying and when she explains why, it’s because she’s realized that Oona will never be in her belly again. Birbiglia realizes that’s how close the bond is between his wife and his daughter. It’s the most profound level of love. “And there I was too.” He’s outside of their special bond, and feels redundant. He likens himself to “the VP of the family.”

Break into Three: This sends us toward the resolution of the story, or what Blake referred to as the synthesis. Birbiglia likes things the way he likes them—with all of his wife’s attention directed toward him. But over Act 2 they’ve embarked on a new stage of their life together: creating a family. How will he synthesize those two things?

Finale: When Birbiglia returns from being on the road the next time, the reception is different. Oona is asleep on the couch, his couch, and Jen takes Oona’s side—putting her needs first. Birbiglia decides to “win back his wife from his daughter.”

That, of course, doesn’t work. Oona’s needs do come first. Their lives must change.

Birbiglia does manage to share some special moments with Oona. There’s a spark of hope. But is it enough for him to keep going? After one particularly stubborn moment, Jen tells him he’s “in the way.” He tells us that his wife is “in the greatest love affair of her life,” and he’s on the outside looking in.

But her comments help Birbiglia see how self-centered and unhelpful he’s been.

Soon after, Mazzy the cat destroys the beloved couch and there’s no alternative but to get rid of it. Birbiglia makes other changes too, like doing the dishes for the first time. Because, sure, Jen’s the center of Oona’s universe—but that also means the bulk of the work is falling on Jen’s shoulders. The transformed Birbiglia can finally see that, so he steps up and begins participating in the new version of his life

The family goes out together to buy a new couch, and Birbiglia describes a mundanely magical afternoon… pure joy in the middle of the furniture store. All of the new-parent reactions Birbiglia mocked before? He experiences them himself. 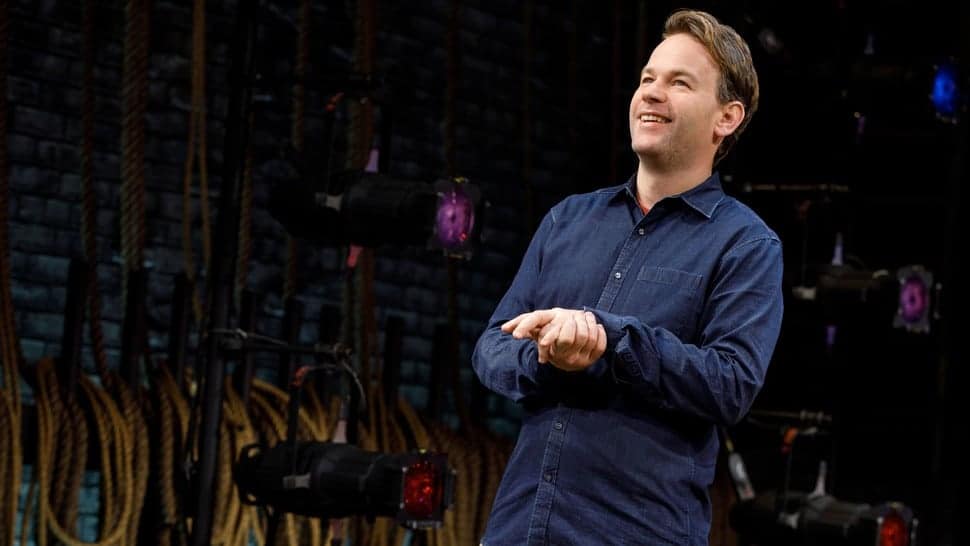 Final Image: We’re left with the image of a happy family, “laughing as one.” No longer a couple, now there are three. Things have changed, but more than anything… Mike Birbiglia has changed. He says: “In that moment, I feel full. I’m seeing the world through baby’s eyes.”

Save the Cat! In Netflix's You