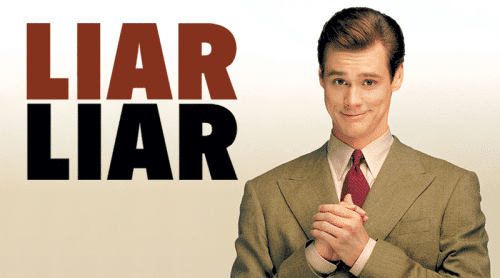 With Jim Carrey gracing the screens today in Dumb and Dumber To, we thought this was the perfect time to break down one of his greatest hits.

Opening Image: In an elementary school classroom, kids are telling about what jobs their parents do. Max Reed (Justin Cooper) tells everyone that his father is a “liar.” The teacher thinks he must have meant “lawyer,” but Max just shrugs when she corrects him.

Set-Up: As Fletcher Reed (Jim Carrey) exits the courthouse, he stops for an interview about his recent victory. This makes him late to pick up Max, and when he finally arrives, he is greeted by his ex-wife Audrey (Maura Tierney). Fletcher spins lies to explain his tardiness but promises to take Max to see a wrestling match. When Fletcher meets Audrey’s boyfriend Jerry (Cary Elwes), who is moving to Boston for his job, Audrey mentions that Max will miss Jerry. Fletcher replies that he will be there for Max, but it is evident that he is unreliable. Arriving at the law firm, Fletcher’s secretary asks Max about his birthday, causing Fletcher to realize that he had not only forgotten to get Max a gift, but had forgotten about the birthday party.

Theme Stated: Miranda, one of the lawyers at Fletcher’s law firm, asks an attorney to represent a client in a tough case, one that would be difficult to win given the circumstances. The lawyer tells her that he will only represent the client in an ethical manner, but he will not lie. The importance of telling the truth is the lesson Fletcher will need to learn in this journey, one that will turn his world upside-down.

Catalyst: While Max is excited about spending time with his dad at the wrestling match, Miranda approaches Fletcher with the case the other attorney would not take. Now, he must work through the night, breaking his promise to Max.

Debate: Jerry proposes to Audrey, which would mean moving to Boston with him. The next morning, Fletcher gives Max a birthday gift his secretary bought, but he does not have time to play with Max, letting him down once again. Fletcher meets his client, who clearly does not have the truth on her side. Even so, Fletcher manipulates her into believing that she is the victim in the case, and she is relieved to have an attorney she can trust. Miranda tells Fletcher that if he wins the case, he would most certainly make partner at the firm.

At Max’s party, Audrey tells Jerry that she can’t move to Boston because Max needs Fletcher. Meanwhile, Fletcher sleeps with Miranda and calls Audrey to say that he will have to miss Max’s birthday party. Max learns that his dad will not be in attendance, and, tired of the broken promises, wishes that for only one day, Fletcher can’t tell a lie.

Break into Two: The wish comes true, and Fletcher cannot lie for one day. This is the antithesis of all he knows, and he must use truth instead of lies if he is to win the case.

B Story: The ongoing B Story is Fletcher’s relationship with Max. While Fletcher might win the case in the A Story, he might lose Max in the process.

Fun and Games: Suddenly stricken with the inability to lie, Fletcher insults Miranda and makes inappropriate comments to others. In court, when he encounters the plaintiff’s lawyer, Fletcher tries to state his defense, but he literally cannot say it; he doesn’t know what is happening. He asks for a continuance, but due to his inability to lie, he can’t provide a good reason. The trial will happen at 1:30, and he races into his office to seek refuge. He must confront the upside-down version of his world and find a way to deal with it.

Fletcher’s original defense in the case revolved around bending the truth, but now he cannot. And because he isn’t able to settle in court as originally planned, he can’t pick Max up from school. Max tells Audrey about his wish, and Audrey tells Fletcher she is moving to Boston. Fletcher wants to talk to Audrey and speeds while driving, drawing the attention of a police officer. Forced to tell the truth, Fletcher has his car impounded.

Midpoint: Audrey takes Fletcher to the impound lot to get his car. The B Story crosses with the stress of the A Story as he admits that he’s a bad father and begs for a second chance. In a false victory, Audrey says she will not move to Boston if he can make it to see Max in time after the trial, and so a time clock appears, raising the stakes. Audrey also tells him about the wish, and Fletcher learns why he can’t lie.

Bad Guys Close In:  Thinking that he now has the solution to his problem, Fletcher tries to get Max to un-wish the wish, but it doesn’t work. Fletcher’s secretary quits due to his past lies. Miranda makes Fletcher speak in front of the firm’s partners, and he insults them. At court, Fletcher tries to stall using unorthodox methods such as beating himself up. The trial goes from bad to worse until Fletcher discovers a loophole, winning the case. His client changes her mind about joint custody of the children, wanting to hit her ex-husband where it hurts. Fletcher realizes that he has represented the wrong person.

All Is Lost: Fletcher argues about his win, saying that just because the judge bought the defense doesn’t make it right. This angers the judge, and Fletcher is taken into custody and held in contempt of court. Now, he will miss seeing Max in time, and Audrey will move to Boston. The whiff of death is in the air as his relationship with Max faces an end.

Dark Night of the Soul: Fletcher calls Audrey and asks for bail, saying he is a changed man, but she hangs up on him. His former secretary bails him out, and while Fletcher knows he is fired, he is actually happy, wanting to start his own firm. Most importantly, he must see Max. He has learned his lesson, and in a display of synthesis, he notes, “This truth stuff is actually pretty cool.” He runs off shouting that he loves his son.

Break into Three: Fletcher races to the airport to stop Audrey and Max from leaving. Before, he would lie and would not care about missing time with his son, but now, nothing else matters to him.

Finale: Fletcher sneaks onto the runway through a baggage terminal and hijacks a set of movable stairs. Driving alongside the plane, he is able to get the pilot to pull over and stop. Before he is taken away in an ambulance, Fletcher digs down deep and tells Max he loves him and will never hurt him again. At first, Fletcher and Max think the statement is true because of the wish, but the 24 hours are over. Fletcher realizes he was telling truth on his own, evidence of his transformation. Audrey and Max are not moving to Boston.

Final Image: One year later, it is Max’s birthday. After blowing out the candles, Fletcher and Audrey are embracing and kissing. As Fletcher chases them around with “the claw,” it is clear that the truth has transformed Fletcher, and it has healed this family.

Save the Cat!® Podcast: Does Change Have to Be Transformation?