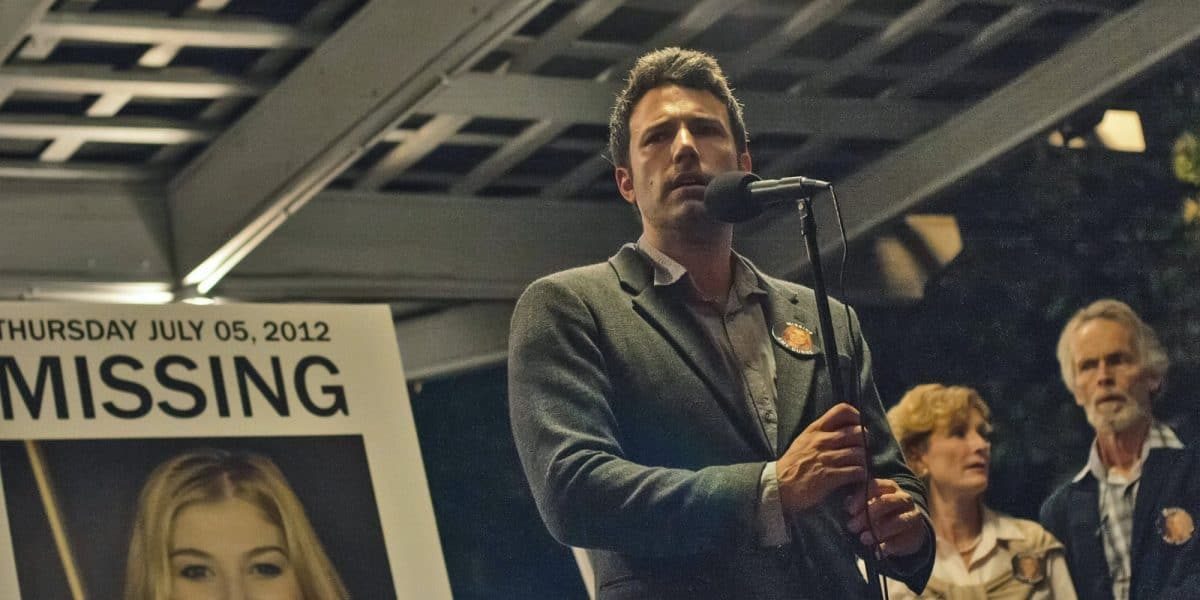 Thanks to Master Cat! Ben Frahm for this captivating breakdown.

Adapted by: Gillian Flynn (based on her own novel).
Directed by: David Fincher

Opening Image: Amy Dunne (Rosamund Pike) rests her head on her husband’s shoulder, Nick Dunne (Ben Affleck). We hear Voice Over (V.O.) from Nick talking about “cracking her skull open and unspooling her brain,” and we immediately become concerned for Amy’s well-being.

Set-Up: Amy and Nick are married. They seem happy enough. In fact, today is their 5th Anniversary. They have recently relocated to the Midwest from New York City. Both Nick and Amy are writers. Amy is more successful, receiving royalties from a popular children’s book series her parents wrote titled “Amazing Amy”—about a seemingly perfect and accomplished young woman. Nick lost his job while in New York and Amy has had to carry them financially for some time. Amy bought Nick a bar to help support them. Nick supplements his income working as an adjunct professor at a local community college. Nick’s twin sister works at the bar. Nick and his sister seem to have a very close relationship. Through flashbacks we get to see Nick and Amy’s first meeting. We see them fall in love. We meet Amy’s parents. We introduce their careers, and also their financial hardships. Amy is an Ivy League-educated, Type A, driven, accomplished woman. Nick seems more All-American, kind-hearted, and always unassuming.

Theme Stated: What have we done to each other? That question is asked by Nick in his first V.O.—and repeated more than once, including at the very end.

Catalyst: Nick returns home from visiting his sister at the bar, only to discover that his wife is missing. Amy is gone!

Debate: The police are called. A formal investigation begins. Parents are notified. Neighbors show concern. And we are left with a big question: What happened to Amy? Where is she? And based on Nick’s somewhat nervous and anxious and occasionally unpredictable behavior, we start to believe it might be him. Is Nick the killer? Does Nick know where his wife is? What is Nick going to do? Run? Hide? Or help find Amy…

Break into Two: Nick, during a formal press conference and alongside Amy’s parents, vows to do everything in his power to find his missing wife.

Fun and Games: The A Story is: Nick and the investigators trying to find his missing wife. And it seems the further they dig, all signs point to Nick. This is the “upside-down world” to our First Act—Thesis Act. If the First Act is about how “perfect” Amy and Nick’s relationship is… the “upside-down” version of this world, the Anti-thesis Second Act, is—“Nick now being accused of killing his wife.” The B Story is told through flashbacks. We continually and consistently get to experience the conception and development of Nick and Amy’s complicated personal lives.

The detectives find a letter in Amy’s lingerie drawer. In the letter there is a clue that leads them to Nick’s college office, where someone’s lingerie is found. Nick is acting suspicious. Meanwhile, we’re cutting back to a previous life of Nick and Amy in New York City. They have fallen on hard times. Nick loses his job. His Mother is not well. And they must return home. In present, Nick explains that the letter and clues are merely a part of their wedding anniversary celebration. The investigators don’t wholly believe this. That night, while crashing at his sister’s apartment, Nick is visited by a young woman. He is having an affair with this woman, his college student. Nick is looking more and more suspicious.

New information is uncovered. Apparently Nick took a “selfie” with a “female admirer” at the press conference for his missing wife. This has gone viral and the news media is having a field day with Nick. Massive credit card debt is discovered and linked back to Nick. A life insurance policy, recently signed, is also linked back to Amy and Nick’s signature. Nick’s behavior is looking more and more suspicious. The crime scene in Nick’s house doesn’t make sense. It almost looks like a cover-up. And another “clue” letter pops up, this one pointing them to Nick’s father’s house, where Amy’s diary is uncovered. And this diary says some pretty alarming things about Nick. Amy claims to not feel “safe around her husband.” Also, when we flashback yet again, we see Nick become physical with Amy. A seemingly pedestrian argument escalates into something much more telling, and Nick pushes his wife to the ground, her head slamming the staircase post. Is Nick this monster that everyone seems to make him out to be?

Midpoint: Nick must make good. He must show people that he is innocent and that the media is portraying him incorrectly. Nick must shift everyone’s attention back to what is necessary—finding his wife. So Nick gives a speech at a townhall-esque meeting/vigil for Amy, held outside in a park. A female neighbor and good friend of Amy’s comes forward. The Neighbor informs everyone that Amy was pregnant. Gasps and shock are seen across everyone’s faces. The public is convinced that Nick killed his wife because he didn’t want kids. Nick must be guilty…

Bad Guys Close In: The Detectives show Nick Amy’s diary. They walk him through the crime scene. They now reference her pregnancy. All arrows point to Nick. And the detective who was at once on Nick’s side has now been persuaded otherwise. A formal investigation is now underway— with Nick as suspect #1. Nick finds a Letter and Clue #3. This clue leads him to a shed. In that shed is a bunch of “fun, guy things.” And Nick realizes that this is all a set-up. Nick didn’t buy these things. They were planted there to look like he’s going to “celebrate” once his wife is gone. This explains that massive credit card debt as well. Nick must find the person who set him up…

CUT TO: Amy driving in a car. She looks happy. She looks well. And she’s driving towards the beaches of Mexico??!! That’s right. Amy is at the center of all of this. Through V.O. and flashbacks we come to learn that Amy set Nick up. Amy grew tired of the relationship. Amy got angry when she learned of his affair. And no one messes with “Amazing Amy.” So Amy wanted out and she wanted her husband to take the fall. And being a skilled and thoughtful writer, she has crafted and laid the most intricate and thorough set-up of all time. From the break-in. To the letter clues. To the credit card debt. And now she even plans to kill herself in the ocean, realizing this will lead to ultimate revenge—the death penalty for her husband.

BACK TO NICK: He is frantic. He’s starting to put it together that this is his wife’s doing. Nick even goes to see an ex-boyfriend of Amy who confirms her manipulative and exploitative ways. The boyfriend says that Amy once accused him of rape. Nick is starting to realize the level of insanity that is his wife. Nick wants to know more and calls another former boyfriend. This “rich guy,” Desi Collings (Neil Patrick Harris), still has feelings for Amy. Even though Amy once had to get a restraining order on him, he won’t help Nick in his quest for innocence. Nick calls an attorney (Tyler Perry). He’s the best legal counsel money can buy. Nick and his attorney start planning a course of action to prove his innocence.

Meanwhile, Amy is hiding out, somewhere in Texas. She’s at a run-down motel, and she has plans of her own. She will kill herself in only a matter of days, and Nick will take full blame. Nick’s attorney sets up a high-profile media interview to help get him better face time and rapport with the public. At the motel, two other residents, who have befriended Amy, notice that she has money stashed away in her room. They mug her and steal her money. Now Amy has nothing. No money. Nowhere to stay. And she’s afraid. So she calls… Desi, and goes to hide out in his lake house.

Right before Nick’s television interview, the college student comes forward. She tells of her affair with Nick. However, Nick still takes the television interview. He proclaims his innocence and also acknowledges his wrongdoings—in his affair. Nick looks directly at the camera and speaks passionately about the love that he still has for his wife. And at the lake house, Amy is watching on TV. She hears this and something switches in her. She wants her husband back. She believes that he still loves her. However, the manipulative Desi is having renewed feelings for Amy. He won’t let her leave. Now she is trapped.

All Is Lost: With the revelation of the affair and growing public disapproval, the investigators have enough to arrest Nick. Nick is arrested. We fear that Nick’s innocence will never be proven.

Dark Night of the Soul: Amy wants out of her creepy ex-boyfriend’s lake house. Amy stages a sex scene. A rape scene. And now, during a moment of passion, kills Desi. Amy leaves… Nick is bailed out of jail by his attorney. Chased and threatened by the public, he runs. Nick is about to give up on proving his innocence… when…

Break into Three: Amy returns home. And she’s going to set everything straight. Nick’s compelling TV interview made her realize she still loves him. And this gives Nick the final chance to prove his wife’s insanity and clear his name. Nick has a new plan:

Finale: Amy tells new lies. She says that Desi kidnapped her, held her captive, raped her. And that her only course of survival was to kill him. Amy still loves Nick. Nick has been innocent this whole time. And she will work hard to repair their marriage. However, Nick realizes the danger and severity and illness of his wife. He tries to get her to confess her doings. He tries to record her. But she’s too smart. She’s too thorough. And Nick once again fears for his safety. So Nick decides to leave. He will leave her once and for all, and move on in his life. And now, right before a final TV interview, now staged at their home: Nick is going to set everything straight. He’s going to leave Amy. Right before the interview, “Amazing Amy” gives her husband a present. It’s a pregnancy test. She’s pregnant with Nick’s child. Now he can’t leave. Nick fears for the child’s safety as well as his own. And Nick feels forever trapped. Nick tells his twin sister he can’t leave now. His sister sobs… she knows her brother is trapped again. On Nick’s panic-stricken face…

Final Image: We cut to a familiar image. It’s the opening image of Amy lying on Nick’s chest. And this time, the once alarming words have new meaning: “I picture cracking her lovely skull, unspooling her brain… trying to get answers.” The primal questions of a marriage and our story’s theme: What are you thinking? How are you feeling? What have we done to each other?

When All Is Lost, Your Story Succeeds

A Tip from Our Screenwriting Workshops: Are You Spidering?