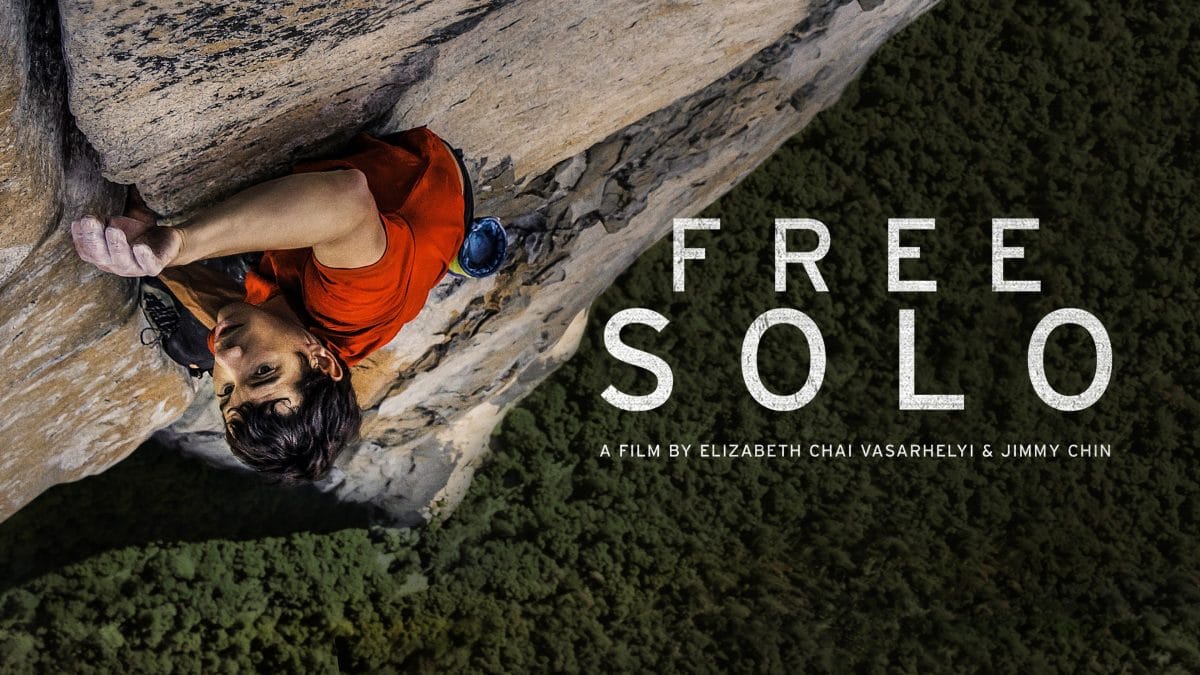 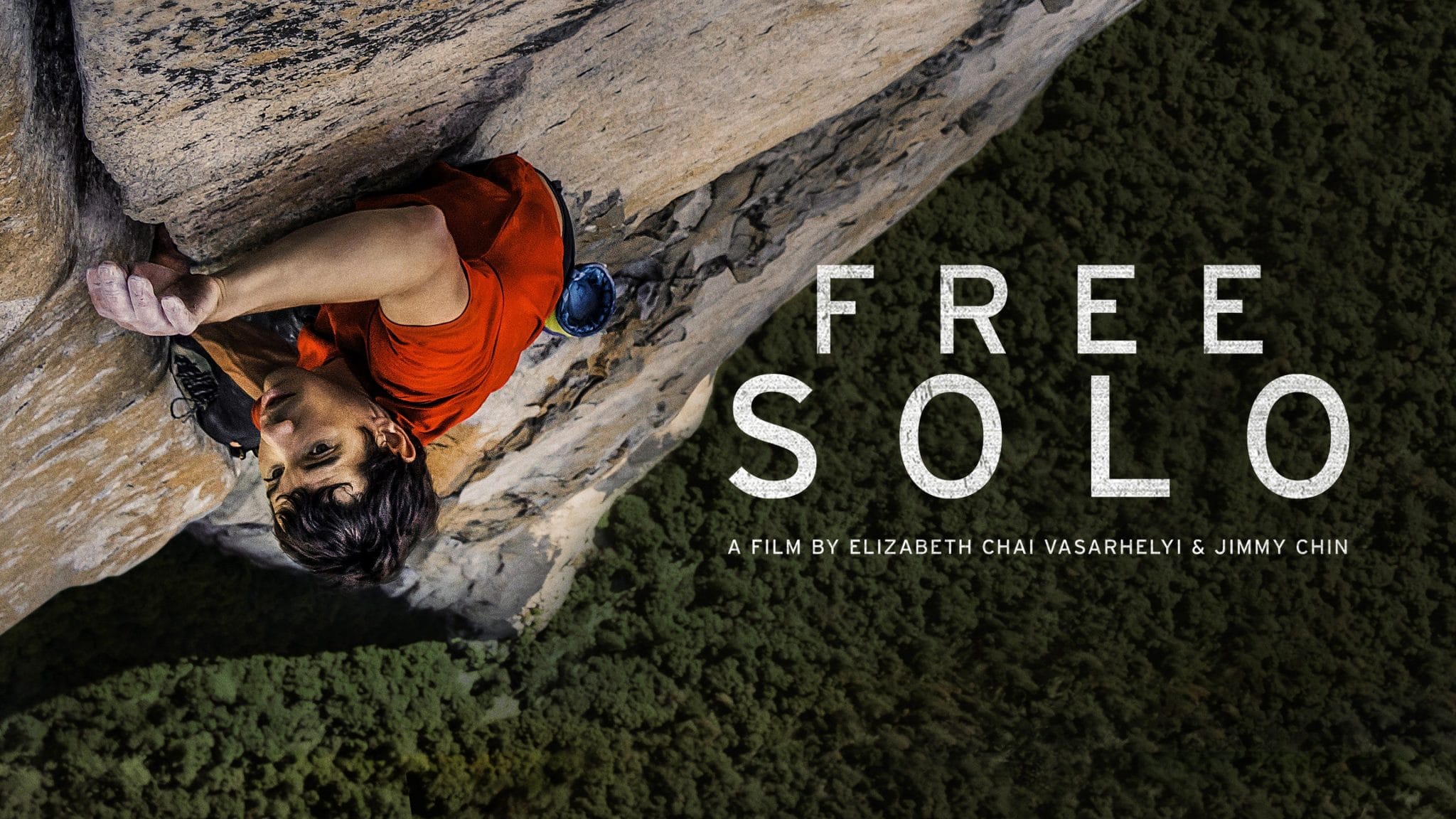 How does Free Solo hit Blake Snyder’s story beats? Here is the Save the Cat!® beat sheet for the film:

The Oscar®-winning Best Documentary Feature (2019), Free Solo is, like all good Institutionalized stories, about a conflict of values and a choice. In this case, our hero Alex believes in achievement above all else, and that requires focus and dedication—there’s no room for distraction. The “Company Man” in this story is Alex’s new love interest, Sanni. She represents the group’s values: love and human connection. The “sacrifice” that brings about the story’s ending? Read on to see…

Opening Image: A lone rock climber ascends what looks like an impossible cliff face. In V.O. we hear a talk show host announce, “Our next guest is a free-soloing phenomenon…”

Set-Up: She’s talking about Alex Honnold, the subject of this documentary. He has completed over one thousand free-solos, and is exceptional at this sport—rock climbing without a rope—which requires both a near-obsessive pursuit of excellence and a lot of time alone. Alex has already accomplished so much, what’s next? El Capitan, which Alex describes as “the most impressive wall on Earth.”

We learn about Alex’s lifestyle, which is nonstop traveling and climbing. And living in a van, which he loves.

Catalyst: About 7 minutes in, we hear: “So you have a girlfriend now…” And Alex responds, “Trending toward one.”

When we meet Alex, he’s already a world-class free-solo climber, and has his sights set on El Capitan. None of that is new. The change to his “normal world,” the monkey wrench in his plans, is this new, possible-relationship.

She’s very supportive, he says, but he “will always choose climbing over a lady.” Or at least, he always has. Which will he choose now?

Theme Stated: As Alex ponders whether he’ll be able to free-solo El Capitan—which would make him the first person to do so—he says, “I’ll never be content unless I put in the effort.” But he goes on to say he might discover “it’s just for someone who has less to live for.” And this is really what the movie is about: the conflict between going it alone versus forming attachments.

Debate: In the Debate section we reinforce how dangerous this endeavor is. Friend and professional climber Tommy Caldwell, who has climbed some routes that others have never been able to repeat, says he would never climb El Capitan without a rope.

We also get a sense of what this type of climbing means to Alex. As a kid, Alex started free-soloing because he was too shy to talk to other climbers, so he just climbed alone.

And when Alex picks up new girlfriend, Sanni, we get a sense of what he’s risking. He says having her around, “pretty much makes life better in every way.” He’s never been able to balance climbing with a personal life before, or truly wanted to. Will their relationship survive this? Will he?

Once when Alex and Sanni climbed together, she accidentally dropped him. He suffered compression fractures in two vertebrae and thought about breaking up with her. Ultimately he didn’t—establishing the goal that gives this story its shape. But the experience also rattled him. Now he has a new and very real sense of what will happen if he falls while free-soloing.

Break into Two: Alex begins the long road to El Capitan by arriving in Morocco to start training in earnest.

B Story: The B Story is Alex’s personal relationships. Primarily his romantic relationship with Sanni, but also his relationships with friends and family. The B Story explores how Alex navigates that balance between being alone and being with others, as well as the effect his risky lifestyle has on those relationships—and vice versa.

We’ve already met Sanni and Tommy. Now we meet the film crew, who are also all professional climbers and friends of Alex’s. They’re conflicted about filming this endeavor since it might put undue pressure on him.

Later we’ll learn about Alex’s childhood and family, though, and see that the pressure to achieve originated in those formative relationships. One of his mother’s favorite phrases was, “good enough isn’t,” and Alex always felt driven to perform.

Fun and Games: The fun & games of this movie is watching Alex prepare and train for what he’s about to attempt, and learning the intricacies of the climb.

We see how Alex approaches the mental aspects of what he does. He talks about “stepping outside his fear” and “expanding his comfort zone” through practice.

He suffers another injury—also while climbing with Sanni—this time a sprained ankle. It increases the conflict since the climb he’s training for involves wedging himself into cracks, which an ankle injury would impede.

In this section we also continue to explore the meaning of the story, that philosophical conflict. We see Alex and Sanni around friends’ families and learn Alex has a hard time communicating his feelings. His family never used the word “love.”

Alex insists that if he dies, life will go on for his friends and family. But there’s a satisfaction to challenging yourself and pursuing perfection, and free-soloing is about the closest thing to perfection.

Friend Tommy Caldwell says, just like you need mental armor in order to free-solo, you need to have armor in order to be Alex’s friend. Because what he does is so risky, you have to be able to mentally gird yourself for the worst outcome.

Can you have the mental focus and “armor” necessary to free-solo, and also be emotionally vulnerable enough to be in a relationship?

Even though this isn’t a “typical” Midpoint, if you look closely it nicely raises the stakes, which is one of the important functions of a Midpoint.

Bad Guys Close In: As Alex gets closer and closer to his big climb, the mood grows more serious, more intense. His friends talk about how stressful it is to watch him attempt this. The crew carefully works out where they can place the cameras so they don’t “accidentally kill him.”

Peter Croft, a veteran free-solo climber, talks to Alex about doing it for the “right reasons,” raising the question of Alex’s motivations. Why do this at all?

At the same time, Alex isn’t telling Sanni much about his preparation. Only when she asks him directly does he finally admit that the climb is nearly upon them.

They have a frank conversation in which she asks if he would “ever take [her] into the equation?” When does the achievement become not worth the risk? Alex says if he felt obligated to maximize his lifespan for her, that would be a consideration, but he doesn’t feel that obligation to her now.

The morning of the climb arrives. It’s dark when Alex begins his ascent. After only a short distance, he bails on the climb. Something doesn’t feel right. He can’t do it.

The crew is disturbed; he’s never given up before. Back at his campsite, Alex breaks the news to Sanni, then to Peter Croft. They’re nothing but supportive, but he clearly feels like a failure.

All Is Lost: Alex moves to Las Vegas and buys a house with Sanni. It doesn’t feel like a bad thing. He’s alive, he’s in love.

But that goal, though. He appears to have completely given up on it.

Dark Night of the Soul: Is giving up the right thing to do? What is life really about? Alex believes it’s about performance, achieving something great. Sanni believes it’s about happiness and being with people you love. But as Alex says, “Nothing good happens in the world by being happy and cozy.”

Break into Three: Perhaps a bit early—around 68 minutes in—Alex heads back to the same pitch where he bailed on El Capitan. He tells us, “Maybe I can find another way,” a classic “Break into 3” synthesis sentiment.

What Alex seems to have learned is that other people—and the connections you have with them—don’t have to hold you back. Instead, they can give you more reason to show up and give 100%.

Then Alex learns of the death of friend and fellow climber Ueli Steck. Alex seems to accept death as a possible risk, but points out that “Ueli talked about doing sketchy climbs that you just kind of squeak out once, and I’ve always tried not to.”

As Alex continues to prepare, the people around him show up as a support system. Tommy says, “I know he’s going to do it, so I’d like to be there to help him prepare as well as he can. If he went to solo it and fell and died, and I hadn’t helped him prepare? That would be harder for me.”

The crew discusses that tomorrow might be climb day—they ready camera setups that won’t distract him—and agree on what to do if something goes wrong. Jimmy ends the meeting with a somber, “No mistakes tomorrow.”

Sanni hugs Alex goodbye the day before his climb. He didn’t ask her to leave, but she understands it’s easier for him if she’s not there. Alone, she talks about trying not to think that’s the last time they’ll see each other. Sanni doesn’t truly understand why Alex needs or wants to attempt this climb, but she won’t hold him back and, in fact, she too will do everything she can to help.

The next day, Alex climbs. From the beginning the climb seems different this time—he’s different. Alex moves fast, ahead of schedule. As he makes progress it gets harder and harder for friend and cameraman Mikey Schaefer to watch. Sure, with every foot he climbs, Alex is nearing the end. But he’s also getting farther from the safety of solid ground.

Finally Alex gets a little victory as he successfully navigates a spot he’d worried over while training. Watching him, Mikey says, “Alex is having the best day of his life.”

And then Alex reaches 2980 feet—just one final pitch—and then the top. He made it. We hear reactions from the crew, including: “I can’t believe what I just witnessed.” Alex didn’t go it alone—his friends were there with him.

Alex calls Sanni to tell her it’s done and they both fight back tears. Finally we hear him tell her he loves her, a nice payoff to nail home the change we’ve seen him go through.

During a post-mortem with the crew, one says, “A normal person would probably take the day off,” but Alex heads back to his van to keep training.

Final Image: Alex Honnold is the first person to free-solo El Capitan. In an interview, Alex acknowledges that eventually someone will think of something bigger to climb.

As Sanni watches, he continues, “But I don’t know if that’ll be me. Maybe.” And our final image is the contrast between her worried expression and his broad smile, and we’re reminded that the struggle between those competing values continues. 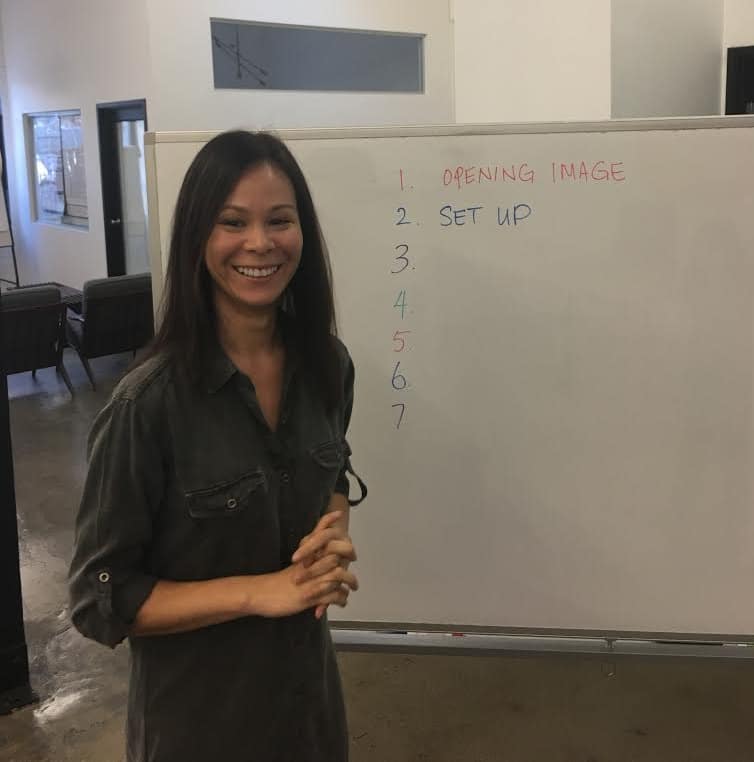