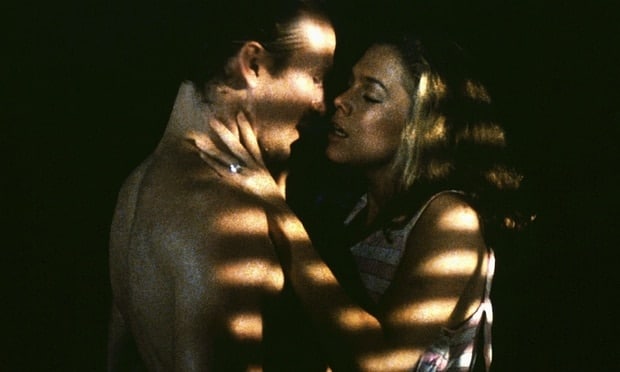 Written and Directed by: Lawrence Kasdan

Opening Image: From his bedroom window, Ned Racine (William Hurt) watches a building across town in flames. Behind him, a woman gets dressed; their banter is sexy. And underscoring it all, their coastal Florida town is in the throes of an unprecedented heat wave. This will be a hot and steamy tale.

Set-Up: Ned is a lawyer who represents small-time con men and petty criminals, and seems more interested in his sex life than his professional life.

Theme Stated: As a judge he goes before puts it, Ned needs either “a better defense, or a better class of client.” This statement nicely sums up Ned’s situation in this movie, as he’ll be out of his depth when he meets…

Catalyst: Matty Walker (Kathleen Turner), the “well-tended” wife of a wealthy businessman. Even though she tells Ned immediately that she’s a married woman, their chemistry is irresistible and he begins to pursue her.

Debate: After their first chance meeting, Ned returns to the beachfront walkway site of the encounter hoping to run into Matty again. Even though he has other female companionship, he can’t seem to get Matty off his mind and finally tracks her down at a bar in her more upscale neighborhood. Their flirtation sizzles, her husband is out of town, and when he follows her home to “see her wind chimes,” they end up in bed.

Break into Two: Their affair continues, but Matty tells Ned that no one can know about it. They have to be careful.

B Story: For maybe the first time, Ned’s not talking about his latest conquest to his best friends, prosecutor Peter Lowenstein (Ted Danson) and Detective Oscar Grace (J.A. Preston). Their eagerness to hear about his escapades is all in good fun now, but as the story progresses their interest will turn more serious, and official.

Fun and Games: As they carry on, Matty begins to drop hints about her husband, Edmund Walker (Richard Crenna), who will be coming home soon. Matty paints a picture of a mean, controlling man. She also tells Ned about the properties that her husband is involved in, the will he’s had drawn up which splits his estate between Matty and his niece Heather, and the sad fact that if she divorces Edmund she’ll get nothing because she signed a pre-nup. But as long as she and Ned are together, she says, nothing else matters.

Despite their efforts to be careful, Ned accidentally makes a pass at an old high school friend of Matty’s, Mary Ann Simpson (Kim Zimmer), because the two women look so similar. Later, Edmund arrives along with Heather (Carola McGuinness) for a surprise visit, and during the girl’s stay she sees Ned and Matty in a compromising position; the mistakes are piling up.

And finally, Ned runs into Matty and Edmund at an area restaurant. The three end up sharing dinner and at one point while Matty is away from the table, Edmund tells Ned about the type of man Matty dated before they married—the type who wasn’t willing to do whatever it took to get what he wanted. Ned says he “hates that kind of guy”—and that it’s a lot like him.

Soon after, Ned and Matty confirm that they’re going to kill Edmund and they begin to plan in earnest. She wants Ned to change the will, enabling Matty to collect it all rather than splitting it with Heather, but Ned tells her not to get greedy.

Midpoint: Ned establishes an alibi by checking into a Miami hotel, then drives back to the Walker estate where he kills Edmund. Ned takes the body to an abandoned building in which Edmund had a business interest, and destroys the building with an incendiary device from one of his shadier clients, Teddy Lewis (Mickey Rourke), to make it look like a botched arson job.

Bad Guys Close In: In the aftermath, Ned tells Matty they need to lay low. But then Ned is contacted by Edmund’s lawyer about a new will that Ned supposedly drew up on Edmund’s behalf, which was witnessed by Mary Ann Simpson. Unaware of the new will’s existence, Ned plays along to avoid suspicion. Still leaving half the estate to Heather, the new will is so poorly prepared it is declared null and void due to a violation of the rule against perpetuities. Because of the errors, Matty inherits the entire fortune.

Knowing well his weakness for women, Ned’s friends warn him not to get involved with Matty, who they believe is just a client at this point. But now, to cover his affair, he tells them he’s going to begin sleeping with her. In the course of doing their jobs, his friends uncover clues that look bad for Ned and soon they begin to suspect he was involved in Edmund’s death.

All Is Lost: Lowenstein warns Ned that someone kept calling his hotel room on the night in question but never got an answer, thereby weakening his alibi. Ned can’t help but question Matty’s loyalty. Has she been playing him all along?

Dark Night of the Soul: Teddy Lewis tells Ned that Matty came to him to learn how to rig a bomb to the opening of a door. When Matty calls Ned and tells him where to recover a piece of evidence they need to bury, a suspicious Ned goes to the boathouse late at night and sees through the window a long twisted wire attached to the door.

Break into Three: Armed with a gun and facing his own Dark Turn, Ned confronts Matty.

Finale: She continues to deny that she deliberately set him up and that she really loves him now. He tells her to prove it by going into the boathouse. She complies, heading toward the building. At the last second he tries to stop her, but it’s too late—the cabin explodes; she couldn’t possibly survive.

Or was this yet another trick? Now in prison, Ned tries to convince his friend Detective Grace that Matty is still alive, laying out for him a scenario in which the woman he knew as “Matty” was actually Mary Ann Simpson, who had an unsavory background and, in order to marry Edmund Walker and get his money, assumed the identity of Matty Tyler. The real Matty learned of this and played along, presumably in exchange for some of the money, but was then murdered and left in the boathouse. Had he been killed by entering the boathouse, the police would have closed the case; both suspects would have been found dead, and “Matty” would have gotten away clean with the money, which was never recovered.

Later, Ned manages to confirm his suspicions by tracking down Matty and Mary Ann’s old yearbook. Below the picture of the real Mary Ann—the woman Ned knew as “Matty” —is the inscription “Ambition? To be rich and live in an exotic land.”

Final Image: Mary Ann, our “Matty,” on the beach of a tropical island with a young man at her side. As he lifts an ice-filled drink from a tray beside her, he addresses her in his own language. “It is hot,” he says in English, when she doesn’t understand what he’s said. Mary Ann puts on her sunglasses and agrees, before the camera moves up to take in the tropical sky.

Do the Right Thing… Whatever That Is