Do the Right Thing… Whatever That Is 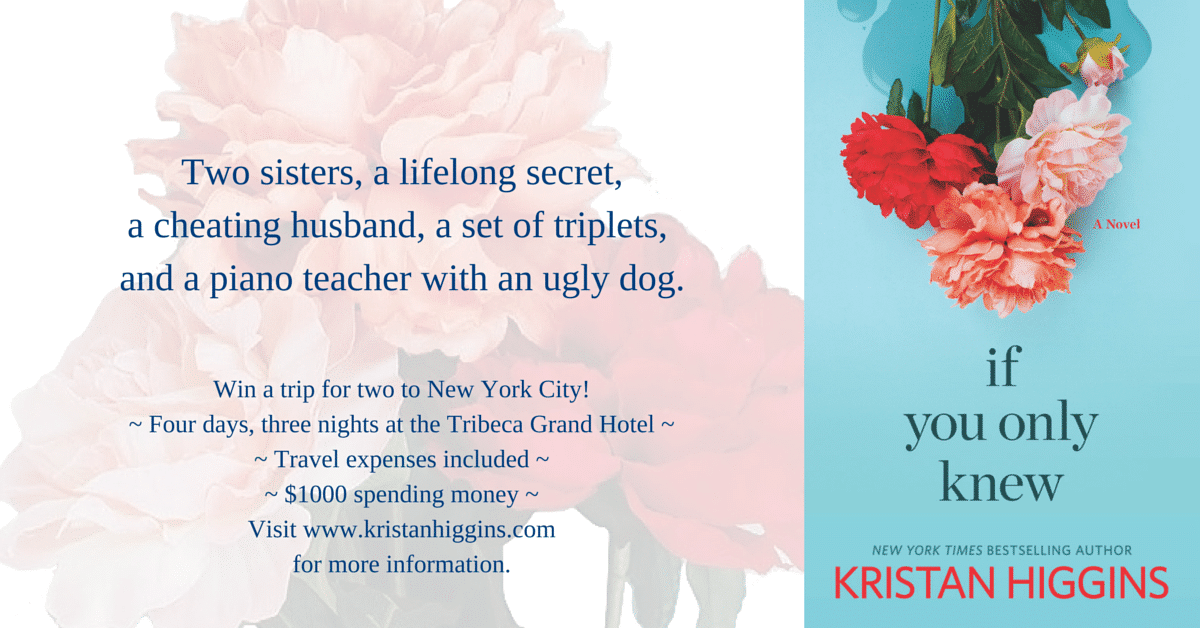 I think one of the best moments in a book or movie comes when the protagonist is frozen by indecision. He or she is at a critical point; some action must be taken, some major decision made. But the right path isn’t clear. To do one thing right means another aspect of the plot will suffer. Both choices are right. Both are also wrong.

If You Only Knew, my new novel, is about two sisters who are both struggling with that choice. Rachel, a happy wife and stay-at-home mom to triplet toddlers, finds out her husband may be having an affair. Does she believe him? Does she leave him? What about her daughters? What about their life, childhood, happiness, future? Let’s be honest: most of us wives say, “If he ever cheated on me, I’d cut off his…” (fill in the blank). Me, I live in the woods in a rural part of Connecticut. I’m quite sure my husband’s body would never be found. But the truth is, we don’t really know what we’d do until we’re in that situation, and then what seems so black or white turns gray.

Jenny, Rachel’s sister, has her own moment of wavering between two paths. At a turning point in the book, she’s torn between her lifelong desire to fix people and the knowledge that some things—and people—are beyond repair. Both impulses are right. Both are also wrong. To do one thing means another part of the story is going to suffer a serious set-back. To do nothing… the same.

The other day, I made my teenage children watch Air Force One, because though I think I’m a good mother, I had somehow neglected to force them to watch it prior to this week. There’s that wonderful moment when the President, who’s been so clever at evading the hijackers of his plane, has to do the right thing—and the wrong thing. He’s just made a speech in which he’s sworn never to negotiate with terrorists. Zero tolerance. It’s their turn to be afraid. ’Murica, baby!

And then the bad guy played by Gary Oldman holds a gun to the President’s daughter’s head. If President Marshall stands by his word, his daughter is dead. But if he lets his daughter live, a terrible dictator will be released from prison to continue his evil mission of genocide. Many more people will die, but little Alice won’t. Sure, Marshall is the leader of the free world, but in that moment, we see that he’s daddy first.

Air Force One is a little cheesy, because there aren’t any real consequences to Marshall’s decision to release the Evil Dictator. In Independence Day ( I seem to be fixated on presidents today), the President gives the go-ahead to launch a nuke to try to kill the aliens. Will it destroy them? Hopefully. Will it pollute the atmosphere and kill people from radiation poisoning? Er, yes. He goes ahead and launches. It doesn’t kill any aliens. Mission not accomplished. The movie doesn’t show people running into the streets with their skin peeling off, because it’s not that type of movie. But at least there’s the sense that this was a very bad move, even if the idea behind it was sound.

And, in keeping with my presidential theme, think of Morgan Freeman (who will always get my vote) in Deep Impact. There’s a meteor headed for Earth. Everyone will die, except those the President will save. If you’re not a scientist or great thinker, sorry, pal. You have not met the criteria for survival. This president knows it’s a horrible choice. But it really is the only one available.

I think the trick in the rock-and-a-hard-place moment is to make it convincing for the reader or viewer. We have to be able to really feel the character’s pain in making either choice, and we have to see the consequences of that choice being both right and wrong. The choice the character makes has to come from their best impulses, their best knowledge, but they also have to be prepared to live with the knowledge that there’s a downside to this decision.

In your writing, or in your reading and watching, have you come across any really great moments of right thing/wrong thing? I would love to hear about them. And I hope you’ll pick up a copy of If You Only Knew, which goes on sale August 25.

Save the Cat!® Podcast: Blake Snyder on Tootsie

Called “the queen of the summertime read with a little something more” by Library Journal, Kristan Higgins is the New York Times and USA TODAY bestselling author of 14 novels, which have sold millions of copies and have been translated into more than 20 languages. Her books have received high praise and starred reviews from The New York Times, Kirkus, Publishers Weekly, Library Journal, the New York Journal of Books, Booklist and Bookpage. She is a five-time nominee of the Kirkus Prize for best work of fiction. Visit her website at www.kristanhiggins.com.