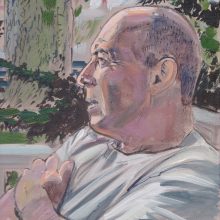 Ron Kasman still has the comics he bought as a child. You can currently see some of his Spider-Mans at the Royal Ontario Museum as part of the spider exhibit. Ron co-chaired Canada's first comic convention, Cosmicon, in 1972. Later, he wrote and drew William Lyon Mackenzie and the Rebellion of 1837 in Upper Canada, the first graphic novel based on Canadian History. It was widely circulated as part of an Ontario-wide literacy initiative. While working as a high school art teacher, he was published more than 85 times as a comic artist or writer. This year, he was nominated as the Best Cartoonist in Canada for his graphic novel, The Tower of the Comic Book Freaks. He lives in Toronto with his wife and daughter. Neither of his grown sons caught the comic bug. They tell people he is a portrait painter. And speaking of portraits: portrait of Ron Kasman by R.G. Taylor

How Save the Cat! Helped Me Sell a Graphic Novel

Blake Snyder’s books as a framework