How the Dragon Really Got Trained

DreamWorks Animation’s How to Train Your Dragon opened across the country on March 26. It was co-written and co-directed by Dean DeBlois. Variety’s review of the film states: “DreamWorks Animation tries a new tack, embracing sincerity over satire, with How to Train Your Dragon, a thrilling drama interspersed with amusing comedic elements (rather than the other way around) from Lilo and Stitch directors Chris Sanders and Dean DeBlois.  Dragon seems destined to become another cornerstone franchise.”

Dean just sent us this:

Not only did Blake consult on the movie, but I pushed for a dedication to him in the end credits. And it’s there, up on the big 3D screen!

Just a few weeks before he passed away, Blake, Jeremy Garelick, and Ben Frahm (Danny Goldberg, our other writer’s group member was away shooting) all came by to watch Dragon in- 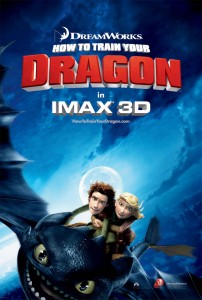 progress, and weigh in with notes and ideas. As always, Blake was beaming with enthusiasm and energy. He focused on a few structural elements that were muddied and gave us great ideas toward clarifying them. He absolutely made the film better.

In fact, Blake’s whole approach was used in structuring the story that Chris Sanders and I brought to the project when we took it over. We had just over a year to rewrite, storyboard, edit, animate, and light the entire film. A crazy undertaking — and time was of the essence being that the release date was immovable. Our task was to take the world of the source children’s book and broaden its audience by giving it a dynamic, fantasy adventure story that would deliver on the promise of the premise. Chris and I also saw an opportunity for strong emotional payoffs within its central relationships, so we made them our primary focus.

Our first step was to lay out our concept according to Blake’s Beat Sheet, and from there, we laid out the detailed structure. The Board became our foundation, and we never veered from it as we felt our way through the moments of the story. I’m a big believer in Blake’s approach because everything he teaches was proven true in the years of story work I did prior to reading Save the Cat! The theories he touches upon are undeniable, universal truths of human storytelling, and Blake did us all a huge and lasting favor by putting them in a digestible form that people can immediately use and rely upon.

I miss Blake a lot, but I keep him alive, in my own way, by carrying the torch through every story I work on. He won’t be forgotten.

"Save the Cat! Strikes Back" reviewed!

Up in the Air Beat Sheet