When Fear Is Primal, It’s Powerful – A Case Study of Doctor Who 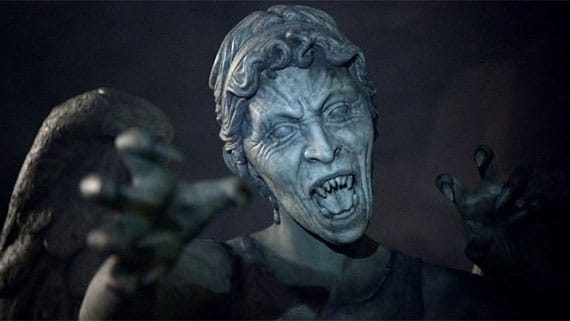 If you see an angel statue, don’t blink… or you might open your eyes to something more terrifying.

In Save the Cat!®, Blake Snyder wrote that for a story to be powerful and connect with the audience, it must be primal. “It’s because primal urges get our attention,” he wrote. “Survival, hunger, sex, protection of loved ones, fear of death grab us.” With Halloween approaching, it’s the perfect time to examine that primal urge that comes with fear.

Of course, this fear is approached in different ways. Many films focus on using elements of horror, featuring serial attackers who murder and maim in the middle of the night, complete with blood and gore. But it’s important to remember that while these antagonists might be frightening, to be truly scary, they should tap into our most primal fears. These basic fears center on the simple things we cannot escape or avoid in our lives. After all, when it comes to water, what could be more frightening than the knowledge that there could be a hungry shark, waiting in the deep for you to swim out a bit too far, as in Jaws?

In the past few years, the BBC television show Doctor Who has made a name for itself by preying on our most primal fears, using them to draw the viewers into the plot, creating intriguing storylines. When the show first began in 1963, the creators designed monsters that were intended to frighten the viewers, most often children. But as the age demographic has shifted, those creatures have given way to our most basic fears and insecurities, the primal-ness spanning ages and audiences.

Take, for example, the Vashta Nerada. Known alternately as the “piranhas of the air,” these miniscule creatures exist in swarms, often appearing as shadows. In fact, that’s one way they disguise themselves, by blending in with the victim’s shadow until it is time to devour their prey. The Vashta Nerada are cited as the primary reason beings have an irrational fear of the dark. Only it’s not irrational, because we all know that something dark and dangerous lurks there… waiting. So it’s only a matter of time until our own shadow could unknowingly be hiding them.

But there are other things that are just as primal as our fear of the dark. The Silence are a race of aliens that has existed on Earth since the discovery of fire and the wheel. In fact, they have been controlling every aspect of our existence without us knowing it because they have a special ability at their disposal: they are instantly able to erase themselves from our memory.

When an individual is looking at one of these aliens, he or she is horrified and fearful of what they are seeing. But the second they look away, they have forgotten about the incident. This is why we sometimes experience déjà vu, why we walk into a room but can’t remember why, why we hear creaking floorboards in an empty house, and why we sometimes have the feeling that someone or something is watching us… because in fact, something is. We just don’t know it.

There could be several of The Silence in the room with you right now, but unless you are looking directly at them, you have no way of realizing they are there.

The Weeping Angels take primal fear to a whole new level, infusing ordinary objects with a new sense of sinister intentions. We normally wouldn’t think of statues as something to be feared. Yet, if those statues were an ancient race of alien beings, capable of attacking us in the blink of an eye (literally), they become something far more frightening.

In the episode “Blink,” the Weeping Angels disguise themselves as stone statues when they are being looked at, and will remain stone… until someone blinks. At that moment, they can attack with lightning speed. The only way to protect yourself is to stare at them, keeping them locked in a state of being stone.

The episode “Listen” addresses a fear that almost everyone has had at one point, that there is something under the bed, waiting to grab your foot at night. The Doctor ponders how some creatures have evolved and adapted to being the best at what they are: the best at camouflaging themselves, the best at being the predator, or the best at defending themselves.

But, he posits, what if there were creatures who had evolved to be the best at hiding, never showing themselves? Could that be why you feel the hairs stand up on the back of your neck? Why you hear footsteps behind you that never seem to pass by? Or why you think you see something out of the corner of your eye? What if no one is every truly alone?

The episode “Last Christmas” introduced viewers to the Dream Crabs, creatures that are similar to the face-huggers in Alien. After these creatures attach themselves to the victim’s face, they put the individual into a dream-like state experiencing a false reality — while the predatory creatures feast on brain matter. The victim might be able to escape if he or she realizes they are experiencing a dream, but that also might cause the Dream Crab to fight back, adding layers to the dream, making it nearly impossible to escape this slow death.

All of these creatures are frightening because they prey on our collective primal fears. We are probably not afraid of strange alien creatures, but we can relate to the fear of the dark, or of being alone, or of hearing noises behind us, or of not being sure what is real and what is a dream. These primal fears are all so terrifying because we most likely have experienced them at one time or another.

The next time you want to tap into a primal urge, think about something you cannot possibly escape or live without… something that is tied to our existence. And then find a way to make it so horrifying that your audience will wish that they could live without it. Understanding how the writers of Doctor Who have frightened generations can help you become a better teller of tales of terror.

About the Beats, News, Novel Writing, Tips and Tactics

5 Reasons to Get Excited about Save the Cat!® Writes a Novel

How I Won the 2016 NYC Midnight Screenwriter's Challenge