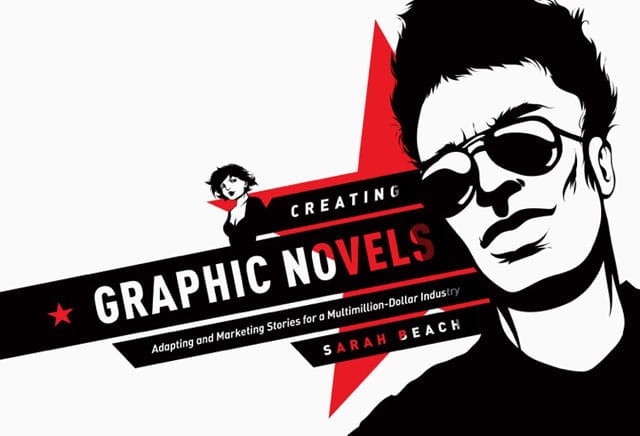 Our thanks to the irrepressible Sarah Beach, a friend of Blake and STC! Sarah worked many years as a researcher at Jeopardy, and wrote The Scribbler’s Guide to the Land of Myth, a book on mythic motifs for writers. You can visit the blog for that book or her more general website. But the big news is Sarah’s new book, Creating Graphic Novels: Adapting and Marketing Stories for a Multimillion-Dollar Industry, which Blake influenced. Read on!

Having the opportunity to write this guest blog for Save the Cat! is a special thing for me. I began planning the project that became Creating Graphic Novels back in early 2009. In fact, in February of that year, I met one-on-one with Blake to strategize. His genuine enthusiasm for other people’s projects was always such an encouragement. And I have to say that a good deal of the final book owes its voice to Blake. He shared my interest in storytelling in different media, how the form might change the way one approached the storytelling. And that was what this project was about: turning screenplays into graphic novels.

I had been hearing for several years about screenwriters who went into meetings with not-quite-mainstream scripts. Many of them would have good meetings, and then have the encounter close with a reluctant comment from the producer — something along the lines of “I wish there was a book or graphic novel of this, so I could see what the movie would be like.” One friend, in fact, had produced a spectacular 25-minute short of his project, a full on stand-alone story, as proof of concept — and yet he too got this line. Initially, he wasn’t sure what lay behind it.

About the same time, another friend had completed production of his independent horror thriller, and was considering also having a graphic novel made to help him in marketing his film. He wasn’t sure how to proceed, and he consulted with me, since he knew I also had a foot in the Comics business. I asked him what he meant to do. He planned to find a just-graduated art student, give the artist the film script and some screen shots from the film, and just go with that. I could only shake my head: this is not the way to do it.

That’s when I realized how much of a need there was for a book like Creating Graphic Novels. Many of the books currently available about writing comics or graphic novels repeat basic information about story structure, but don’t necessarily help someone who is new to the nuts-and-bolts of comic scripting. But to create a good graphic novel script, the writer needs to understand aspects that are unique to comics as opposed to those needed for film and television writing, such as writing for the page turn, or how to choose your cliffhangers if your story gets published as parts in a monthly format first.

Of course, to start out creating a graphic novel, you have to know your story the same way you would for a film script. Blake’s Beat Sheet remains one of my primary tools for shaping the structure in my storytelling (in fact, I used it to structure this blog post!). Once you know the shape of your story, you can start breaking it into the details you need for the comic script. Creating Graphic Novels goes into the details of this. The book also includes information on how you can find your art team, choices in how to get it published and distributed, even how to build your audience.

As I worked on the project, seeing it come together, I frequently heard Blake’s voice in my mind. “Writing should be fun!” I wanted to convey the information in my book that would continue that encouragement. Mainly because much of what a writer needs to know about making his or her graphic novel achieve success doesn’t have as much to do with the actual storytelling as it does with getting it to an audience. Because that is what lies behind the “Is there a book?” question from producers. Sure, seeing images may help them understand your fabulous space opera. But behind that, they want to know a very crucial thing: is there an audience for this? They don’t necessarily care whether it is a large audience or not, they just want to know that there is an audience. And in Comics (including graphic novels), it is often the writer that has to do the job of building the audience. This book helps plan those things.

Creating Graphic Novels combines prose text and graphic presentation to help anyone understand how the medium works. I even created a character to help with the explanations: Professor Exposition. I wanted a friendly fellow who would help the reader get through all the details. He turned out to be a bright, chipper character who reminds me in many ways of Blake himself. Because after all, the writer really should enjoy the writing, no matter what medium one works in.

The Best of Blake's Blogs: Where's the Irony?

Save the Cat!® Podcast: The Bad Guys Close In Beat of Nebraska