THE CAT SAVED ME: How Nine Lives the Movie Saved My Life 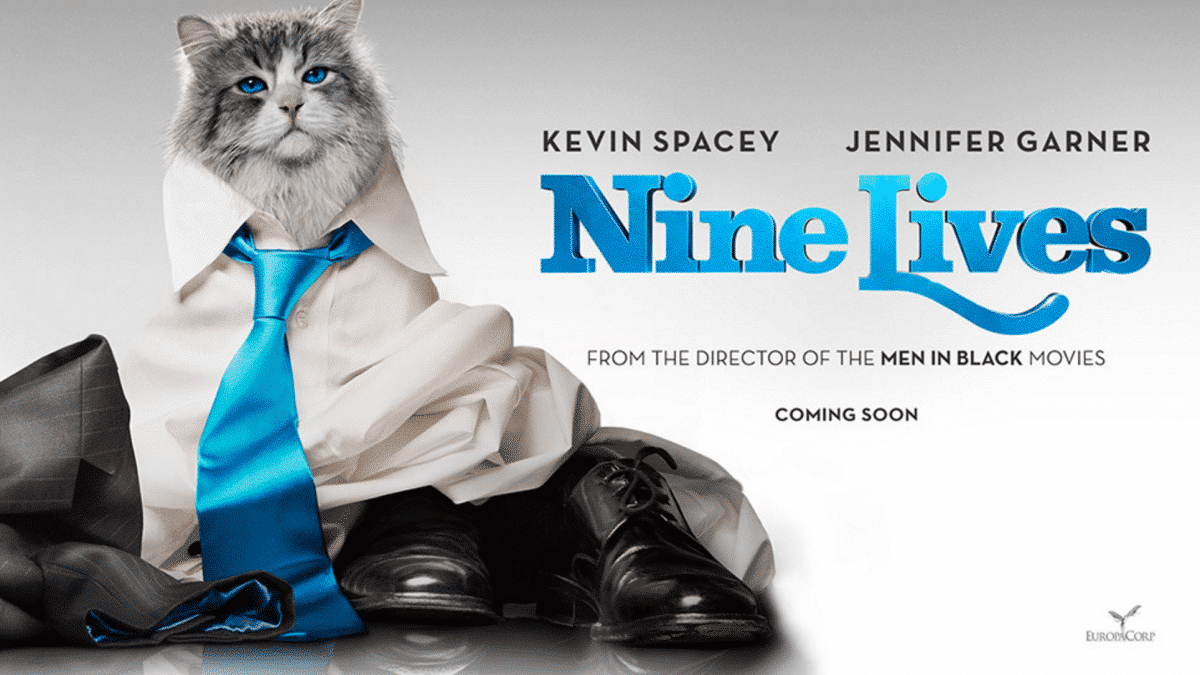 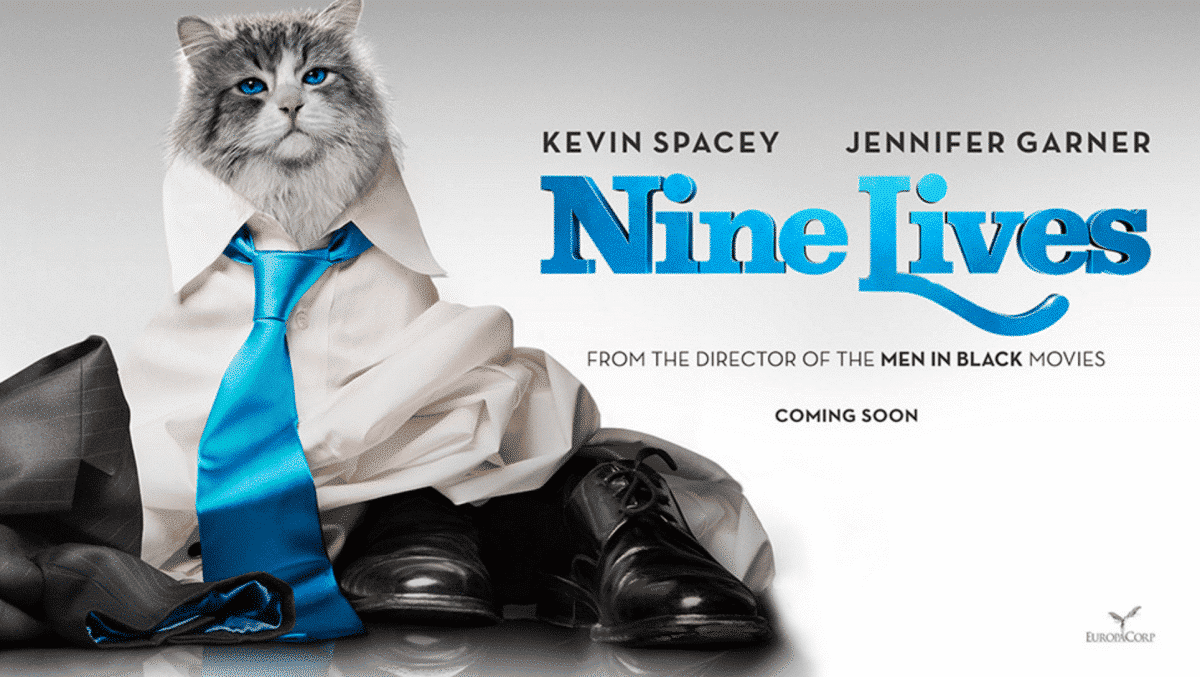 My writing partner, Caleb Wilson, and I jumped into this business when we sold our spec screenplay, Manchild, to New Line Cinema in 1999. After that, I quit my great job at ICM and Caleb quit his job at Brillstein/Grey to write full time.

In the years that followed, we sold several pitches and spec scripts, including Four Christmases. 1999 to 2007 was the golden age of the spec script and that’s how we made our living. It was great. Sure, you could only eat what you killed, but we managed to kill and eat quite a bit during this golden age.

Then, following the writer’s strike of 2007/2008, the golden age ended. Spec scripts and especially pitches rarely sold. The party was over. Caleb and I adjusted by picking up a few assignments here and there and even managed to sell a pitch or two in the aftermath, but the glory days of giant paychecks were over.

Now, when you write with a partner, the money disappears pretty quickly. For example, if you book a rewrite job for $100,000, that sounds pretty good, right?  But you have to cut that by 25% for commissions for your agent, manager, and lawyer. Now it’s $75, 000 — cut that in half because there are two of you, and now you’re down to $37,500. Now take at least 33% out for taxes. By the time the deal has closed, contracts have been signed, and you’ve turned in your draft it’s a year later and your take home is $20,000 — that’s it. That’s not a lot money, especially when you have a family and a mortgage (which I did).

So to make it at all, you really need to book four to five jobs a year, while you’re writing the jobs you’ve already booked. Long story short, you have to do a lot of killing to eat just a little bit of food.

Money aside, the greatest perk of being a WGA writer is the health insurance. It’s everything. But if you don’t kill enough, it can run out.

By the winter of 2012, Caleb and I were facing that reality. If we didn’t book another $200,000 within six months, we were going to run out of our health insurance.

That’s when we were approached by Christophe Lambert of Europacorp to write a movie about a business man and bad father who winds up in the body of a cat.

This was Christophe’s “pet project” (pun not intended), and he was very enthusiastic about his idea. At the time, he was adamant: this was “Not a children’s movie!” he insisted in his heavy French accent.

Christophe wanted us think of it as a “Woody Allen” film. We would not hear the cat’s thoughts. It was to be “introspective and sophisticated,” but at the same time, it still had to be about a man who turns into a cat. I’m not kidding.

Naturally, Caleb and I were apprehensive. How were we gonna write a “Woody Allen-ish” movie where you can’t even hear the thoughts of your protagonist for the bulk of the film? Was this even possible? The whole idea was insane.

That said, I could actually relate to it. When my father passed away in 2006, this stray cat showed up at our house a few weeks later and oddly shared some of my father’s mannerisms. The cat always seemed to snuggle up to my family when the subject of my father was discussed. I had this strange feeling that my father’s spirit was somehow inside this stray and we adopted him. I know that sounds weird, but it’s true. I’m weird. Sue me.

But the bigger motivator was that our health insurance was going to expire if we didn’t book a job soon. So, we pitched our version of the movie to Christophe, and he liked our take on his idea.

At the the end of the summer, we handed them our final draft. We did it!

In the time it took to close the deal and write the draft, Europacorp hired a new executive to run the Los Angeles office. Given the task we were assigned, Caleb and I were actually proud of the draft we wrote. That said, when we turned it in, the new executive asked us what it was about. “Well it’s an adult Woody Allen-ish comedy about a selfish business man that nearly dies and falls into a coma. While he’s in the hospital, his spirit gets put inside the body of a cat until he can redeem himself.”

“So, it’s a talking cat movie?” she queried.

“No. You never hear the cat talk, and we don’t even hear the man’s thoughts when he’s inside the cat.”

Needless to say, the new executive didn’t know what the fuck we were talking about or how to process how her boss got us to write this absurd film.

After reading it, she admitted that we did a great job, but it was still a talking cat movie without a talking cat. We  assumed the movie would probably never get made.

Okay, fair enough. But I had health insurance!

The week after we turned in the draft and were told they were not going to make the movie, I went to the doctor to discuss some headaches I was experiencing. A week later, I had to get an MRI “just to be sure.”

Later that night I got the call. “Mr. Allen, this is your doctor. We got your MRI results and you have a massive brain tumor in your cerebellum and you have to go to the hospital immediately.”

A brain tumor? A fucking brain tumor? Are you kidding? But she wasn’t kidding. I had to have emergency brain surgery two weeks later. Bone saw, and all. It was a $500,000 procedure.

A procedure that I never would be able to pay for, were it not for my WGA health insurance — that I only had because of Christophe Lambert and his crazy cat idea.  If I didn’t have the WGA insurance, I’d be dead. No question: dead.

The surgery went well. No cancer. I temporarily lost my vision, my balance, and my ability to taste anything. But after seven months of WGA insurance rehab, I got it all back! Not only that, I started writing like I was a bionic Steve Austin: Faster. Stronger. Better than ever before!

Shortly after I recouped, I received word that Europacorp hired two brilliant young writers named Ben Shiffren and Dan Antoniazzi to rewrite our cat script and give the cat a voice. Apparently, they convinced Christophe Lambert that the only way the movie would work is if we actually hear the cat’s thoughts. Thank you, Dan and Ben!

On top of that, the new draft was good enough to attract the talents of Barry Sonnenfeld, Kevin Spacey, Jennifer Garner, Cheryl Hines, Christopher Walken, Malina Weissman, Robbie Amell, and countless others! An amazing list of talent!

Christophe Lambert’s “pet project” that saved my life was now getting made and I was alive to see it.

When they finished the film earlier this year, I reached out to Mr. Lambert to thank him for giving us the job, and saving my life. Sadly, he never got a chance to respond. Christophe passed away in May.

So if and when you see Nine Lives, please know that actual lives were given and taken as a result of this film. True story.

Although Christophe died before his pet project got released, there is no doubt he gave me a second chance at life. I’ll never forget him for that. And now, when I come across a stray cat, I speak to it in a French accent and mention Woody Allen. You never know. Yeah, that sounds crazy, but leave me alone — I had a brain tumor!