Save the Cat! Goes to the Dark Side

Called “Hollywood’s hardest working filmmaker” by talk show host Casey Ryan, guest blogger Anne Lower has written and directed for the stage and screen; her plays have won awards in Los Angeles, Seattle, New York, Oklahoma City, and Denver. She has had screenplays reach finalist in the PAGE awards and the Sundance Table read. Anne’s web series, They Live Among Us, debuted last fall. She hopes the next installation of TLAU will be launched soon. She and her partner Geoff Reeves’ pilot, Interglobal Trading Fund, was greenlit and shot this fall, with a distribution deal in place through Red 5 Studios. Anne and Geoff are shopping an adventure/reality show, packaging a one-hour cable pilot, and have other various things in development. Anne blogs about life in Hollywood at Princess Scribe, recently named “Screenwriting Web Site of the Week” by SCRIPT Magazine. Her feature, EDEN, is slated for production in summer 2013. In her spare time, when she is not working out, playing with fast cars, or cooking up a storm, Anne can be found sleeping. Sometimes.

I’ve written before about the Save the Cat! moment: how it has been well-used, and how, it is oft misunderstood and abused… and how it can be a powerful addition to your screenwriter’s toolbox.

Halloween approaches, and naturally, my thoughts turn to things that go bump in the night. In keeping with the spirit of All Hallow’s Eve, I thought I’d explore another use for the Save the Cat! moment… and how Save the Cat! can save the villain.

“Preposterous!” you cry. “The Save the Cat! moment is one of unity between character and audience! It invites us into the world of the protagonist… it sets up a relationship in which we can relate to, identify with, or understand him or her. How on earth can this principle work for the Bad Guys???”

How, indeed. And yet, I believe that it does, for the Save the Cat! moment is like any other storytelling principle: once mastered, it becomes malleable. Of course, you must learn the form in its virgin incarnation, but once you have been able to organically understand and apply the technique, the storytelling world is your oyster to dine on.

This is not to say that the principle can be universally applied. Not all antagonists/villains have Save the Cat! moments. Characters such as the Terminator, Voldemort, Bruce the Shark, and Cruella de Ville are much more at home in their badness. Their characters are clearly defined; there are no shades of grey in their world. They are single-minded and determined in their wrath.

However, there are other characters, who, on occasion, startle us during their dark journeys. These are the Save the Cat! moments. They are there, I believe, for a variety of reasons. To lull us. To present us with moral dilemmas… and sometimes, to simply scare the hell out of us.

Let’s take a look, shall we? And perhaps you’ll come up with a few of your favorites along the way.  Spoiler alerts ahead!

A Tool of Empathy

Empathy is a great emotion to generate when dealing with a villain, for it immediately connects the audience with him or her. It humanizes them; it’s an “I’ve been there before” moment. It’s the cinematic equivalent of Medea, in that great moment of despair, before she succumbs to her rage. We’re there with her… until she crosses the threshold into darkness.

Think of The Caine Mutiny during Bligh’s cross-examination on the stand. The silver balls in his hand that he rolls around and around. Bligh’s steadfast determination to discover who stole the strawberries. This is a commander in distress – but there is no S.O.S. sent out. Bogart is in his acting prime; we watch as Bligh’s tenuous grasp on reality is gleefully chipped away by his accusers… and for this, our heart breaks for him, in spite of his dastardly deeds.

There’s been a gender war in play ever since Fatal Attraction burst onto the scene. Men loathe the character of Alex Forrest, the blonde vixen (masterfully played by Glenn Close), while women understand her, and often cheer for her – up to a point. We’ve all been there, girls. We meet a guy. He’s totally into us. A drink or two, sparks fly, and we wake up the next morning thinking WTF. He seems like a nice guy. One who genuinely cares… that is, until his wife comes back home.

I was watching the movie with a friend recently, and afterwards, we discovered that initially it was Alex we really cared for. She had the likeability factor; her only sin was to fall for a guy who was not being totally up front. She had us in her corner… until things began to fall apart. Setting up a meeting with is wife? Creepy. Acid on the car? The East German judge gave her a 9.5 for drama, but, girl, really. And then, the rabbit… and we switched our allegiances as quickly as a political candidate.

Let’s admit it. We love the bad guys. Sometimes, they are just plain fun to watch. Great writers know this – and they give these characters unforgettable dialog. That’s their Save the Cat! moment: wit.

We relish their wordplay, and as we do, we are lulled into forgetting just how dangerous these men and women can be. 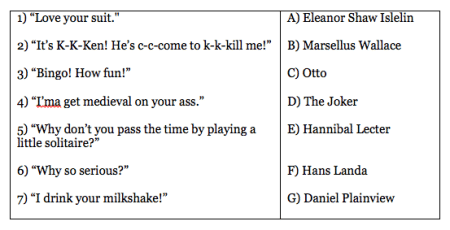 [See answers at the end of the blog.]

We love it when Lecter one-ups Doctor Chilton; we giggle with fearful glee as we watch him chase down dinner. Hans Landa claps his hands with childlike enthusiasm when he tops his strudel with sweet whipped cream. There’s something golden about a villain who truly loves his or her job. Their joie de vivre is infectious… until that moment in which the mask drops, and the Gorgon is revealed.

Go Ahead. Scare the Hell Out of Me.

“Some men just want to watch the world burn.” ~ The Dark Knight Rises

You know the type. They love their job. They are good at it. They do it because they think they are right. And usually, they are pretty damn good at what they do.

Anton Chigurh (Javier Bardem) from No Country for Old Men is one of the greatest archetypes of modern-day storytelling. He’s an angel of death, plodding relentlessly through the desert Southwest, holding a coin that determines life or death for those he encounters. The simple man in the gas station eludes death’s cold grasp by merely calling heads as the coin falls. Lady luck is not so kind to others.

Ed Norton’s portrayal of the altar boy Aaron in Primal Fear offers one of the most chilling forays into the mind of a killer… and none of it crystallizes until the final few lines. Initially, he falls under category 1: mentally ill, impoverished, a simple, sweet victim of abuse – or so we think. Like all great villains, Aaron has a mask – and he is very skilled at using it. At the end of the film, we realize that he murders because he enjoys every bloody moment of the act.

…and then we have Amon Goeth, the death camp commando with delusions of grandeur. He’s a terrifying presence; I’d rather do battle with Orks than with Amon. What makes him so frightening? He, like Nurse Ratchett, truly believes in his job. He thinks himself noble for what he does; he sees himself as a god, pausing occasionally to bestow mercy – or not – on those around him. He is mercurial; like Caligula, he is in a seat of power and grows drunk on it. He might not be a vampire, or a vengeful wraith, but his soul is seated in the depths of hell. If he were to glance your way, your flesh would turn to goose-pimples, and you would need to look away. His acts of mercy are STC! moments – but not to endear us to him, but to drive home the message of just how deadly this man is.

So, les chats, there are a few more examples of Save the Cat! at play. Think on it – for your antagonist to be truly effective, you must spend as much, if not more, time on him/her as you do your protagonist. Your antagonist must be a worthy opponent; your audience must fear that s/he will win. Pull out all your tools – and all stops. Build them well – and let them play.

Just make certain you keep them under lock and key when you have retired in the evening. You wouldn’t want them running out on the streets late at night, would you?

3 Indie Tips from Jennifer Zhang, Writer/Producer of Dead Inside

What Color Is Your Cat?