Dying Is Easy. Comedy Is Hard.

Kumail Nanjiani and Zoe Kazan in The Big Sick

I’ve seen all the Oscar®-nominated movies, so why does the Academy hate comedy? The Big Sick, The Disaster Artist, and I, Tonya were all better films with more to say about the human condition than snoozefests Dunkirk and Phantom Thread. But these comedies are in good company. Some Like It Hot, The Palm Beach Story, Groundhog Day, Bringing Up Baby, Ghostbusters, Harold and Maude, In Bruges, and Modern Times (etc. etc.) weren’t nominated for Best Picture.

The treacly and mediocre 9/11 drama Extremely Loud and Incredibly Close earned a Best Picture nomination in 2012, a year that the brilliant Bridesmaids was shut out of the running. Quick reality check: which movie would you rather watch right now?

Clearly, being recognized by the Academy is often more about “important” subject matter. The Oscars are predictable this way. Wanna win the office Oscar pool? At a loss when looking at the list of documentary shorts? Always go with the Holocaust movie. If a comedy were to sneak onto the list, it’d be a sure loser.

Life, I guess, is serious and so a film must be serious to win an Oscar — even though, as we all know, real life has big laughs even in the most dire and conflict-filled moments. But the Oscars aren’t real life. If you want to have a crack at an Oscar trophy for Best Picture with a funny movie, I recommend you kill off a main character like in Terms of Endearment (1983) — which, by the way, is a long time to reach back for an example of a comedy actually winning the award. Maybe if the writers of The Big Sick had killed off the heroine, they’d be gripping a Best Picture Oscar on March 4 (though they could still win for Best Screenplay – but don’t count on it).

Sometimes it’s enough to act serious. How serious is dress making? If you treat it seriously, then you’ve got a winner. If Phantom Thread (or Call Me By Your Name for that matter) had a couple laughs in it, it’s possible it would have been deemed less “important” and not considered as a Best Picture contender. Take, for example, another — I would argue better — film that takes fashion seriously, The Devil Wears Prada. Edit out all the laughs and it may have had a shot at a nomination, but clearly it was too funny to be considered Oscar-worthy.

So what’s going to win Best Picture this year? Pick the film with the fewest laughs. 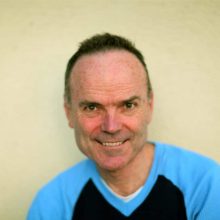 Steve Tatham is a former Walt Disney Imagineer and currently the Vice President of Creative at Universal Studios Japan, where he uses every streaming service known to mankind to keep caught up on his movie watching from Osaka, where he lives with his wife, two kids and dog. He is the author of two published books and has appeared for more than 20 years on stage and screen as a stand-up comic.