It’s always both fun and a learning experience when author Marilyn Brant is our guest blogger: If you stroll through the childhoods and young adulthoods of future writers, you’ll always find a unique set of novels and/or films that left a particularly strong mark. Stories that influenced the very worldview of that writer-to-be by stamping it with an indelible impression of skillfully paced plots, believable motivations, insightful characterizations, clever subtexts, and compelling themes.

We all have our own private shelves—literally or figuratively—that feature these memorable examples of storytelling. Forevermore, we hold up their masterful narration as our personal standard of excellence. The one we hope to rise closer to… someday. If we practice really hard. And if the writing gods smile upon us, even slightly.

This month, the worlds of both classic lit and genre fiction unite in honoring Jane Austen, an author who is one of my greatest literary influences. Her second published novel—that work of staggering genius we know as Pride and Prejudice—turns 200 years old on January 28th. For me, it’s a double celebration. I was, admittedly, under the influence of Austen and her comedy of manners when I wrote my debut novel, According to Jane (Kensington Books, 2009). It’s a romantic women’s fiction story about a woman who has the ghost of Jane Austen in her head giving her dating advice for two decades. Some called the book “highly imaginative.” Others called it “weirdly psychotic.” (I’m kinda biased, so I’ll let you decide.)

Now, four years later, I’m celebrating the release of my seventh novel, Pride, Prejudice and the Perfect Match, which is the first book since my debut to give such an obvious nod to my literary idol. This story is a contemporary romance about an ER doctor and a single mom who cross paths on an Internet dating site. Both have motives aside from meeting their “love match,” and both think they’ll be able to get what they want—fast, easy, and without endangering their hearts. We all know, though, that the course of true love (or carefully plotted fiction) will never run that smoothly…

Miss Austen did not have the benefit of Blake’s beat sheet at her writing desk, like I did when I drafted my novels, but that doesn’t mean her work didn’t exemplify the same brilliant storytelling techniques Blake so clearly illuminated for us. In honor of them both, here is my best attempt at writing out a beat sheet for Pride and Prejudice:

1. Opening Image: Mrs. Bennet, a Regency-era mother to five single daughters (Jane, Elizabeth, Mary, Kitty, and Lydia, in order of age), is yammering on and on to her husband about how a new eligible and wealthy bachelor just moved into the neighborhood.

2. Theme Stated: C’mon you British lit buffs—or fans of Colin Firth—say this one with me: “It is a truth universally acknowledged that a single man in possession of a good fortune must be in want of a wife.” (Imparted to readers with a heavy dose of irony.)

3. Set-Up: We get to know the Bennet clan, particularly sweet/beautiful Jane and witty/opinionated Elizabeth, as they interact as a family and go to the Meryton Ball—the first of the major balls in the novel. (Really, don’t read this book if you can’t abide dancing.) We then encounter the object of Mrs. Bennet’s interest, Mr. Charles Bingley, who is in attendance with his snobbish sister Caroline, his other snobbish sister and her husband and, most interestingly of all, his best friend. Enter the even wealthier and handsomer—albeit, significantly prouder and more arrogant—Mr. Darcy. Despite how literary convention might expect us to think that Bingley’s romance with Jane should be the primary one in the novel, it is not. We get to contrast “pride” and “prejudice” in action as Bingley’s best friend Darcy and Jane’s dear sister Elizabeth meet.

4. Catalyst: Darcy scoffs at the idea of dancing with Elizabeth, no matter how fervently his good-natured buddy implores him to do so. He growls that she’s “tolerable” but not handsome enough to tempt him. Elizabeth overhears this conversation, and you can imagine how well that goes over with her. Her true character, though intelligent and, at heart, quite loving, is one of a woman with a LONG and exacting memory. And Darcy, who spoke in haste and out of irritation at being in unfamiliar circumstances alongside people with whom he didn’t share many interests, would live to regret his uncharitable words.

5. Debate: Others may disagree with me on this point (so feel free to counter), but I’d argue that the A Story is all about Mrs. Bennet wanting to marry off her daughters and the debate here is a series of discussions from the perspectives of multiple characters regarding the nature of courtship and marriage. To Mrs. Bennet, it’s all about money and luxurious living. To Charlotte (Elizabeth’s best friend), it’s about finding a respectable man and comfortable home. To Jane, it’s love and kindness. To young silly sisters Kitty and Lydia, it’s handsome officers. Elizabeth requires something more in a spouse—intellectual respect—while Bingley and Darcy debate the qualities they admire: pleasant manners and attractiveness (Bingley) versus being clever and accomplished (Darcy). And for the Bennets’ relative, Mr. Collins, it’s finding a woman his patron, Lady Catherine (Darcy’s rich and obnoxious aunt, no less!), would approve of, given his standing in the church. Everyone argues their positions.

6. Break into Two: Elizabeth’s romance with Darcy really begins (and not well). She makes a choice to visit Jane, who has fallen ill during a lunch date with Bingley’s snobbish sisters, and she must brave the irritations of Darcy and Caroline in order to give comfort to her dearest sister.

7. B Story: In spite of himself, this is where Darcy really starts to like Elizabeth—particularly her fine eyes and her liveliness of mind. It’s also where her dislike of him is even more firmly cemented.

8. Fun and Games: Oh, there are evening balls and many witty remarks, plus the appearance of new people on the scene and much dating/courtship action. The promise of the premise is in full swing here with marriage proposals, sudden departures, rampant social gossip, and rakish men. Mr. Collins proposes to Elizabeth. She refuses, so he proposes to her friend Charlotte, who impulsively accepts. Mr. Darcy and the Bingley sisters persuade Mr. Bingley to leave town, and Jane, in hopes of crossing paths with him again, leaves as well to stay with relatives in London. Elizabeth, who has already met the cunning but charming officer Mr. Wickham (also the son of Darcy’s late father’s steward—follow that?), begins to learn of even more horrible deeds that Wickham has attributed to Darcy. She readily believes them.

9. Midpoint: Elizabeth takes a trip to visit her friend Charlotte, now married to the foolish Mr. Collins, and encounters the formidable and frequently rude Lady Catherine. Since the Lady is Darcy aunt, it’s not so implausible that Darcy suddenly shows up there, too. It is, however, a shock to all of us when Darcy unexpectedly proposes to Elizabeth (badly). Less of a shock is that she immediately refuses him, citing his interference in her sister’s romance with Bingley and his nastiness to “poor Mr. Wickham.” Let’s just say, none of this is how Darcy imagined things would play out. He storms off and writes a long letter to Elizabeth, explaining that Wickham is a really bad guy. Both Elizabeth and Darcy have been prideful and prejudiced in a number of ways, and the state of both of their love lives seems pretty pathetic right about now.

10. Bad Guys Close In: This is where the plot thickens. The officers of the regiment, including Mr. Wickham, leave the area for another town. Youngest sister Lydia gets an invitation to go there with a friend and her father lets her go, against Elizabeth’s advice. Elizabeth, meanwhile, gets to take a new trip—this one with her sensible aunt and uncle from London. They head north to the region of Derbyshire, where her aunt grew up and, coincidentally, where Darcy’s famous estate of Pemberley is located.

11. All Is Lost: GASP! Darcy is THERE in Derbyshire, too! After some months apart, during which he has regretted his ungentlemanly behavior and she has regretted believing Wickham’s lies, the two see each other for the first time, mutually humbled and with much clearer vision. They talk and are on the verge of something very courtship like when disaster strikes. Jane writes a letter saying that Lydia has run away with Wickham and the two cannot be found.

12. Dark Night of the Soul: Elizabeth must return home, knowing that Lydia’s actions will forever tarnish the reputation of her family and that Darcy wouldn’t want anything to do with her now. Because of his earlier warnings about Wickham, she confesses to him what has happened with her youngest sister and, basically, says goodbye to him. She knows any further relationship between them is hopeless. It’s heartbreaking. Just when both she and Darcy had finally escaped their pride/prejudice toward each other, they are torn apart.

13. Break into Three: At home, Elizabeth consoles her mother and her sisters while her father is in London attempting to locate Lydia and hoping to convince Wickham to marry her, rather than leave her a “ruined” woman. Elizabeth, fully understanding now that Darcy was telling her the truth about Wickham’s character, is more stunned than anyone when they all find out that Lydia and Wickham are engaged and about to get married. It is a terrible match, but it is the only thing that can be done to save the family’s reputation. Mrs. Bennet is ecstatic to finally have one daughter married, even under these circumstances.

14. Finale: Wickham and Lydia visit the Bennets as a married couple. Elizabeth is wiser now and distances herself from Wickham and his Darcy-bashing speeches. Lydia lets a secret slip—Darcy was with them in London—which makes Elizabeth crazy with curiosity. She begins to investigate. Meanwhile, Bingley suddenly returns, seeks out Jane and, eventually, proposes. Jane says yes. Lady Catherine surprises Elizabeth with a visit, demanding that she stop pursuing Darcy. Elizabeth is seriously confused. She hasn’t seen Darcy in a while and, though she respects him now, she’s quite sure she’s not secretly engaged to him. Nevertheless, she tells off his aunt with her best Regency-era insults, and is further stunned when Darcy himself shows up soon afterward. Elizabeth has learned that HE was the one who found Lydia and paid Wickham off to marry her. When Darcy proposes a second time, Elizabeth accepts with pleasure.

15: Final Image: We have the weddings of the “two most deserving” Bennet daughters. With three out of the five young ladies now married, Mrs. Bennet is beside herself with delight. And it’s a happily ever after ending for those characters who have earned it.

So, for all of my fellow P&P fans out there, how did I do? Would you change anything? And, for everyone, what are some of the books or films from your youth that most influenced your writing? Wishing you all a wonderful 2013!

From the Best of Blake's Blogs: Watch Your Words 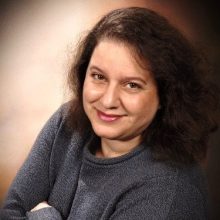