Our thanks to Master Cat! Ben Frahm for this grand slam of a beat sheet for the film that’s been nominated for 6 Oscars, including “Writing – Adapted Screenplay.”

1. Opening Image:
— Recorded footage of a play-off game. Oakland Athletics are playing the New York Yankees. They lose.
— Yankees pay their players a lot more than the Athletics.

2. Theme Stated:
— A title card appears: “It’s unbelievable how much you don’t know about the game you’ve been playing all your life.” – Mickey Mantle.

3. Set-Up:
— Billy Beane refuses to watch the play-off game. He never watches the games.
— The Athletics lose. Billy is pissed.
— He’s their GM (General Manager) and he’s tired of losing.
— Billy asks the owner of the Athletics for more money. They can’t compete unless they have more money. The owner tells him to get lost.
— Billy tells the scouts they can’t be competitive without more money. He says they have to start “thinking differently.”
— FLASHBACK: to a young Billy Beane. Playing baseball. He’s just been recruited. He’s going pro. Has a very bright future ahead of him. 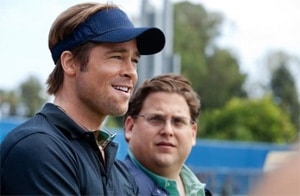 4. Catalyst:
— (Back to present): Billy takes a meeting with the GM of the Cleveland Indians. He tries to get one of their players. The GM balks at the deal, per the advice of Peter Brand. Peter must know something that Billy doesn’t.
— After the meeting, Billy talks with Peter. What’s his secret? What does he do for the Indians’ GM? Who is he?
— Peter explains that he manages, trades, scouts players by statistics and numbers. This intrigues Billy.

5. Debate:
— How will Billy react?
— Is this the “new way of thinking” that Billy has been looking for?
— Can Peter make a difference if he worked for Billy?
— This keeps Billy up at night, until finally, he decides to…

6. Break into Two:
— Hire Peter Brand. Billy hires Peter as his new right-hand guy. Together, they will start to change the Athletics.

7. B Story:
— Billy picks up his daughter for a visit. We learn he’s divorced. And is somewhat of an absent father to his daughter. They go guitar shopping.

8. Fun and Games:
— Peter and Billy start to put together a new team using purely statistically information. By the numbers. This is the essence of “Moneyball Theory.”
— The manager, Art Howe, doesn’t like this new way of thinking. He won’t go along with it.
— Billy says he doesn’t care. He’ll go over the manager. And the scouts. He doesn’t care. Things will start changing now.
— Billy goes to recruit his first player. A down-and-out player (Hatteberg) who just had elbow surgery. Billy tells him he’s on the team… as long as he plays first base. He’s no longer a catcher, according to their Moneyball Theory. He’s hired.
— FLASHBACK: again, to a young Billy Beane. We learn that he never succeeded as a player. And this is what drives him so much now to win.
— (Back to present): Spring training begins. Everyone is convinced they will fail.
— Hatteberg, the catcher turned first baseman, is by far the worst. Howe has his concerns. Billy won’t listen.
— The season starts. And as predicted, the team is horrible. Really, really horrible.
— Howe won’t completely listen to Billy. He won’t play Hatteberg at first, among other moves.
— People are having their doubts about the Moneyball Theory. Radio sports jocks critique the theory, saying it will never work. It was a mathematical theory created by a no-name janitor working at a factory, years ago. It’s all a joke. Billy Beane will fail.
— Even Billy’s daughter has her fears. She worries about her father.
— Billy won’t back down. He confronts Howe. And demands that he play Hatteberg at first base. This is a pivotal move that will help the team win. The manager refuses.
— Billy gives a pep talk to the team. He talks about losing. He motivates them.
— Billy makes a few player trades. Gets rid of Giambi. This helps the moral of the clubhouse and also instills fear. And now Howe only has one choice for first baseman… Hatteberg.
— This changes the dynamic of the team.
— The players start to work together.
— Billy and Peter make some more trades.
— And the Athletics start winning.

9. Midpoint:
— The Athletics begin an unprecedented winning streak.
— It appears the Moneyball Theory is working.
— And for the first time, Billy watches a game in person. We know from the beginning he used to never do this out of fear. But he’s changed.

10. Bad Guys Close In:
— At the 20 game mark (which would be the longest winning streak on record) the team starts to falter. Billy witnesses this. And it triggers issues of loss in Billy’s past.
— FLASHBACK: Billy starts replaying his failures as a former player. Billy considers himself a failure in life.
— (Back to present): The Athletics pull off the victory and everyone celebrates.
— However…

11. All Is Lost:
— Billy’s still not satisfied. It’s not a World Series championship. It doesn’t mean anything.
— In the playoffs, the Athletics lose. Turns out the Moneyball Theory is a numbers game that projects long term, not for a single game or a short series.
— With the loss, Billy is devastated.

12. Dark Night of the Soul:
— Billy feels like a failure again.
— Billy looks at pictures of him as a kid playing baseball. Nothing’s changed in his life. Or at least, that’s how he feels.
— And then he gets a phone call. 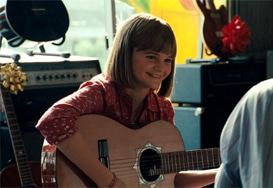 14. Finale:
— The Boston Red Sox offer Billy the largest salary ever for a GM. He’s offered 12 million to be the GM for Boston.
— But Billy says no. He doesn’t need this to feel like a success. This is Billy’s final test. And he decides to…
— Return to Oakland and be close to his daughter.
— Billy will return as the Athletics GM along with Peter.
— Peter tells Billy a story about success and failure. And we know that finally Billy feels like a success.

15. Final Image:
— Billy is driving in his truck. He listens to a cassette that his daughter made for him. She’s singing a song. She’s confident. And she’s happy that her father’s staying in town.

FADE OUT.
THE END.

Beat Sheets for other nominees: The Help, Midnight in Paris

Using the Blake Snyder Beat Sheet in the Classroom