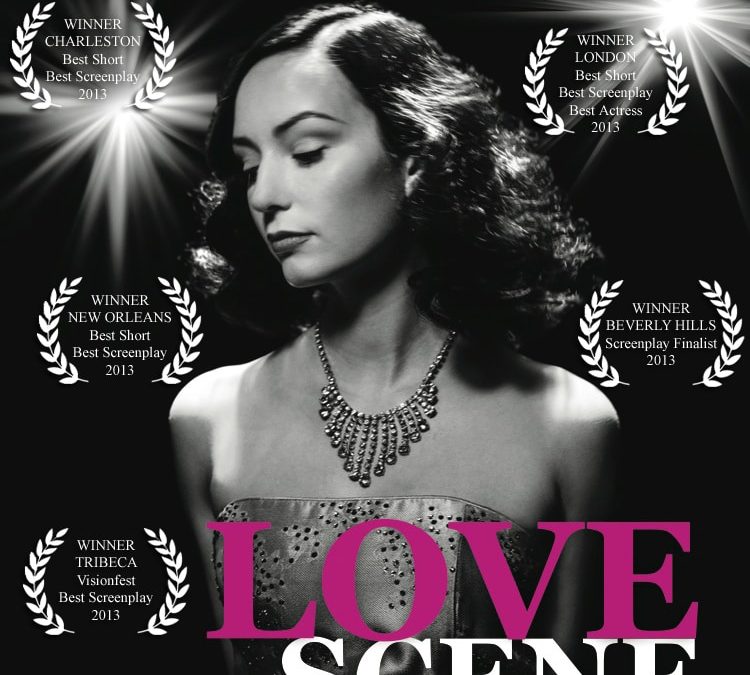 Our thanks to Master Cat! Geoff Harris for this breakdown of the intoxicating 8-minute film that’s piling up well-deserved awards, including Best Short, Best Screenplay, and Best Actress from the 2013 London International Film Festival. And be sure to note the link and password that will allow you to screen the film at the bottom of this blog!

I had to see the short film, Love Scene, for myself. In it, my daughter Caitlin portrays movie star Vivien Leigh. And to look like the actress — best known for her role as Scarlett O’Hara in Gone with the Wind — she had to wear green contact lenses, dye her hair black, and speak in a slight British accent.

When I saw the film, I was blown away. (And this isn’t just a proud papa talking.) Caitlin had been transformed into Vivien Leigh, who was taking her screen test in 1935 London. But what surprised me as much as the acting and the look of the film was the writing. It was stellar — playful, tragic, and alluring. Love Scene was a mini-movie in eight minutes. In what was essentially one scene — only  seven-and-a-half pages long — there was a three-act structure, with a clear beginning, middle, and end. It was if writer/director Bethany Ashton Wolf had channeled Blake Snyder and his 15 Story Beats while writing her short film.

On this website, a couple of years ago, I blogged about using the STC! Story Beats — originally conceived for feature film writing — to structure a TV pilot. And, in another blog on this site, I wrote about how a fiction writer could employ those same beats when writing a novel. This got me to thinking: perhaps the Story Beats could also work in a short film.

I watched the short film again and again (hey, it’s only a little more than eight minutes long!) and even read its script several times (hey, it’s only seven-and-a-half pages long!), and my supposition was correct: Love Scene hits STC! Story Beats. From this one example, we could extrapolate that the Beats could be applied to short films in general in order to make their stories resonate.

Wolf made the film to raise interest and backing for the full-length screenplay she wrote that chronicles the 25-year love affair of Vivien Leigh and Laurence Olivier and is based on the book Vivien: The Life of Vivien Leigh by Alexander Walker.

(Note: Before I break down the short into its Story Beats, it should be mentioned that there was no B Story in this short film [Editor: Some commentators have discovered a B Story; see the Comments below], and the Fun and Games beat occurred much earlier than usual.)

Logline: In 1935, a relatively unknown actress takes her first screen test in front of a renowned British film director, only to reveal her need for true love with a famous actor who, tragically, is already married.

Opening Image: Through a Camera Lens, a blonde actress twirling for the camera at a screen test comes into focus. A similar image – blurred that comes into focus – is repeated when main character Vivien Leigh is introduced, signifying the blurred line between art and real life.

Set-Up: Vivien states her situation at home: she’s married to a barrister and, together, they have a daughter who just turned three years old.

Theme Stated: Vivien remarks what she needs: true love with the man she’s supposed to be with… famous actor Laurence Olivier.

Catalyst: Director Basil Dean points out that Olivier and Vivien are married to other people.

Debate: Vivien argues that Olivier and she are meant to be together, that it’s (to use an STC! term) a “journey” she should go on.

Break into Two: Vivien’s goal is to be with Olivier.

Fun and Games: Vivien moves out of her Act One world by calling out Basil for drinking during her screen test and she asks for a dry martini.

Midpoint: Vivien argues that she and Olivier should be together because their love is similar to the love of such Shakespeare characters as Hamlet and Ophelia, Romeo and Juliet, and Antony and Cleopatra.

Bad Guys Close In: Basil points out that Vivien has compared her love for Olivier with Shakespeare’s tragedies.

All Is Lost: Basil’s remark has cut Vivien to the quick. She stands in silence for a brief moment.

Dark Night of the Soul: Vivien agrees with Basil that she and Oliver are “…star-crossed lovers ‘til the end of time.” Tears roll down her cheeks.

Break into Three: Basil wonders if Vivien is acting right now or telling the truth.

Finale: Vivien asks Basil which answer will get her the part.

Final Image (not counting the tag under the closing credits): A close-up of Vivien through the Camera Lens – clearly in focus.

You can watch the short film by selecting this link and using the password: elephantwalk.

How to Market Your Script - Part Two