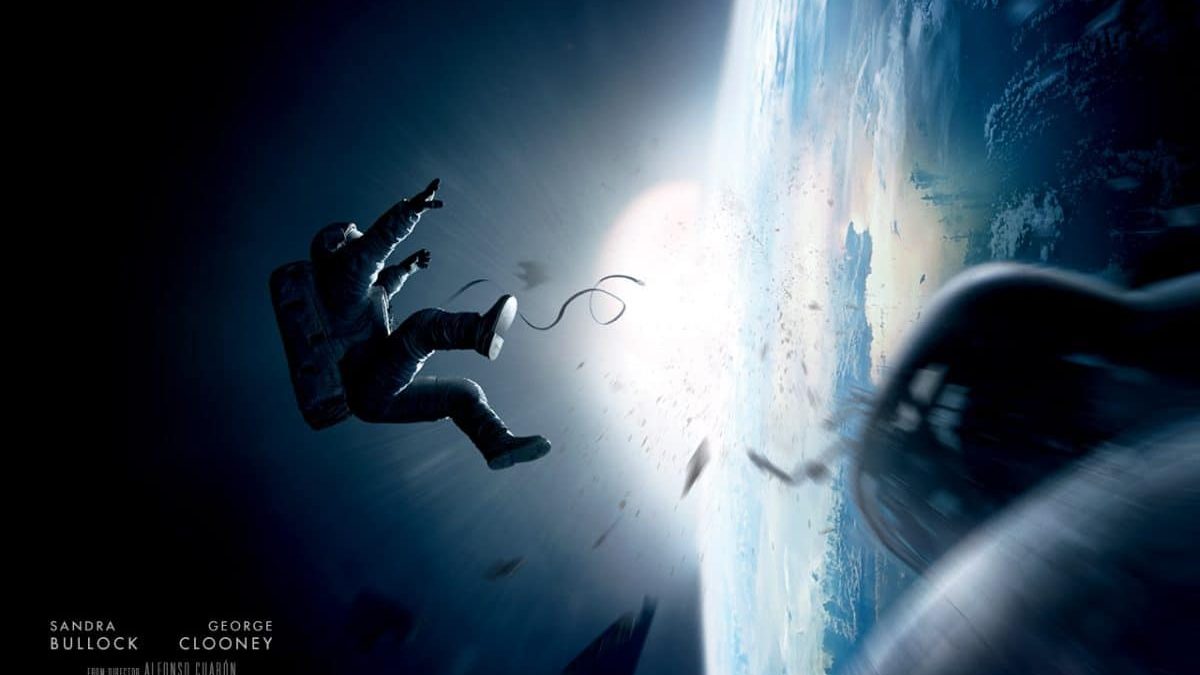 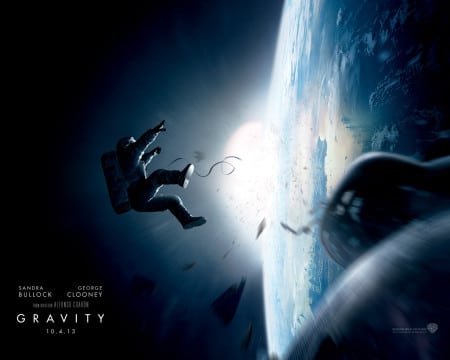 Thanks to Master Cat! Ben Frahm for this weighty breakdown.

Opening Image:
— BEEPING sounds. And then we open up on a breathtaking image of earth from space (only enhanced by 3D technology).

Set-Up:
— We meet MATT KOWALSKI (George Clooney). He’s a fearless and charismatic veteran astronaut, who enjoys talking about ex-girlfriends and why they all seem to slip away.
— Matt is currently on a mission with a fellow scientist and medical engineer. Her name is RYAN STONE (Sandra Bullock). And she’s brilliant, though nervous about her first mission in space.
— Ryan has been hired to install a new state-of-the-art scanning device (that she invented through her medical studies). Ryan is currently fixing and installing this device on a Hubble Space Telescope.
— Mission Control in Houston (voice: Ed Harris) radios in and warns Matt and Ryan of some possible debris that might be coming their way.
— A Russian missile strike on a defunct satellite has caused a chain reaction, which formed a cloud of space debris. This debris could very well be heading straight towards Matt and Ryan, and Mission Control advises them to abort their mission.
— Ryan doesn’t want to abort. She has come all this way to install her new device and doesn’t want to quit now. However, Matt shows more concern. He realizes this is not an everyday dilemma and could turn into a big problem. Matt orders Ryan to stop installing the device.

Theme Stated:
— “You’ve got to learn to let go. Learn how to let go…” is advice that Matt keeps offering Ryan throughout their journey and struggles in space. These words not only speak to Ryan’s current predicament of being stuck in space but also comment on her emotional backstory and journey, as she must learn to ultimately let go of her previous problems and grow to be a better, stronger person.

Catalyst:
— The cloud of debris strikes the Explorer.
— Ryan’s character goes spinning and is separated from Matt.
— The debris instantly kills a third ASTRONAUT, who we don’t really get to know.

Debate:
— Ryan gets launched when the debris hits, spinning out of control. She appears to be lost is space, totally removed from the space shuttle and Explorer. What will happen to her? Is she going to drift off into space and never survive her first mission?
— Where is Matt? Has he survived? Or was he killed just like the Third Astronaut.
— Ryan’s oxygen tank is on low. She doesn’t have much time and we’re not sure if she has the skills and knowledge to find her way back to the Explorer.
— Ryan is hyperventilating. She’s overcome by emotion and adrenaline. She doesn’t know what to do or where she currently is… and we fear that this mission might end early and tragically, when…
— Matt Kowalski appears! He latches onto Ryan and pulls her to safety. Matt tells Ryan that they must work together and return to the Explorer Shuttle to see if there’s a way back. Matt and Ryan must work together.
— However, it is Ryan’s ultimate decision to accept this mission and do everything in her power to help them survive…

Break into Two:
— Ryan accepts the mission. She will work with Matt to return to the Explorer and do whatever it takes to return home safely. This becomes the A Story of the film.
— Matt and Ryan begin their journey back to the Shuttle. Ryan’s oxygen tank continues to run low and they know they don’t have much time. Anxiety runs high and in order to calm Ryan, Matt uses some veteran Astronaut small talk techniques…

B Story:
— Ryan and Matt’s relationship becomes the B Story.
— Matt and Ryan’s discussion of relationships, family, personal life, and the potential for romantic happenings between the two of them will serve that Story.
— Matt will ultimately help Ryan learn the theme of our move… “Learn to let go…” and Ryan will for once open up emotionally as a character and overcome her crippling backstory.
— Through their discussions we learn that Ryan lost her YOUNG DAUGHTER in a freak accident (she died suddenly on the playground at school when she randomly slipped and fell). Ryan has been haunted by this tragedy her whole life and it has prevented her from moving on emotionally and personally.
— Matt never knew this about her and feels closer and more personal with this once distant medical engineer. Matt opens up about his personal relationships and how he feels that he never committed to anyone.
— Matt and Ryan continue working their way to the Explorer…

Fun and Games:
— When they arrive at the Explorer, all they see is devastation. More ASTRONAUTS are found dead. And the shuttle is useless. It’s damaged beyond repair and won’t be able to return them home safely.
— Matt gets a new idea: they can use their thruster packs to make their way to a nearby International Space Station (ISS). Matt also warns Ryan that they have about 90 minutes (Blake’s “ticking clock” could hardly be more tangible!) before the debris could complete another orbit and threaten their lives again.
— Matt and Ryan, using their jet packs, make their way to the ISS.
— When they arrive at the ISS, they realize the crewmembers have evacuated using Soyuz modules and in doing so, a rescue parachute has deployed on one of the modules. As a result, this module will not be able to get them back to earth safely, though it might have enough force to propel them to another space station, this one of Chinese origin, called the Tiangong.
— Matt and Ryan propel themselves towards the module; however, Ryan gets caught in the rescue parachute lines. Matt tries to help her become untangled but in doing so, gets pulled back into space. Matt no longer has jet propulsion in his pack and is helpless.
— Ryan grabs him. She refuses to let go. And again, Matt reiterates the theme of our movie, “You’ve got to learn to let go… Learn to let go…”
— Matt tells Ryan that if she doesn’t let go of him they will both be pulled into space and will both die. Ryan must decide…

Midpoint:
— Matt recognizes Ryan might never let go and takes the decision out of Ryan’s hands — literally — as he disconnects the tether and drifts into space.
— As Matt floats away, he radios in more information to Ryan. She must use the ISS module to get to the Chinese space shuttle. This is her only hope of survival, and it must happen quickly, as the debris might strike again soon.

Bad Guys Close In:
— Ryan doesn’t have much time. She jumps into the ISS module and must find her way to the Chinese space shuttle.
— Running out of oxygen and time, Ryan frantically crawls through the module.
— It’s not safe. A wire shortage has sparked a fire, which quickly spreads.
— Ryan detaches the section of the module that is aflame and using her technical knowledge, maneuvers the module and untangles it from the parachute strings.
— Just as Ryan breaks free, the orbiting debris returns and destroys the rest of the ISS.
— Ryan is ready to propel to the Chinese Space Shuttle just as Matt had instructed her, when she realizes the module is out of fuel. Ryan has no way of getting to the Chinese Space Shuttle…

All Is Lost:
— The module has no fuel.
— Ryan is stuck and has no way of getting to the Chinese Space Shuttle.
— She’s alone and when she tries to radio Matt there’s no response.
— Ryan is convinced this is it and she will die alone in the module.

Dark Night of the Soul:
— Ryan turns down the oxygen reserves. She is going to die. There’s no way of saving herself. And by depleting the rest of the oxygen reserves, this will be her way of killing herself peacefully.
— Ryan says her good-byes to her DAUGHTER that she lost years ago. Ryan hopes that she will be reunited with her daughter in the afterlife.
— There’s a KNOCK on the space shuttle. Looking over, we see MATT KOWALSKI. He climbs inside the module and has never been happier. Matt even offers Ryan some vodka for their trip home.
— Matt tells Ryan that everything is going to be okay. She doesn’t need fuel in the module to get home. They can use the landing propulsion to get back, and that should be enough force to bring them home safely.
— Matt smiles at Ryan and offers her some more vodka. And then disappears. That’s right. Running out of oxygen and filled with emotional distress, Ryan was hallucinating Matt’s presence.
— However, Ryan listens to Matt’s (imagined) words. He has challenged her to survive. And told her that if she’s going to give up, he will be disappointed. It’s up to her. She can survive if she wants to…

Break into Three:
— Ryan doesn’t want to die.
— She turns the oxygen reserve back on. And taking Matt’s advice, will use the module’s landing propulsion to fight her way back to earth.
— Ryan reads the manual on how to use the landing propulsion.
— Ryan maintains focus and courage while she begins her journey home…

Finale:
— Using everything that Matt has taught her and all of the knowledge and courage that she has gained along her journey… Ryan must complete her final task… that of getting home!
— The module launches… And…
— Fighting through the atmosphere…
— The module flames its way home…
— Just as it looks like it’s not going to make it or could erupt into a fire from all of the heat and pressure…
— The module appears in the earth’s sky…
— And comes crashing down into a water reserve.
— We don’t know where we are right now…
— Ryan is submerged in water, and must fight her way out of the module and to the surface…
— And she does… GASPING for breath. She has arrived. She is safe. She is back on earth.

Final Image:
— Ryan swims to land.
— Ryan slowly stands. She is shaking. And shivering. But she’s alive.
— And looking up…
— Our FINAL IMAGE (and the complete opposite of the Opening Image—where we were in space looking down on earth)… Ryan is now on earth… and looks upward… to SPACE.

FADE OUT. THE END.