This week’s beat sheet was created by Los Angeles Cat Naomi Beaty. Naomi’s been a long time Cat! offering her wisdom and insights during the development of books 2 & 3, as well as her past experiences in development at Maverick Films. Thanks, Naomi!

“Precious: Based on the Novel ‘Push’ by Sapphire” is, without a doubt, the surprise hit of this year’s Oscar season. Adapted from the novel by screenwriter Geoffrey Fletcher, and filmed for $10 million, this is not your typical Hollywood film — and we couldn’t be happier. Let’s see how it resonates when we beat it out!

Opening Image: In a fairytale-esque fantasy scene, we meet Precious.  A gift is bestowed upon her by a kind, older woman. This is immediately juxtaposed with scenes of Precious’s real life…

Theme Stated: Precious isolates herself in the back of an overcrowded, inner-city classroom. In a voice-over she says, “I don’t say nothing… Everyday I tell myself, ‘Something’s going to happen. I’m going to break through. Or someone’s going to break through to me. I’m going to be normal. And pay attention. And sit at the front of the class. Someday.” Will she learn that only by speaking up and speaking out? Will she ever get what she wants and needs? This movie is about finding your voice.

chaos. Her life is a study in oppression and cruelty, but she escapes to her fantasies and dreams of other possibilities for herself.

Precious is called out of math class and sent to the principal’s office. The principal reveals what Precious already knows: she’s pregnant. In an effort to help, the principal tries to find out “what’s going on at home,” but Precious refuses to talk about it, even when faced with expulsion. She protests the punishment, insisting she’s a good student. At home, Precious’s mother Mary barks, “You got my cigarettes?”

Mary is a Welfare queen who spends her life in front of the TV and abuses Precious verbally, physically, and sexually, while demanding Precious wait on her hand and foot. When Mary throws something at Precious’s head, Precious flashes back to a memory in which she is raped by her father. Within the flashback we see that during the trauma she escapes to a fantasy — herself, fabulous and adored, at a movie premiere. This is a running occurrence we’ll see throughout the course of the movie — when Precious is being abused, or life is too much to bear, she escapes to fantasy.

Catalyst: The principal shows up at Precious’s apartment building. Even though Precious refuses her entrance, the principal delivers the name and address of an alternative school. Now it’s up to Precious to attend — or not.

Debate: Mary berates Precious for “opening her mouth,” insisting that’s what brought the principal to her door. She threatens that Precious better not screw up Mary’s Welfare checks. And she should go to the Welfare office rather than the alternative school because she’s “too dumb to learn anything.”

Break into Two: The next day, Precious does indeed show up at the alternative school. The administrator explains what an

alternative is: “It’s a choice. A different way of doing things.” This sounds pretty good to Precious. But she has a minor setback when she scores too low on the placement tests to be eligible for the GED program.

It’s more abuse at home, and the next day Precious goes back again to the alternative school and meets…

B-Story: … Ms. Rain, the literacy teacher who will be her guiding light.

Fun & Games: Precious also meets the other girls in her class who, unlike her mother and any other examples in her neighborhood, are striving to make better lives for themselves. Precious even feels comfortable enough to speak up in class — a first, as she explains to her teacher. Ms. Rain asks her how that feels. “Here. It makes me feel here,” is her response. Precious is finally present and facing her life.

Later, Ms. Rain evaluates her reading level and, while the shame makes Precious want to escape to another fantasy, she fights the urge, stays in the moment — and begins to learn how to read.

Back at home, there is more cruelty as Mary accuses Precious of lying about her whereabouts and screwing up Welfare. She demands Precious cook her food and then rejects it, forcing Precious to eat it.

Midpoint: As instructed, Precious meets with a Welfare counselor the next day. She inadvertently tells her about bearing a child by her own father. The family refers to the child as “Mongo” — short for mongoloid — because the girl has Down’s Syndrome, and lives with Precious’s grandmother. Now that Precious has started talking, she cannot — nor wants — to stop. As she leaves the office, her voice-over tells us, “That’s the end of the Welfare checks. I couldn’t lie no more.”

Bad Guys Close In: The “Bad Guy” element in this movie is the temptation to hold on to the familiar old life, ostensibly repeating its patterns. Even while Precious continues to grow and learn with Ms. Rain and the girls, feeling love from them and making plans to teach her baby “everything” — to read to it, and to love it, she’s still living at home in the same old environment. When Precious gives birth to a healthy baby boy, Ms. Rain does her best to persuade Precious to put herself first and consider giving up her kids for adoption. But Precious wants to keep her baby, insisting, “Welfare will help me.”

To which Ms. Rain responds, “Ask yourself how much Welfare has helped your mother.”

It’s clear Precious can’t have both the life she’s always known and the new life she wants for herself. The choice might not have been forced yet, but she’s not going to be able to keep one foot in each camp forever.

During a brief respite during her hospital stay, Precious feels the love and support of her classmates. She writes daily letters back and forth to Ms. Rain about her plans for the future, and makes a new friend in Nurse John; eventually, Precious leaves the safety of the hospital with her newborn son, and  returns home to face her mother’s “welcome.” Eerily devoid of emotion, Mary asks to hold the baby, and pronounces that “he look like his daddy.” When Mary discards the infant — like a tossed pillow — onto the sofa, she and Precious come to blows. Mary accuses Precious of stealing her man and ruining her life: costing her Welfare by “running her mouth.” Precious counters that she was raped, but her mother scoffs at the claim. Precious attempts to escape with the baby, only to fall down the stairs and have Mary throw the TV down after her.

All Is Lost: Broke and homeless with a newborn, Precious breaks into her school, and is found the next morning by Ms. Rain. Even with Ms. Rain’s help, it’s nearly impossible to find a shelter to take them. 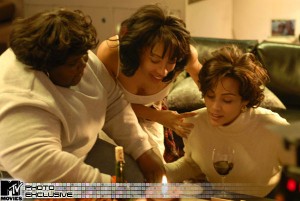 Dark Night of the Soul: Precious and the infant stay at Ms. Rain’s home, where Precious discovers that Ms. Rain is a lesbian. In voice-over Precious marvels that her mother always told her “homos” were bad, but as she recalls all the people in her life — those that were bad and those that were good — Ms. Rain and her partner have been the nicest to her of anyone, nicer than her own family. She realizes just how wrong everything she’s believed has been. It’s a symbolic death of her old notions.

Gathering courage and the resources to push into the third act, Precious wins a literacy award and the class throws her a party. Ms. Rain confides in Precious about her own strained relationship with her mother. Precious’s voice-over tells us, “Some folks got a light around them that shines for other people. I think maybe some of them was in a tunnel, and in that tunnel maybe the only light they had was inside of them. And then, even long after they escaped that tunnel, they still shine for everybody else. That’s Ms. Rain to me.”

Break into Three: Precious lives in a halfway house with her son and vows to get Mongo back. She explains the definition of a halfway house is that “it’s half way between where you came from and where you want to be.” And she knows she must keep going.

But then, she’s visited by Mary, who brings the news that her father is dead. And even worse, he had AIDS. Precious is tested and finds out that she, too, is HIV positive.

In class, Precious can’t bring herself to write anything. She lashes out at Ms. Rain when she urges Precious to keep speaking out, if not for herself then for all the people who love her. Through tears, Precious talks about what “love” has done for her: beat her, raped her, called her an animal, made her feel worthless, given her AIDS. Ms. Rain tells her that’s not love; her baby loves her, and Ms. Rain loves her. And this is what Precious must accept — love doesn’t always come from where you expect it to, but if you speak up it will find you.

We see her assess her options for the future. She attends incest survivor meetings, and bestows the gift from the very first scene to another neighborhood girl, a younger version of herself. She’s learned that there’s a different way of doing things; you can choose to pass on kindness rather than cruelty.

Finale: One last confrontation is necessary for Precious to become an independent, empowered woman. Precious meets with Mary at the office of the Welfare counselor, who asks Mary for details about the abuse that Precious experienced. Mary avoids the questions, going off on tangents, until she finally explains how she justified doing and saying nothing while her boyfriend abused her daughter: she was trying to keep him around. She didn’t speak up, and she not only lost him, but she eventually lost her daughter as well.

Having heard the story in her mother’s own words for the first time, Precious tells her mother that she finally realizes what she is — and that she’ll never see her again.

Final Image: Precious leaves, no longer isolated and no longer silent. She will be the mother to her children, the mother that she never had. She goes forth to create her own family.

And the Nominees Are...