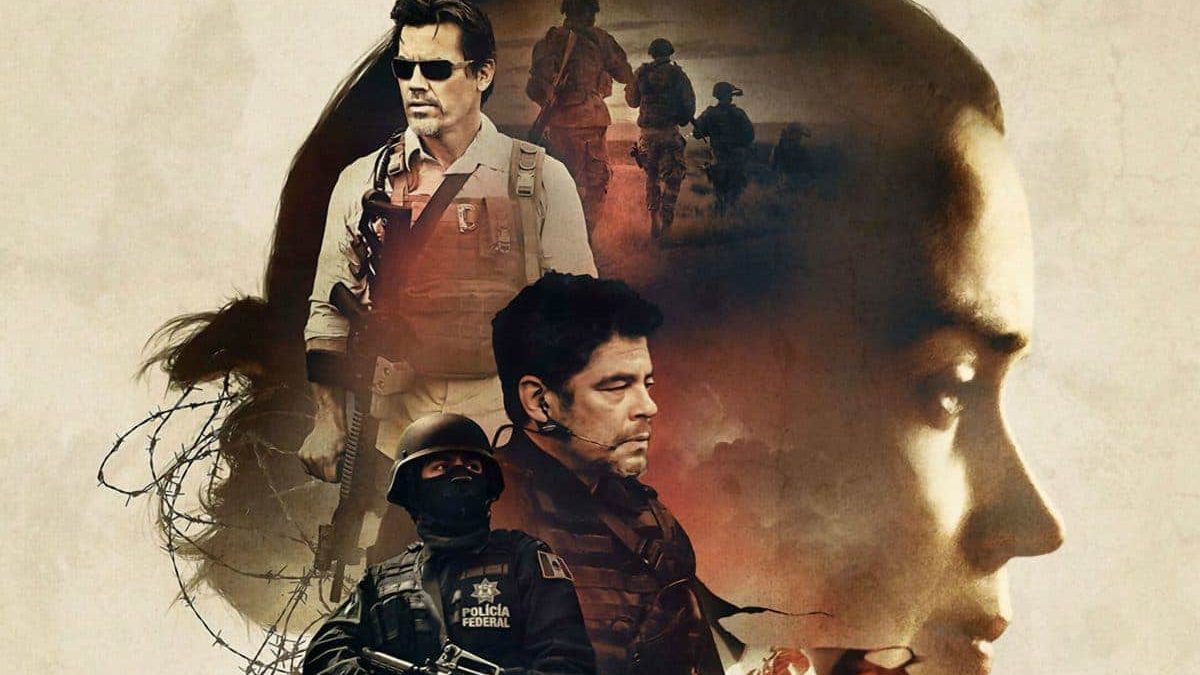 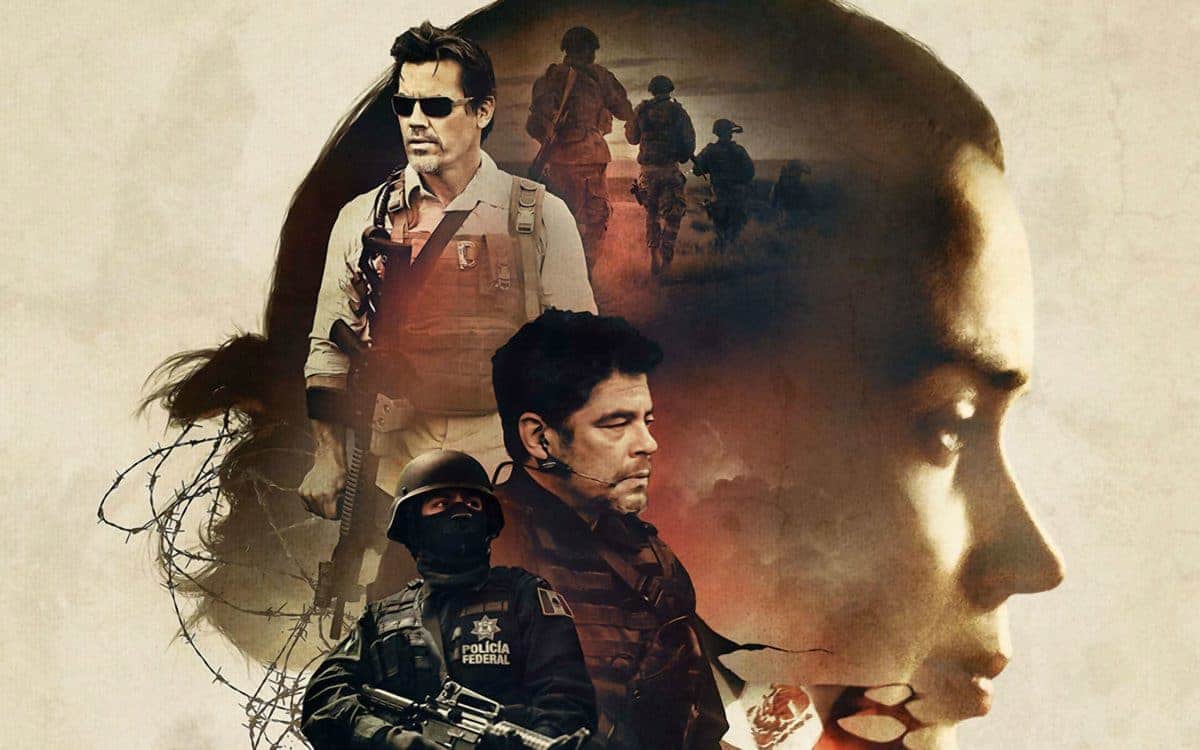 Opening Image: The first thing we see is a definition of “Sicario”: in Mexico, it refers to a hitman.

The movie does a great job of offering information, and then giving the audience room to put the pieces together rather than spoon-feeding us. We’re given this definition, but nothing else needs to be said about it right now.

They make a gruesome discovery: dozens of decaying corpses hidden in the walls. As they’re processing this find, a booby-trapped shed explodes, killing two officers.

Catalyst: Following the raid, Kate is called in to meet with her boss, Dave Jennings (Victor Garber), and a table of other men she doesn’t recognize.

Theme Stated: At first, while waiting outside the meeting room with Reggie, he asks her: “We did this by the book, right?”

And this simple statement speaks to the theme the movie explores. The question of right and wrong, the good guys versus the bad guys… and how any war, this one in particular, can’t possibly be reduced in that manner.

Debate (12-25): Kate readily volunteered for the task force – she wants to catch the men responsible for killing two officers on her watch. But as the Debate section continues, she begins to question that choice, and what the task force is really up to.

On a plane to El Paso, she meets Alejandro (Benicio Del Toro), who appears well-versed in the world of the cartels, but whose exact role and specialty are left undefined for Kate.

At Luke Air Force Base, they join U.S. Marshals, DEA agents, and Delta Force operators for a pre-mission briefing. Kate is surprised to learn they’re traveling to Juárez, Mexico to extradite one of Diaz’s top men, Guillermo (Edgar Arreola).

Kate’s having serious second thoughts, telling Matt, “I just want to know what I’m getting into.” Without explaining much, he reminds her that this is the fight she chose. If she wants to fight the good fight, this is where they start. Does she want to continue?

Break into Two: The team travels to Juarez and we feel the mood shift – while these American law enforcement professionals are accustomed to facing danger in the line of duty, in Juarez, the threat of danger is everywhere, permeating every facet of life.

B Story: The B-Story belongs to Alejandro, our mysterious “Company Man” in this Institutionalized tale. Who is he? What role does he play? The answers to those questions are parsed out slowly, and reinforce the theme of the story.

Fun and Games: The return border crossing is the likeliest spot for an attack and indeed – in perhaps the most tense movie sequence ever – as the team crosses the Bridge of the Americas, they are ambushed by cartel gunmen.

The team swiftly kills the gunmen and makes it safely back to El Paso. Rattled by the experience, Kate explodes at Matt for dragging her into a mission that she suspects isn’t on the level. He tells her: “Learn. That’s why you’re here.”

Later, unseen by Kate, Matt, and Alejandro torture Guillermo, learning of a cartel tunnel used by Díaz to smuggle drugs into the U.S.

Kate, Matt, Alejandro, and now Reggie, too, travel to an Arizona Border Patrol station to question detained illegal immigrants for information about a tunnel border crossing used by the cartels.

With Reggie back at her side, he and Kate confront Matt again; they want to know what the plan is, or they walk.

Matt explains the objective is to disrupt Díaz’s drug operations so that Díaz will be summoned back to Mexico by his cartel boss, elusive drug lord Fausto Alarcón.

Midpoint: The team raids a bank used by Díaz’s money launderers. Despite Matt’s warnings not to pursue it, Kate gathers enough evidence to obtain arrest warrants. But Matt refuses; he’s sticking to his plan.

Bad Guys Close In: Kate presses the issue with her boss, Jennings, but is overruled. He tells her to follow Matt’s lead, and: “If your fear is operating out of bounds, I’m telling you – you are not. The boundary has been moved.” Whether she likes it or not, they must use different tactics to fight this war.

Frustrated and needing to blow off steam, Kate and Reggie go to a bar. Kate meets local off-duty cop, Ted (Jon Bernthal), and the two flirt and dance, finally ending up back at Kate’s apartment.

All seems to be going well… until she notices a clue that ties him to the laundered money they discovered earlier. The mood turns and suddenly they’re fighting hand-to-hand. Ted overpowers Kate, choking her – until suddenly, Alejandro is there with a gun on Ted. He knew the cartel would send someone after her.

In the aftermath, Kate learns this is why Matt warned her not to go in the bank. She made herself a target, “used herself as bait.”

Alejandro and Matt “question” Ted to gather information on other corrupt cops. Later, Kate thanks Alejandro for saving her. He tells her she reminds him of someone very special to him. There’s more to that story, but this is a movie where information is doled out on a need-to-know basis, and now is not the time to reveal the rest of Alejandro’s backstory.

The next morning, Díaz is called back to Mexico to meet with Alarcón.

All Is Lost: As the team prepares for their operation, Kate argues that the FBI has no jurisdiction in Mexico. Matt dismisses her and Reggie, admitting that he’s been using her all along for the legal permission her presence provides the CIA to operate within the U.S.

Dark Night of the Soul: From hotshot team leader to completely irrelevant, Kate faces her low point. Reggie wants to walk but Kate insists on staying on the team, telling Reggie she “needs to know what they used us for.” She cannot make the choice this story requires until she has the full picture.

The special ops soldiers on this mission make it clear that Kate and Reggie are not welcome. Still, they join the raid as we hear Matt tell the others the Rules of Engagement: “weapons free.” Anything goes in this battle.

Break into Three: Into the tunnel. It’s gunfire and chaos, as planned – they’re creating a diversion so that Alejandro can sneak into Mexico undetected.

On the other side, he kidnaps one of Díaz’s mules, a corrupt Mexican police officer named Silvio (Maximiliano Hernandez). Kate attempts to arrest Alejandro, who disables her by shooting into her bulletproof vest before driving off with Silvio in his police cruiser.

Finale: Kate confronts Matt about the entire operation. Matt explains that Alejandro, who is working with the rival Medellín Cartel, has been hired to assassinate Alarcón. Finally, we learn who our Sicario is. Further, Alejandro is driven by the need to avenge his wife and daughter’s murders at the hands of Alarcon’s cartel.

In Mexico, Alejandro carries out his hit, killing Alarcon and his family at their dinner table.

The next morning, Alejandro appears in Kate’s apartment and orders her to sign a waiver legitimizing the entire operation. She refuses. But Alejandro holds his gun to her, “You would be committing suicide, Kate.”

She resists as long as she can, but finally signs the waiver. Alejandro tells her she should move to a small town, “You will not survive here. You are not a wolf, and this is a land of wolves now.”

Alejandro leaves. As he walks away, she aims her pistol at him from her balcony. Alejandro stops and faces Kate, but she is unable to pull the trigger, and he leaves.

He’s right: she’s not made for this institution, which is closing in faster than they can fight it back.

Final Image: Back in Mexico, Silvio’s widow takes their son to his soccer game. The game is briefly interrupted by the sound of gunfire before continuing as if nothing had happened.

The All Is Lost Beat Test