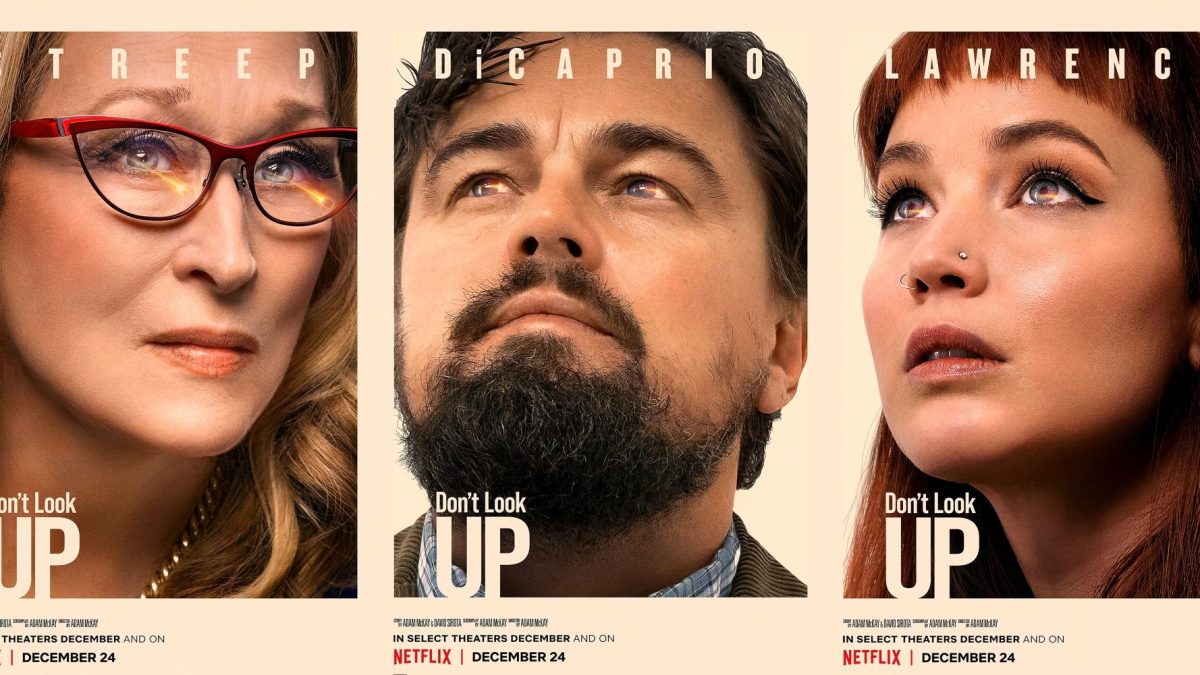 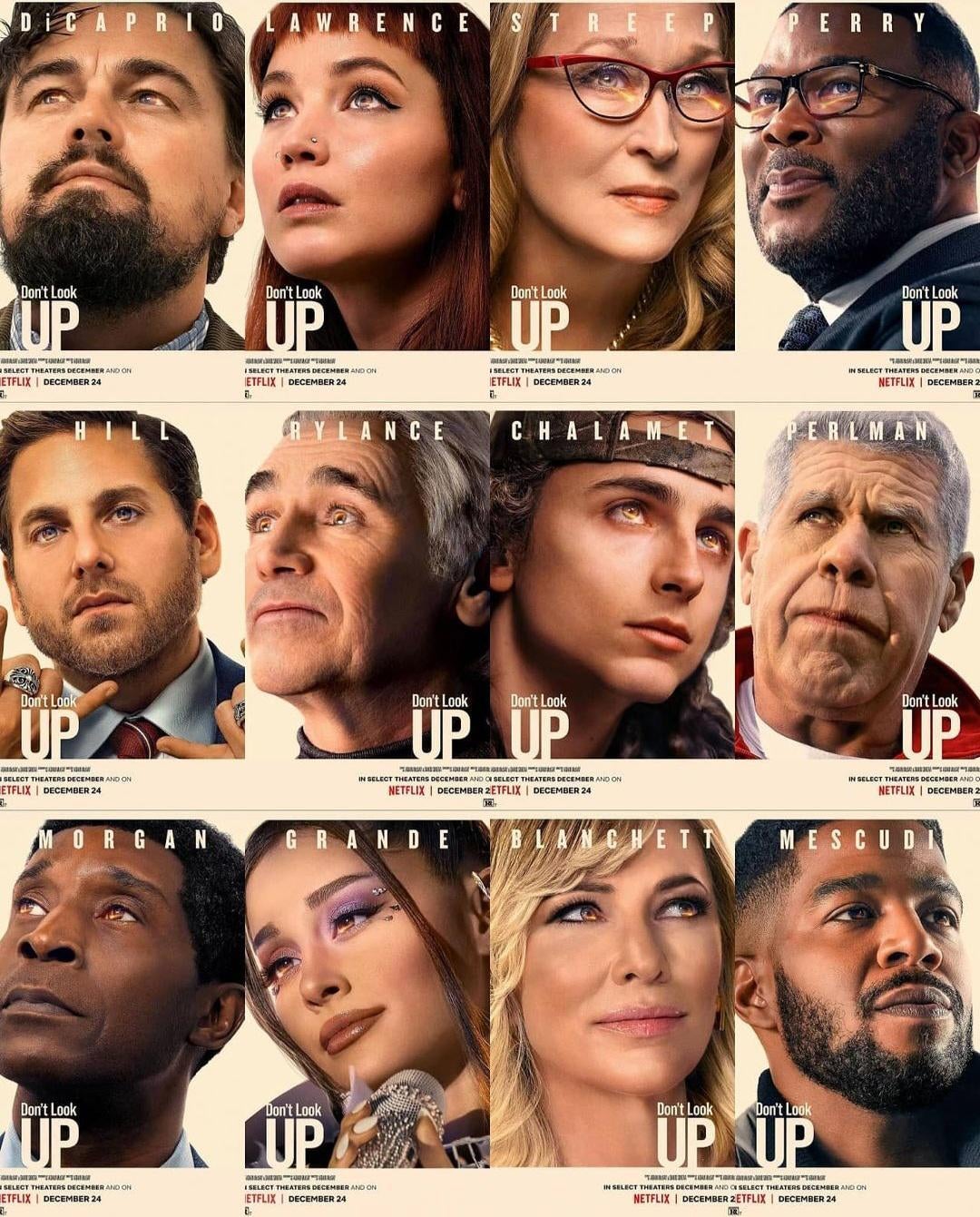 Announced in November 2019, Don’t Look Up began shooting during the pandemic a year later, was released theatrically on December 10, 2021, and started streaming on Netflix on December 24th. The comedic satire is spiritual cousins with Dr. Strangelove (1964), Network (1976), Wag the Dog (1997), and Idiocracy (2006). The film became one the streaming app’s most watched films, and was polarized between critics who found it “smug” and audiences who seemed to enjoy the fatalistic humor.

Genre cousins: Deep Impact, Contagion, Outbreak, The Stand, The Poseidon Adventure, The Impossible, The Martian, 1917, Armageddon, Meteor, The Day After, Earthquake, Dante’s Peak, The Towering Inferno, The Day After Tomorrow, Panic in Year Zero, The Day of the Triffids

Set-Up: Dr. Randall Mindy (Leonardo DiCaprio) calculates that “Comet Dibiasky,” which is five to ten kilometers wide, will strike the Earth in a little over six months. These are two innocent heroes who are reacting to this sudden event, in true DWAP fashion. Mindy and Dibiasky confirm their discovery with Dr. Calder (Hettienne Park), head of NASA, and Dr. Teddy Oglethorpe (Rob Morgan) at NASA’s Planetary Defense Coordination Office…

Theme Stated: … and Mindy determines that it’s an extinction-level event, which is the life and death (the third Dude with a Problem element) leading to the movie’s theme: learning what’s truly important in life.

Catalyst: Dr. Mindy and Dibiasky are sent to the White House to brief the president.

Debate: After a long delay waiting outside the Oval Office, they report their findings to distracted President Janie Orlean (Meryl Streep) and obnoxious Chief of State Jason Orlean (Jonah Hill), her son. The uninterested president only cares about her midterms, and is in full crisis mode over a sex scandal, so she orders them to “sit tight and assess.”

Break into Two: Dr. Oglethorpe suggests that Dr. Mindy and Dibiasky leak the story to the press. They go to the New York Herald. And they’re booked on a popular TV show, The Daily Rip.

B Story: During the show with hosts Brie Evantee (Cate Blanchett) and Jack Bremmer (Tyler Perry), Dr. Mindy is framed as the hunky A.I.L.F. and Brie invites him for drinks later, which will culminate into a fully blown sex affair. Entering this new, upside-down world of glitz, family man Dr. Mindy will learn what’s important in life as death approaches.

Fun and Games: The scientists don’t get any response from the media, too busy covering the recent breakup between flaky music sensation Riley Bina (Ariana Grande) and her boyfriend, DJ Chello (Scott Mescudi). After their appearances on The Daily Rip, Dibiasky emerges on social media as an overemotional psycho and the astrophysicist doctor, a hunk. Later, Dr. Mindy, Dibiasky, and Dr. Oglethorpe are arrested by the FBI.

To divert a sex scandal about her Supreme Court nominee that she’s involved with, President Orlean issues the scientists a presidential apology and will finally do something about the approaching comet. They need someone to take the fall for not acting sooner, so NASA’s Dr. Calder, an Orlean supporter with no actual science background, resigns. The president makes the announcement and it goes wide. She’s tops in the polls. Dr. Mindy becomes a celebrity.

Midpoint: False Victory. President Orlean launches a project to strike and divert Comet Dibiasky using nuclear weapons, raising the stakes. She hires the “face” of the mission, cantankerous Colonel Drask (Ron Perlman), as the clock ticks and the countdown begins. Dr. Mindy begins his extra-marital affair with Brie Evantee, tying A and B Stories together.

Bad Guys Close In: The mission launch is a success—it seems that the world will be saved! However, President Orlean aborts when Billionaire Peter Isherwell (Mark Rylance), CEO of tech company BASH, and a top donor, discovers that the comet contains 140 trillion dollars’ worth of rare-earth elements. The government agrees to fragment the comet in 30 smaller meteoroids using Isherwell’s new tech proposed by BASH’s Nobel Laureates, despite the fact that it has not received scholarly peer review. Dr. Mindy is hired as the National Science Advisor as the “voice of reason” to advocate the comet’s capitalistic opportunities, as Dibiasky and Dr. Oglethorpe are benched.

All Is Lost: Dr. Mindy, Dibiasky, and Dr. Oglethorpe discuss the reality in a pub. Dibiasky has another outburst and tells the concerned patrons the truth. Rioting and looting begins. She’s taken “off the grid” by the FBI. Dr. Oglethorpe leaves Dr. Mindy due to his not acting responsibly. The astrophysicist’s extra-marital relationship comes crashing down when his wife, June Mindy (Melanie Lynskey), confronts him with Evantee in a hotel room. There’s a whiff of death as Dr. Mindy is losing his soul to those who matter most to him.

Dark Night of the Soul: Dibiasky’s media ex-boyfriend, Philip Kaj (Himesh Patel), is running a smear campaign against her to capitalize off her doomspeak notoriety. She’s now working in a convenience store and meets Yule (Timothée Chalamet) and his shoplifting skater posse. There’s already 23% of the population, and rising, who believe that the comet is a hoax, and conspiracy theories abound on conservative cable shows.

Dr. Mindy checks out the BASH drones to be launched at the comet. He offends Isherwell by asking him about the success of the mission and if it just simply isn’t a business opportunity. Dr. Mindy appears on The Daily Rip again, and in a moment of clarity, has an angry outburst that criticizes Orlean and her administration that mirrors Dibiasky’s earlier diatribe. The FBI take him “off the grid” and Evantee breaks up with him. With 25 days left until the comet strikes the Earth, Dibiasky and Mindy, on separate occasions, spot it approaching in the sky. The sightings confirm all that the scientists were saying was true.

Break into Three: With visual proof, Dr. Mindy, Dibiasky, and Oglethorpe run a campaign to get people to “Just Look Up,” and against Orlean and Isherwell. The astrophysicist is also trying to mend his relationship with June Mindy, which ties A and B stories.

Gathering the Team: A line is metaphorically drawn in the sand—the pro-science “Just Look Up” people on one side of the political spectrum, and President Orleans’ “Don’t Look Up,” which ignores facts and claims that what the scientists are doing is keeping people in fear.

Executing the Plan: President Orlean and Isherwell’s BASH cut China, Russia, and India out of the comet-mining deal. They launch a counter-deflection mission but fail. It’s now all counting on…

High Tower Surprise: BASH launches the mission to turn Comet Dibiasky into 30 meteoroids. Of course, since it wasn’t tested and peer reviewed, it fails.

Dig, Down Deep: Dr. Mindy returns to his home in Lansing, Michigan with Dibiasky and Yule. He mends things with his wife. Dr. Oglethorpe shows up. And they have a heart-to-heart last supper. They celebrate the final night on Earth the way we all hope to—surrounded by those we love. It’s what matters, it’s what makes our lives worth living. Isherwell had prophesized to Mindy that he would die alone, but that didn’t come true as he shunned the elite lifestyle and returned to the ones who truly care about him. In a strange way, he escapes a previous fate and dies happy, tying A and B stories together for the last time.

Executing the New Plan: With the BASH launch failing, President Olean joins Isherwell in a BASH “space ark” with a bunch of other rich elites. She calls Dr. Mindy, telling him there’s room for him and Evantee, or his wife. He declines. He has everything he’s ever needed. Orlean forgets to include her son Jason among the 2,000 that will rocket away from the planet. Comet Dibiasky strikes Earth, and as promised, everyone perishes.

Final Image: On the other side of the galaxy, 22,740 years later, the BASH “space ark” lands on a lush planet with an Earth-like atmosphere. President Orlean is one of the first off the vessel and is immediately eaten by a Dodo-like Bronteroc creature. The meat-eating creatures swarm Earth’s last survivors—it seems that no one escaped their inevitable fate.

Post-credits: Jason Orlean climbs out of the rubble—The Last Man on Earth, as he poses for a selfie to upload to his social media.