All Is Lost Beat Sheet 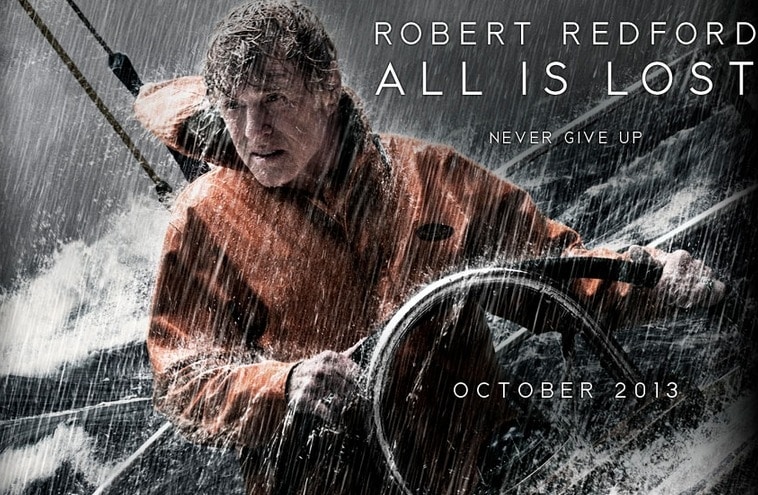 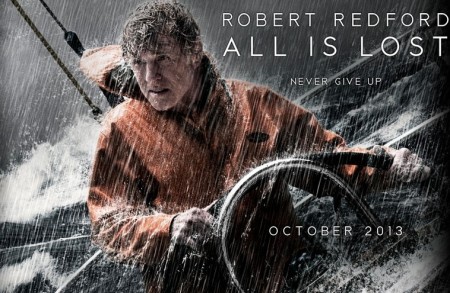 Thanks to Master Cat! Ben Frahm for this breakdown that was certain to include the “All Is Lost” beat (but does not include a B Story):

Written and Directed by: J.C. Chandor

Opening Image:
The remains of a capsized boat float in the ocean.

Set-Up: Via narration (Robert Redford VO) we learn:
— A Man has been on a boat for eight days.
— He’s in the middle of the ocean.
— He’s alone.
— And per the tone of his voice, he doesn’t think he’s going to survive.

Theme Stated:
“I tried, I tried… I fought ‘til the end, I’m not sure what that is worth, but know that I did.”

Catalyst:
— Our Man (Redford) wakes up. He’s on a boat. And water seeps into the cabin.
— Further investigation reveals a hole in the boat.

Debate:
— What should he do? What are the implications and severity of this problem? Our hero must act quickly…
— He discovers that his boat must have sailed into a corrugated metal shipping container and this is what caused the gaping hole.
— Our Man uses a flotation device with ropes to dislodge his boat away from the metal container.
— And acting with skill and grace…

Break into Two:
…He repairs the hole.

Fun and Games: A Story and Second Act Goal: simply to survive and get help.
— The Man rescues a radio from the cabin. It’s wet with salt water and currently doesn’t work. He cleans the device with fresh water. And now must let it dry.
— A skilled sailor, Our Man wastes no time. He checks the repaired hole in the boat.
— Empties water from the cabin.
— Recovers food and drink to keep healthy and strong.
— And the next day, to his surprise the radio works. Or at least starts to work. A signal comes through and then quickly dies.
— Our man climbs the mast of the boat and tries to reconnect the electrical wires, hoping this will help. But it doesn’t…
— And looking in the distance, he notices a significant storm is now heading his way…

Midpoint:
— The storm comes that night.
— The weather and conditions are so severe that the boat capsizes.
— Our Man is tossed into the ocean. His head damaged. And now his only means of survival has been compromised.

Bad Guys Close In:
— Groggy and discombobulated from his head injury, Our Man gathers the energy to prepare the lifeboat and uses this to barely escape the storm.
— The next day, he returns to his demolished boat and recovers necessities. An emergency kit. Some personal belongings. Water. Medical supplies to fix his head. And a map and navigation device in order to determine his coordinates.
— Our Man realizes that he’s just south of a shipping route. And that if the ocean currents continue, he will pass through the route and hopefully be noticed and rescued by passing boats.
— However, in the meantime, he must endure another storm…
— … which passes through and capsizes his lifeboat.
— Some of his possessions are lost. And the next day, he realizes that his only fresh water supply has been contaminated with salt water.
— Staying calm and collected, Our Man refuses to give up. Instead, he constructs a device to allow water condensation to be collected into a cup. This actually works and Our Man is able to drink some fresh water, albeit a very small amount.
— He checks the coordinates again on the map and realizes he’s currently in the shipping route.
— And sure enough, later that day, a cargo boat appears. Our Man frantically tries to signal for help using a flare from the emergency kit but this doesn’t work. The cargo ship never sees him and doesn’t stop to help.
— The next day, another boat appears. Our Man won’t let this one get away. And lights all of his flares, hoping to be noticed.
— But the result is the same. The boat doesn’t see him and passes right by.
— Our Man checks the map and realizes that he’s floated out of the “shipping route,” so his chances of encountering another boat are unlikely.
— He’s out of flares.
— He has no food or water.
— And it appears that Our Man is giving up.
— He writes a letter to his loved ones (most likely the one read as narration at the beginning of the film). And puts the letter in a jar and throws it into the water.
— It’s getting dark, and when Our Man lies down and appears to be completely giving up… he notices a light in the distance.
— On the horizon, there is potentially another boat.
— But he realizes he doesn’t have any flares left.
— So instead he lights some papers and manuals from the lifeboat on fire, a last resort of being discovered…
— However, the fire spreads… and quickly engulfs the life boat…

All Is Lost:
The lifeboat burns and Our Man is forced into the ocean…

Dark Night of the Soul:
— Without a boat…
— Without hope of rescue…
— Our Man gives up. He lets himself sink towards the bottom of the ocean…
— Staring at the still burning lifeboat on the water’s surface…
— We are convinced Our Man will die…
— Until, at the last moment, another light is noticed.
— It appears to be a rescue boat—that must have noticed Our Man’s burning lifeboat.
— The boat light approaches… — And just when it looks like Our Man is sinking into the abyss…
— He starts swimming towards the surface…

Break into Three:
Our Man refuses to die and using whatever energy he has left… frantically swims to the surface…

Finale:
— Struggling for breath and life, Our Man does everything he can to swim to the boat.
— This is his last chance of survival…
— And to our surprise, when Our Man reaches the surface…

Final Image:
… A HAND appears from the boat and grabs Our Man’s hand.
We QUICKLY FADE TO WHITE.
THE END.

[Editor Note: There is a spirited debate in the film community: Does Our Man truly survive… or has he accepted death? What do you think?]