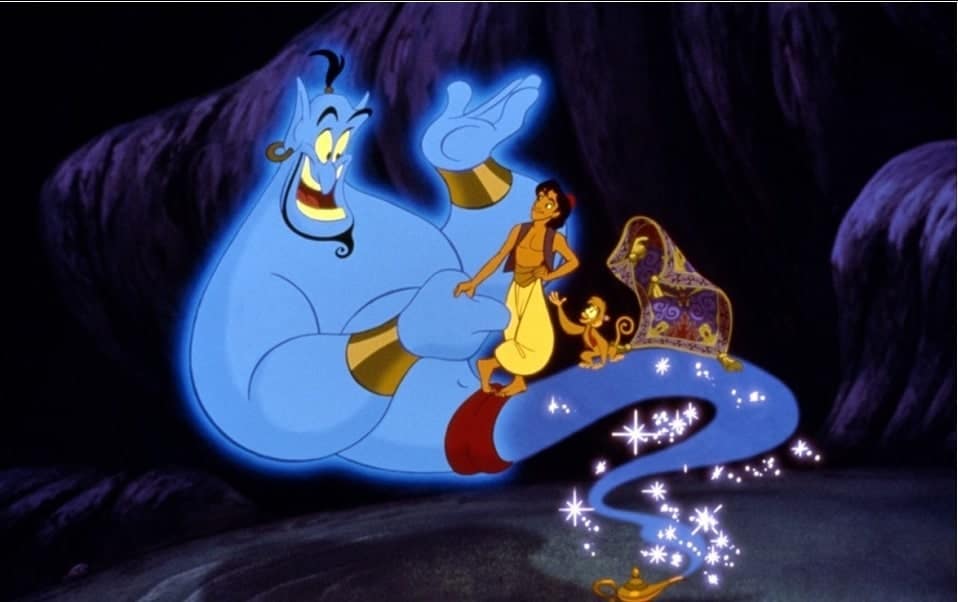 Aladdin meets the Genie, his guide into the upside-down world of Act 2.

Opening Image: The sands of the Middle East lead to a peddler on the outskirts of Agrabah.

Set-Up: The street peddler holds up a lamp, offering a tale about how it once changed a young man’s life, one who was more than what he seemed. Jafar (Jonathan Freeman), the Sultan’s adviser, meets with a thief in the desert as the two locate the Cave of Wonders. The thief is deemed unworthy to enter, and Jafar is told to find a Diamond in the Rough. In Agrabah, street urchin Aladdin (Scott Weinger) avoids the Sultan’s guards as he steals food to eat. In a Save the Cat! moment, Aladdin and his monkey Abu see some starving children and give them their bread rather than let them go hungry. This is Aladdin’s thesis world, one in which he is seen as nothing more than “riff-raff.”

Theme Stated: Aladdin laments the fact that everyone looks down on him as a mere “street rat,” admonishing that if they looked closer, they’d see that there is so much more to him. Deep down, people are more than what they seem, and Aladdin must accept who he is.

Set-Up (Continued): At the palace, Princess Jasmine (Linda Larkin) has rejected yet another suitor. She wants to marry for love, not for political position. The Sultan seeks Jafar’s advice, but instead Jafar hypnotizes the Sultan to get his diamond ring. Using it, Jafar discovers who the Diamond in the Rough is, the only one worthy to enter the Cave of Wonders: Aladdin.

Catalyst: Jasmine sneaks out of the palace and enters the Agrabah market in the morning. When she tries to give an apple to a hungry child, the street merchant threatens her. Aladdin steps in to aid her, earning her trust.

B Story: Aladdin’s relationship with Jasmine will drive his choices, helping him learn the theme and discover who he truly is.

Debate: Will this new girl like Aladdin for who he is? He rescues her and takes her to his ramshackle of a home, showing her the view of the palace. But the Sultan’s guards arrive and arrest Aladdin, finding the Princess in the process. Jafar imprisons Aladdin and tells Jasmine that he was executed for his crimes, dashing her hopes of true love. While in prison, a stranger (Jafar in disguise) helps Aladdin escape to find riches at the Cave of Wonders, a double bump to push him into the upside-down world of his journey. Will these riches help him win over the princess, making him worthy of her love?

Break into Two: Aladdin enters the cave and is told to touch nothing but the lamp.

Fun and Games: Aladdin finds a magic carpet and the lamp, but when Abu touches a gem, the cave seals them in. Jafar attempts to take the lamp and abandon Aladdin, but Abu steals it from him. Aladdin unleashes the Genie (Robin Williams), earning three wishes. After using the Genie’s powers to escape the cave, Aladdin wishes to be a prince in the hope of marrying Jasmine. In this Out of the Bottle story, this is Aladdin’s wish. He promises the Genie that once he earns Jasmine’s love, he will use the third wish to free the Genie. As Prince Ali, he arrives in Agrabah to great fanfare, ready to court Jasmine. The spell cast, this is his antithesis world, one in which he has the access to unlimited power and the ability to rise up and impress anyone, even the Princess. Jasmine is unimpressed with his display of greatness, but when he begins to display his more humble side, she becomes interested in him.

Midpoint: A and B Stories cross as Aladdin takes Jasmine on a magic carpet ride around the world, and in a false victory, Aladdin believes that for the first time in his life, everything is going his way. The stakes are raised, however, as he realizes that he is not telling her the truth about who he really is.

Bad Guys Close In: Jafar, intending to marry Jasmine himself, commands the guards to banish Aladdin, and they toss him in a body of water. Almost unconscious, his hand rubs the lamp, summoning the Genie. The Genie saves Aladdin’s life as a second wish, and Aladdin returns to the palace. Jafar sees the magic lamp and realizes who Prince Ali really is. Aladdin’s inner Bad Guys also plague him, as he struggles with telling Jasmine that he is not really a prince, realizing he must use the Genie to keep up this charade. As a result, he will not be able to honor his word of using the third wish to free the Genie. In his anger, he lashes out, further isolating himself from his friends. He cannot face the truth of who he is, and when Jafar’s parrot Iago steals the lamp, Aladdin’s world comes crashing down. Jafar uses the Genie’s power to become Sultan and a powerful sorcerer, revealing Aladdin’s true identity to Jasmine and her father.

All Is Lost: Jafar banishes Aladdin to a frozen land, far from Agrabah. The whiff of death is in the air as Aladdin realizes that Jafar will stop at nothing to gain total power.

Dark Night of the Soul: Aladdin learns the lesson and realizes that his lies were what got everyone into this mess, and he must come to terms with who he is. He must prove that he is not worthless.

Break into Three: As A and B Stories meet, Aladdin learns that he must save Jasmine by accepting who he is. Using the magic carpet, Aladdin and Abu race back to Agrabah.

Finale: Jafar has seized control, but Aladdin returns to confront him. This is his synthesis world, in which he stops pretending to be someone he is not, having gone through the Transformation Machine. At first, it seems that Jafar has the upper hand, turning into a giant snake and imprisoning Jasmine in an hour glass of sand. Aladdin digs deep down and uses the skills he learned on the streets, tricking Jafar into making a wish to be a genie as well. Jafar believes it will grant him unlimited power, but Aladdin knows that it will also imprison him in a lamp. Aladdin saves Jasmine and Agrabah, proving his worth. He uses his third and final wish to free the Genie, and the Sultan changes the law so that Jasmine can marry whomever she wants.

Final Image: Aladdin and Jasmine ride off into the moonlight on the magic carpet. They have found love together, and Aladdin has found his worth deep inside.

The Day of the Doctor Beat Sheet